On the road in London and Toronto

Recently, my family travelled to London, Ont., which allowed me once again to get a look at some railways outside of the Ottawa area. The weekend proved to be filled with a wide variety of railway scenes, including this shot taken from Highway 407. We were on our way home when we decided to take the northern bypass through Toronto, to avoid the 401. We were lucky to catch this long CN intermodal train heading east over the Humber River on the Halton Subdivision. The shot below shows you the mid-train DPU locomotive. We were a little too far off to identify the unit, but I think the shot has so many more interesting elements. This shot was taken by my wife from the passenger seat of our car as we made our way east on the 407.

I really thought the sky was the best feature of the shot. I worked with my photo program to convert this into a black and white shot, which I thought would work since the train was pretty far off and was bathed in shadow anyway. I like how this shot turned out as well.

Here's one final shot, where my wife zoomed in a bit to capture a bit more detail. Years after beginning to photograph trains again, I can now say I have captured a grand total of two DPUs in my travels (well, my wife has, but I was there!). Considering how little time I have to actually see trains, I think this marks some progress.

While in London, I had a little bit of time to sit trackside and am happy to report that I did see some action on Canadian Pacific's Galt Subdivision, which goes through London. I will share those photos and observations in an upcoming post. But, I thought I would share a few more general observations about London.

Here's a piece of trivia to start. Do you know which Via Rail station is the fourth busiest in Canada after Toronto, Montreal and Ottawa? Yup, it's London. On a way to a wedding through the city, I snapped a quick photo of London's downtown train station, which is quite a good looking structure, especially compared to the institutional and sterile station that it replaced. After seeing some of the other Via Rail stations that have been built in Ontario recently, I have to say this one is probably my favourite. From the outside at least, it's a good mix of a modern train station and a classic rail station. If you look closely to the right of the shot, you can see some beautiful Via Rail streamliners parked and ready for their next run. 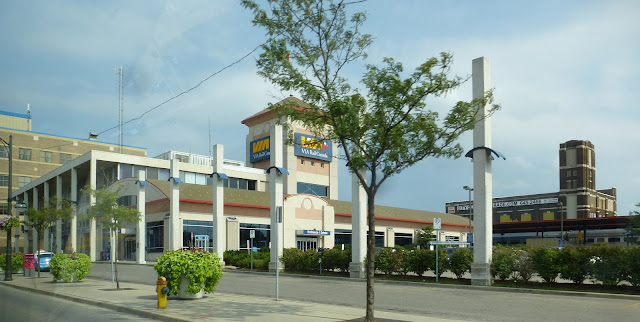 I couldn't help but notice that, unlike Ottawa, London's busiest rail lines are not all sealed off from the city's major arteries. Many busy roads, including downtown roads, intersect with railway tracks at level crossings.

The city is served by Canadian National, Canadian Pacific and the Goderich Exeter Railway, not to mention Via Rail. This makes London a great place to see trains, if not the most convenient city to get around in when a train comes through. And make no mistake, this is a busy railway town. The trains that make their way through the city are long.

London has lost a great deal of its manufacturing and production in recent years, including the old GM Diesel, McCormicks and Kellogg's plants, to name a few. As we drove through some industrial parts of the city, I noticed a fair bit of trackage snaking its way through old rail served plants, but I couldn't see a whole lot of places that appeared to be using local rail service. Of course, there are still a number of rail-served customers in the city, but it's obvious that much of the railway action you will see in this city will be long haul freights making their way between Toronto and Chicago or Toronto and Windsor/Detroit.

For a railfan, this city offers a lot. There are a number of level crossings, rail flyovers, embankments and other features that give you lots of choice if you decide to do a little railfanning. Up until recently, you could even have dinner at the city's historic railway station on Richmond Row in the downtown, but the restaurant there just recently moved out. Still, the old station is worth the visit.

Stay tuned for some shots of my meet with a westbound CP freight, which produced a few surprises.

I like the black and white version the best, too.

I've never been to London (ON). I like that VIA station!

Thanks Steve. I would recommend a stay in that city if work ever takes you there. I'd venture to guess you wouldn't be disappointed. I see more London visits in my family's future, so I'm hopeful I can share more scenes from this city soon.