Toronto, Part I - The following post is the first of four I have put together to chronicle the various trains I saw on a recent trip to Toronto with my family in mid-March.

What do the 2010 Vancouver Olympics, the 2015 Pan-American Games and Canada's 150th anniversary have in common? Maybe the better question would be what should these three events
have in common? Well, in my opinion, they all should be good news for commuter rail. In the case of the Olympics and the Pan-Am Games, both host cities used their events to dramatically improve their commuter rail between their downtowns and their airports. Meanwhile in Ottawa, the potential to link Ottawa's downtown to the city's airport remains less than certain. And that's a shame. Especially considering that next year would be the ideal year to have this project done.

But, let's focus on the positive first. The Union Pearson Express (UP Express) is a rail service that connects Toronto's Pearson International Airport with the city's Union Station. The commuter trains make the connection in 25 minutes each way at intervals of 15 minutes. Without getting into the history of this rail line (there is quite a history), the most important element to highlight is that the service began operation last year in time for the Pan-American Games in Toronto. This is crucial, I think, because the UP Express is proof that, given a sense of urgency, we can find the political will to get important projects like this done. A world-class city needs a rail link between its airport and downtown. End of story.

I also referenced Vancouver. In the case of that city, its Sky Train commuter service was extended to the airport via the Canada Line. By all accounts, this expansion of that service has been a hit in the Lower Mainland and is exceeding ridership estimates. Again, this is an example of a special event providing the impetus for an important infrastructure project to get done.

I will mention Ottawa in a minute, but first, here's a shot below of a two-car consist (Nippon Sharyo diesel multiple unit) crossing below Spadina Avenue near the GO Transit North Bathurst Yard, where a parked GO Train awaits its evening run. 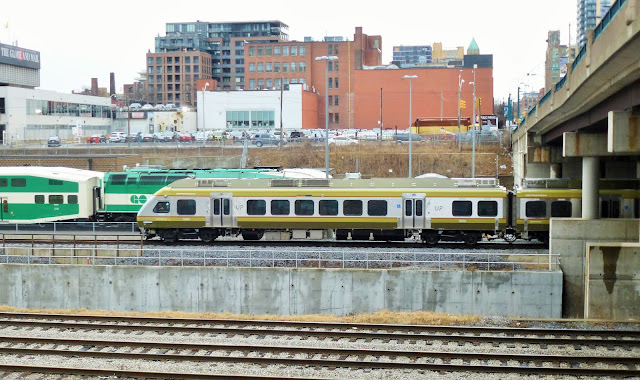 The UP Express heads west beneath Spadina Street and past parked GO Trains in North Bathurst Yard on March 14, 2016

Now, I am not going to pretend that this service is the pinnacle of what commuter rail should be. Those who have followed the story of this train know that there have been complaints about the high fares charged by Metrolinx (these fares were recently reduced), the falling ridership and the fact that an electric train was not used when the service launched last year. To me, the electric train argument is the product of those who don't realize how complex this project was and those who don't understand just how green these trains are (EPA Tier Four compliant).

This shot below shows another Pearson-bound trainset passing by the condo I rented for my family during our brief stay in Toronto. I will have many more photos to share from this high vantage point in later posts. 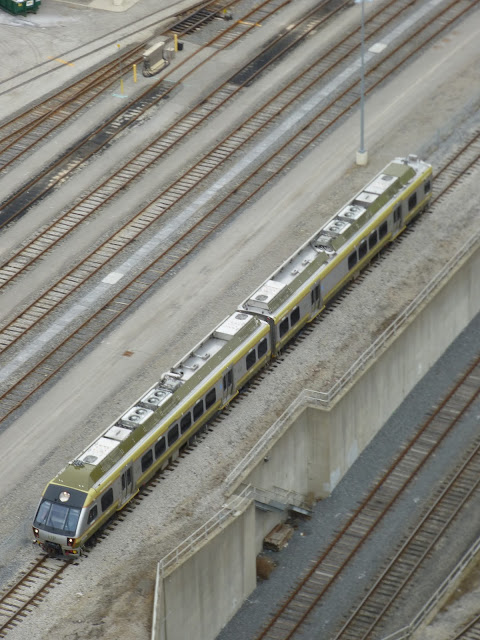 The UP Express heads west between Spadina and Bathurst streets in Toronto on March 13, 2016

This brings me to Ottawa and the opportunity this city will miss to have a downtown-airport rail link in time for 2017, when Canada's 150th birthday will make Ottawa a destination for a number of special events (like an expected Grey Cup and the Olympic curling trials) and many more tourists than usual. An extension of the existing O-Train Trillium Line to the airport will not happen anytime soon. The visionaries at City Hall here are still talking about this airport extension as a nice addition to the city's second phase of light rail expansion, if the money can be found. The proposed $100-million airport extension, which would make use of the existing remnants of the old CP Prescott Sub, would require a spur be built to the airport, since the existing rail is not close enough to the terminal. The city has said that passengers would have to change trains at the end of the current Trillium Line and board a separate train to the airport, if a link is built. That is a big problem, but it should not be a deal breaker. I am amazed that the city does not see this airport link as a bigger priority. 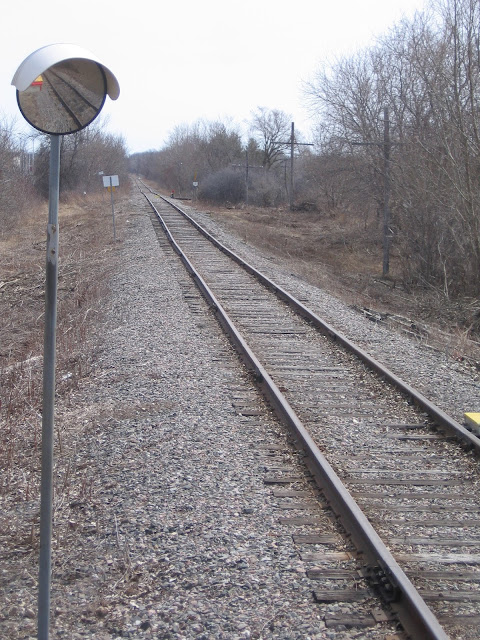 The current end of the line for the O-Train at Greenboro Station. This view shows the existing track that leads south through airport lands. It is currently CN trackage that is sporadically used to service the National Research Council's surface transportation research facility on Lester Road.

The biggest problem I have about this dithering is that an airport extension would not only largely make use of an existing right-of-way, it would also serve as a crucial link to Barrhaven and Riverside South, two massive south-end neighbourhoods that need better commuting options more than most other areas of the city. So, if the city can't find the will to build an airport extension, should it not place a heavy emphasis on connecting Barrhaven and Riverside South to the LRT network as soon as possible? If they did, the airport extension would be more of a natural add-on to the network.

So what, you may think. Ottawa doesn't have a rail link to its airport. Big deal, right? Well, it is a big deal because getting to Ottawa's airport is already a hassle. The airport is served by a single city bus route, the 97, which is a milk run route, to say the least. The 97 bus originates it the city's west end, Bells Corners to be more specific. Anyone wanting to get to the airport via bus will have to budget at least an hour in transit to get to the airport.

Also, the "parkway" serving the airport is insufficient, to say the least. The road is a two-lane road, which very often bogs down when traffic is heavy. Making matters worse, until recently, the city had an Airport Parkway and an Aviation Parkway, which served the Canadian Aviation and Space Museum. So, unless you know the city, you could very easily get confused. Thankfully, the Aviation Parkway has been renamed. But, I still find the Airport Parkway is a road not easily accessed as it stands now, tacked on to the end of Bronson Avenue. The alternate route to the airport, via Uplands Drive, is also a route you need to know in order to get to the airport on time.

My point is a rail link would simplify transportation to the airport immensely. Right now, your best bet getting to the airport is taxi or car, if you know the route and if you don't get lost or bogged down in traffic.

So, let's end on a positive railfanning note. 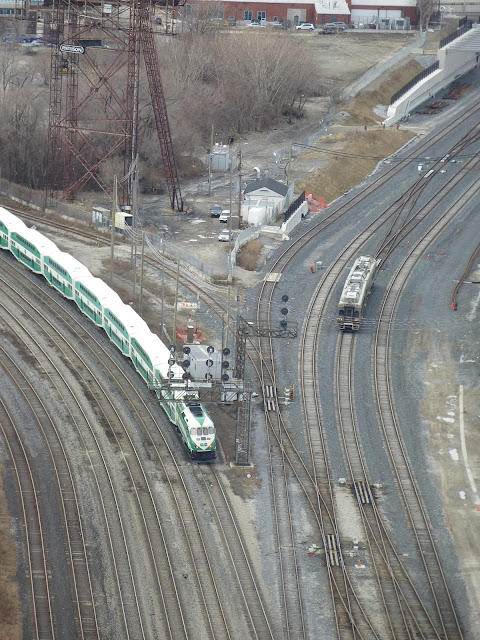 I caught a bunch of great meets at this junction, just west of Bathurst Street and north of Fort York. Here we see a GO Train bound for Union Station while a two-car UP Express heads for the airport. I saw two- and three-car UP Express consists while in Toronto and was impressed with this little train. There may still be challenges ahead for this train, but it does add a great element to railfanning in Toronto.
Posted by Michael at Thursday, March 31, 2016

Great overhead views of the UP Express!

I don't understand why Ottawa doesn't have airport rapid transit access either... but then again, neither does Calgary or Edmonton or Montreal... and Montreal is really close to existing rail lines. At least Calgary and Edmonton do have express bus service to the airport and there is a free minibus shuttle between Montreal's airport and the VIA station.

For a few interior shots of the UP Express you can visit my blog post on the UP here.

Thanks for the comments, Steve.

I guess it would bother me less if Ottawa had a reliable rapid bus route to the airport on a road that was equipped to handle the traffic. As it stands now, the city has a two-lane road through the bush before you get to the airport. It's beyond bush league. I've often said that Ottawa should stick with its rapid bus system. We cast our lot with buses decades ago. Light rail to the airport would be the best option, if it was done right. If the city ever decides to go with its current flawed plan, I would suggest they go with buses instead. Better the devil you know...

"The city has said that passengers would have to change trains at the end of the current Trillium Line and board a separate train to the airport,"
That's what Watson says, but at the end of the day, we could do anything we want here if we start to think outside the box. The questions citizens and the media should have is not just when can this be done, but WHY does a transfer have to be the only option? Watson and company love to show off how much of a progressive thinkers they are, yet most other cities seem to enjoy an airport link of some substance. It has been said before but I truly believe this, Ottawa has lost creativity, innovation and quite possibly fun. Frankly, the only issue with a spur would be ensuring it doesn't have a level crossing to deal with (and the inevitable hapless attempt to build a bridge for the parkway). As it is they haven't figured out that twinning the parkway from the airport to Riverside is not only a good idea, but one that would greatly reduce traffic and make it easier to get around.

I agree with you AJ. Every time I hear about this issue of passengers needing to change trains at Westboro (or South Keys eventually), I wonder where the creativity has gone in this city. If there was a will, they could make this work. Passing sidings allowed the city to increase the number of trains working the current Trillium Line. How is this not a solution on the airport extension?

Why doesn't Ottawa take a similar approach too the Canada Line, with two terminus? The Canada line ends at both Richmond at the airport with some trains going to Richmond and others to the airport, Ottawa could have all trains leaving bayview with some going to the airport and others going to barhaven. The city complains that the line would either need a transfer or have to deviate so much that it would add too much time to the trip to barhaven that it is not feasible but would two terminus not solve that issue?

I like the idea of having trains leave Bayview with different final destinations. The city has already proven it can run multiple trains heading in different directions on a single track. The addition of passing sidings has ensured this can happen safely. I don't pretend to be an expert on the complexities of running trains to the airport on the old Prescott Sub, but it seems to me that everything I hear from the city so far is best described at excuses. If the city is really serious about an airport link, it can be done. Thanks for your comment.