This is the third part of a series detailing the artifacts found at the Railway Museum of Eastern Ontario in Smiths Falls. You can read the first part here and the second part here.

One of the more curious artifacts in the museum is Canadian National heavyweight sleeper car 15095, built in 1913. What makes this car curious is that is was converted in 1951 into a dental car. The bedrooms in the car were remade into living quarters for a travelling dentist, a dental office and a nurse's room. 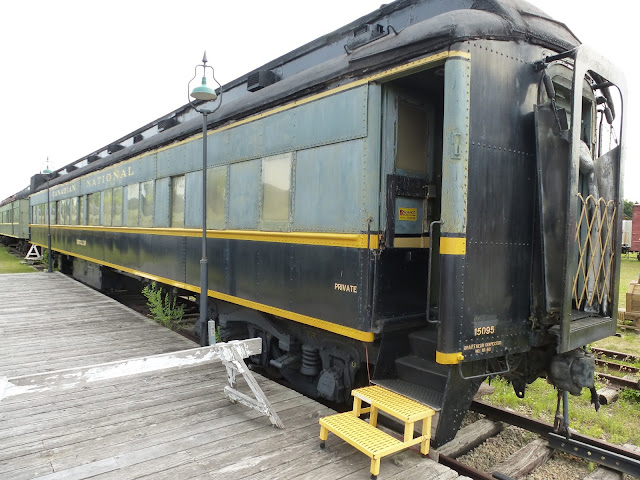 The car, which was converted in 1951, owed its new lease on life to the Ontario government, which introduced a program in the 1930s to provide free dental care to children in remote communities in Northern Ontario, many of which were connected to the outside world by the Canadian National, Canadian Pacific, Ontario Northland main lines or other northern subdvisions (think of towns like Sioux Lookout, Capreol, Kapuskasing or Cochrane).

Children would enter one end, be treated in the dental office halfway down the length of the car before exiting the other end. The dental car travelled with an accompanying car that stored the dental supplies. This car had three options for its power supply. It could receive power from a train consist, a generator or directly from the hydro grid. The dental car would also serve adults, for a fee.

The car served as a travelling dental car before being retired in 1977. Shortly after, it was preserved in Toronto and was on display there before it was acquired in 1990 by the Railway Museum of Eastern Ontario. This is what the car looked like when it was stored in Toronto (below). 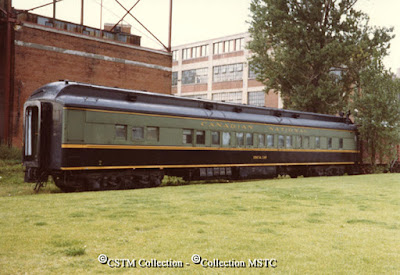 The museum's volunteer in the dental car told me that each end of the car retained much of its original mahogany interior décor. I took this photo of what the hallway near the entrance looked like. This is what a passenger would have seen as they boarded this car in 1913. That head you see in the bottom of the photo is my daughter practicing her photobomb skills. 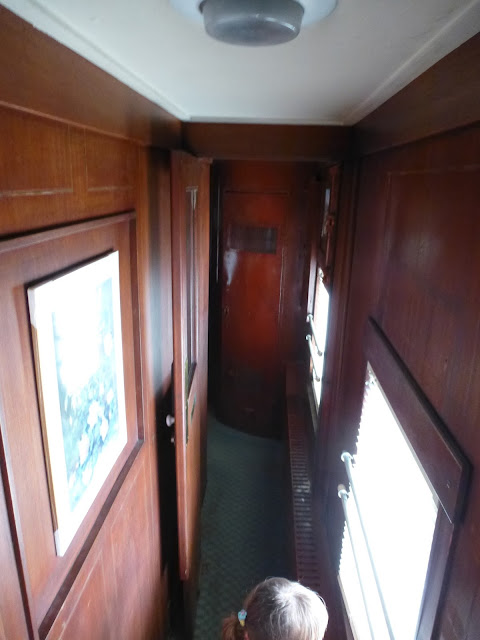 This room, below, was once the men's smoking lounge. It was converted to a kitchen as part of the dentist's living quarters. 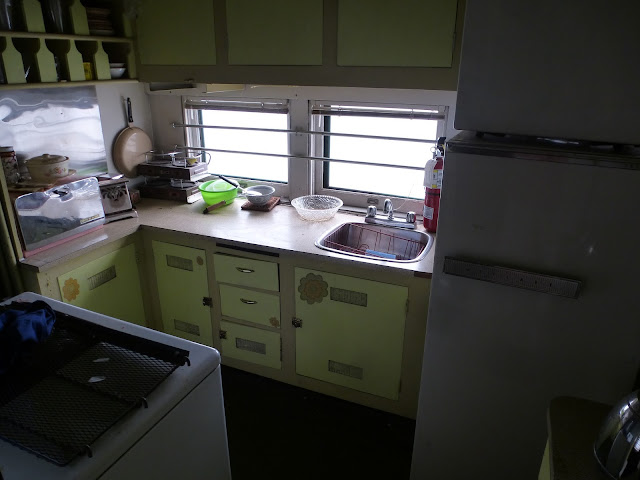 Some beds were removed from a bedroom to make up the dentist office. My daughter thought the stuffed animals on the dentist's chair were a nice touch. 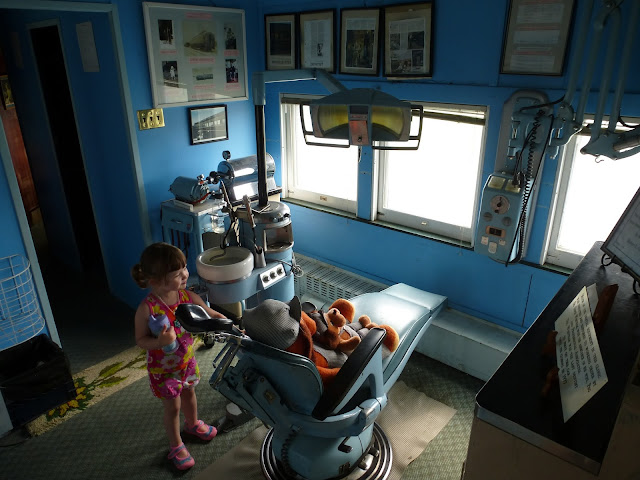 This shot below shows you what the exterior of the car looks like right now. The car is perched at the end of a long wooden boardwalk. I've read some conflicting points of view online regarding this Canadian National paint scheme. Some seem to like it while others hate it. I, for one, like it. 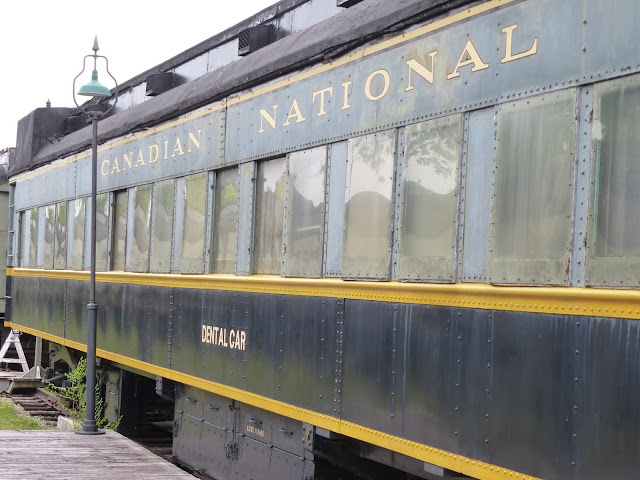 This final shot gives you an idea of the collection at the museum. When I took a handcart ride on the track between these cars, I was able to see the seven or so passengers cars in various states of repair. Given the museum relies on volunteers, I'm guessing it will be a long road ahead for some of these old beasts. 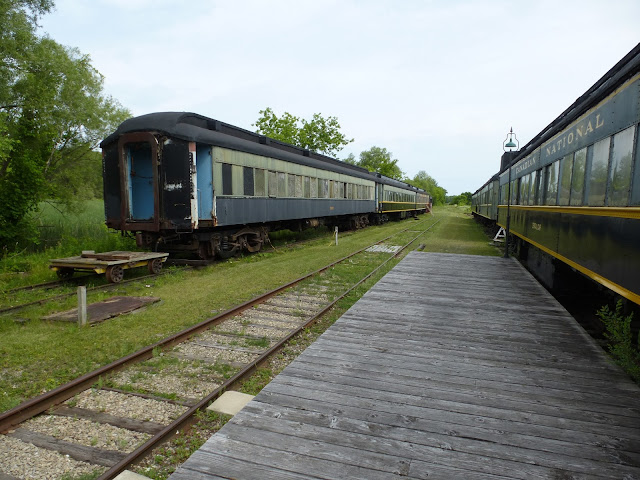 The volunteer in the dental car told me that the car, which was known as Camrose, was also used on Canadian Pacific trackage in Northern Ontario, making it likely that it might have made its way to Chapleau, where my Grandfather worked as a rolling stock mechanic.
The dental car is one of seven at the museum (see above). CP and CN both contributed three old passenger coaches to the museum as part of its creation in 1985. Some bear no outward identifying marks, which makes it tough to trace their history. ﻿
Posted by Michael at Thursday, October 22, 2015

I remember visiting the museum in 1993 I think, and there was a track car of some sort (believe it's still there) that too you on a ride across the street and down the track all the way to the lift bridge. I can't tell if the track is still there now and just overgrown or if it was removed.

That's a famous rail bridge. I don't think there's any connection there anymore. The rails on the museum grounds are self contained and don't cross any nearby roads (from what I could see anyway). Thanks for your comment, Keith.

Interesting write up again on the museum. I still can't believe I haven't gotten around to making the quick trip over to Smith's Falls to see it.

I also want to bring this to everyone's attention as I just found out about it today:
http://www.ottawacommunitynews.com/news-story/5948987-moose-consortium-project-becomes-official-with-agreement-signing/

Thanks for the link< AJ. That's an ambitious plan this group has. I'm intrigued, but not overly optimistic of its chances.

No problem! I caught this on an old style Ottawa transportation forum I occasionally check up on. I think they certainly will have their work cut out for them but I do applaud the effort and wish them success as I think there is a market here for something like this and it should greatly increase railfanning opportunities. We have to take what we can get!

ran into the blog and i found it really interesting. thumbs up!

This blog website is pretty cool! How was it !

Thanks to everyone who happened across this old post. Make sure to drop by and visit often!

This is a great inspiring article.I am pretty much pleased with your good work.You put really very helpful information...
Dentist in Waterloo, ON

Excellent information, thank you for taking the time to share with us. Amazing insight you have on this, it's nice to find a website that details so much information about different artists.

Dentist in Brampton, ON

Interesting clinic and looking awesome. I can't wait to visit this kind of clinic.

The only Dental Car left in Canada. It would travel to small villages in Northern Ontario, providing dental services to people who didn't have a full-time dentist in their town.

This is such a great resource that you are providing and give it away for free. I love seeing blog that understand the value of providing a quality resource for free.
Wisdom tooth Calgary

At Hamilton Family Dentistry it is our mission to create a safe, warm and trusting environment. Our professional staff will offer you a warm welcome and see to all of your needs. The feeling of comfort extends from our waiting area to each treatment room. If at any time during your treatment you have concerns, we encourage you to share them with us. We will do our best to answer your questions and explain procedures in plain language, putting you at ease.
Hamilton Family Dentistry
Affordable dentist in Hamilton

Dental Car is a key solution to providing access to healthcare on a continuous basis. Offering dental care solutions to serve both rural and urban communities for effective and efficient health care in the under-serviced regions. Great idea

I've been coming here for years. They are so kind and gentle. They have worked with me when I've had to do big things like replace multiple crowns at once and I can't recommend them enough!

i am browsing this website dailly , and get nice facts from here all the time .

I was one of the children that visted this Dental Car in Hillsport, Ontario it was the early 1970's. One by one the children of the two room school would take their turn going to the dentist. Dr. Ketchum and his wife who was also his assistant were very nice people. Any anxiety I had about going to the dentist soon vanished because of their kindness! It is great to see it's history being preserved. Tom Igarik

The man you are referring to as a volunteer is actually the owner of the car since he found it, purchased it, and transported it from Toronto using his own money, and then restored it himself. John was a freight yard conductor in his younger days and then professionally became a high school math teacher and has also been a lifelong cattle farmer in Lanark County, and for two or three seasons he was director of the museum and still plays a physically active role whenever cars need to be shuttled around. I know all this because he was my best friend's cousin.