Getting creative shots at Fallowfield station

Whenever friends or family visit me and take the train, that usually means I get to go and pick them up at Via's Fallowfield Station, in the city's southwestern Barrhaven neighbourhood. The station, which opened in October 2002, has become an important transportation hub for west Ottawa residents, considering Via's main station is anything but centrally located.

For train enthusiasts like me, this suburban station's a convenient and safe place to capture some images of Via corridor trains on occasion. On Aug. 1, while I waiting for a visiting friend to arrive, I was struck by the station's ridiculously challenging sightlines for rail photography. Most of my images from the last few years end up like this one, taken in 2012.

There's nothing wrong with capturing these shots, but after a while, you can only stockpile so many of these before you begin to look for other vantage points. In the case of this image below, I wanted to get a better shot of the entire train's consist, since this string of cars included a baggage car, which is not a terribly common site on this type of corridor train between Montreal-Ottawa-Toronto. 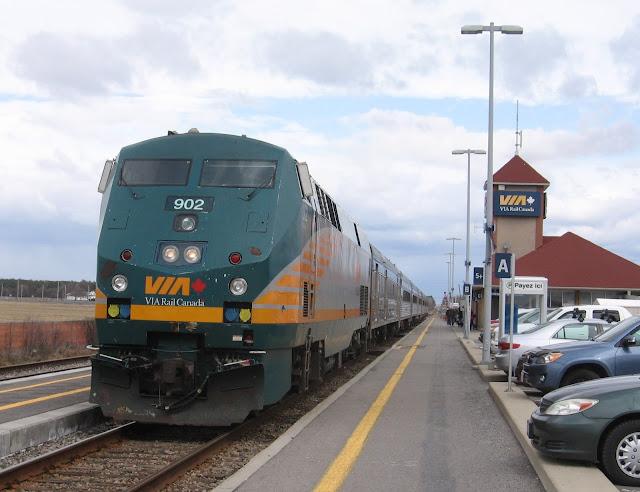 The map below and the photo above illustrate train fan's challenge. The parking lots at this station are up tight against the platform, which rules out backing up from the track to get a better wide shot (unless you want a bunch of cars in your shot). The platform itself is relative narrow, which also prevents you from being able to back up a bit and shot for a wider shot. You will notice in the photo that I have marked a yellow arrow. This arrow marks the spot that solved my problem as to how to get some wide shots at this railway station. 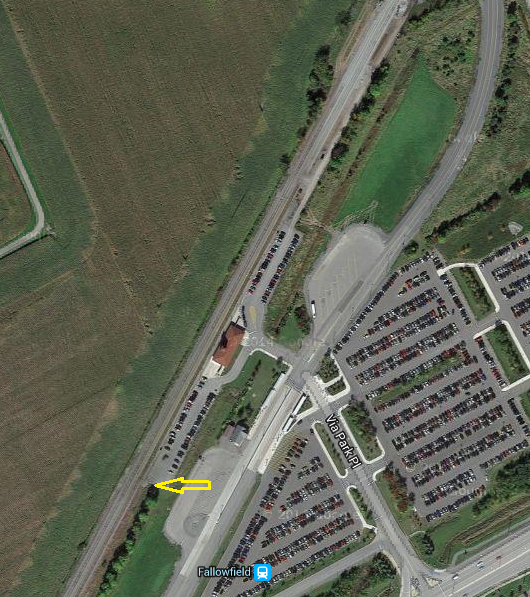 Just beyond the end of the parking lot, there is a small patch of ballast extending from the railway right-of-way. This patch of ballast is essentially level with the tracks and it also has the added benefit of offering you an unobstructed view of eastbound trains crossing Fallowfield Road. I backed away from the tracks as far as I could manage without getting too much foliage in my shot. As you can see from the shot below, I didn't eliminate all the foliage, although a little cropping took care of most of it. In the spring, fall and winter when the leaves are off these trees, this vantage point will offer a better view, although the shots won't be as colourful as the one below. 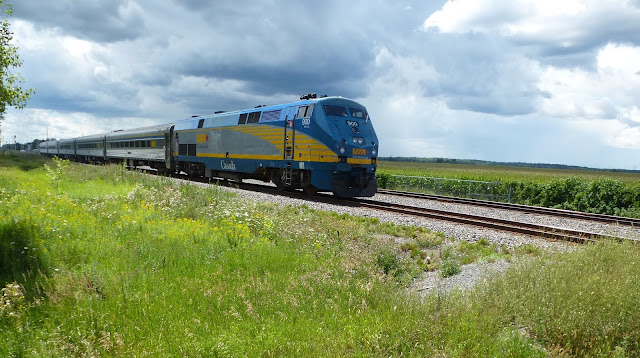 The end result was worth a little bit of advanced scouting. Usually, when I am waiting for a train at this station, I will set up at the end of the platform facing in the direction of the incoming train. This also ensures I don't take photographs of people without their consent.

This little patch of ballast, which is easily accessible from the edge of the parking lot, makes things a lot easier. I was quite happy with this shot, although the clouds above tended to blur some of the streamliner coaches in tow, but that's a minor complaint. I like what I was able to capture here. There's a wide expanse of clouds and sky, a corn field, some bright green wildflowers along the right-of-way and some signals behind the train. All in all, there's a lot going on in this shot.

Having successfully experimented with this area, I thought I'd pass along the tip to local railfans.
Posted by Michael at Thursday, September 03, 2015
Email ThisBlogThis!Share to TwitterShare to FacebookShare to Pinterest
Labels: Fallowfield, Ottawa, P42, P42DC, railfanning, railways, Smiths Falls Subdivision, streamliners, Via Rail

It's always worthwhile to look for a different vantage point.

A stepladder helps at times. :)

I haven't done that yet, but it's a good idea, Steve. Of course, I am always on the lookout for high points, hills, ridges and interesting elevations trackside. Of course, Eastern Ontario's topography is a little more compliant than the prairies.

Not up to me at all, but...that photo of the Ottawa-bound train with the cloud background would make a super blog header. Or a great photo as well, all on its own.

Ask and ye shall receive, Eric. Thanks for the comment.

Looks great, Michael! A real fall sky and a great angle for your header!
Eric