It's officially on borrowed time. The last stubby little piece of the Canadian Pacific Carleton Place Subdivision is being removed by CN. This tiny spur has been used for years for car storage but the last few covered hoppers were removed in spring 2013, leaving the little spur unused for the last two years. CN has begun to remove the trackage and will no doubt soon replace the Bells Junction switch with continuous rail. That means Bells Junction will officially be just Bells on the CN network map, if it is anything at all.

So, with another piece of Ottawa's rail network gone, I thought I'd share some photos of these rails in their final days alongside what the scene is like today. This, below, was the remnant of the Carleton Place spur on New Year's Day 2015. Even then, its days appeared numbered. 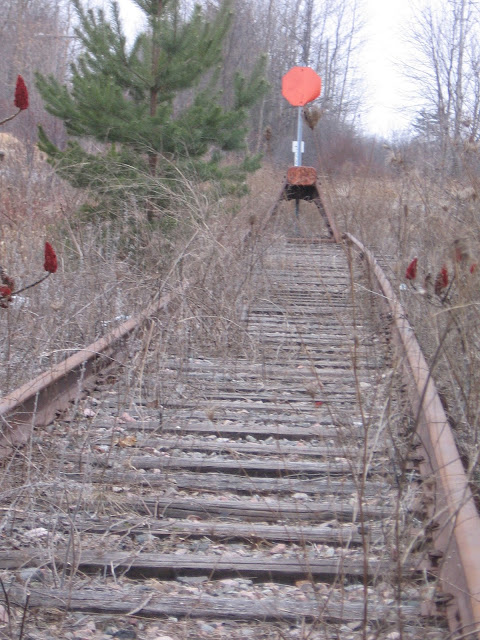 And this is the scene now. The line that once turned away from Beachburg has been cleared. Walking along the right-of-way (not on it), there were piles of rails, tie plates, spikes and other scraps littered around. 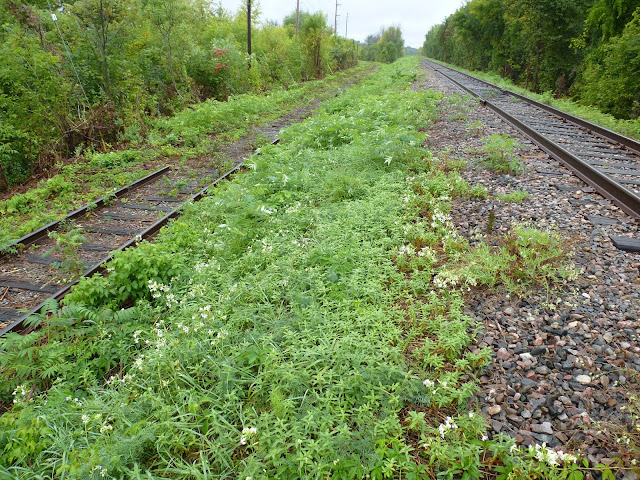 Here's one last look at Bells Junction and the long-since disconnected signaling equipment that once served a transcontinental rail line. This junction was created in 1966 as part of a scheme to tear up a large portion of the rail network from Ottawa, as part of a beautification scheme. The CP Carleton Place Subdivision used to pass beneath the Beachburg Subdivision a little further west of this junction (you can read about the history of this junction here). The CP line, which once wended its way through a number of west-end Ottawa neighbourhoods and farm fields, was ripped up all the way to Bells Corners, where CP built a turnout off of Beachburg. This shared trackage arrangement lasted until 1990 when the last of Via Rail's Canadians used the Carleton Place Subdivision. The Canadian's route was then changed and the subdivision was torn up, since CP had ceased all freight operations on the line before 1990. 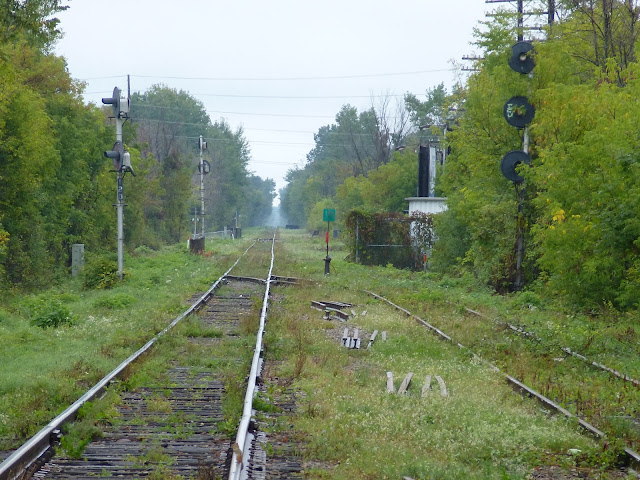 Here's a shot below of some rails on their way out of Ottawa. This has been a familiar site for me in the last year or so. It's a shame to see this spur go, but it really served no purpose once it was no longer used for car storage. I was surprised that CN stored cars at all, since half of Walkley Yard is empty at any given time (this is the former CP side of the yard), making it a much better site for storage. 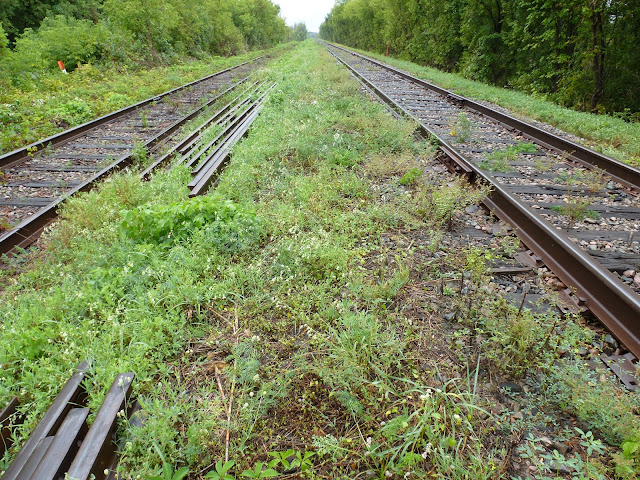 This photo below was taken during one of the first expeditions I took when I started this blog in April 2013. These are the last cars that were stored on the line in May 2013. Shortly after I took this photograph, the cars were removed. I recall that, around 2012, CN also stored a row of flat cars on this line for some reason. 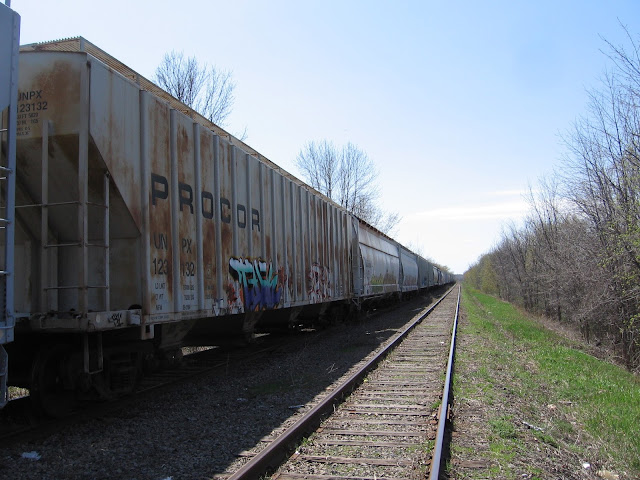 Here's an interesting shot from the past, when Bells Corners was beginning to develop close to the tracks. Here a CP passenger train branches off Beachburg on its way west over the Carleton Place Sub to Carleton Place in 1973. Given the length of the consist, I can only speculate that it might be the Canadian. 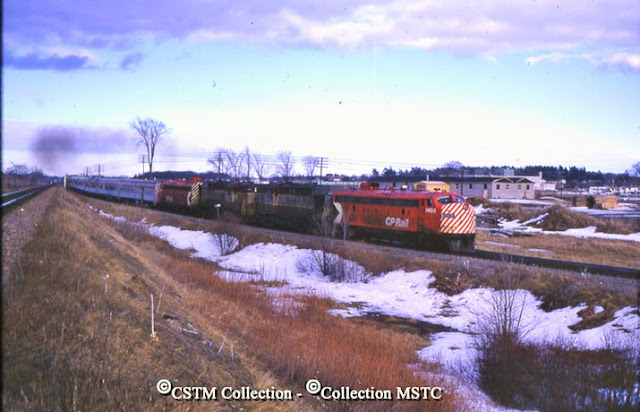 Canada Science and Technology Museum image
So, this area will soon take on a different look. With this spur gone, there will be almost no spurs left on the Beachburg Subdivision and Renfrew Spur. Some spur trackage remains around Carp but, other than that, the line is pretty much a straight shot out to Arnprior now, with no junctions or spurs. I can't help but think we are in the final days of freight trains in Ottawa's west end. I can only hope, as a rail fan, that Nylene Canada continues to thrive and make use of rail service for years to come. Because it really is the last customer left standing for Ottawa's rail fans in the west end.
Posted by Michael at Thursday, September 24, 2015

Not surprised to see it go since I've not seen anything on it in quite a while. Last time I saw cars on it was quite a few years ago and they looked like petroleum tanker cars.

I do agree that the days of freight in the west end of Ottawa will be over the second that Nylene stops using those rails.

Another lost opportunity, although it was really lost 25 years ago. Had the Carleton Place sub stayed active, it probably would have served as a well used line had commuter rail ever materialized.

I seem to remember that some of the crossing poles or towers were left in place where it crossed Moodie well into the late 90's.

Another sad moment for rail in the west end. All we can do is hope that Nylene stays active as you say Michael. I also figured I'd pay a visit before the last of the remnants are torn up and I got some pictures. Something that stood out to me was the buffer stop, track-side near the 416 bridge.

Kind of a cool piece of rail history.

Thanks for the comments, Dave, Keith and Michael. I agree with you, Keith that this removal isn't really the end. The end of that old sub was 25 years ago when nothing was done to possibly save the right of way for commuter purposes. Great image of the buffer stop, Michael. I saw a similar piece at Walkley Yard, which is visible in one of my shots in last week's post. And I'm glad that I'm not the only one who remembered those crossing signals remaining in place until the late 1990s.

Update on the tracks leading to the Prince of Wales Bridge

Thanks for the link. For those keeping score, the tracks are being removed from the bridge, which isn't a huge deal, since the line was disconnected from the Capital Railway last year. Still, sad to see. Yet another recreational trail seems to be taking shape.

The work near the POW bridge is part of the temporary station and construction access for the LRT.

On another note, I was held up on the O-Train today with a stop signal at 6, which is the southbound signal at Walkley Junction, just north of Greenboro. This has never happened to me before, but I couldn't see what passed. Then, once off the O-Train, I looked north and a locomotive and 4 covered hoppers headed back across the junction into the yard. I've never seen a switching movement leave the yard, and I'm not sure what else would be happening at noon on a Tuesday.

Thanks for the update, Alex. I guess it's better news that the track is being removed temporarily for the O-Train. Still, what are the chances that it will be put back in place? Also, since the city is seriously considering a recreation trail for the POW bridge, I fear that might be the end result.

The train you stopped for Alex was CN 589 heading out to Kott Lumber and SynAgri feed mill, both on the Smiths Falls Subdivision. Both customers are located just outside Barrhaven. That train makes two runs a week, one on Tuesday and one on Sunday.

Is that confirmed? It looks like they're just removing a small section of rail for an access road

They've removed the tracks right at the bridge before for construction and put them back. This was back in 2007 though

Go here and change the year to 2007 and check out the bridge
http://maps.ottawa.ca/geoottawa/

Whatever the case may be, I can't see those tracks going back in place for any reason. They haven't been used in a decade and the city has made it clear there is no future for those rails over to Quebec in the form of a commuter train or any other service.