A return trip to Bedell, Ontario proved to be quite sobering this past weekend. I had read that the Canadian Pacific has contracted a company to scrap the remainder of their North Prescott Spur in Kemptville. I decided to visit to see if this was the case. It turns out that this stretch of the old Bytown & Prescott Railway (CP's old Prescott Sub) is indeed being scrapped. Considering this line was the first to reach in Ottawa in 1854, I thought it was worth my time to take some shots and dig into the history a little more. I felt fortunate to get a few final photos, but there's always the underlying sadness to see history being taken away.

My first trip was to an old feed mill and grain elevator on Van Buren Street in Kemptville, which appeared to be one of the last rail-served businesses on this old line. I walked down the line from the Van Buren crossing, to see if there was a better vantage point to shoot the grain elevator. The overgrowth to the left, as you can see below, ensured that this elevator would remain mostly hidden.

Interesting fact: Kemptville owes some of its early prosperity to the fact that it was chosen to be a railway town, set up by the old Bytown & Prescott as a station stop. 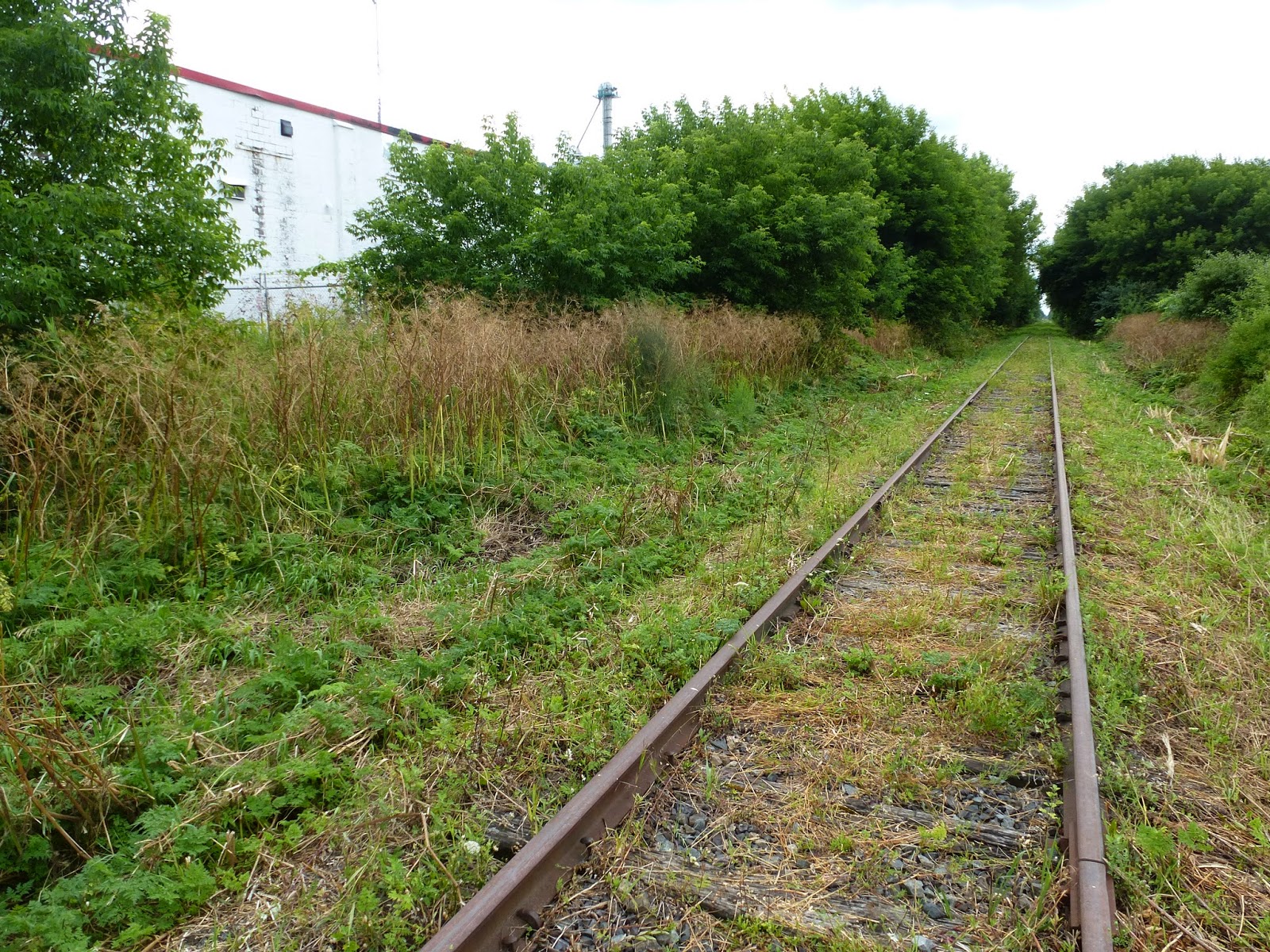 When I arrived at Bedell, along the CP Winchester Sub, I found the old signal tower that stood next to the turnout for the North Prescott Spur, had been removed (below). Given the condition of these towers, I doubt they will have much use to CP. 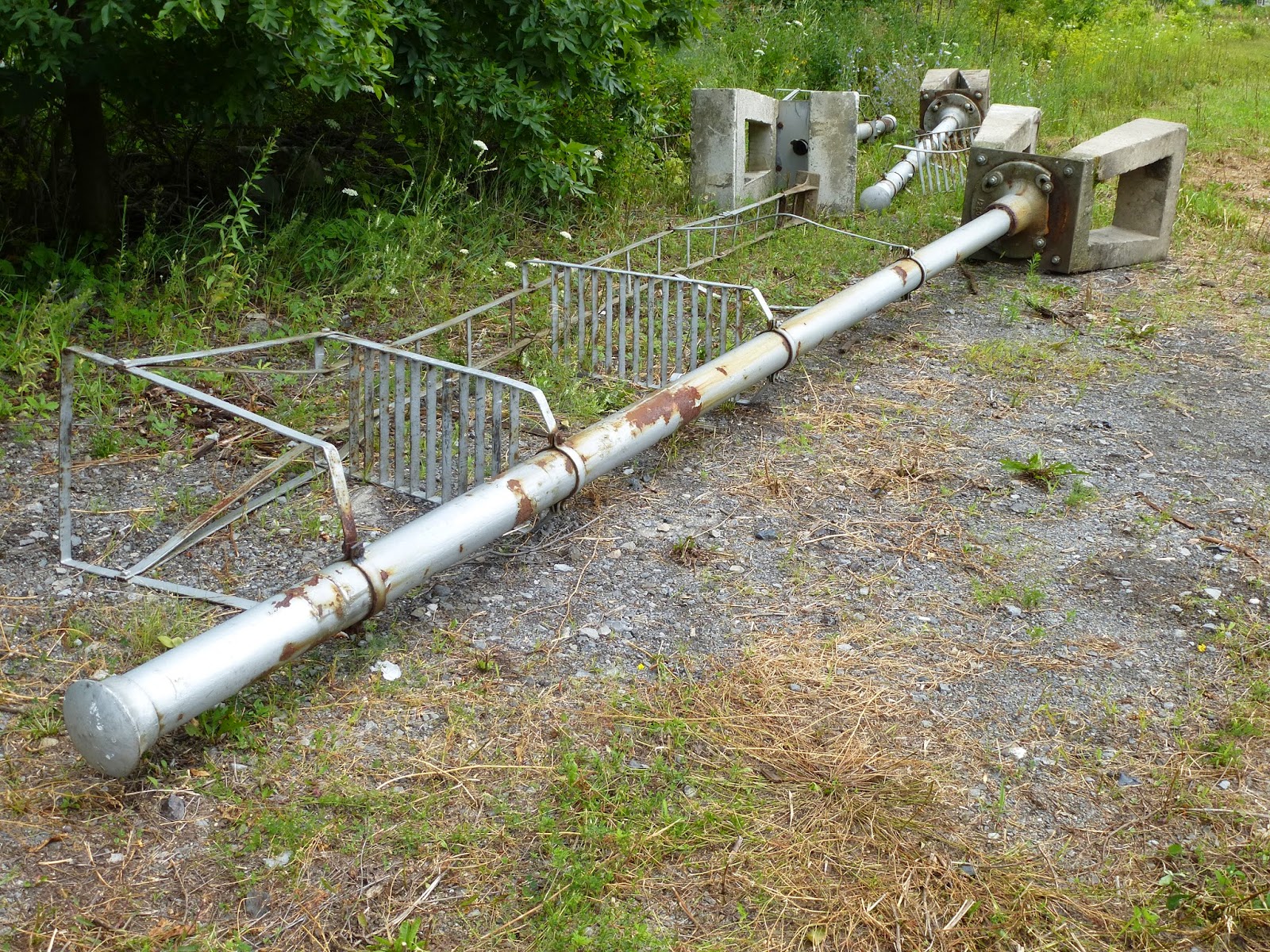 This was the scene just two weeks ago, when the remains of the old signal tower still stood sentry over the abandoned spur (below). ﻿ 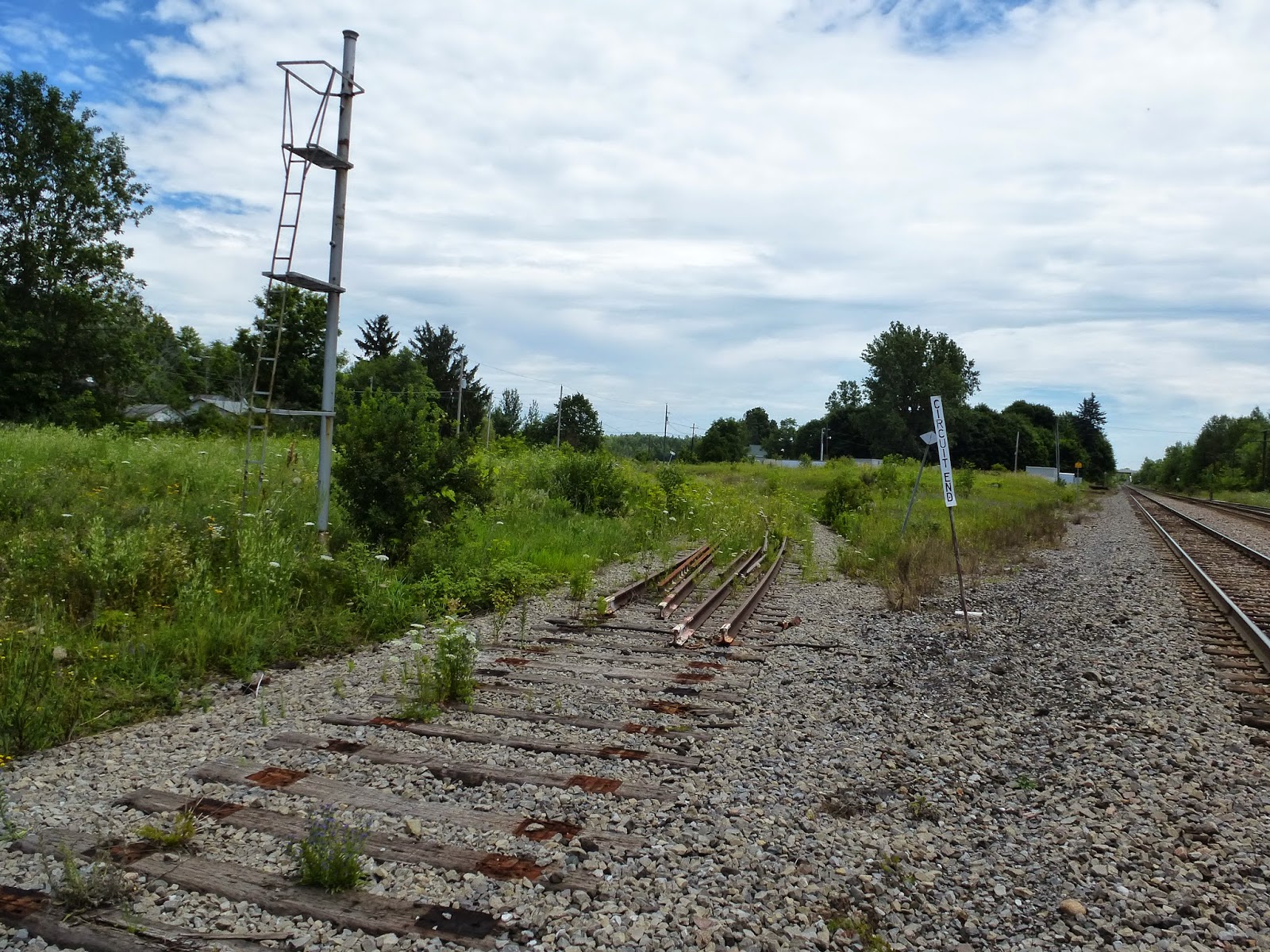 I also saw a stack of old rail trackside, waiting to be carted away to other parts of the Canadian Pacific network that are busier than this lonely old rural Ontario spur. A little way from this pile, another pile sat in the weeds, which included the rubber seals used for level crossings. 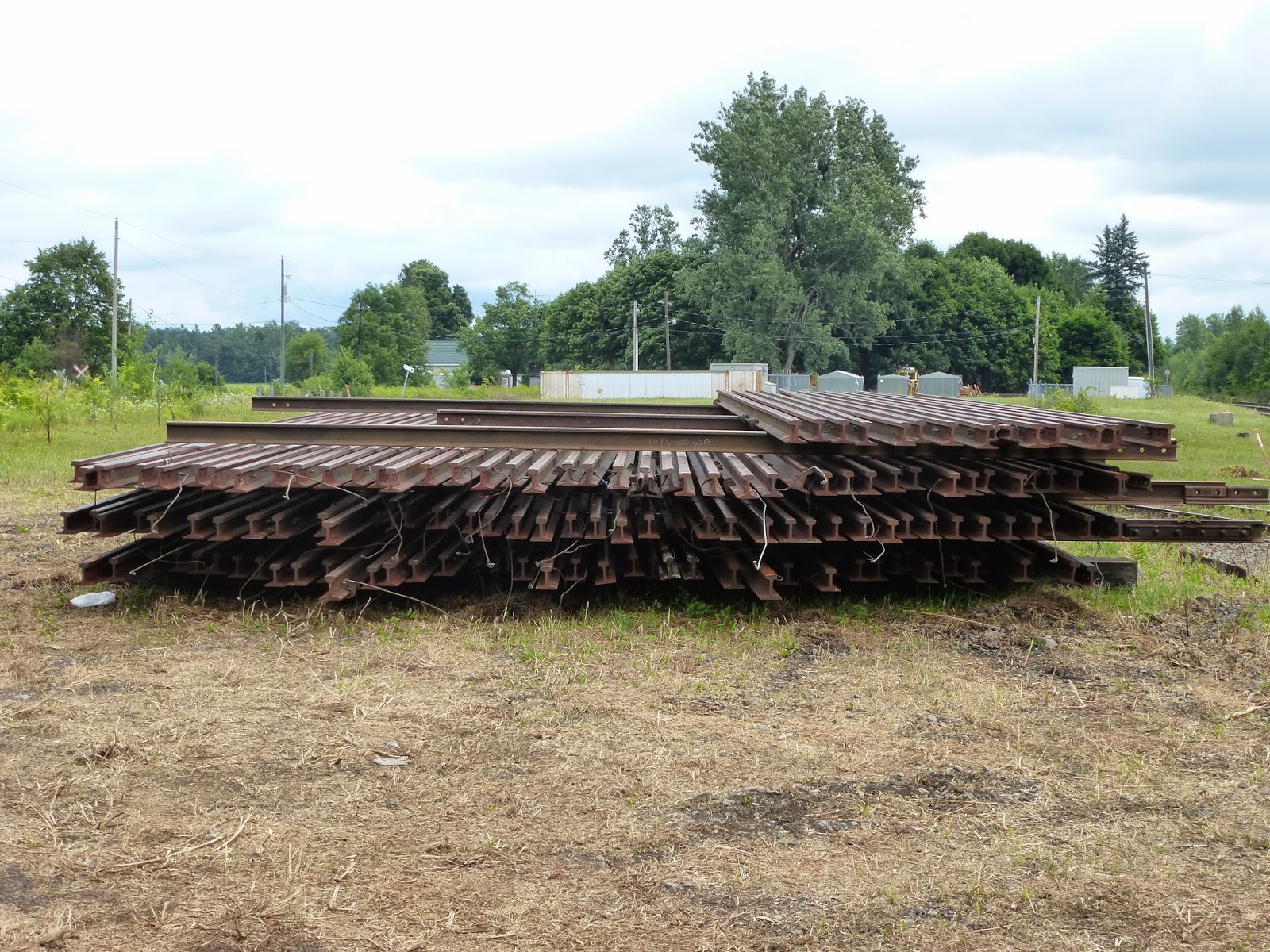 This was a little disappointing to me. The old Bedell marker had been taken down and left in the weeds. I turned it over to grab a quick shot of the sign. I was a little perplexed why the sign would be taken down. I suppose it's because this area along the main line will not be used for anything moving forward, but I thought the sign was a nice touch and reminder of busier times. 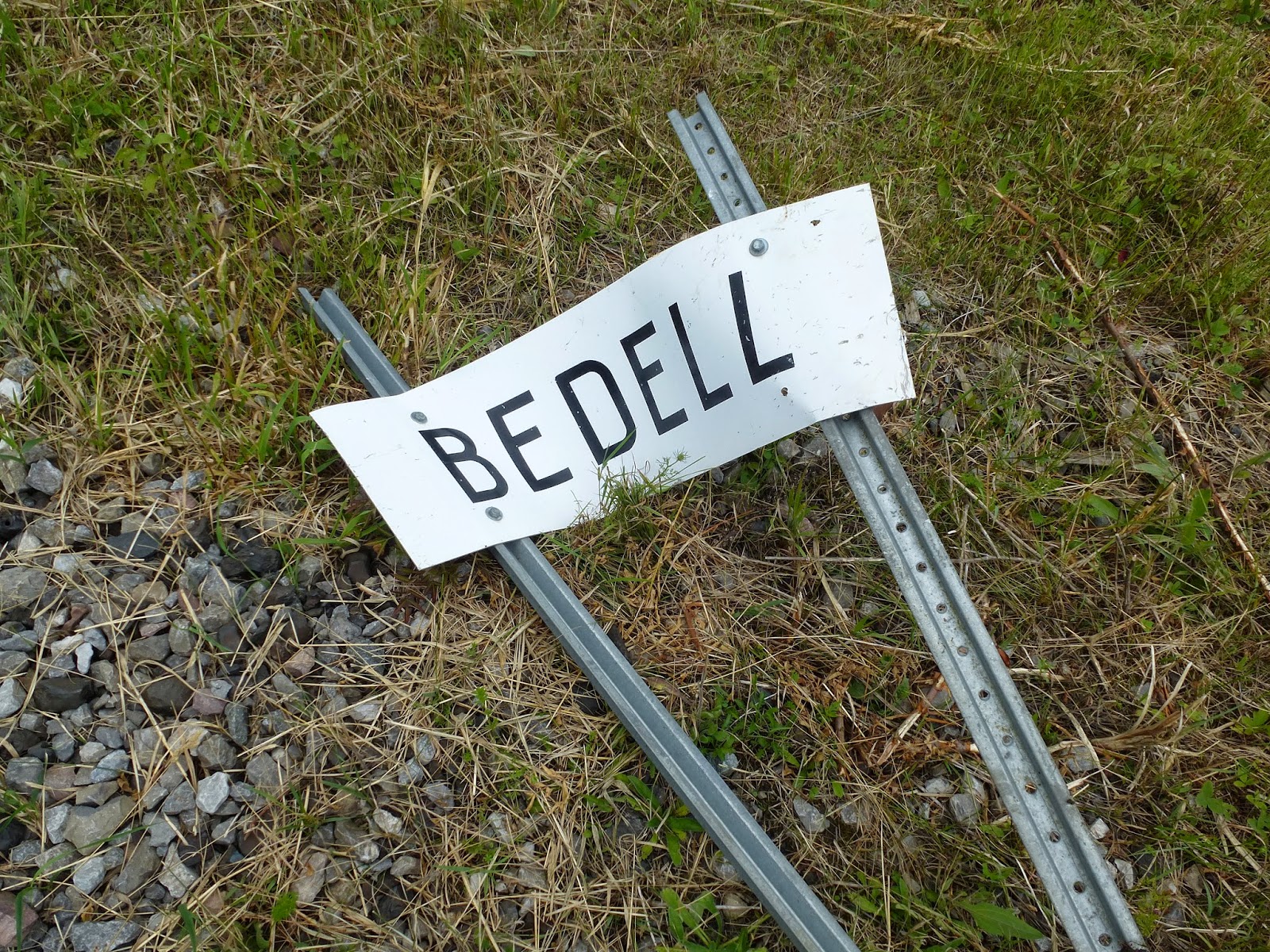 You will recall that just a few weeks ago, the sign was still standing in an area with wildflowers. 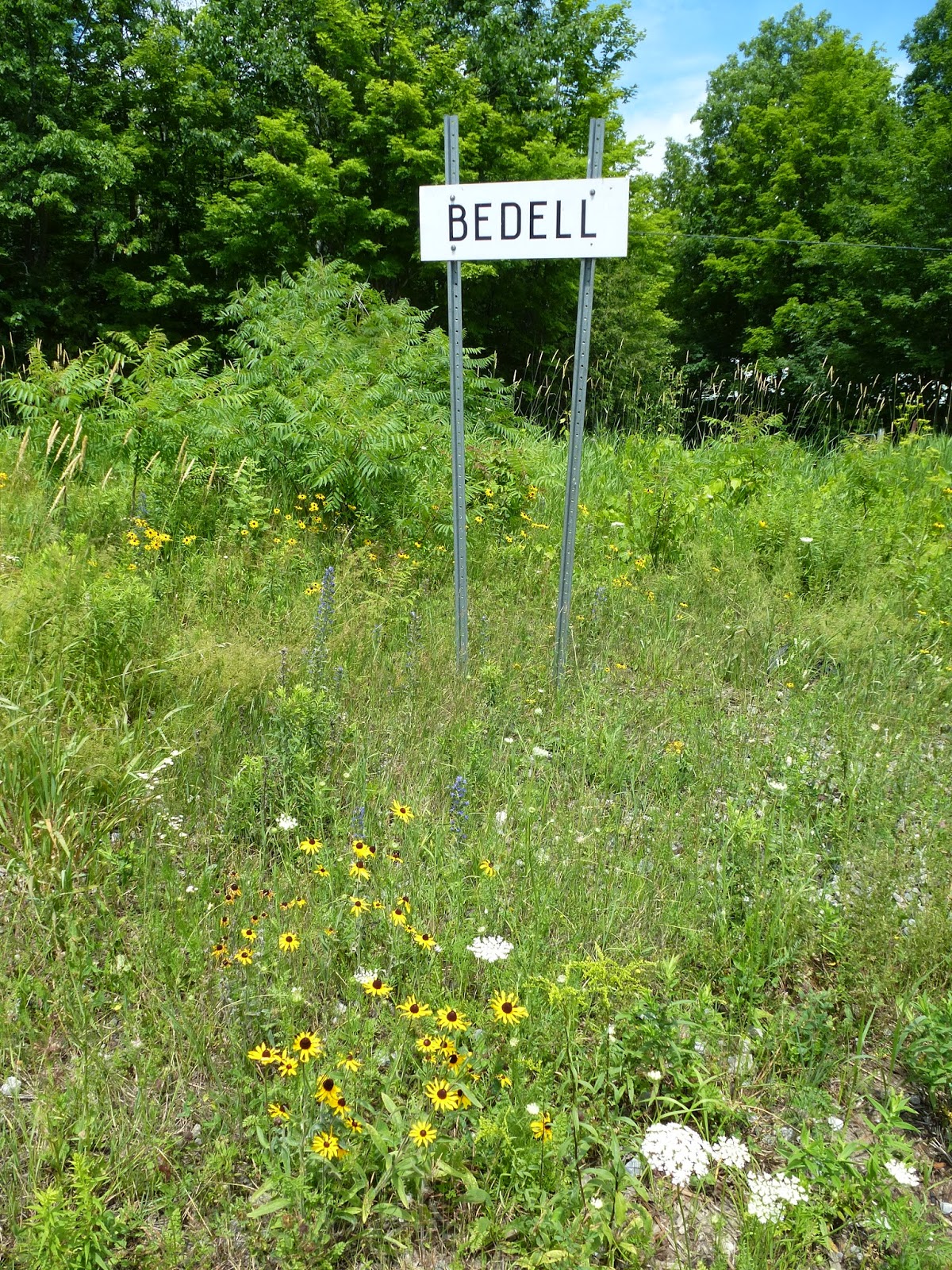 I made sure to return to the old feed mill to get a shot of the elevator, but this was as close as I could get from the parking lot of the shuttered facility. You can also see the storage huts for road salt and sand behind the fences. I have read that CP once serviced this road maintenance facility as well another on the South Prescott Spur.
﻿ 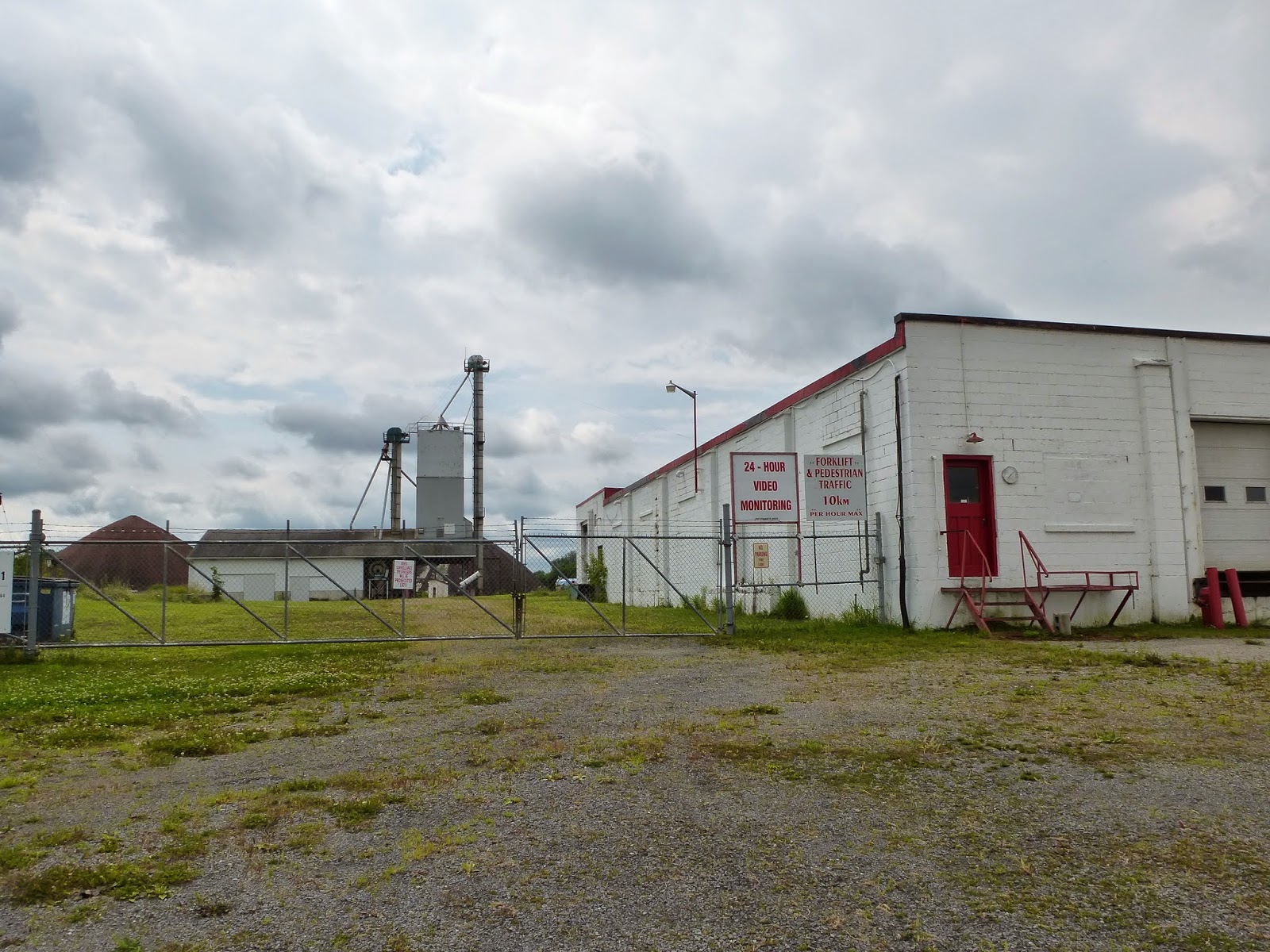 Closer to the main line, many of the rails that had been pulled from the North Prescott Spur were labelled and ready for shipment. I'm not sure whether CP is sending a local to load these onto cars. It would be nice to shoot that. 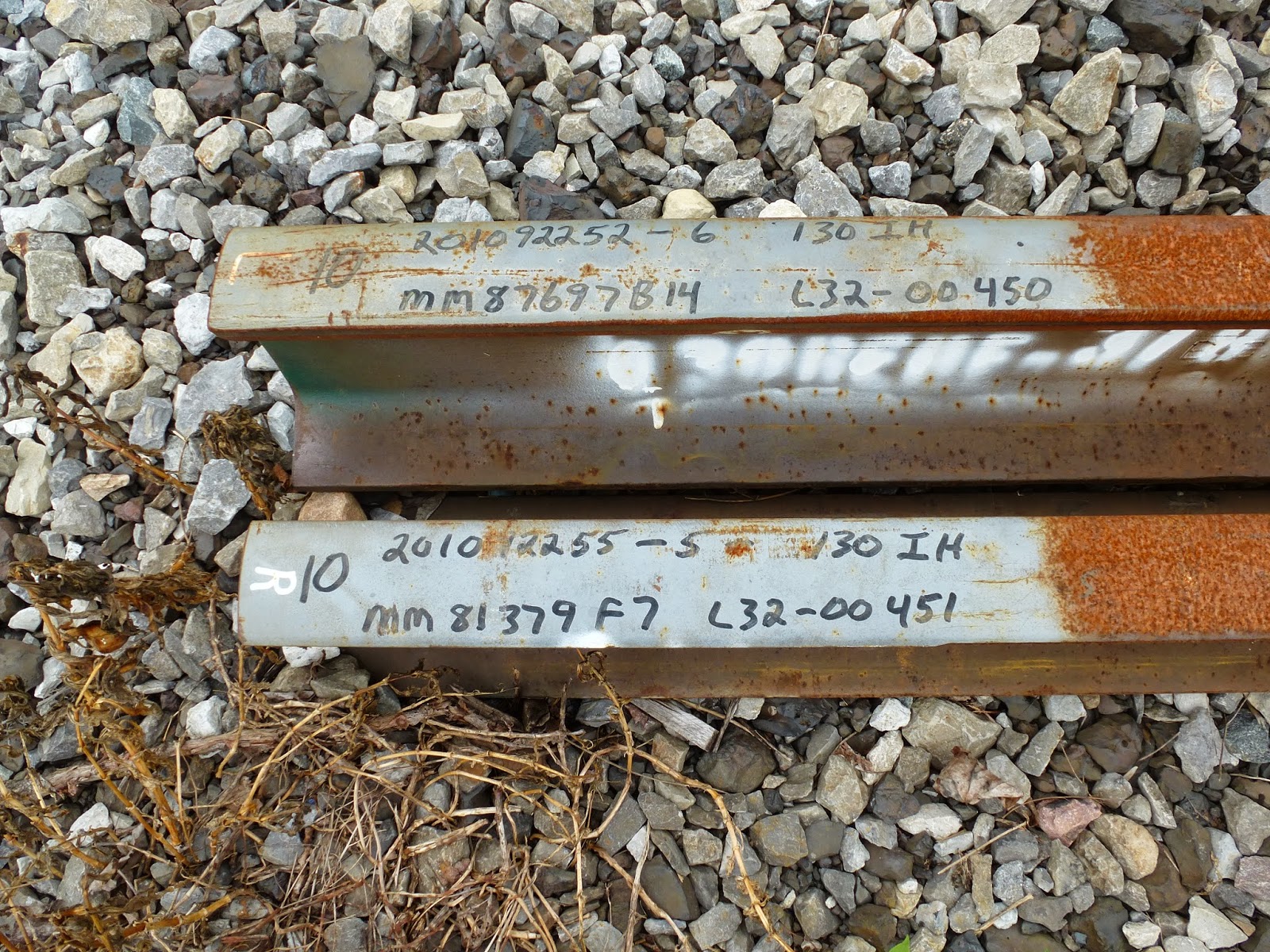 As I noted in my previous post about this spot, Bedell was once an important stopover on the CP main line, where steam locomotives were once serviced and where an interlocking tower, rail yard and station were located. The area had an interlocking crossing between the main line and the old CP Prescott Sub at one point, but this was replaced by a diamond. The spot fell into disuse in the 1960s onward, when CP began to direct its freight traffic from Smiths Falls. The old Prescott Sub was officially abandoned in 1997, with the majority of the line torn up in1999 between Leitrim Road in southern Ottawa and Kemptville. The remnants of the remaining line, the North Prescott Spur, was officially abandoned in 2012. Now, Bedell and the Prescott Sub are pretty much historic footnotes.

And, yes, I did get some time to shoot actual railroading in action along the main line. I struck out this past weekend, since there were no freights hustling by when I was there, but my previous visit two weeks earlier resulted in a great encounter with a westbound manifest freight, with a number of interesting pieces of rolling stock. I will end my initial series on Bedell Ontario with that meeting next week. Here's a small teaser below. Can you make out what type of cars are immediately behind the lead units? 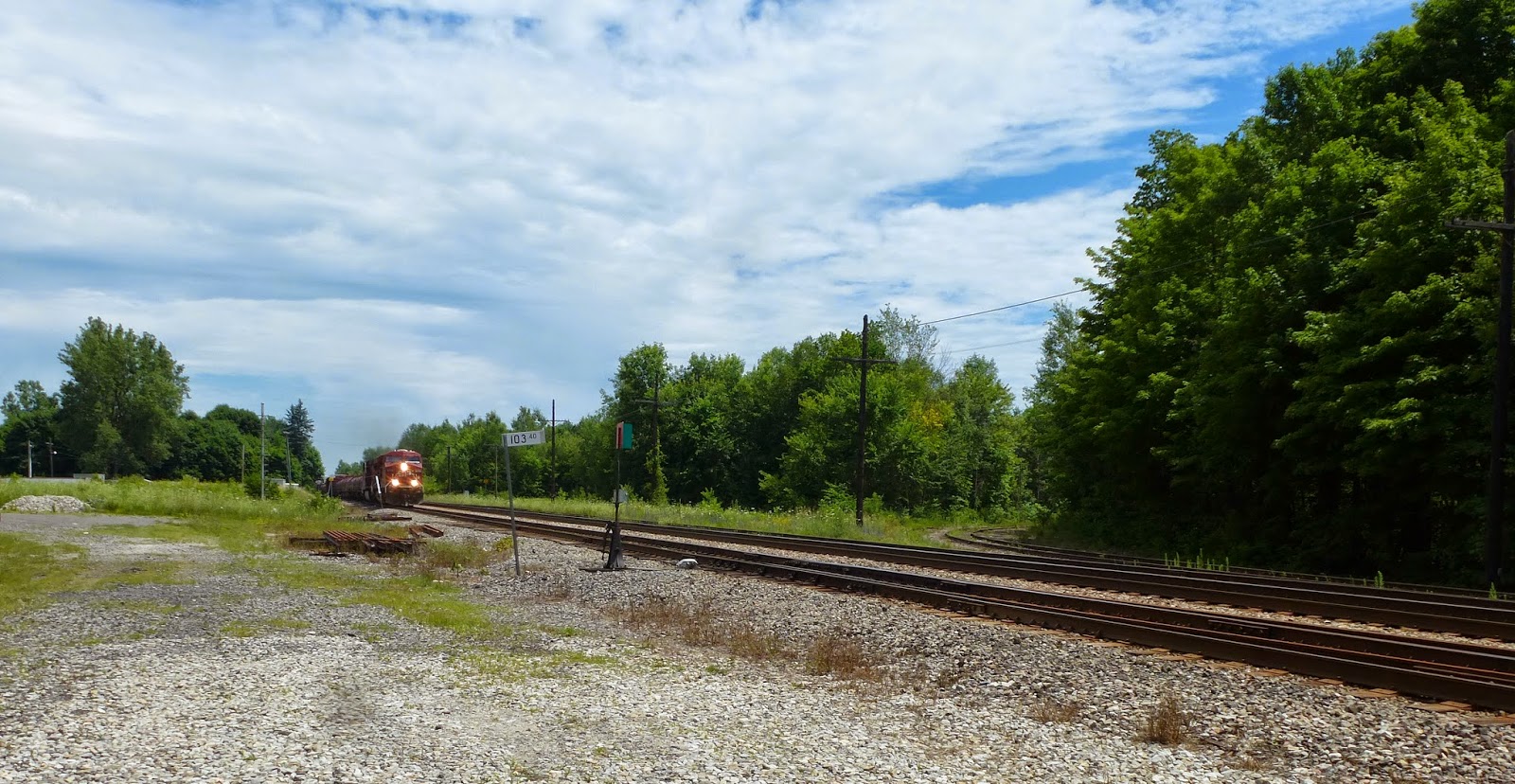 It's sad to see a rail line go, but I'm glad you're documenting it.

Looks like coil cars behind the CP engine but I could be wrong :)

Good eye, Steve! I will share more of those photos in the next photo. I was surprised to see coil cars leading off this manifest.

Interesting post! Seems I must have missed you last weekend as I was camped out just down from your final spot on the tiny plateau and managed to catch 2 westward freights within 15 mins of each other (not bad considering I sat an hour and half waiting for something when I first got there). I had been wondering what was going on with those old signal towers since I was surprised to see them on the ground when I initially pulled in. Same for the "Bedell" sign. Here I thought I was loosing it because I swore it was there last year when I had a couple hours to pop in for some train watching.

AJ- If you were at that plateau on Sunday around noon, then I did see you. Glad you caught two freights, but I am a little jealous! I waited an hour and a half and saw nothing! Timing is everything I guess. Next time you see a red Mazda minivan (Mazda 5) come by and say hi. I didn't know there were any other train watchers in the Ottawa area.

Sounds good Michael!
It wouldn't have been noon, but closer to 1 or so. I stood out - brand new Mustang. Probably why the engineers were paying attention and waving so much lol

There are a few local people who watch but there is so little locally that anyone I've talked to heads to Mountain, Finch, Smiths Falls or anywhere along the CN mainline. Usually I'll hit up Bedell or Cardinal. Occasionally I'll get down on a weekend past Trenton (Grafton Station is fantastic too) where the main lines get tight. Awesome watching there!

I've been a Kemptville resident since the summer of 1982.
It is both sad and a shame that the rail link to Ottawa is gone. We hear so much political bluster over "infrastructure" and here we have not only lost important history but also the chance to provide commuter service (if not more).
I'm sure highway 416 would last longer if many commuters could take a "GO Train", or in this case possibly the "O-Train" to and from work daily.
Maybe some company could also gained a few coins from freight ... Maybe.
I recall that sometime in the early to mid 1990s there were a few short weeks of high speed freight trains heading to and from Ottawa, or some location north of here. I always supposed that there was some work being done on the mainline and I was seeing diverted traffic. From my living room window no less!

By the way, does anyone know the location of the Kemptville station put up by the Bytowne and Prescott?

Building a freelance railway based on the Prescott sub. Was wondering if you can email me if you can share your pics
Searchmontstation@gmail.com

I'm confused. So the mainline was scraped?

Mr. plane man,
The main line from Smiths Falls to Montreal is not being scrapped. It is still double tracked here.
What HAS disappeared is the (very) old north-south line from Ottawa to Prescott on the St. Lawrence River.
I hope this somewhat clarifies things for you.
- Reg.