The Grand Trunk's legacy lives on in a few scattered communities around Canada, but nowhere is the grandeur of the railway better reflected than in Petrolia, Ontario, a beautiful Victorian oil town in southwestern Ontario, east of Sarnia. The town's central square faces the wonderfully preserved Grand Trunk Railway station, which has long served as the town's central library. I passed by this station a number of times when I was younger but never really knew much about it until I dug into its history last year. The results were surprising. 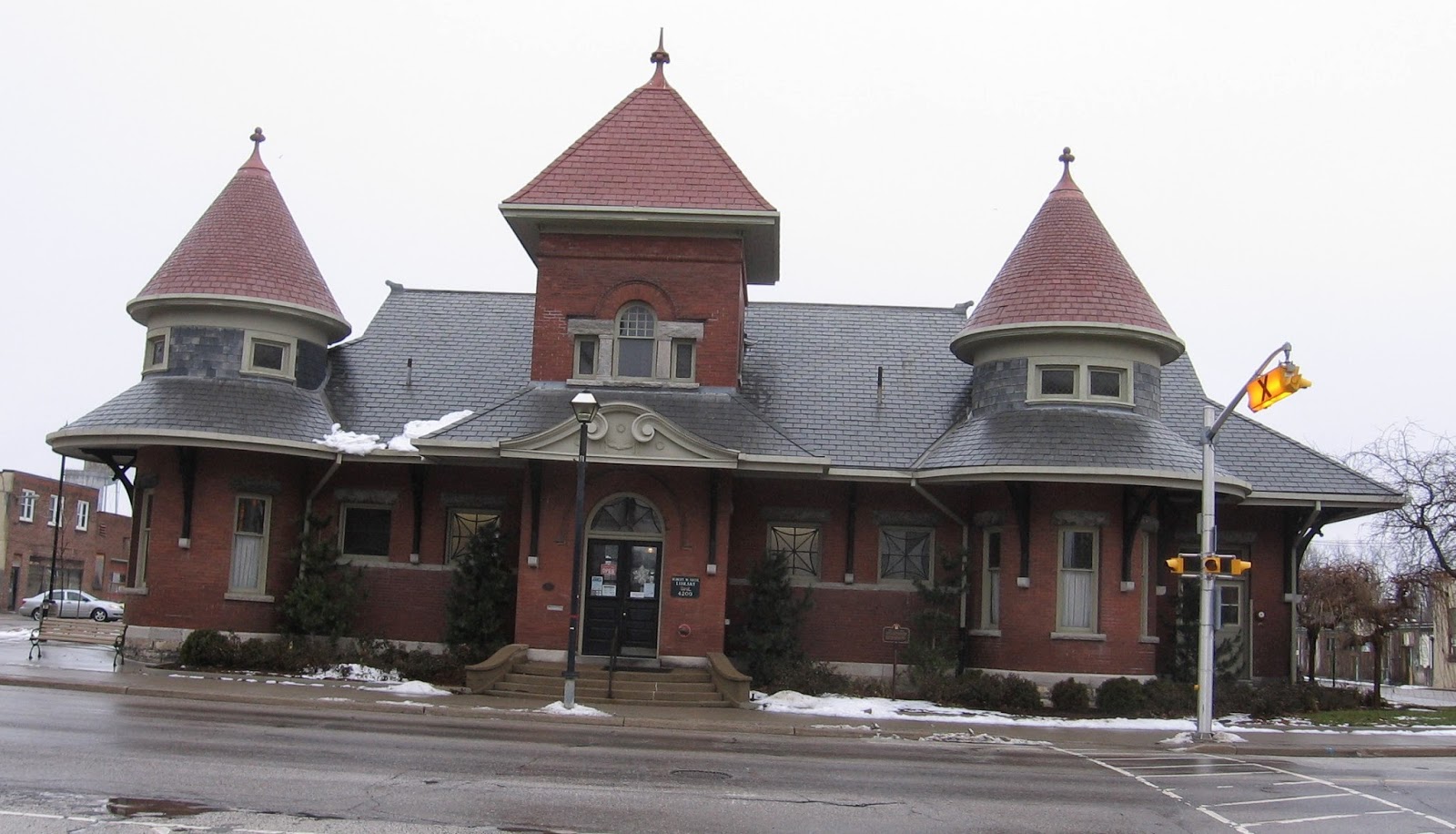 Above: Petrolia's central library, formerly a Grand Trunk terminal, is a town centrepiece. This shot was taken Dec. 22, 2013.

The most remarkable feature of this building today is that it is virtually unchanged from its railway heyday, as you can see in this undated photo below. Note the muddy streets and the alternate town spelling. The town has long since changed its official spelling from Petrolea to Petrolia. 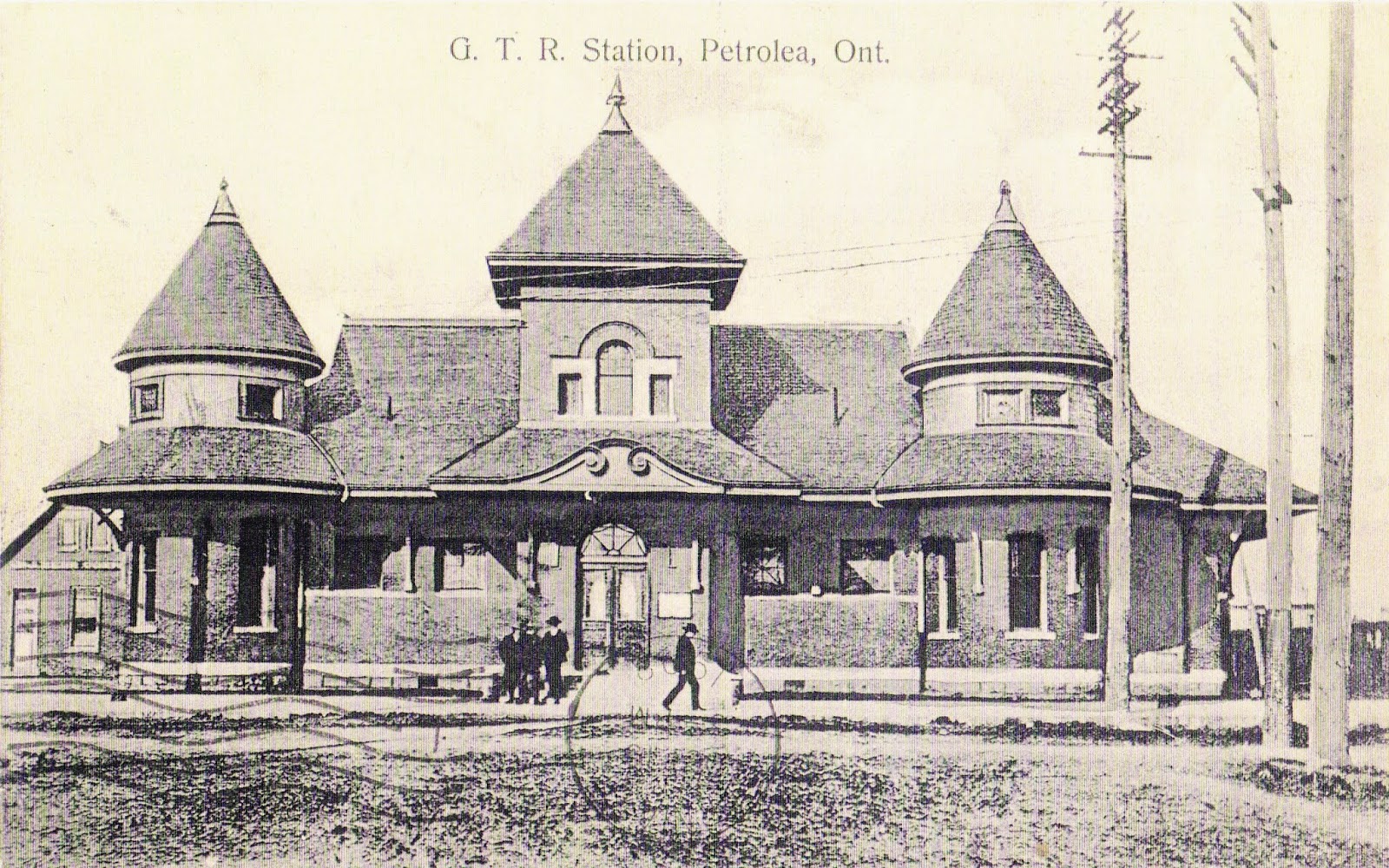 For those unfamiliar with its history, Petrolia's claim to fame is that is was the site of the first major commercial oil discovery in North America, although many in Pennsylvania have long since debated this fact. With the influx of oil riches, the town grew quickly. Its main street, the Petrolia Line, is lined with enormous Victorian mansions, which housed a number of oil company executives.
The rail station was built in 1903, although rail service to Petrolia predated this station. The rail lines hosted oil trains and passenger service, since roads between the town and Sarnia were often unreliable "plank" roads (corduroy road) as they were called locally. It's interesting that passenger rail was seen as such a vital service, since Petrolia is not more than a 15-minute drive from Sarnia, but in the late 1890s, when a town was built in a middle of a marshy swamp, roads were at the mercy of the elements.
The town had one small problem. The station was built on the east-west main street, but there was no room for an east-west track due to the development along the street. The solution was a strange one. The railway built a track that ran north-south from the GTR main line between London and Sarnia. That meant that trains would reach a dead end at the station, meaning the station was actually a terminal (see image below from the Lambton County Archives). 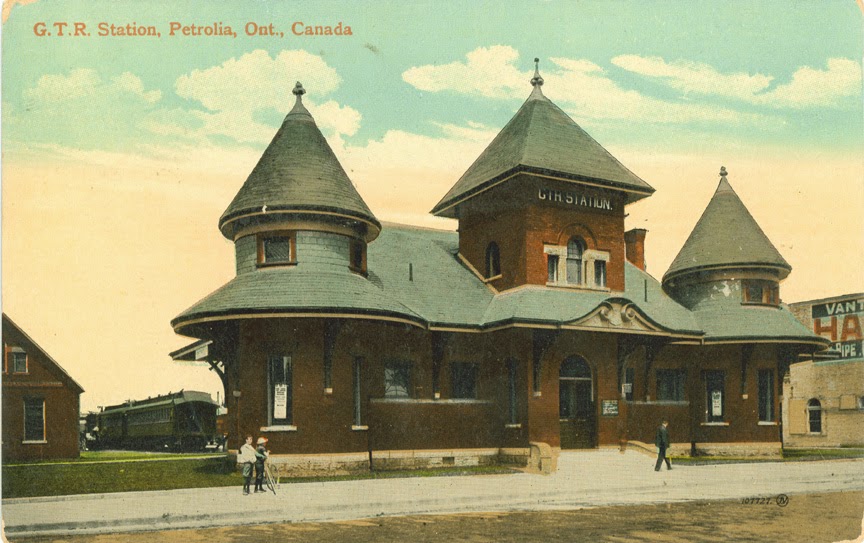 Here's another shot below of the back of the station in 1909 during the Old Boys Reunion (Lambton County Archives). As was the case in many small towns at the time, the train station was a focal point for town gatherings, since it was such an important gathering place for travellers. The tower behind the station is Victoria Hall, home of the town's civic offices and the famous Victoria Playhouse arts centre. The building still houses town offices and the theatre. 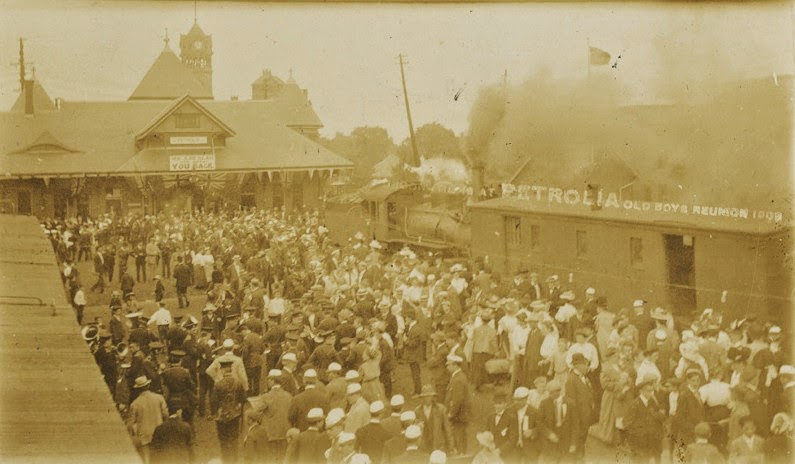 But, the usefulness of a terminal in a town so close to a major centre like Sarnia diminished. The Grand Trunk was purchased by the Canadian National and the station was closed in 1927, meaning the station's railway use lasted only 24 years. Luckily, Petrolia has always been conscious of its heritage, which led to the station being preserved, thanks to efforts of people like Robert Nicol (see below). 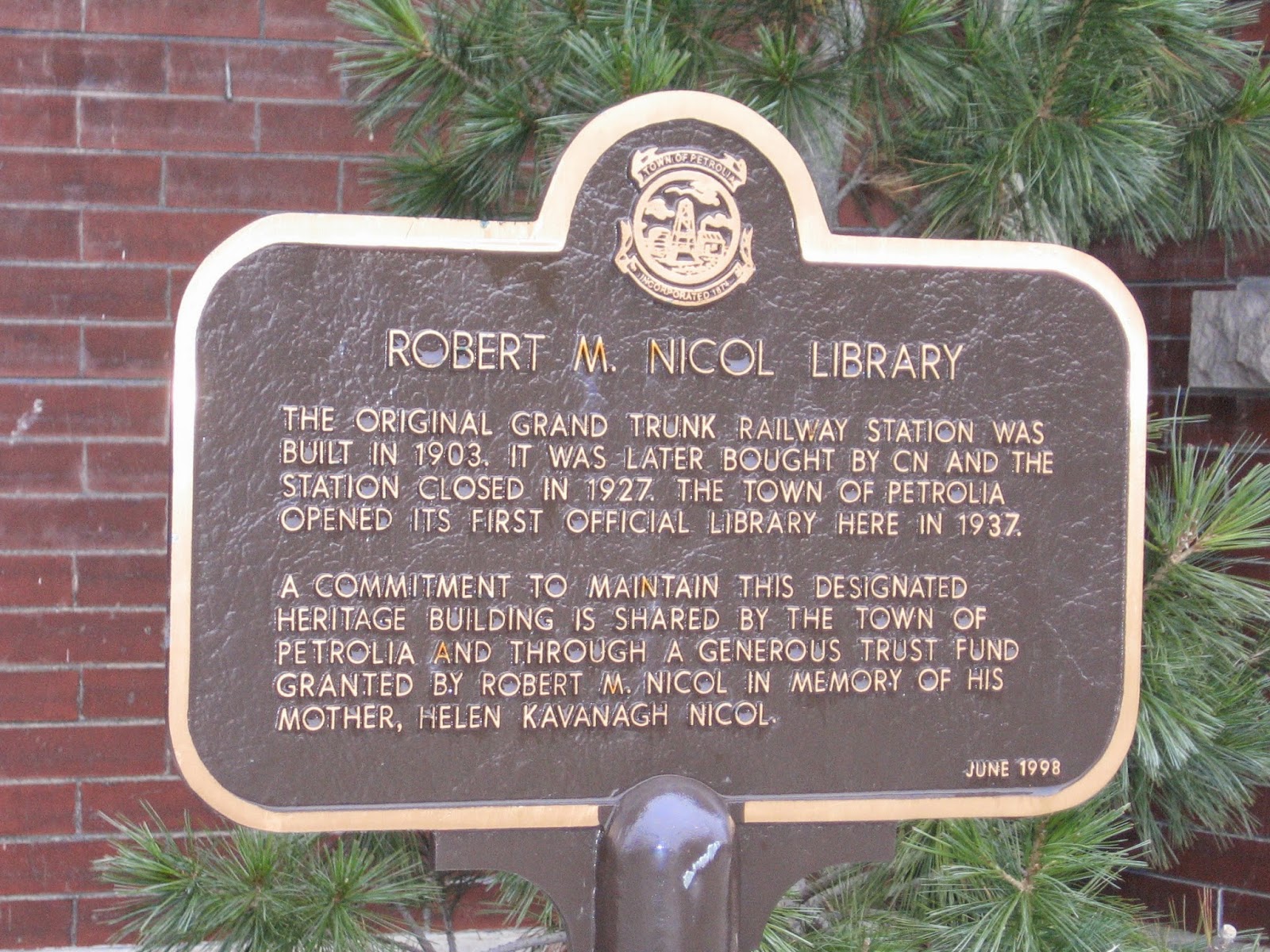 I made sure to get some shots of this building late last year. The shot below is the rear of the station where the trains reached the end of the line. 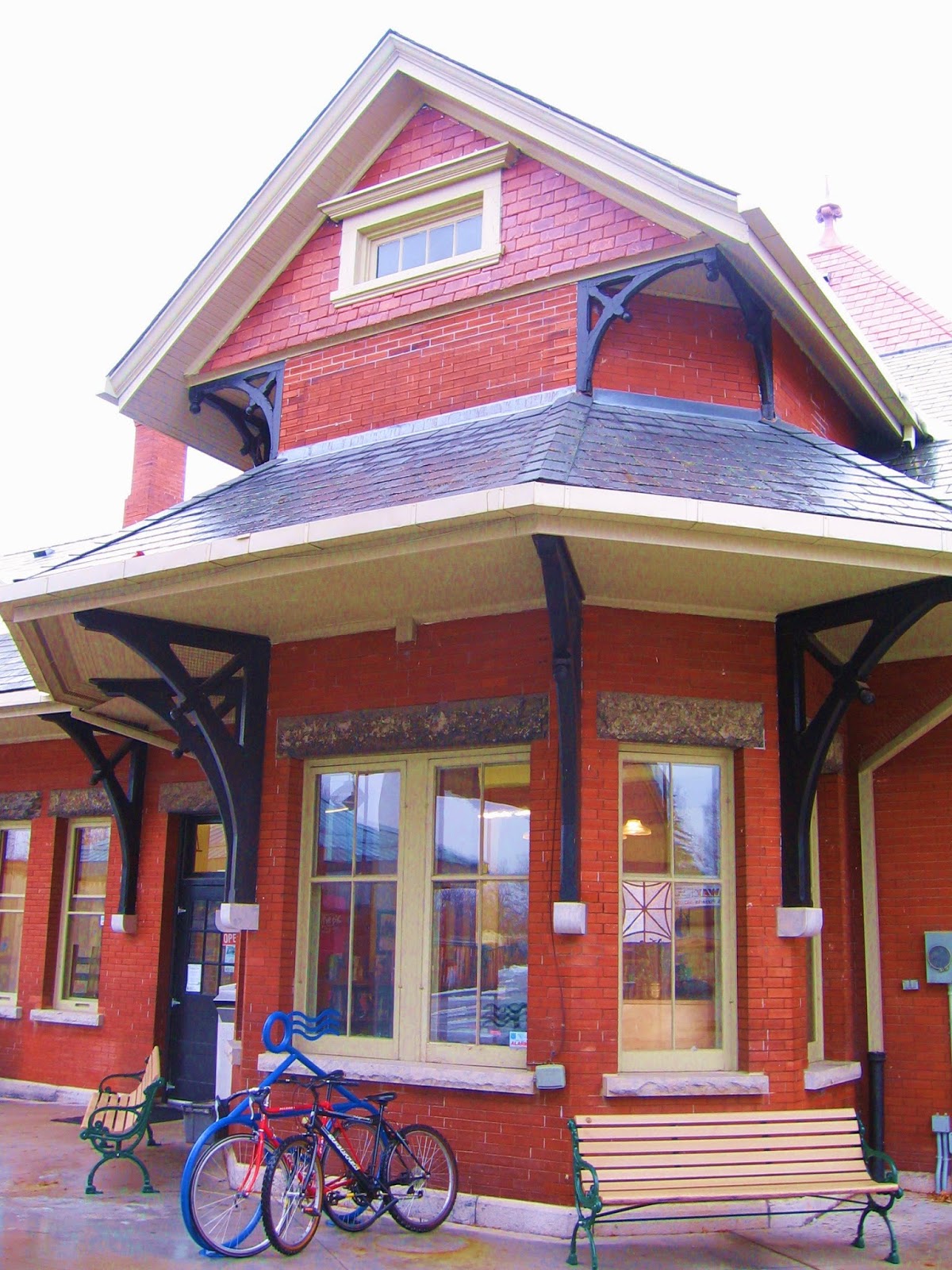 Even an old baggage cart has been preserved by local officials, although the CN noodle logo is a little out of place in this context, but that's nitpicking. 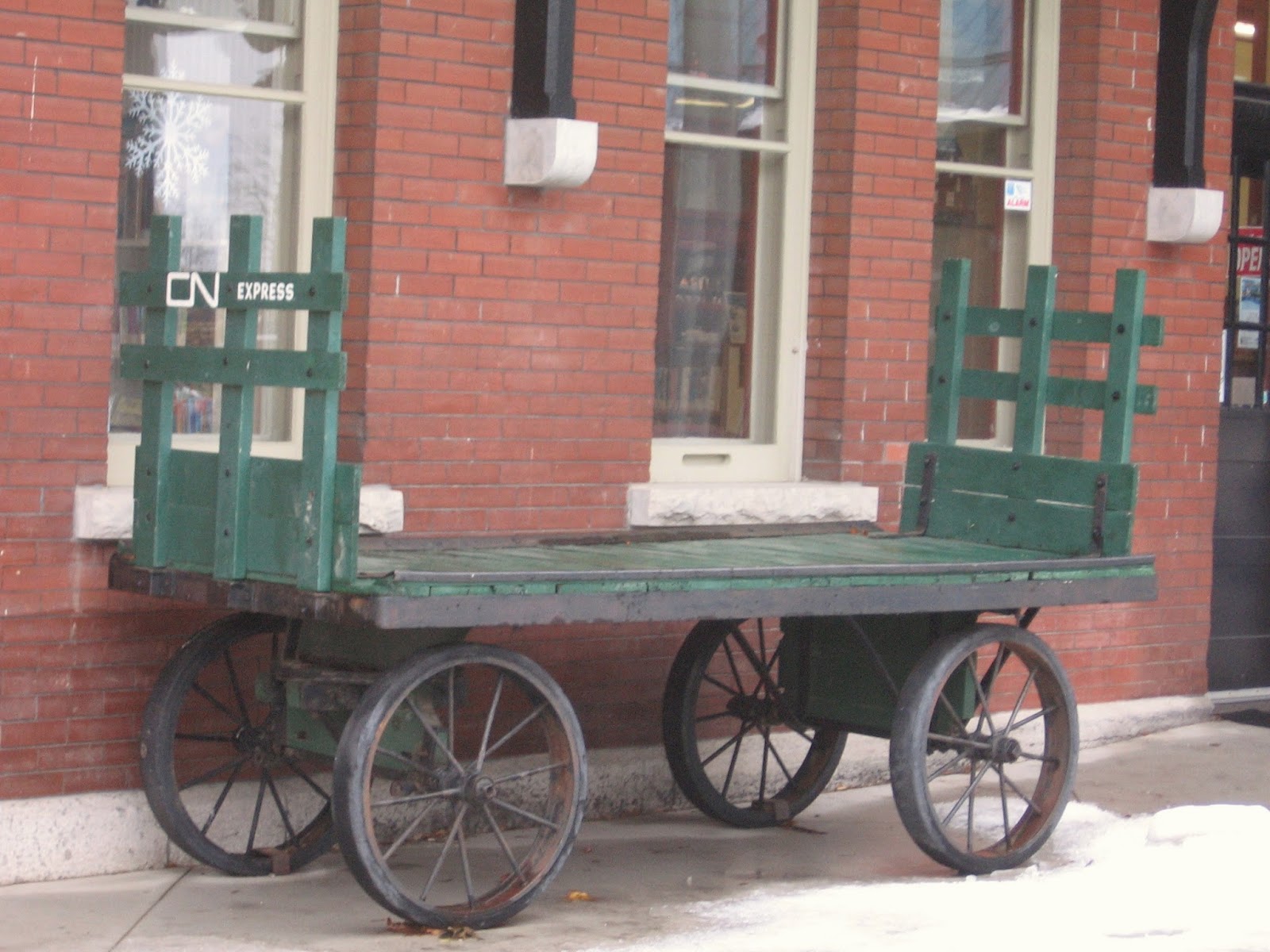 It's interesting to note that, at one time, Petrolia had another railway station, which belonged to the Michigan Central Railway's St. Clair Branch. That station was not preserved, as far as I know. Information about the MCR station is hard to come by, but I know that the Petrolia trackage was a spur off the St. Clair Branch, much like the Grand Trunk line was a spur off what is now known as the Strathroy Subdivision. Today, there are no tracks in Petrolia, although the only reminder of its railway past remains faithfully preserved.
﻿
﻿
Posted by Michael at Thursday, July 17, 2014

The MCR station still survives. It was cut into two pieces and moved to Brights Grove as two adjacent cottages on Lake Huron. You can still see the 'witch's hat' turret on one of these cottages. Feel free to contact me for pics...