The Summer of 1992 was a prolific time. Looking through my older prints, I noticed quite a number of interesting shots from that summer that are among my better catches. It was a good time for train watching in Sarnia, since the new St. Clair Tunnel had yet to be realized, meaning a number of trains and engines idled in Sarnia Yard. This was due to the bottleneck of oversized rail cars in the yard that had to be ferried across the river and the limitations of the old St. Clair Tunnel.

During summer, I made sure to check out the parked CN units outside the old roundhouse on the western edge of the yard. During my visits to this area, I took lots of photos of a variety of CN units, some with the CN North America scheme, some with the old safety scheme, some on their last legs and others that were shiny and new.

Then there's the unit below.

I came across this photo recently and uploaded it to my computer, almost as an afterthought. I initially didn't like the shot, since it was taken on the shady side of the unit. The print required a great deal of touching up, just to get it looking like this. I forgot about the print until a little while ago when I started searching for information on this odd-looking unit. It turns out, I had a picture of a rare bird. 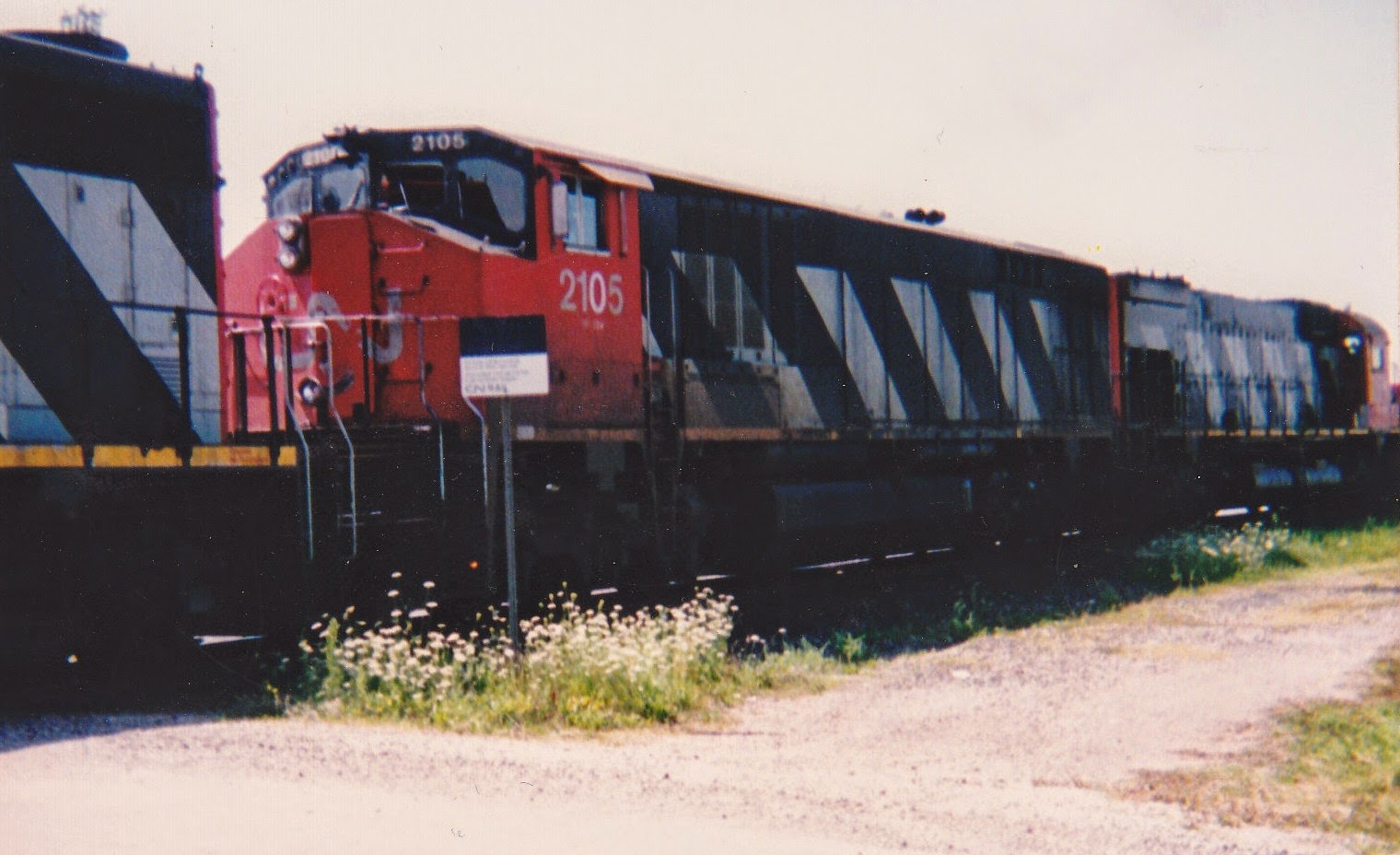 CN 2105 was a locomotive of particularly rare vintage. It turns out, this was a Bombardier HR616 unit (six axles, 16 cylinders, 3,000 horsepower). Finding information on this cowl unit was tough, since its number now belongs to a C40-8W. To makes things tougher, I had no idea this was a Bombardier unit. I assumed it was an EMD model.

After some research, I discovered that 20 of these units were built for CN at Montreal Locomotive Works in 1982, a few of them leased to the Canadian Pacific and renumbered in 1983, before being returned. Some refer to these units as MLW HR616s, due to where they were built.

Sadly, these units were terribly unreliable, even though the HR was supposed to stand for "Highly Reliable." This must sound like a familiar story to those familiar with Bombardier's other big foray into heavy rail locomotives around this time, the LRC locomotive. The shape of this CN locomotive reminds me of the "red barn" SD40-2Fs that CP rostered. For a comparison, here's a shot of one of those units taken by Steve Boyko in his blog, Confessions of a Train Geek.

This CN unit, 2105, was the first to be retired, after it was damaged in an wreck in 1993 in London, according to Wikipedia. Here's a shot of the unit when it was newly delivered to CN. You may notice how this unit has black paint around its front windows, which is a slight deviation from the CN paint scheme. Also, in this picture, you will notice that the ditch lights had been added to the front of the unit.

You will also notice an old Alco hitched up to 2105, to the right. I should have grabbed a shot of that one, but I guess I didn't.

But the shot of this cowl unit, a throwaway print by most measures, turned out to be a gem. Glad I hung onto it.

Notice the Century behind 2105? I need to go back to my notes to see what the frequency of Century operation was in that year, but it would be a lot less than the 1983 photo you linked to. It was remarkable that CN 2038 made it to the west coast in 1994, and I photographed it at Belleville on its way west:

Thanks for sharing this,
Eric

Nice photo - definitely a view on history. I never saw a CN MLW in action, or should I say, I never took any note of them when they were operating.

Thanks for the link to my blog!

Book contributor Brian Schuff of Winnipeg rode on the 7000's during their CP demo period.

Thanks for your comments, Eric and Steve. I'm glad that a seeming throwaway shot has generated some good discussion. I liked the shot you linked to Eric of the locomotive on loan to CP, complete with the CN colours minus the wet noodle.