You really do have to take what you can get in Ottawa when it comes to railways. Recently, I was struck by the fact that there are very few images of the city's O-Train going over the Rideau River trestle, near Carleton University. So I travelled on the Capital Railway for the first time the other day, getting off at Carleton Station. I walked down to the Rideau River to get a shot of the Bombardier LRT trainsets gliding over the river on the old CP Ellwood Sub.

I chose the perfect day, as it was sunny and the Rideau River was raging amid the spring thaw, which made for an incredible photo opportunity. Above: Northbound O-Train approaches the Rideau River trestle near Carleton Station. The river is in the midst of the spring thaw run-off.

I didn't have to wait long as the two O-Trains make the full 8-km trip on the Capital Railway every 12-15 minutes. The two trains pass each other on the double tracks at Carleton before heading in different directions on the single-track right-of-way. For more on this rail line, you can read last fall's The O-Train Rides Again post or my retrospective on the CP Ellwood sub.

The one challenge at this bridge is the commuter trains are nimble. They gear up quickly after leaving Carleton Station and also approach it from the south at quite a clip, so you have to have your shot set as they sprint across the bridge. The first one I shot (above and below) was a northbound train en route to Carleton and ultimately, Bayview Station at the end of the line. 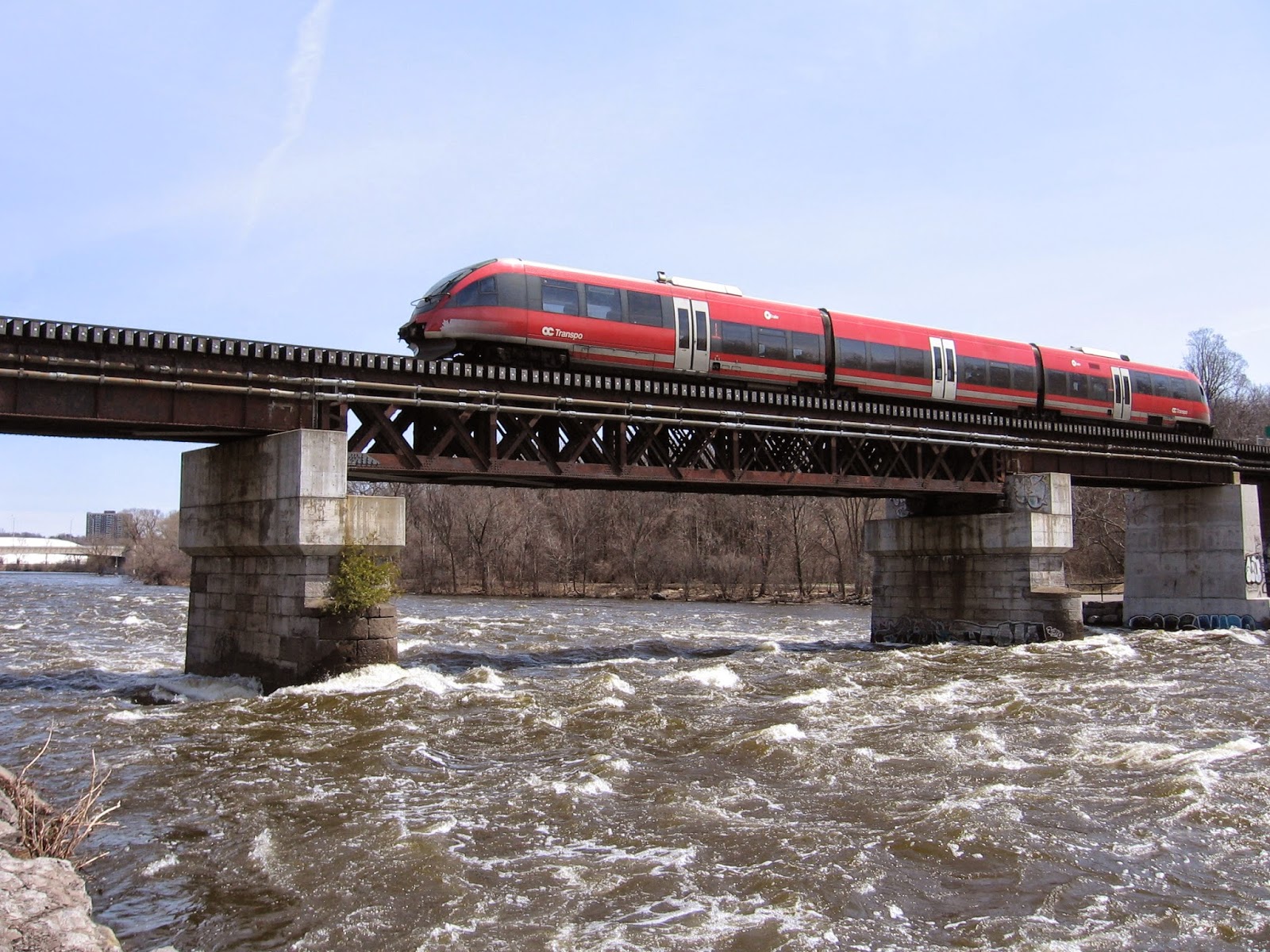 Hanging around this trestle brought me back to my time spent at Carleton, when the Ellwood Sub was still an active CP line. Of course, had I been actively taking pictures then, I would have grabbed some shots of freight trains using the bridge. Unfortunately, I didn't get any shots then. I do recall that CP ran most of its freights in the evenings, so it would have been a tough assignment even if I was actively tracking railways then like I was when I was in high school.

The shot below is from a southbound trainset headed in the direction of Greenboro Station at the southern limits of the Capital Railway (for now). There has been no further talk of expanding the railway south to the airport and beyond on existing trackage, but I am encouraged that this possibility was finally seriously considered in the fall (Although plans to exclude the airport as one of the stops on the extended line is a real head slapper). 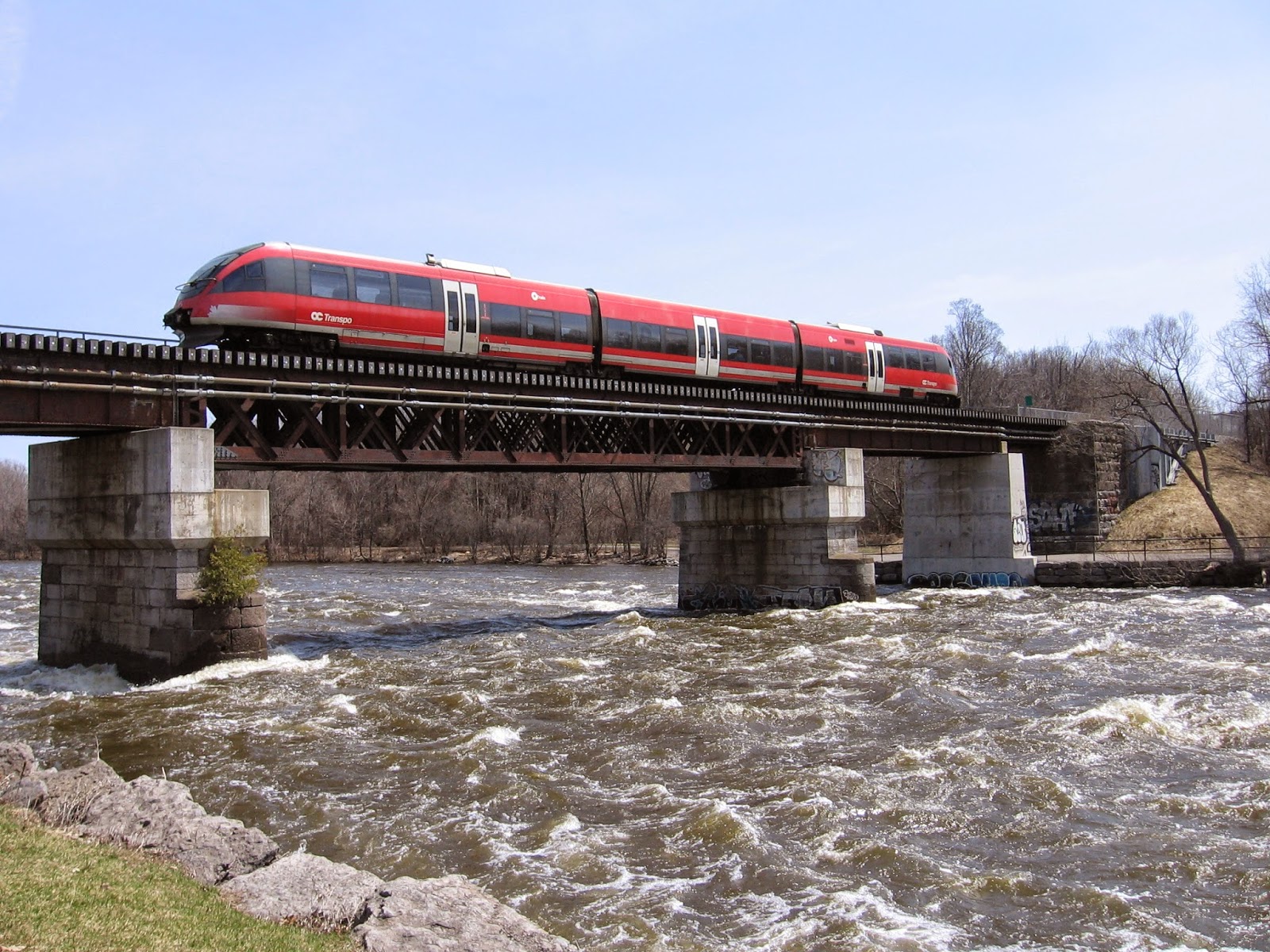 I was happiest with this shot since the framing was, as far as my limited skill allows, pretty close to perfect. The woodland on the other side of the river is Vincent Massey Park. In the summer, the levels on the river get so low around this bridge, you can see the rocks in the riverbed and can walk across the river to the park. This explains the half submerged graffiti on the bridge's pilings.

This line is a fun ride for a number of reasons. First, the northern section is nestled in a deep cut in the heart of Little Italy and Chinatown before it enters a long tunnel beneath Dow's Lake, which is part of the Rideau Canal. While on board the train to Carleton, I did notice that some of the work to ready this line for new trainsets and higher capacity traffic is still unfinished, but the new passing siding near Bayview appears close to being operational.

I also noticed that, in the midst of the work to refurbish the roadbed last summer, the Capital Railway's connection to the trackage leading to the Prince of Wales bridge (see my previous post on this bridge) over the Ottawa River has been buried by ballast. A curious sign still stands next to this forgotten trackage, which says "C.P." reminding all who would have veered onto this trackage that it was once a part of the venerable railway. Apparently, the city forgot to take down the sign when they bought this trackage and the bridge. Seems about right, since the city has done absolutely nothing with this trackage, which is largely lost in overgrowth now.

Next week: More on the status of the Prince of Wales railway bridge.
Posted by Michael at Thursday, May 22, 2014

Good shots. That was quite some spring thaw this year: it was nearly flooded, and the spot you took your photos from blocked off, when I was there in April. Didn't catch any trains though, but they sure have parking priced to encourage riding...

Thanks for the comments, gents. Bryan, you're right that the spring thaw has been massive this year. In addition to the Rideau River levels being quite high, the Chaudière hydro dam gates have been wide open for days, most likely due to the fact that floodways upriver have been open for days as well. It's all causing rapids on the Ottawa River in the downtown core that I have not seen in years. The river has been racing for weeks.

Not far south you can find the remains of the connecting track that VIA used to connect at Elwood. It's pretty overgrown and the switch is gone, but the track is still there.

Interesting observation, Keith. I checked out the area with Google maps and am now motivated to see this old connection in person. This old connection between the Via main line and Ellwood was likely a busy switch when CP ran RDCs up to Maniwaki, Que. and back.

I've wanted to check that spot out for years. I used to drive by it everynight on my way home from work, there's just nowhere close to park.

I'm not sure if any RDC's from Wakefield would have ever used it. From what I've been able to find, passenger service was discontinued on the maniwaki sub in 1963 or 1964. There were definitely VIA RDC's that would have used it though up until 1981.

I've got photos in a book called "Canadian Railways in Pictures" by Ottawan Robert F. Legett that shows a CP RDC parked in Maniwaki, on that line. Perhaps it is an older photo than I thought. But, you're right, Via would have used it most recently.