The long shadow of last September's horrific train-bus collision continues to pose a huge problem for Via Rail in Ottawa. While there is still very little to explain how this collision on Woodroffe Avenue occurred, Via continues to struggle to explain why a number of level crossings in the Barrhaven neighbourhood continue to malfunction.

Five people on board an OC Transpo double-decker bus died in the September accident, including the bus's driver. No one on the train was seriously hurt.

For Via Rail, that accident was the beginning of a very serious problem in Ottawa's southwest end. The main problem the railway faces is that there are multiple crossings in this suburb that continue to malfunction, resulting in the crossing signals and gates kicking into failsafe mode, which means the lights and bells are triggered while the gates descend, even when no train is coming. The problem spots include Woodroffe Avenue and Fallowfield Road, the two level crossings on either side of Via's Fallowfield Station.

Recently, Via issued a statement that assured residents that the warning signals at four of the level crossings had been fixed. Unfortunately, the lights at the Fallowfield Road level crossing malfunctioned April 28, shortly after Via issued its statement.

Meanwhile, the railway continues to deploy personnel at the Woodroffe Avenue crossing and have reduced the speed of trains near this crossing. 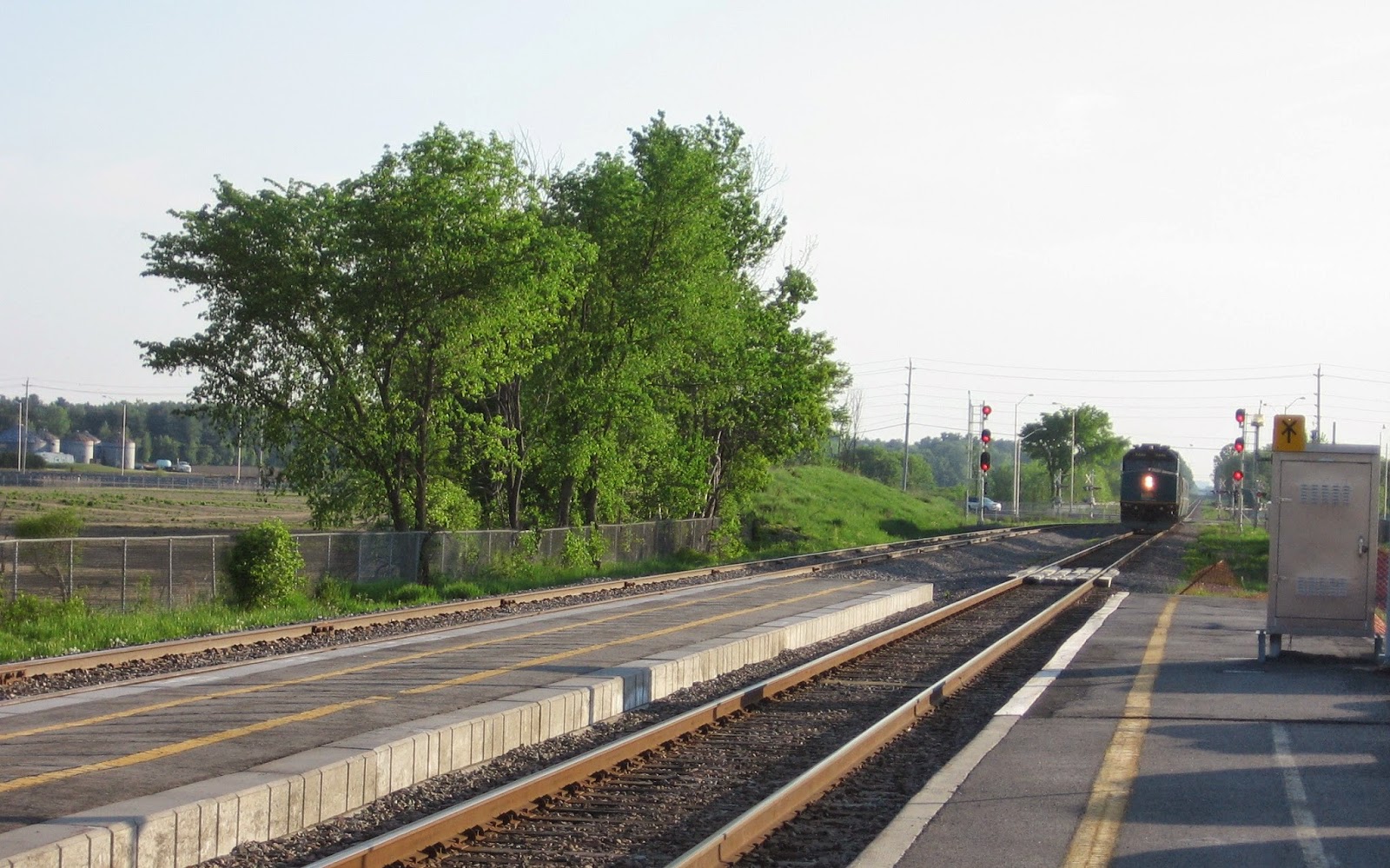 An F40PH-2 leads a Via corridor train over the Woodroffe Avenue crossing on Victoria Day 2012 on its way to the Fallowfield Via Station. Photo was taken from the Fallowfield Station platform.
Making matters worse, a fair bit of misinformation has not reassured Barrhaven residents. There was speculation that there was sabotage happening at these level crossings, which had the Ottawa Police involved. The railway has since made it clear that this was not the case.
However, the railway has also suggested that the faulty equipment might be the result of the salt used to keep the right-of-way clear as well as the salt used to clear roads. Another suggestion made was that some nearby electrical wires are interfering with the crossing signals.
Most recently, Via issued a statement stating that two OC Transpo buses failed to stop behind the crossing gates, meaning they stopped for a passing train beneath the descending gates, which caused the gates to be damaged and again triggered the problems with the crossing signals reverting to failsafe mode. That theory was shot down by eyewitness accounts that suggested otherwise. When this theory was refuted, the city asked Via to retract its comments. And last week, the MP for the area, Foreign Affairs Minister John Baird, called for Via's CEO Steve Del Bosco to resign. And that is just what the Minister received as Via made the change in early May.
In the midst of all this confusion and finger-pointing, no definitive cause for these problems has been identified yet. The railway and RailTerm, the company that maintains the Smiths Falls Subdivision for Via, suggested a number of factors are affecting these signals. To make things more confusing, the cause of the malfunction at one crossing isn't necessarily the cause of the malfunction at another crossing, according to Via. These issues have been plaguing this corridor since February.
Read about Via's technical briefing with city officials here. Reading this story, you will get a good idea of how uninformed many in this city are about railways, which is understandable since much of the remaining rail network in the city is out of site and out of mind for most. But, for a columnist with the Ottawa Citizen to suggest that Barrhaven has the highest concentration of level crossings in Canada is downright silly.
Via has also posted material on its website explaining what it is doing to correct the problems in Ottawa. 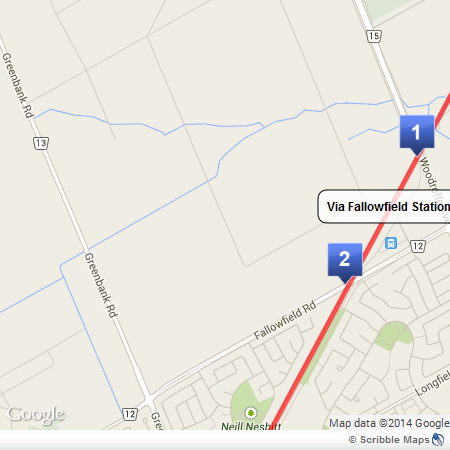 Here's a small sketch (above) of the track around Fallowfield Station. As you can see, the track crosses many of the roads in Barrhaven at an angle, making the crossings somewhat awkward, especially during rush hour. Marker 1 is site of accident on Woodroffe Avenue. You can see the the thin grey line merging onto Woodroffe. That is the OC Transpo Transitway where the bus collided with the train in September. A separate signal is now being installed for this bus lane. Marker 2 is the Fallowfield Road level crossing. There is a similar crossing at Greenbank Road, Jockvale Road, Cedarview Road, and Moodie Drive, although the crossings get less busy as you head west. 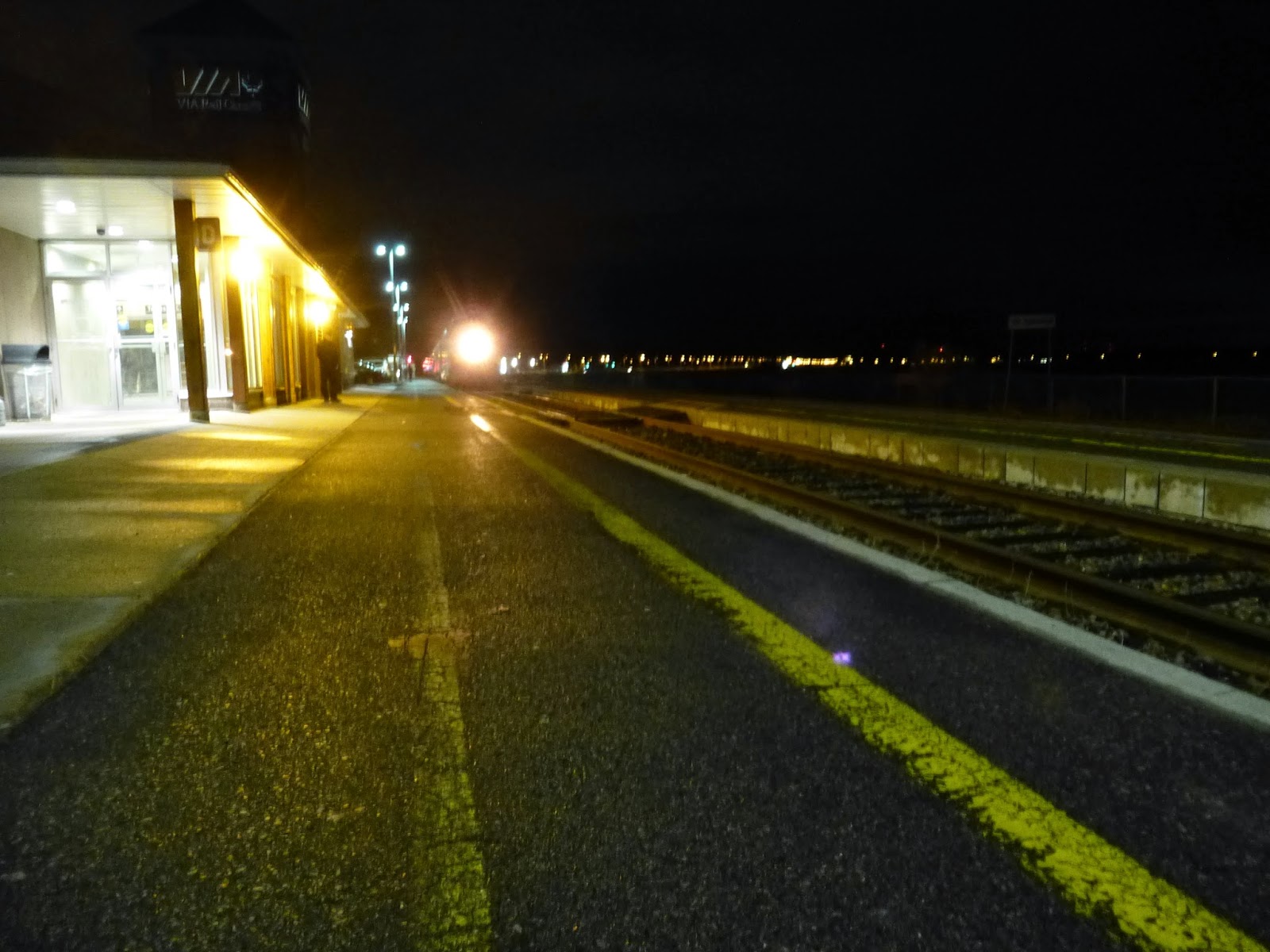 Above: Via corridor train makes its way into Fallowfield Station at 11 p.m. on April 27.

I noticed an increased presence at the station when I picked up a friend who was visiting from Toronto recently. I also noticed that the personnel were watching me take photos. So clearly the railway is keeping a close eye on its assets in the area. 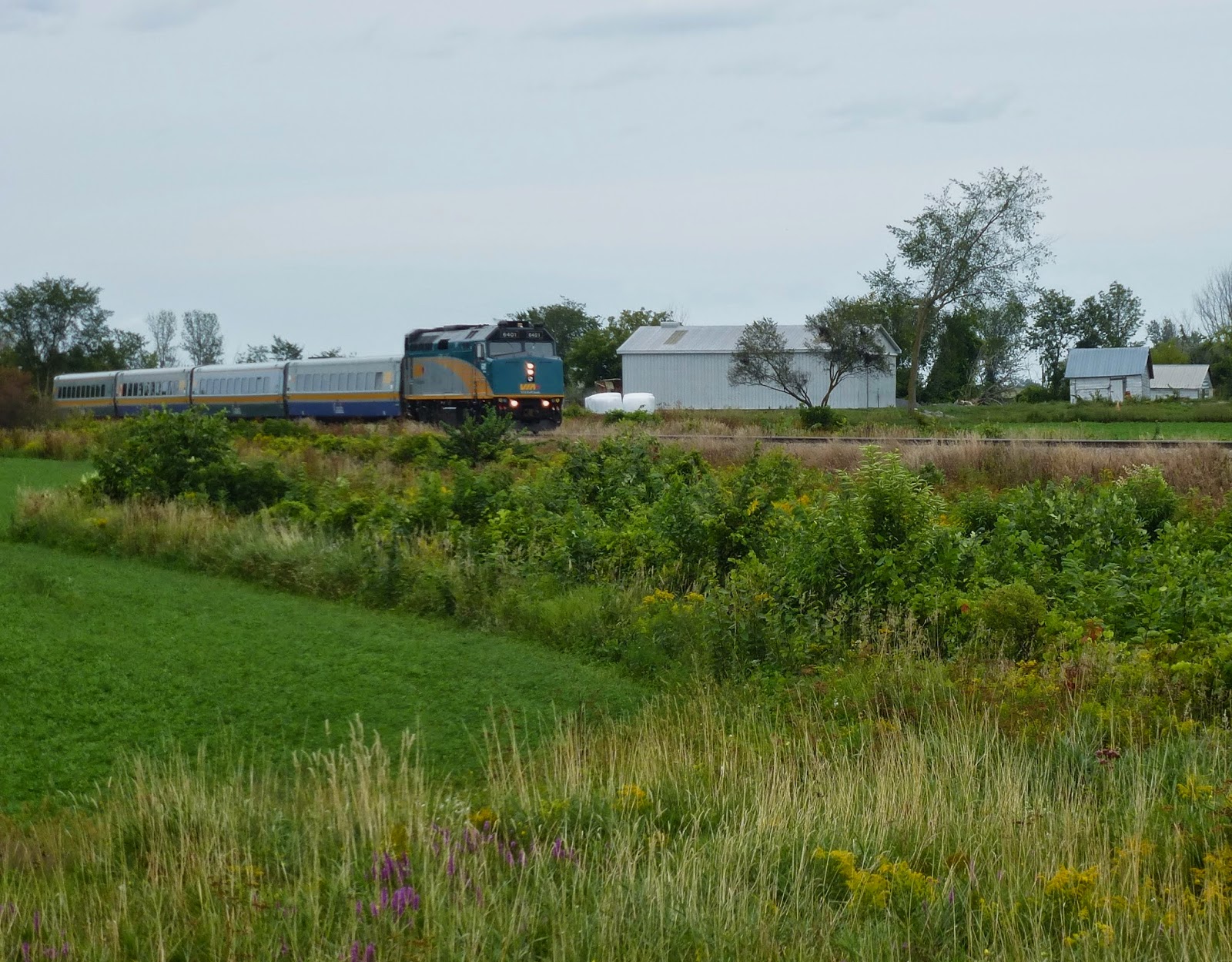 Train 657 makes its way southwest toward Toronto near the Moodie Drive crossing on August 25, 2013.

So, for the time being, it appears Via is apparently close to correcting the problems at most of its crossings, although much remains to be done. Given what happened last year and what's at stake, answers can't come soon enough.
Posted by Michael at Thursday, May 08, 2014

Thanks for presenting the facts, Michael. I'd avoided reading the many emails from VIA because they seemed at least tail-covering, and at most confusing, possibly obfuscating.

Some of the reasons (excuses?) suggested by those involved are somewhat laughable, plus layer on the municipal (and federal) politicking and you have a sticky mess there. Not to mention the recent memory of the bus crash you also profiled on The Beachburg Sub.

Unfortunately, I guess there's something to be said for 'Stop, Look, Listen' for all users of those crossings. Here on the CN Kingston Sub, I take nothing for granted approaching a crossing. Sure, I'm always hoping to see a train, but I keep a weather-eye out regardless of the level of protection offered.

Good summary of the situation. I had to sit through this slow order last month on my voyage to Ottawa. Barrhaven has a history of NIMBYism regarding the railroad, but that bus accident certainly puts a finer point on the problem. I see today that VIA has a new CEO on the way now...

Thanks for the comments, gents. The situation has really degenerated into pettiness, which is sad. And, as you mentioned Bryan, it appears that the Minister Baird-fuelled NIMBYism has indeed led to a change atop Via. It's a fluid situation to be sure.