A year ago today, I posted my first entry on this blog. Without dwelling too much on a year, here are a couple of observations on the past year.

Observation 1: Much to my surprise, the Canadian National Beachburg Subdivision, from which this blog takes its name, is still standing. For how long? I suspect it will be gone by the end of this spring, but stranger things have happened. With it, the last remnants of a transcontinental rail line will disappear from the Ottawa Valley. 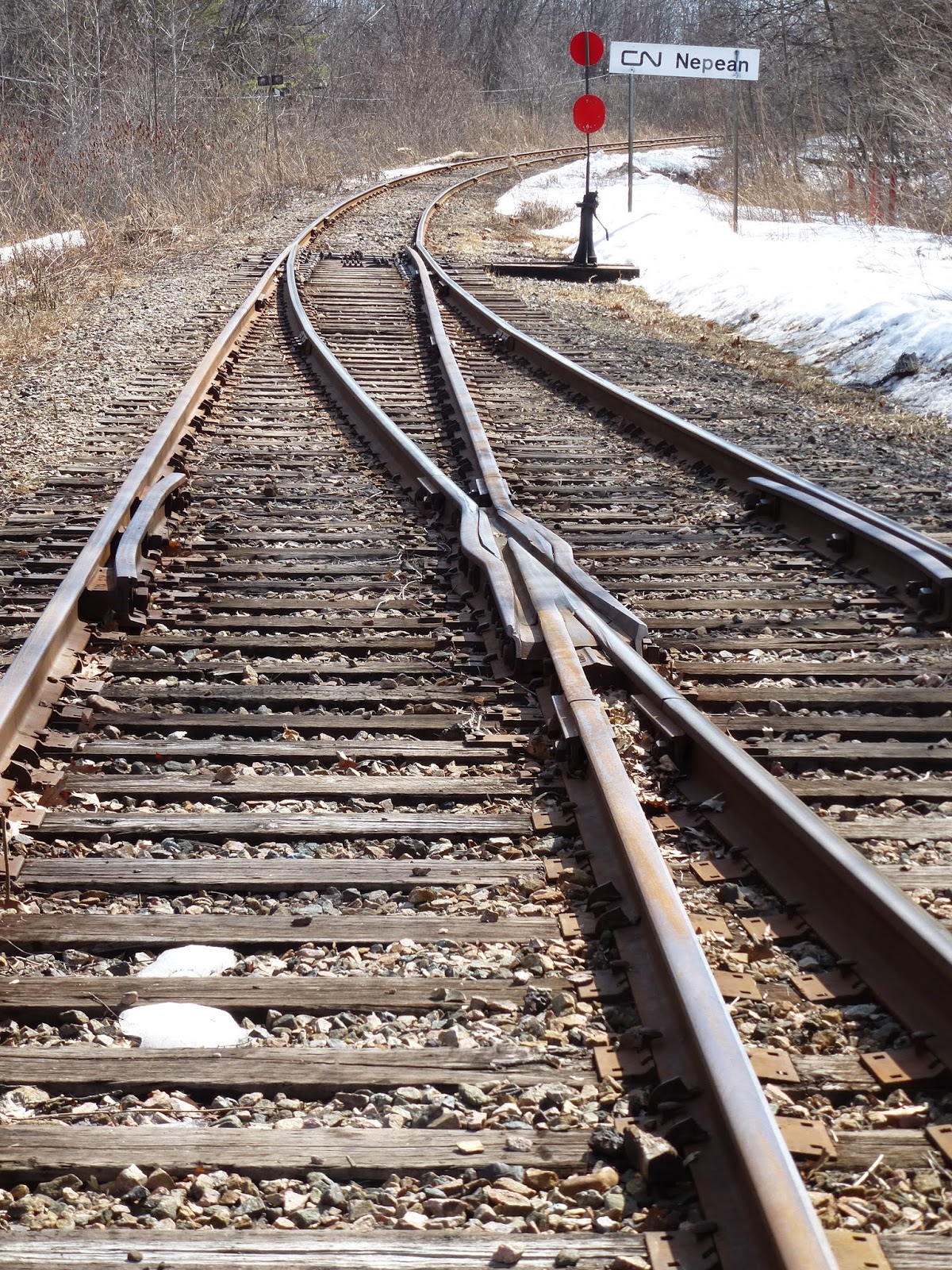 Observation 2: There's treasure everywhere. Even in Ottawa, I have found that it is possible to maintain a railway blog, provided you really, really scour around for photos. This is one photo I took this past weekend when I finally caught CN Local 589 on the Via Rail Smiths Falls Subdivision, headed toward Richmond. To catch this train on this track, you need to be at the right place at the right time twice a week, since this is twice-weekly out to Richmond. More on this to come. 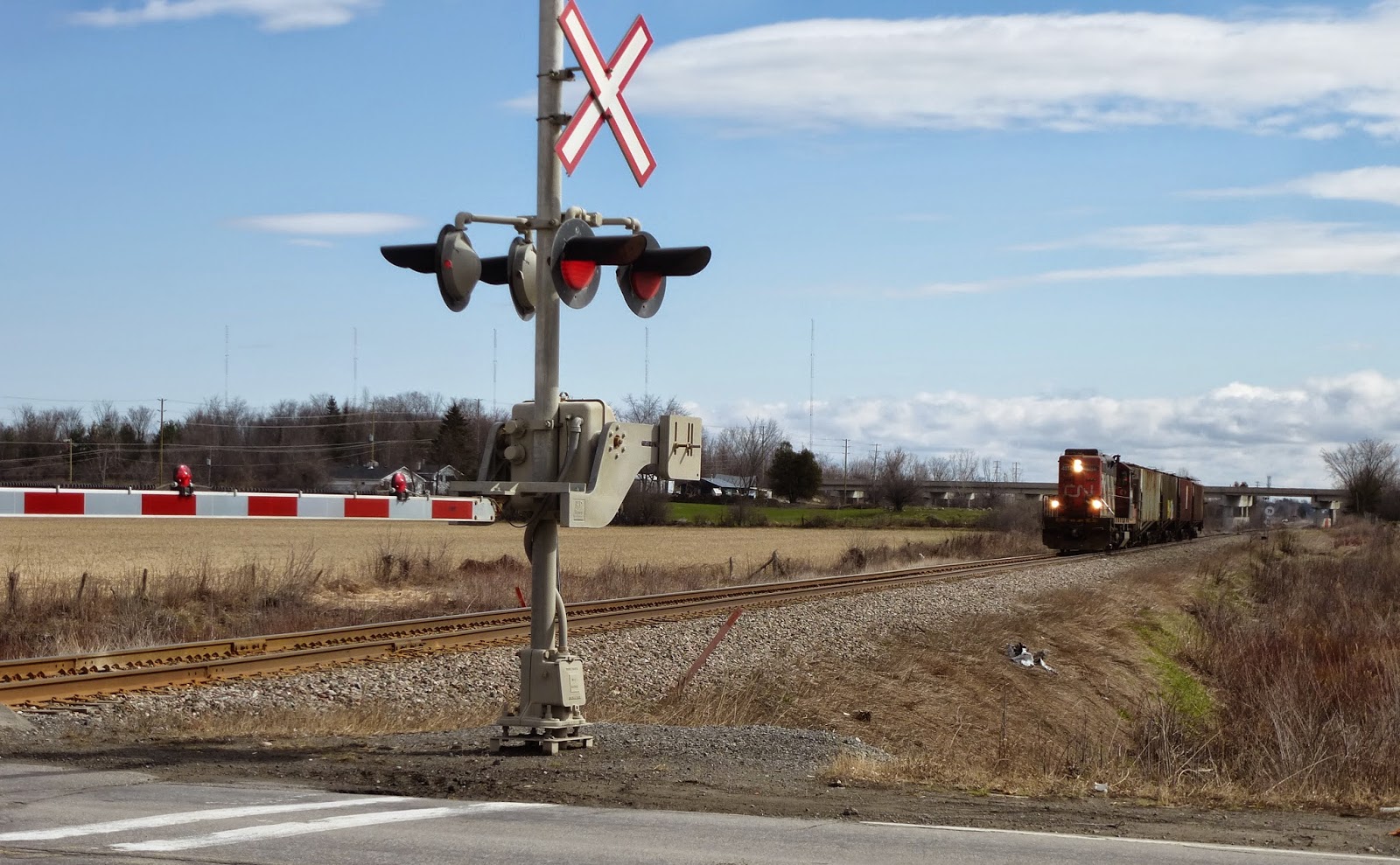 Observation 3: Throwing away film is perhaps the dumbest thing I have ever done. The next dumbest thing is throwing away old prints that I didn't deem to be interesting at one point. When it comes to railroading's past, everything is interesting, I'm finding. Sadly, this is a realization that came too late. This shot below, taken July 20, 1993, is one of a few rolling stock photos that I kept from my archives. I'm glad I did, but it only makes me pine for my shots of the Central Vermont and Burlington Northern rolling stock that were thrown out. 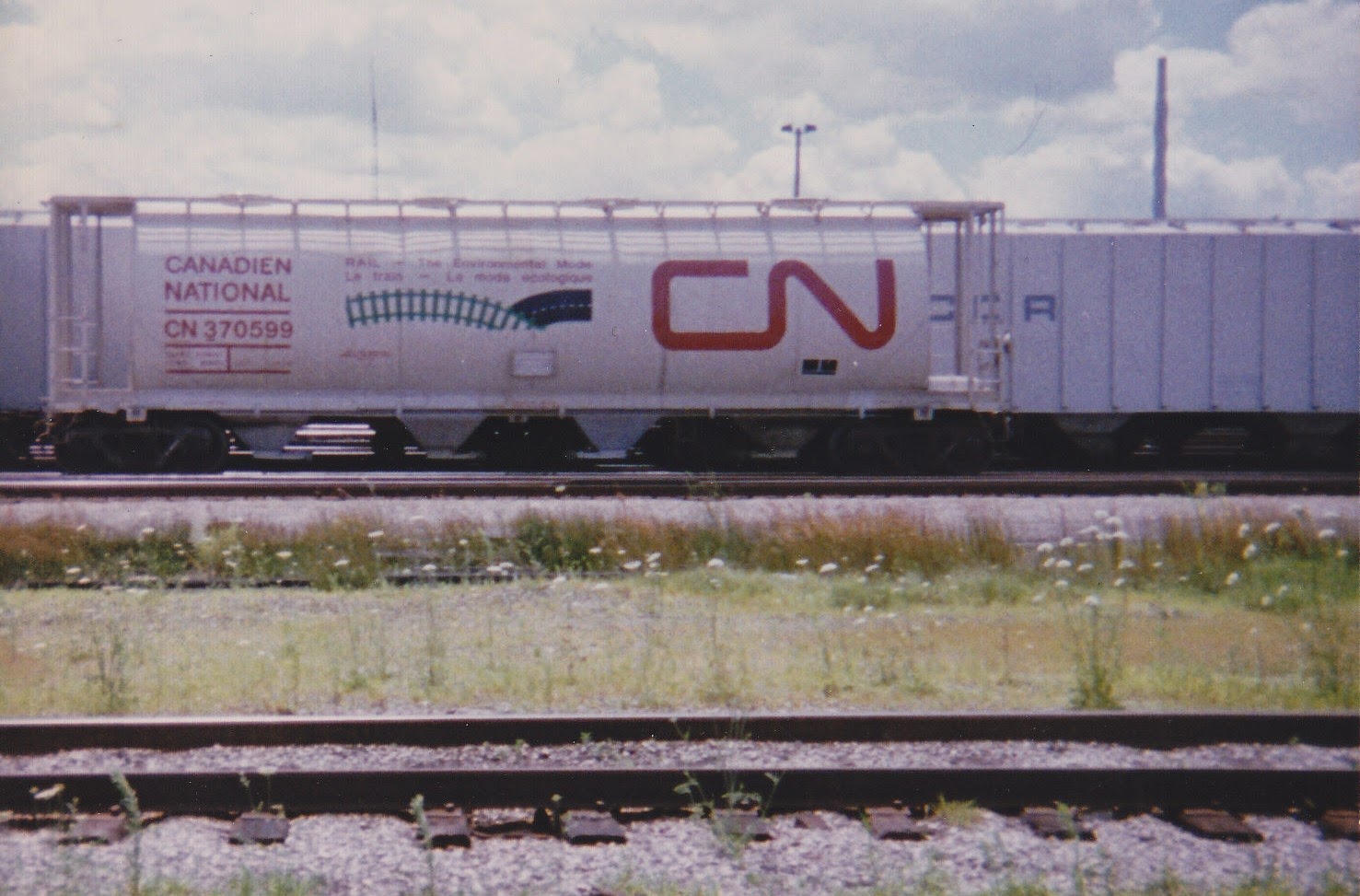 Observation 4: When life hands you lemons... I have tried over the last year to present a mix of photos that tells the stories of railroading in Ottawa as well as other locales in Ontario and occasionally elsewhere. Since the opportunities for train watching here at limited at best, it means you have to look for opportunities to get creative shots. This shot is one of a few that were taken on a very windy day in January. I've taken many shots at the central Via station, many of which I have not posted, but I do try and share the ones that are a little different or tell a story. Like this one. 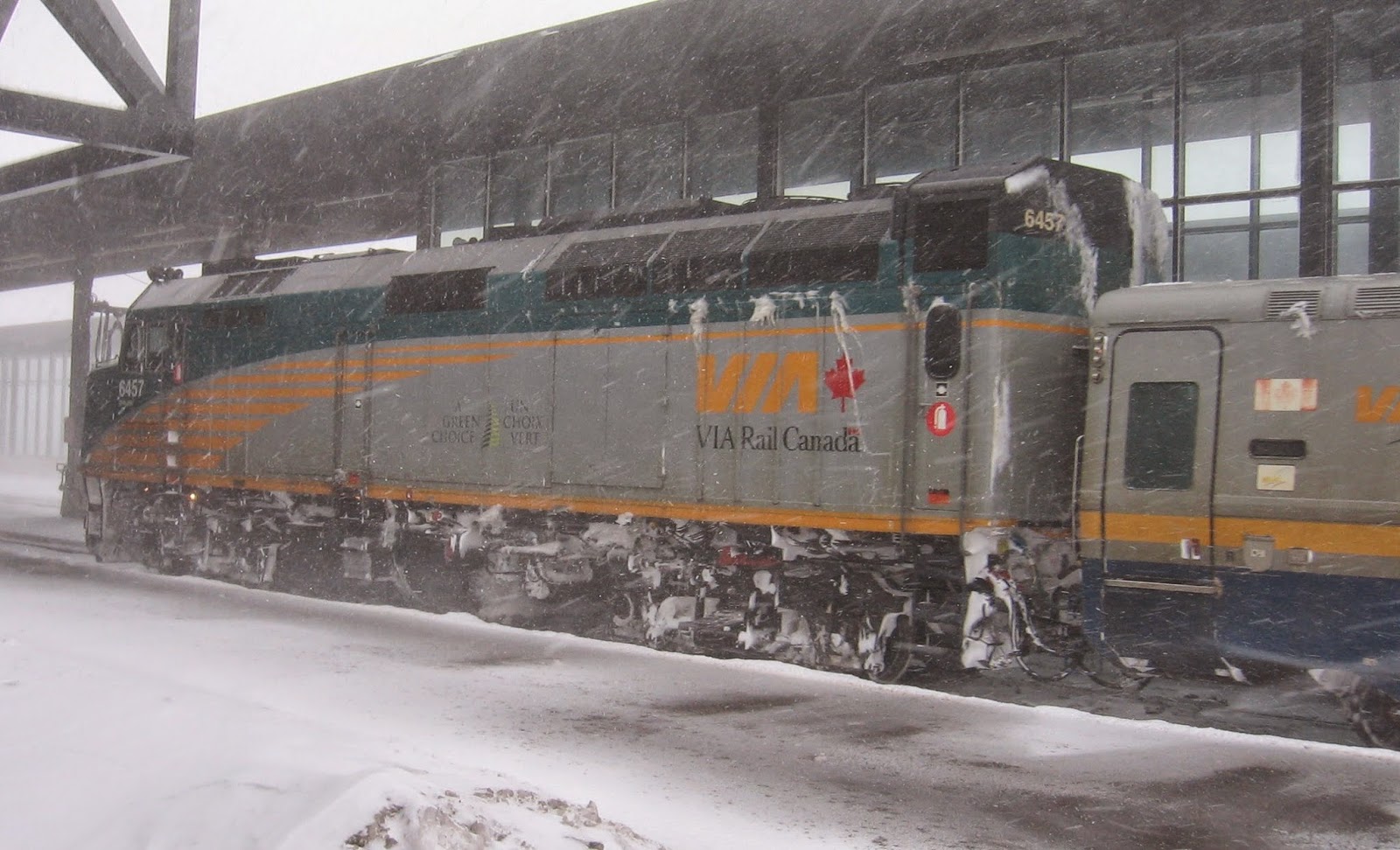 Observation 5: This blogging thing is fun. I was a little reluctant to start blogging, since there are many knowledgeable people out there who know far more than me. I didn't want to create an uninformed blog that was scoffed at by the experts. This has made some posts tricky, due to the limits of my knowledge. But, thanks to a very forgiving and supportive community out there, I have learned a lot and I hope to have returned the favour a bit. The shot below is of me at the Canada Museum of Science and Technology next to CN's Northern steam locomotive 6400. 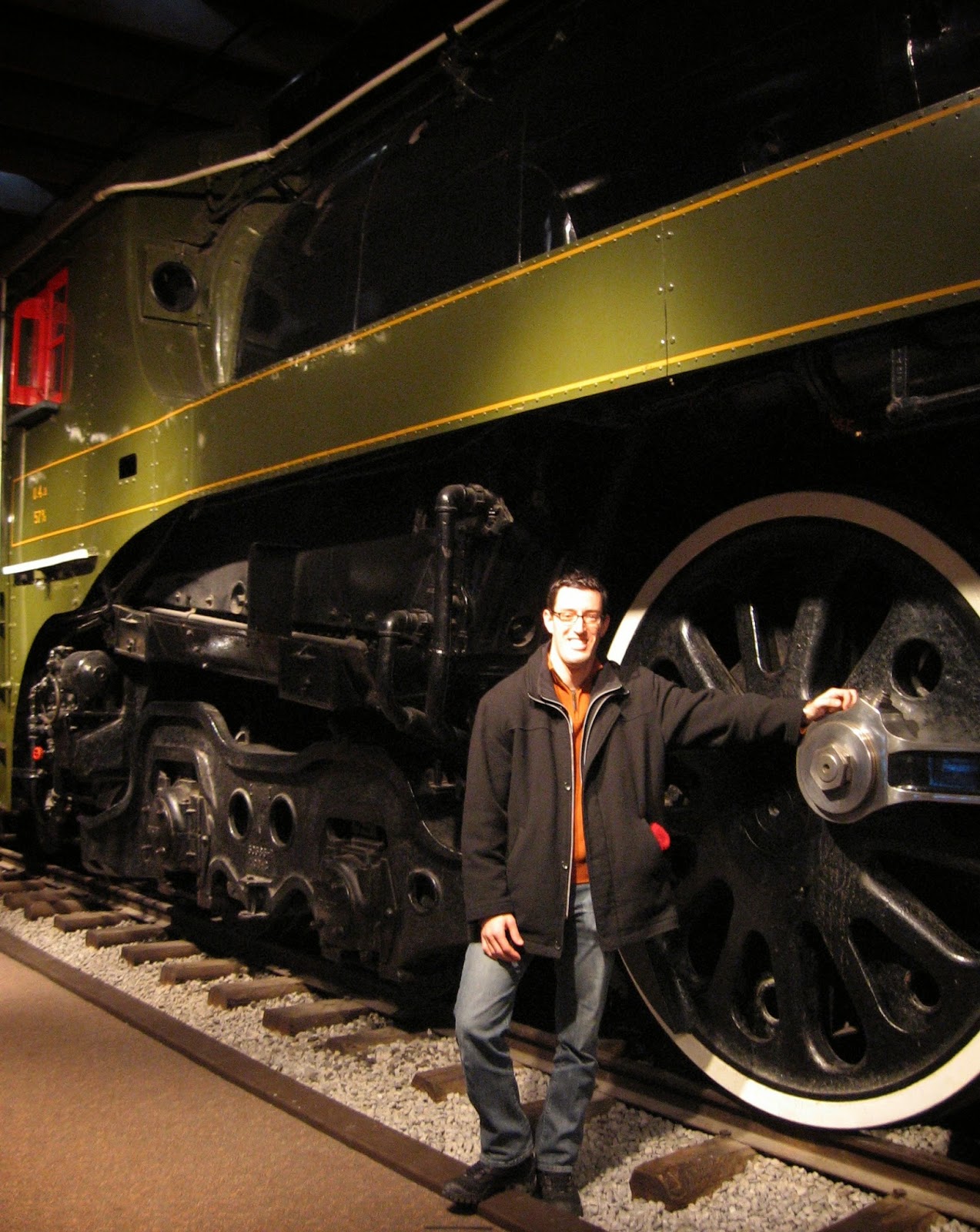 So, those are just a few thoughts from the past year. The Beachburg Sub thanks all its readers for their support over the initial year, especially those who took the time to leave messages or to educate me when I was a little off the mark. Over the last few weeks, I have collected a fair bit of material that will begin my second year with a bang. All Aboard for the second year!

I've enjoyed reading your posts over the past year. Looking forward to more over the next year, and the years to come.

Congratulations on your blog-iversary, Michael! Whether or not the Beachburg Sub survives, you can immortalize it here and keep it alive with more and more posts.

Blogging is indeed fun. It's manageable, a great way of sharing and gaining information, and presenting photos with descriptions, even telling a story.

I look at it this way - I enjoy blogging: arranging, organizing, formatting photos and facts, and if others enjoy it, too, so much the better!

Keep up the great work!
Eric

Thanks Eric and JD. I hesitated to put together this post, as it will be seen by some to be fishing for compliments. To be honest, I'm surprised the blog has reached a year and has managed to cover so much ground. Your kind words are appreciated.

Congratulations! I look forward to another year.

PS: I was back in Ottawa recently for the first time in years...what happened to all of the cars that used to be stored from Bells Corners Junction onwards? Is CN no longer in the car storage business (ripping up the rail is worth more...)?

I haven't been to Bells Junction in a while, Bryan, so I don't know if they ripped up the last remainder of the old spur where the hoppers were stored. They got rid of the cars when they were busy ripping up the Beachburg Sub last spring.

Congrats on the 1st year, that shot of #589 is a perfect layout sized train.

Great blog. It's sad that Ottawa's once busy railways have been reduced to practically nothing. Too bad the Prince of Wales Bridge doesn't get put back into service for freight or passenger service. It will probably be the next to go.

Keep up the good work.

Nicholas, I never thought of 589 that way, but you're right, it's the perfect layout sized train, especially on my tiny N-scale layout at home. Thanks for your comments, Keith. I share your thoughts about the Prince of Wales bridge. Sadly, I don't see anything good in its future (more on this in a future post).