There is no structure quite like a railway roundhouse. The architecture of these structures makes them engineering marvels to many a railfan, but their industrial legacy makes them sadly disposable. In most cases, these structures are lost to history. Here at the Beachburg Sub, we celebrate history. With this in mind, I present the case of the Ottawa West CPR roundhouse, the Canada Southern Windsor roundhouse and the CN Sarnia roundhouse.

I will start with the Sarnia roundhouse, since it is the structure I am most familiar with, and it is the only one of the three that is still standing. This roundhouse is located at the west end of CN's Sarnia yard. It was a busy facility into the early 1990s as it serviced dozens of CN units large and small. Here's a picture of a roster of CN units just outside the roundhouse in 1991. In the photo below you can see a few yard switchers including GP9 7266, SW1200 1317 and a few others, not to mention GP40-2LW 9491 front and centre. 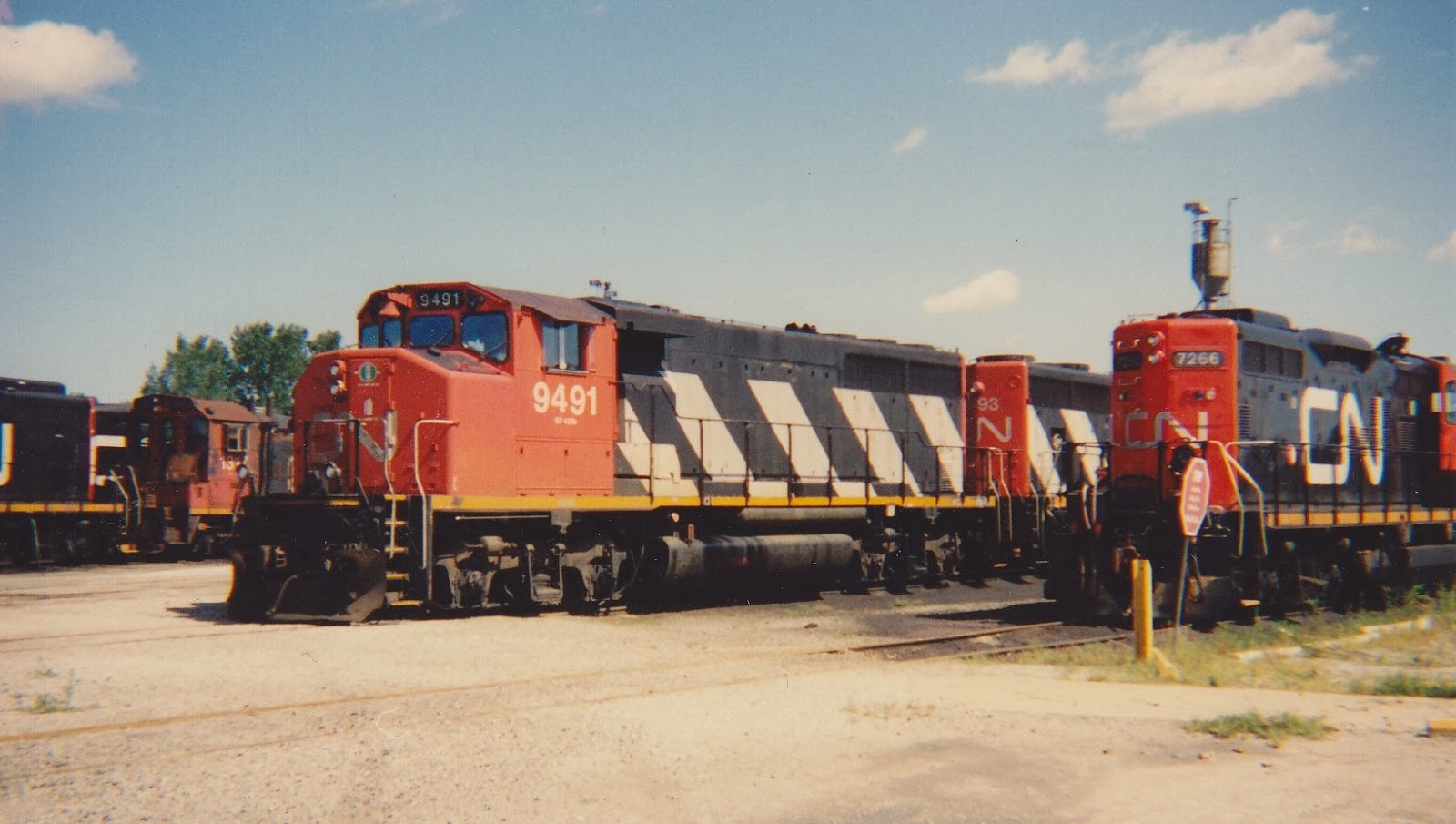 As you can see from this below photo, the roundhouse was still in reasonable shape in the early 1990s, although getting a shot from public property was tough since there was usually something blocking the view, including these gondolas, in 1991.

Luckily, for rail enthusiasts in this area, the roundhouse was kept intact when Lambton Diesel Specialists (LDS) took over the facility in 1992 and assumed the diesel servicing operations from CN. This shot, taken Oct. 13, 2013, shows how things have changed at the roundhouse. The actual turntable is long gone, but some of the bays are still there (most boarded up) and are used for rehabbing locomotives from a number of railways. Also, the old windows have been replaced. The roundhouse is an interesting place to shoot some locomotives you might not otherwise be able to see. It also gives you one last chance to snap photos of units before they are scrapped, like CN SW1200 7316, which appears to be in the process of being scavenged for parts. 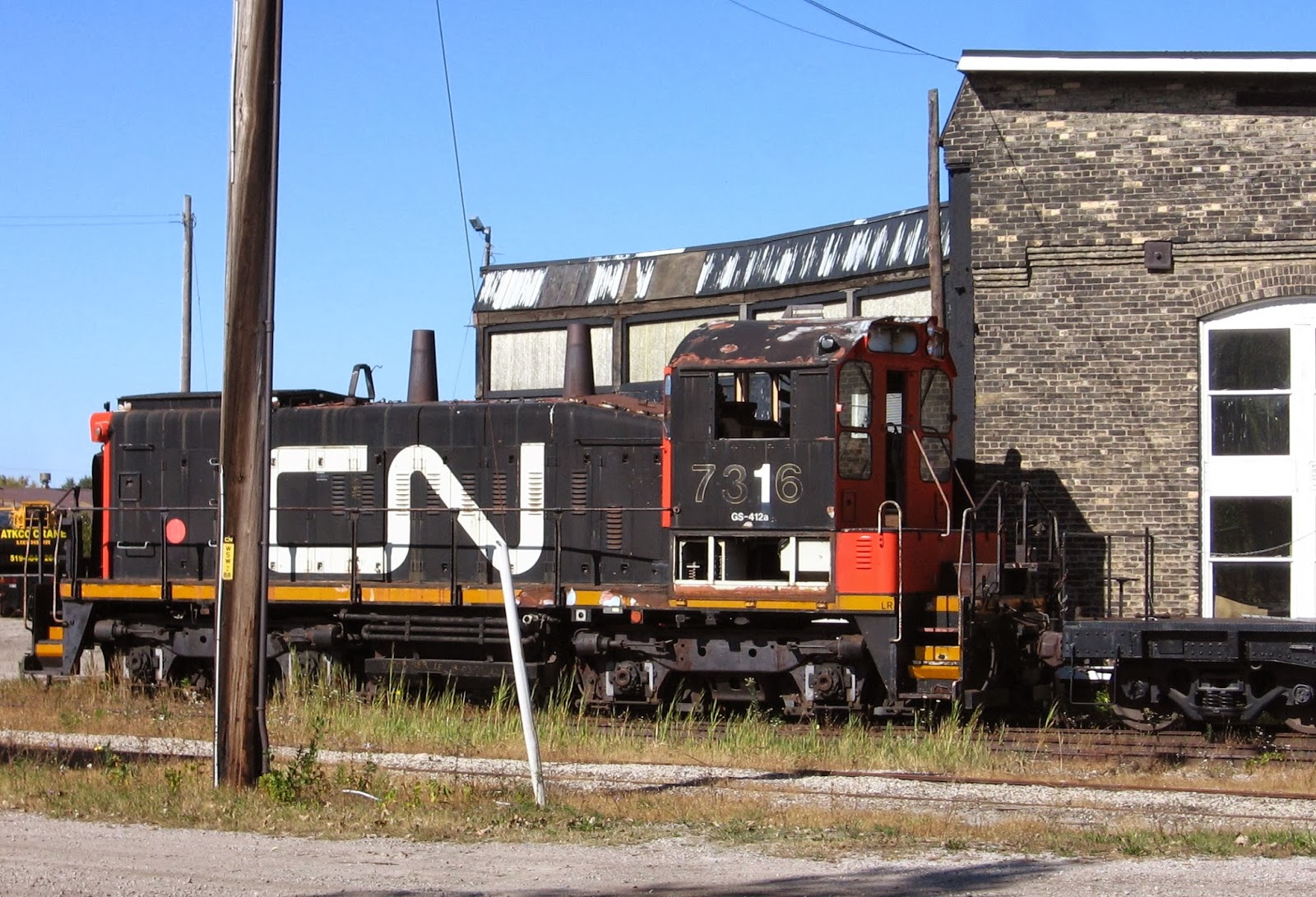 The shot below, taken December 23, 2013, shows a string of diesels in various states, and a flatcar with what I can only assume is a diesel engine under a tarp. Lambton Diesel is often mentioned in Canadian Railway Observations as the destination for a number of locomotives that are either at the end of their lifecycle or a due for a tune-up. That's why it's not uncommon to see a GO Transit, Ontario Southland or a Novacor locomotive lurking around the old roundhouse. 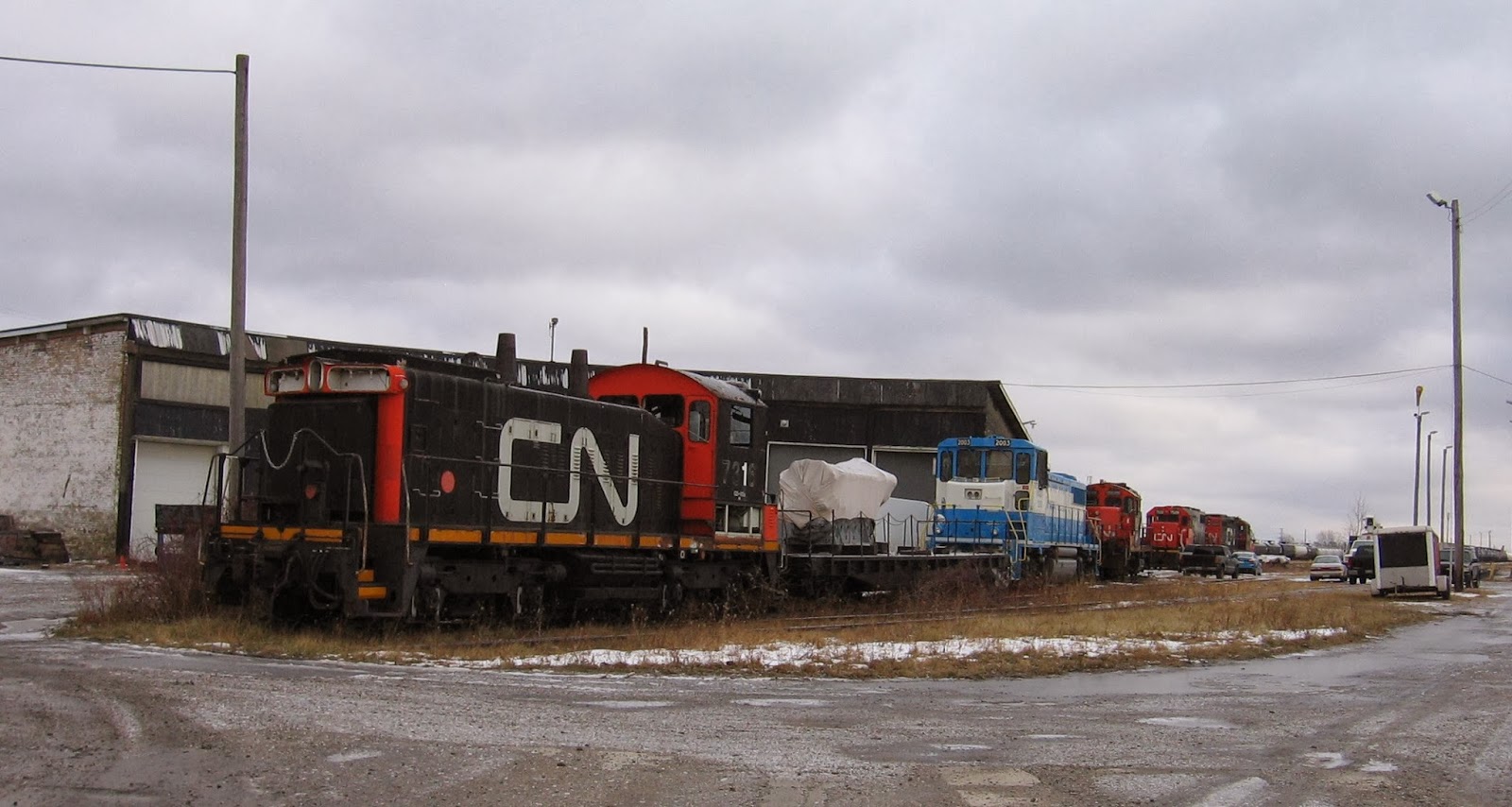 The Novacor unit above and below, MP1500D 2003, has been replaced at the company's Corunna refinery, which has its own switching operations that are linked to CN's St. Clair River Industrial spur. This unit also looks to be in the process of being scrapped or in the midst of a long-term rehab. Just to the left below, you can see an open bay at the old roundhouse, although the rest of the bays have been covered over for some time. 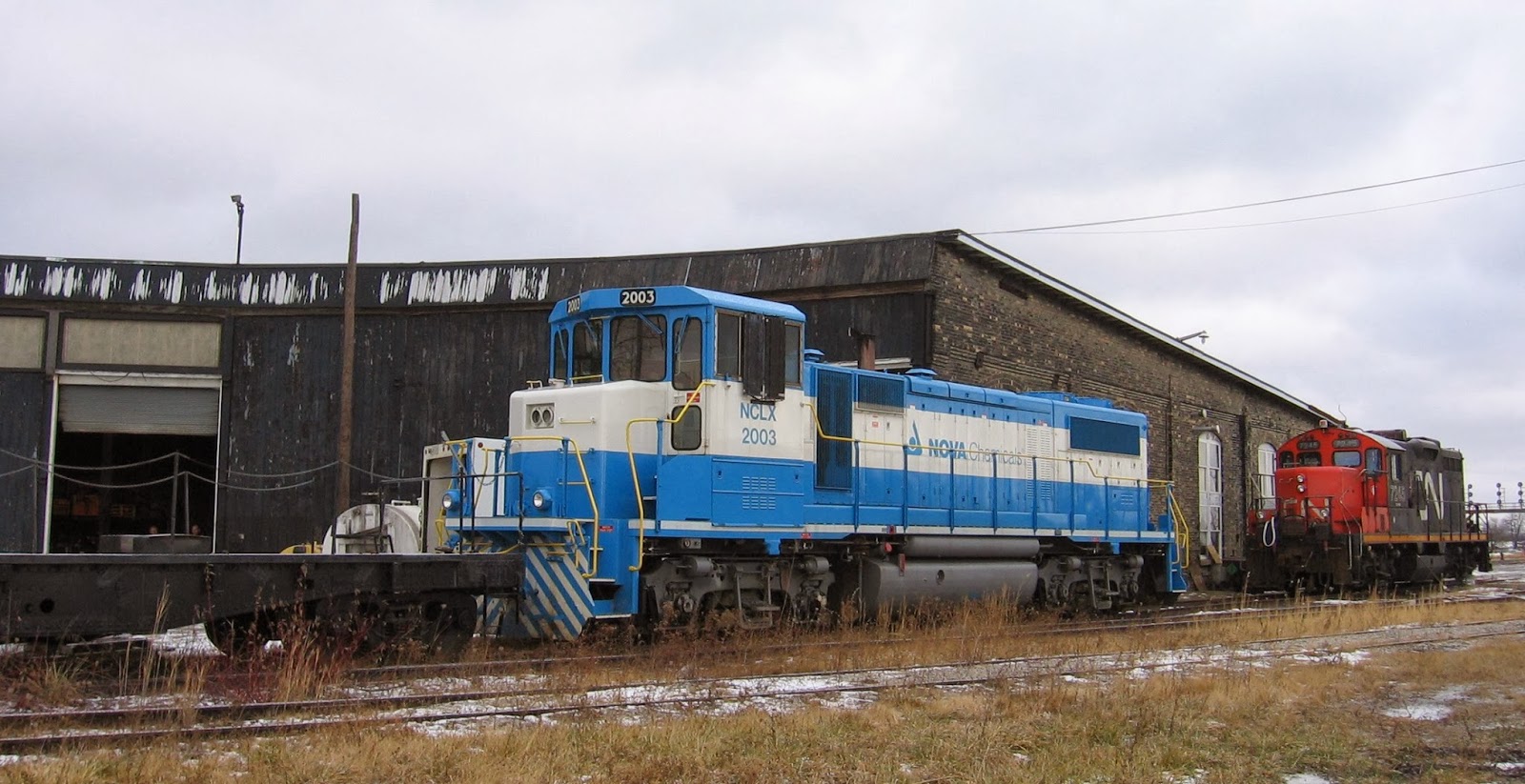 One final shot, taken in October 2013, of a very rough looking SD1200 1251 awaiting either extensive work or a final brick to the head. You can get an idea of the shape of the old roundhouse in this shot. I believe this building was saved by the fact that it is surrounded on all sides by railway tracks and is of very little strategic importance otherwise. In the case of the Windsor and Ottawa West roundhouses, both were victims of the wrecking ball because they were on the periphery of railway operations and were standing in the way of nearby development ambitions.

First, let's consider the Windsor roundhouse. I mention it because I remember seeing this massive shell of a building for years as my family made its way down Howard Avenue to my grandmother's house in Windsor's Remington Park neighbourhood. The roundhouse, which served the Canada Southern Railway (CASO) for many years, was perched on the edge of the city and lingered in disused desolation for years. When an old racetrack across Howard Avenue gave way to a giant mall, the neglected roundhouse was suddenly in danger of being consumed by the retail ambitions of developers. Still, it hung on for years after the mall was built before it finally fell.

Here's a photo of the roundhouse from the 1940s, when CASO was owned by the Michigan Central Railroad, which was itself a subsidiary of the New York Central. The stunningly comprehensive Canada Southern Railway site chronicles the history of this interesting branch of the New York Central, Penn Central and Conrail through the years. I highly recommend visiting this site. Here's a photo of the same roundhouse from the 1960s, before the mall was built. Even then, it looked pretty shabby.

The hulking vestige of Windsor's steam legacy was torn down and replaced with a similar looking roundhouse-shaped retail centre, which was named the Roundhouse Centre in honour of its past. By the time is was torn down, the roundhouse had been disused for decades and its rail connection had been severed from the nearby CN line. Another roundhouse, located at the CP rail yard on Crawford Street, was also torn down. 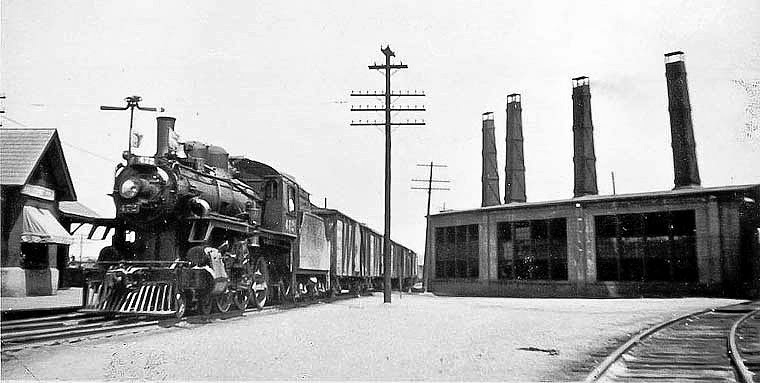 Since much of the old Ottawa West rail yard's imprint can still be seen in this largely vacant area of the capital, I find it strange that the National Capital Commission was in such a rush to bulldoze everything in the vicinity, including old Ottawa West station and the roundhouse. 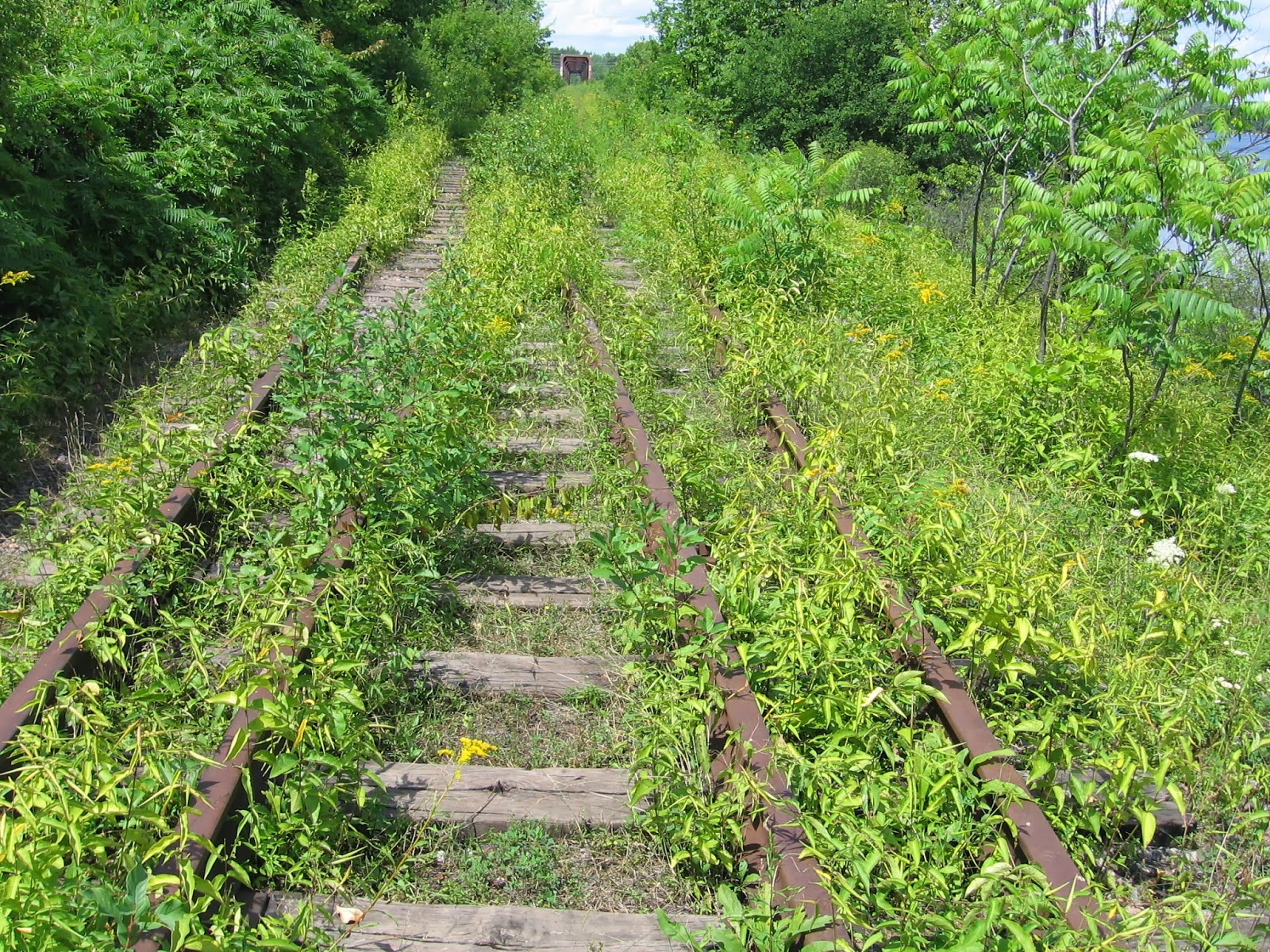 The NCC replaced it with, well, nothing. As you can see from my post last year, the area has remained in development limbo for decades. But take a look at the area in its glory in this fascinating blog and imagine what could have been done with some of these structures, had there only been some vision.
Posted by Michael at Wednesday, February 12, 2014