I heard the ghosts calling me. After visiting the old fortress of Louisbourg, I saw something in a tourism brochure promoting the Sydney & Louisburg rail museum. I knew I had to check it out. In the middle of a windswept, drizzly grey September afternoon, I wandered into the 1895 railway station, which was silent except for the smiling museum volunteer, who welcomed me before letting me wander the place.

The station, still stately looking despite years of being maintained on a limited budget, had obviously seen busier times. At one point, Louisburg, as the railway called it, was a key terminus on a railway that connected the tiny coastal town on the Atlantic to the bustling coal hub of Sydney. I could imagine the town's inhabitants waiting on the old platform, waiting to board the old 1881 passenger coach, ready for their big day in the city. Or little boys watching as locomotives trundled away with dozens of coal cars in tow, ready to do battle with the challenging contours of Cape Breton. 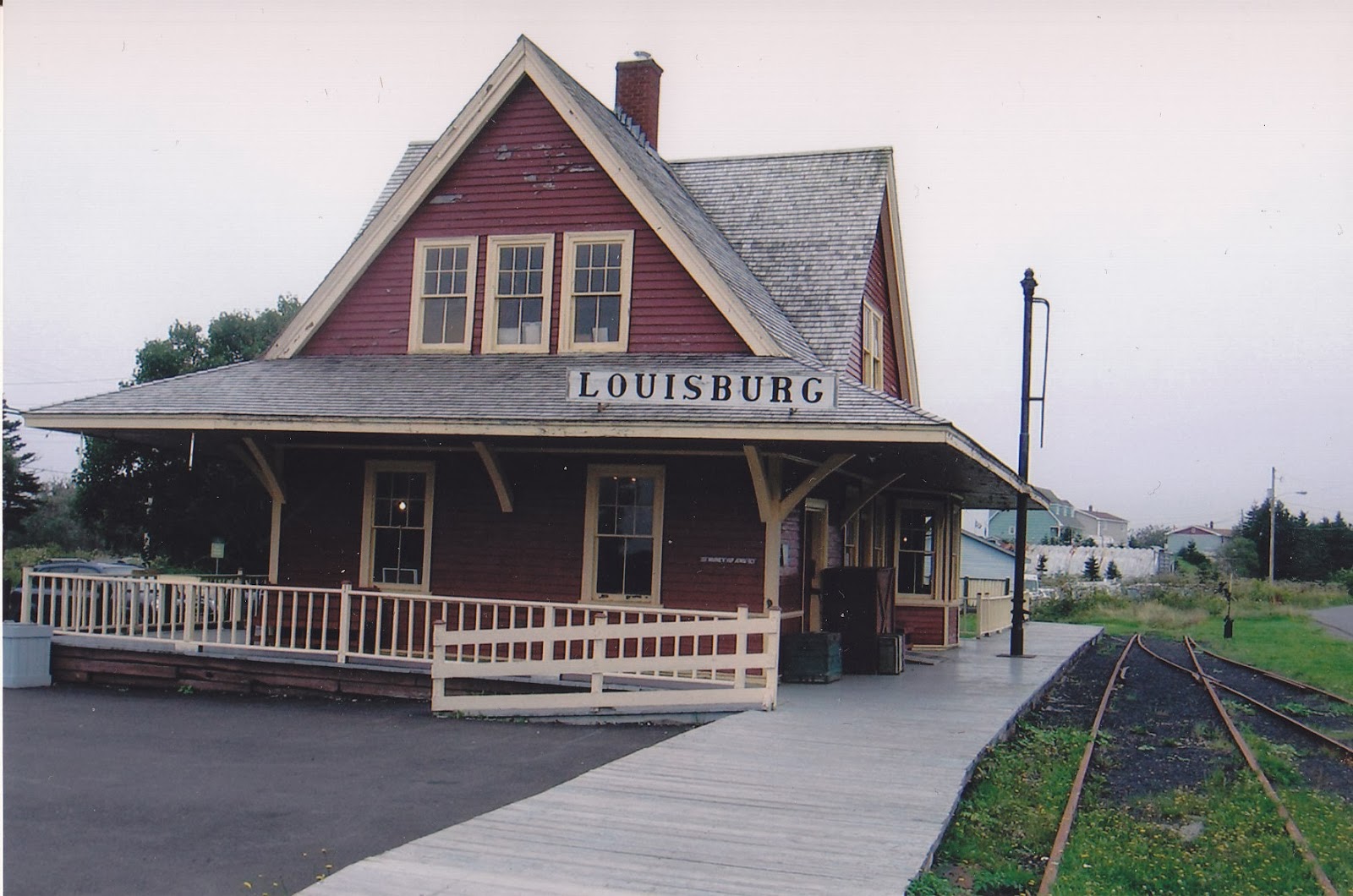 Okay, I'm romanticizing a little bit, but I couldn't help but feel the loneliness of this old station, one of a countless number across this country that were once part of the lifeblood of their communities, now relegated to visitor information centres or quant museums. Highways and a centralized railway network have ensured that many small towns like Louisbourg are no longer railway towns.

The above picture, taken in 2008, was the only picture that survived a horrific computer crash that eliminated a number of photos I took of the old 1881 coach and an adjoining freight car. But this photos still speaks volumes. The rails from the old S&L railway remain, from their days as part of the Devco Railway, which operated on the tracks until 2001, when all of Cape Breton's coal mines had closed, leaving the railway in the hands of several operators who weren't able to keep it as a going concern. You can see the remnants of the old semaphore signal on the platform and the effects of salty air on the rusted rails.

I liked the photo but didn't think much about it until I stumbled across an old Devco Railway caboose in CN's Walkley Yard in Ottawa last summer. The caboose, although heavily defaced by graffiti, still bears its green and gold Devco colours, although CN had hastily painted over the Devco lettering at some point (it's a good bet that the caboose was actually repainted by the Ottawa Central Railway before it was reacquired by CN).

When I looked at this photo the other day, it made me think of the Louisbourg photo and of busier times in Cape Breton Island, when the economy was not solely dependent on tourists like me. There was something about being in that old Louisburg railway station on that grey September day that left a strong impression on me. 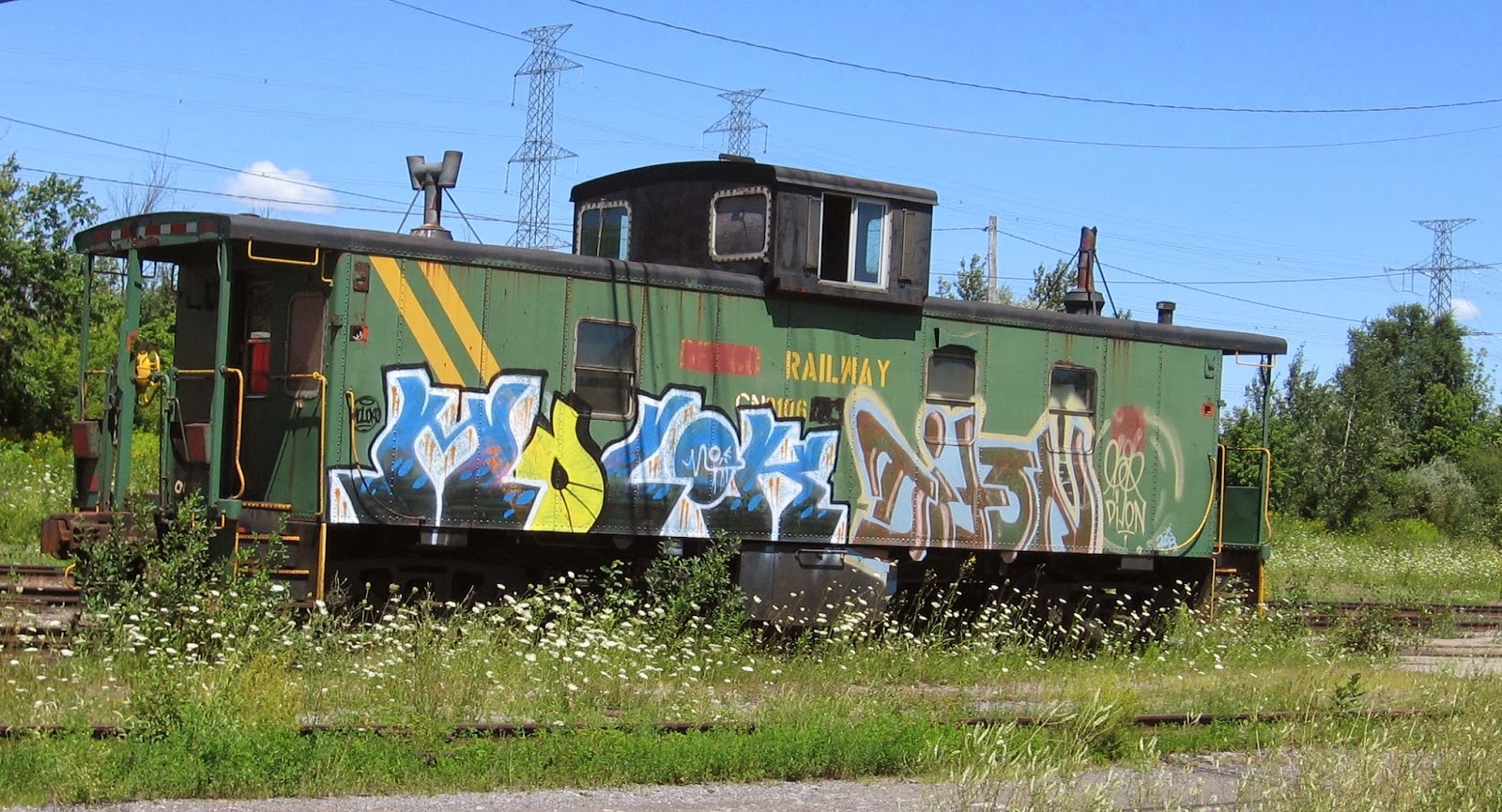 I had the same feeling on Dec. 22 last year when I took a quick photo of the Via Rail station in Wyoming, Ont., just east of Sarnia. This is one of two such kiosk stations in Lambton County (the other being in Watford, just east of Wyoming). This whistle stop station sees very little activity, since Via's service to Sarnia has been trimmed to one train in and out of the city a day.

But there are hints of busier times in this photo as well. You can make out an old right-of-way behind the station, with an old ramp for loading freight cars just behind the station. This stretch of the Strathroy Subdivision was once double tracked, but the second track was taken out years ago and replaced by a number of passing sidings. 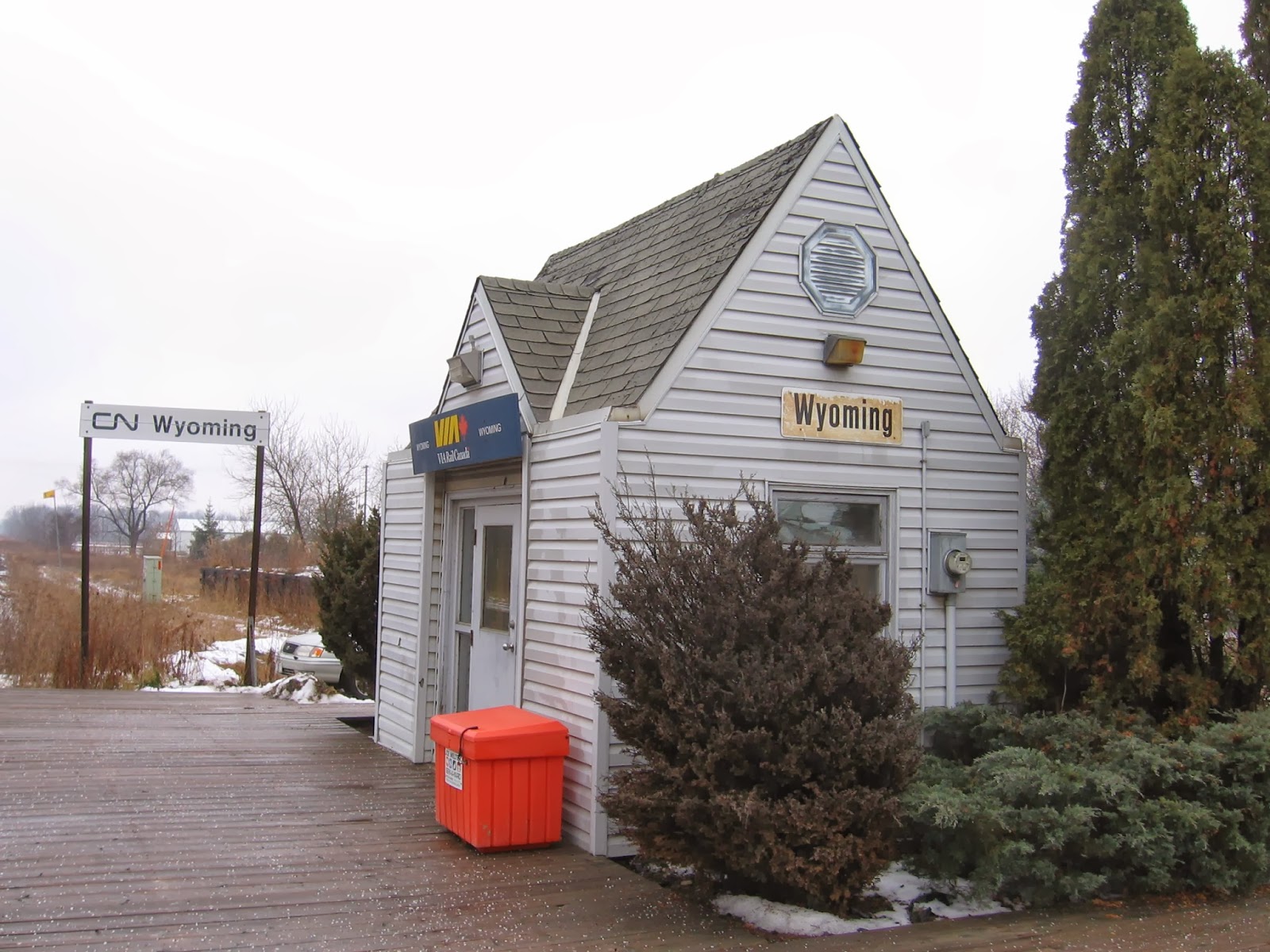 Just down from the Wyoming station, the Wanstead Farmer's Co-op, complete with grain elevators, stands trackside, although its rail service has been discontinued, with the loss of the trackage. At one point, this was a busy point on the Strathroy Sub, as farmers used the railway to ship their products, which include soybeans, wheat and corn. Now, the co-op uses trucks while CN double stack trains breeze through the town. 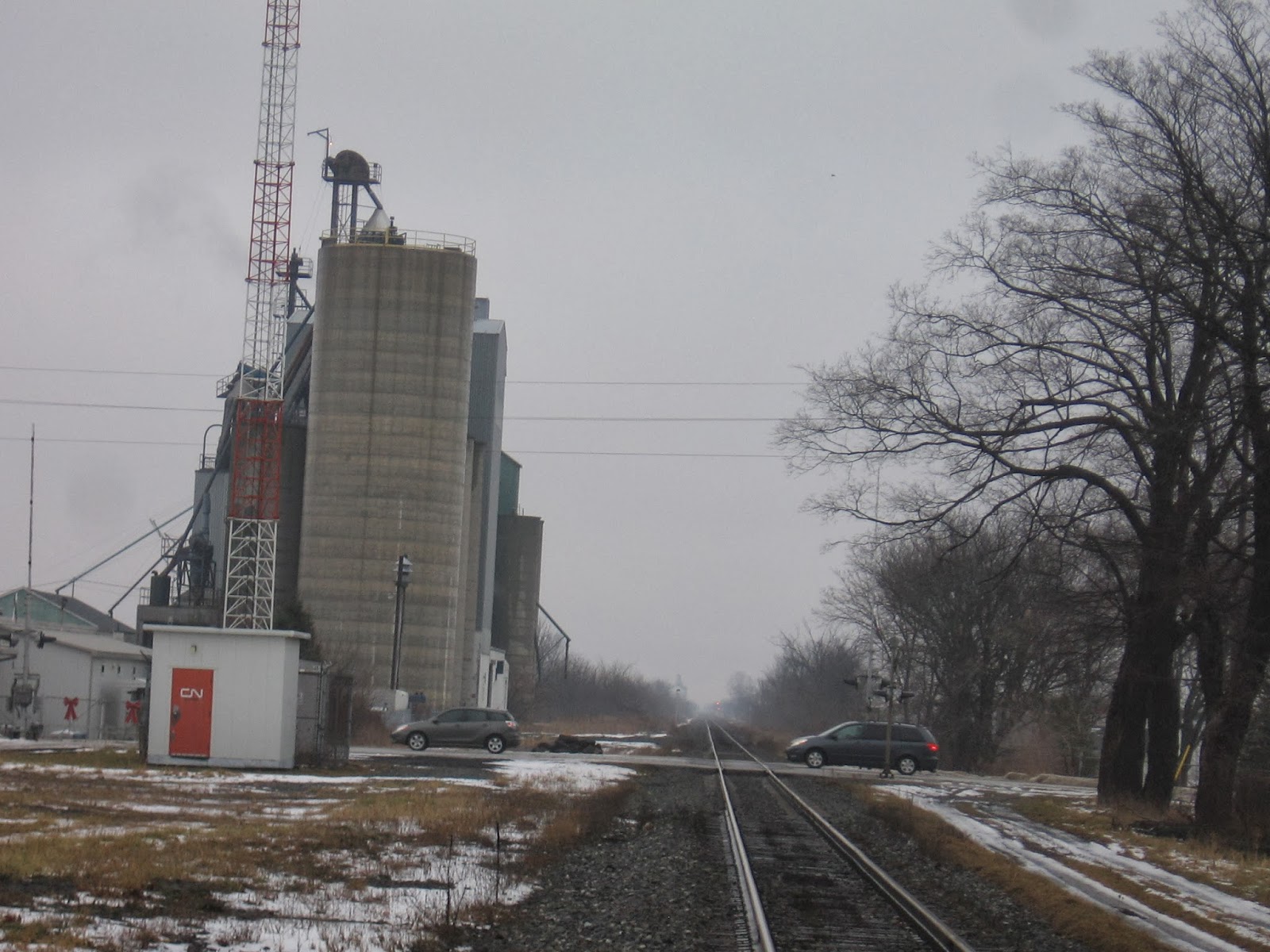 Now compare this with an older view of Wyoming's railway activities below. This undated shot was taken around the early 1920s or earlier, I'm guessing, judging by the vintage of the steam locomotive departing from the two-storey Wyoming station. Also, you can see that someone at some point printed "GTR" on the photo, which would make it a pre-1923 shot, when the Grand Trunk officially became part of the CNR. 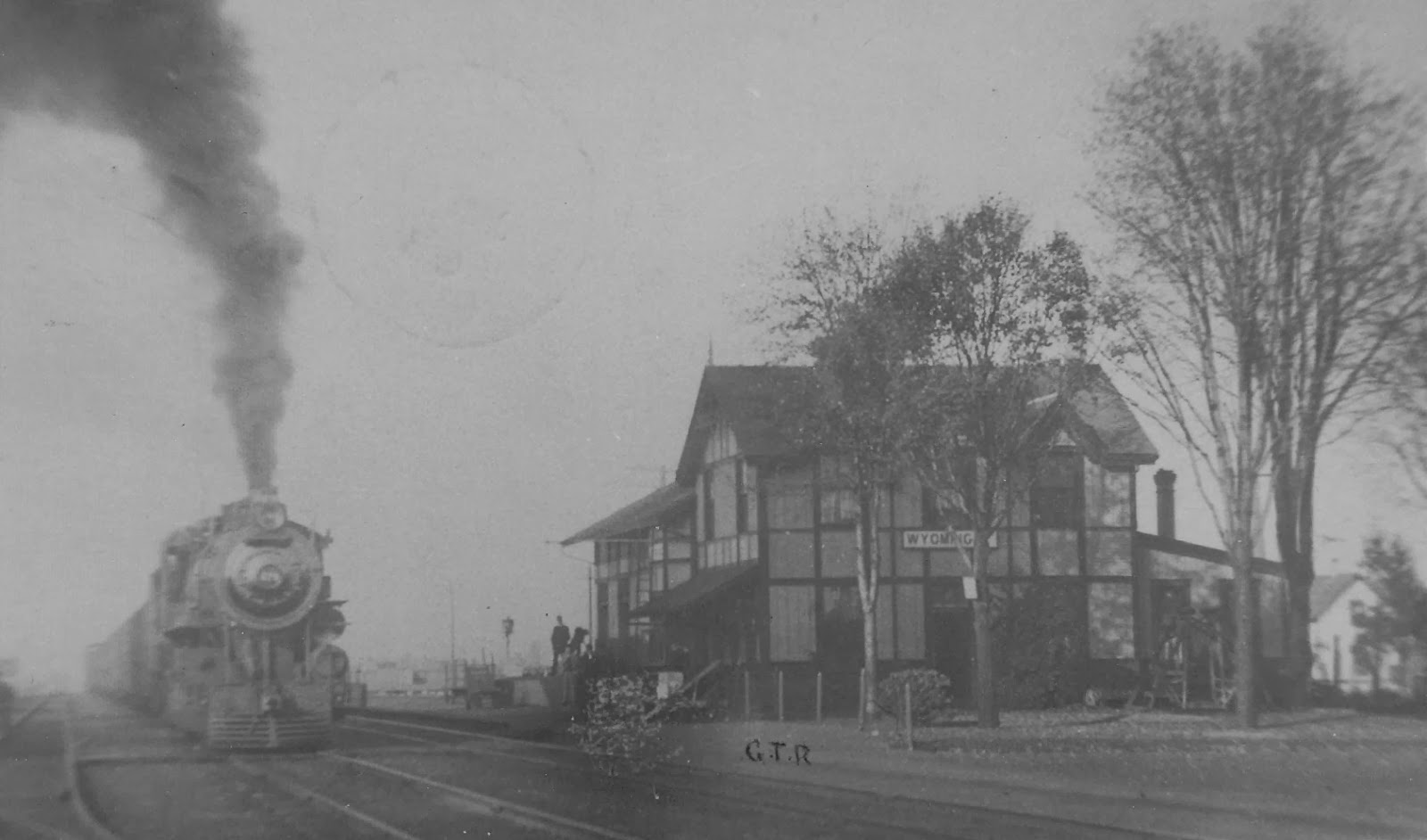 I like observing trackside ghosts. These two are among my favourites.

Earlier in the century, so much of the world began where the station platform ended. I'm about to digress...in Hal Ketchum's (country) song 'Small Town Saturday Night', the lyrics hint at why:
Bobby told Lucy, "The world ain't round
Drops off sharp at the edge of town
Lucy, you know the world must be flat
'Cos when people leave town, they never come back"

Now with roads and highways, we know what lies beyond.

Speaking of ghosts, if you'd like to take a trip back to an earlier time, including some find shots of CN from across Canada, check out: