﻿
I only visited Canadian Pacific's Windsor rail yard twice, but neither time disappointed. As readers know from past posts, my grandfather worked for CP for forty years, many of them in this yard. He first took me to this yard when I was very little (possible three years old) and took me aboard a locomotive to show me how it worked. The second time he took me, I was a teenager. It was the summer of 1991, on a very hot dry day. The visit did not disappoint.
I wasn't there more than a few minutes when yard switcher 1621 whizzed by with a CP multimark-equipped cylindrical hopper trailing behind (see below). You can see an autorack and an old CP Rail caboose on the track behind. This was right around the time when the multimark was fast becoming a memory on CP's locomotives and rolling stock. This GP9 looks like it is due for new paint soon. 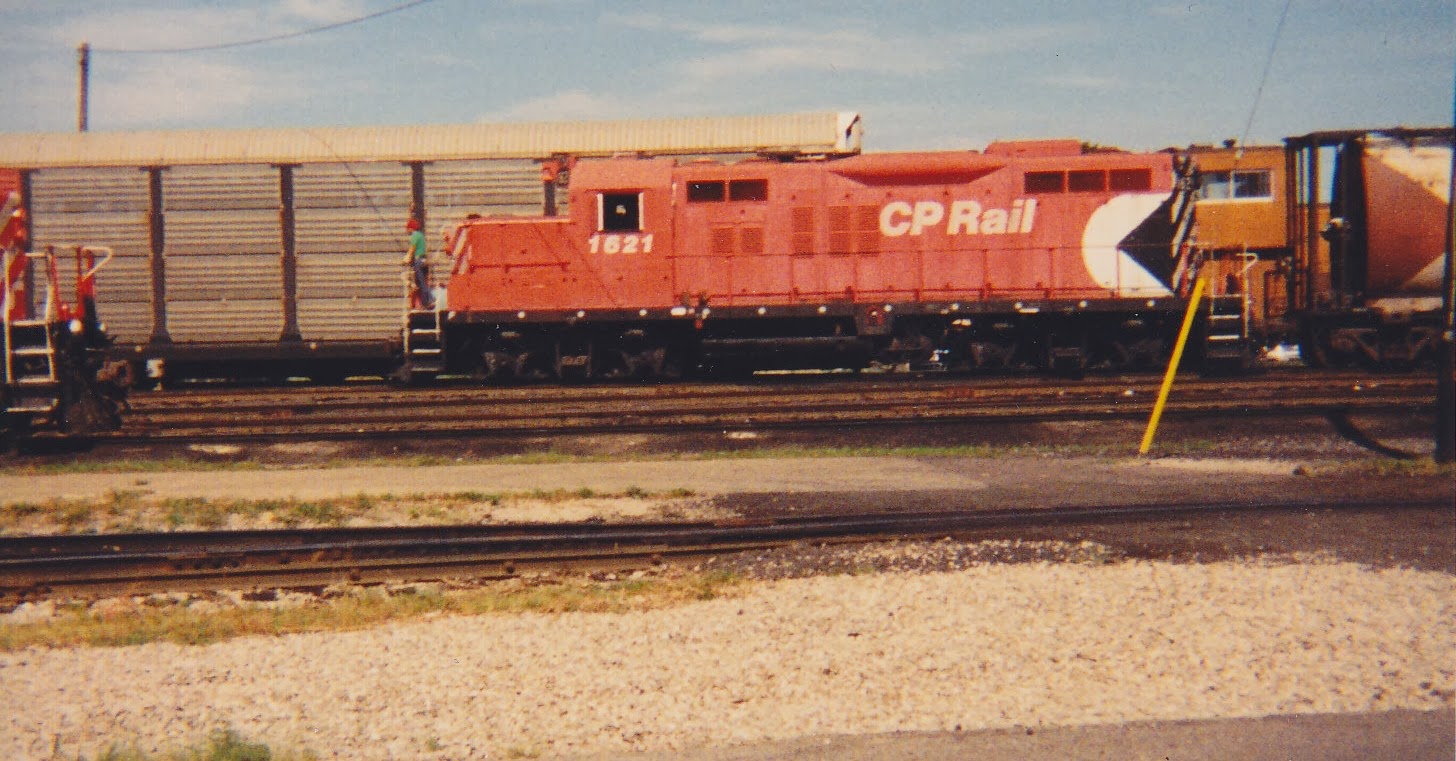 In many ways, CP's Windsor yard is very much like CN's Sarnia yard. Both yards feed international tunnels and both have a wide variety of rolling stock making its way across the border. In the case of the Windsor CP yard, there were fewer tank cars than in Sarnia, but there were some oddities like a centre beam lumber car (left, below). These were a rare site for me (although they are more common in Ottawa). You can also see the difference between two GP9s below. 1619 looks like it is next in line for new paint sans multimark while 8226 is fresh with new paint. 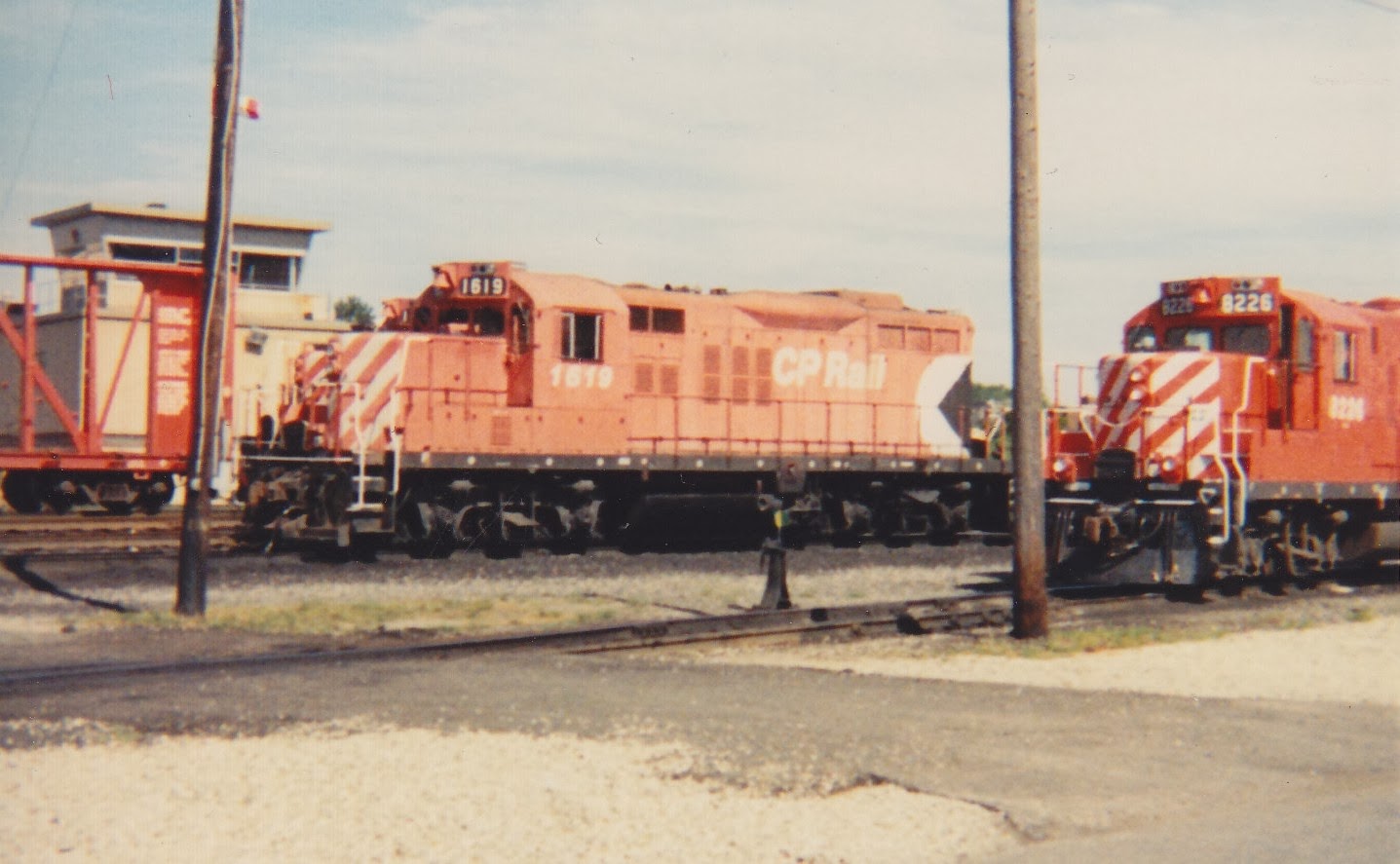 Here's a better look at 8826, without the multimark, but with a much fresher coat of CP's famous red paint. You get the idea of what a dozen or so years of harsh summer sun does to a locomotive's paint job (left). 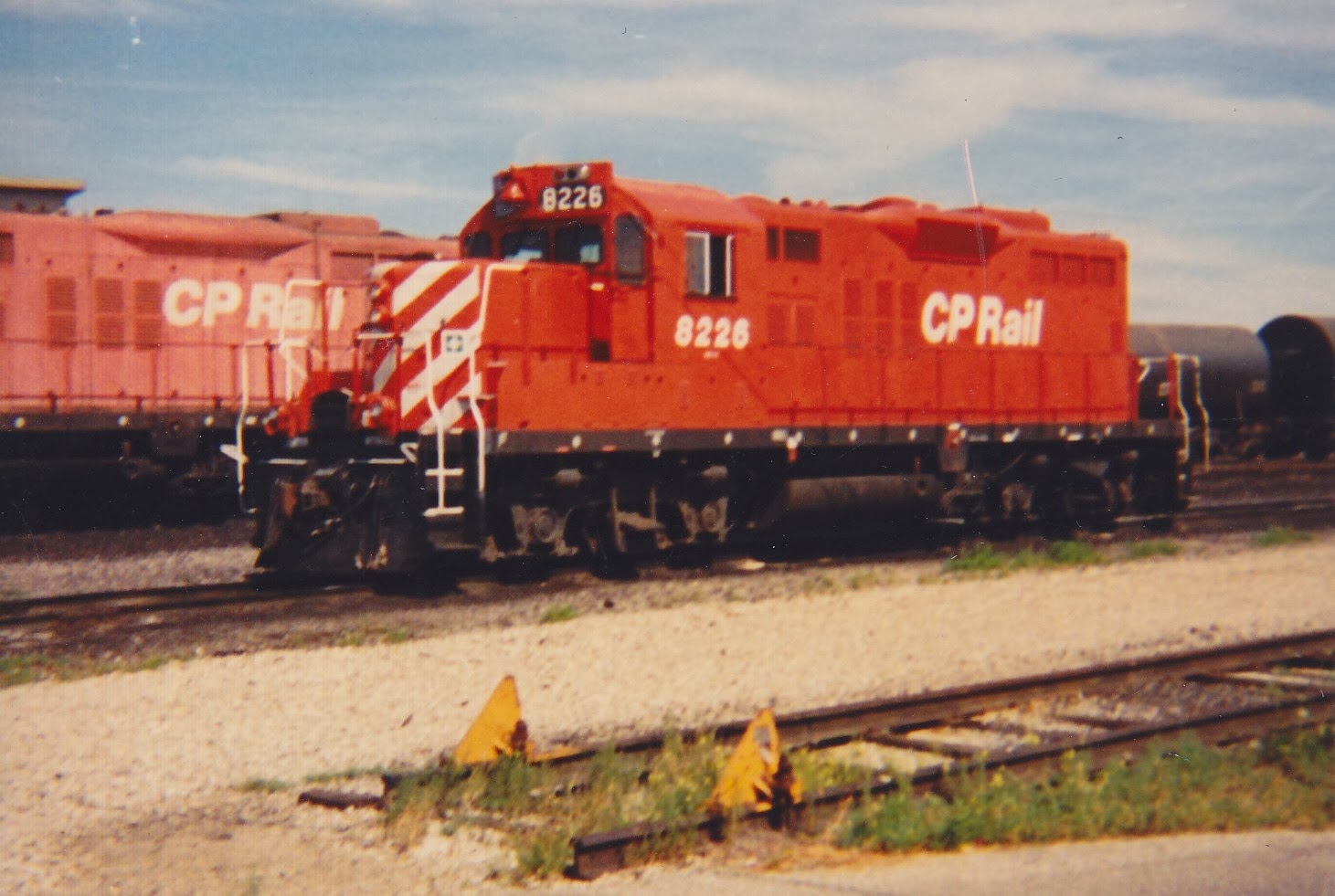 I've included this photo before in Favourite Train Photos #1. This old Alco relic was just coming off the turntable after receiving service in the roundhouse. As this was happening, my grandfather was talking to his old co-workers, many of whom were quite happy to see him again. One mentioned that they really needed someone with his expertise around the yard again. Other than the fact that this is my only roundtable shot in my collection, I like this image because you can see a rare open-air autorack in the background. These autoracks were nonexistent in CN's Sarnia yard at the time. You can also see Detroit's Renaissance Center in the background, which gives you an idea how close this yard is to the Michigan border. 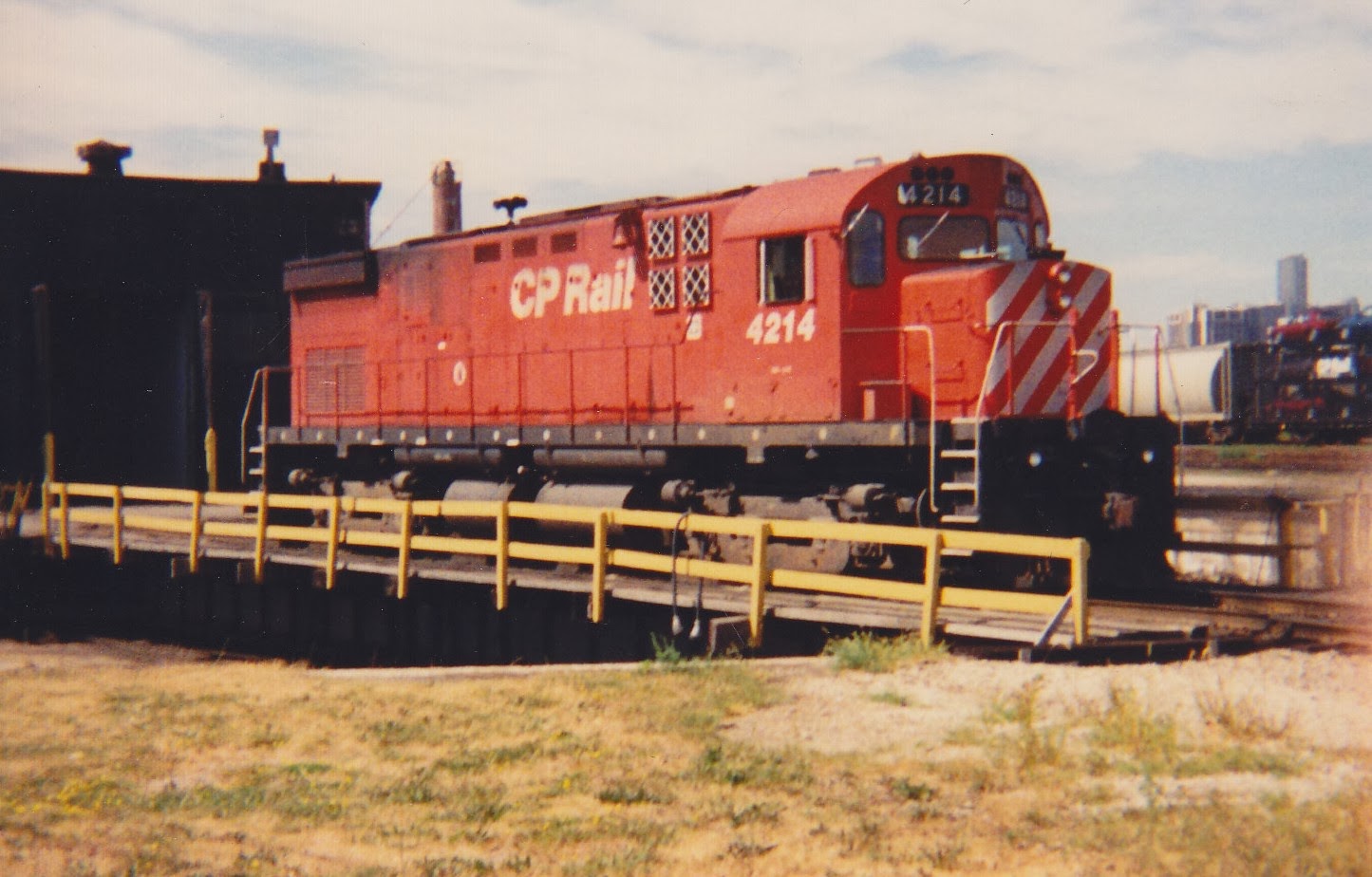 In 1991, CP's Michigan Central rail tunnel to Detroit had not been expanded to handle larger rail cars, although a few years later, it was expanded to accommodate autoracks. This tunnel still failed to accommodate double stack container trains, which left CP with a massive competitive disadvantage compared to CN's St. Clair Tunnel in Sarnia, which was completed in 1994. This disadvantage has yet to be resolved, although there are hopes that a new rail tunnel will be built to give Windsor and Detroit a fully functional rail tunnel that is able to handle modern rail operations.

For the purposes of a rail fan, having a yard crowded with cars that were queued for the rail ferry was a good thing. There was no shortage of traffic when I visited, including this train, headed by SD40 5744. 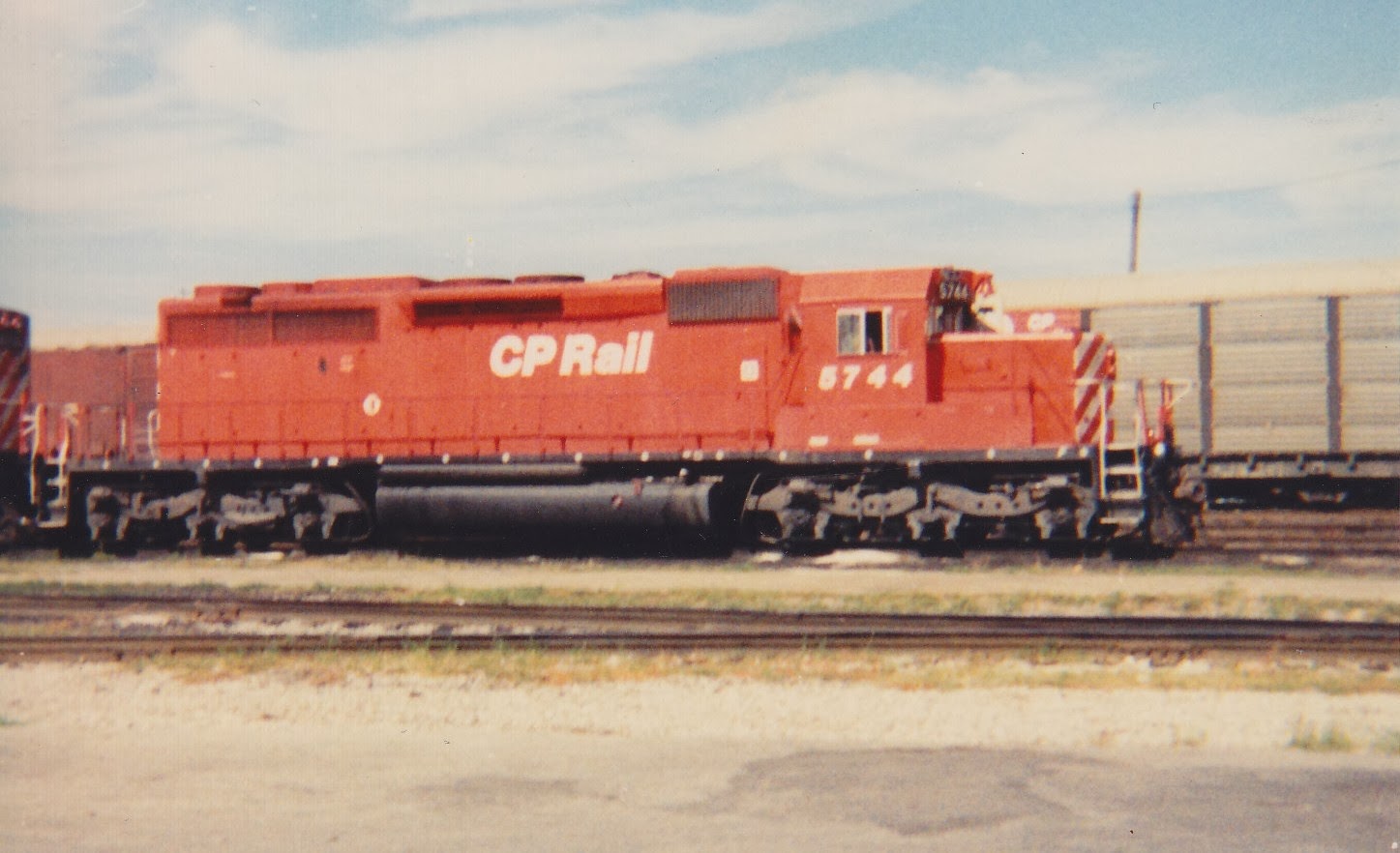 Here's another shot you've seen in an earlier post, Relics on the rails. I included it because I wanted to feature the entire set of photos from that day. I had more at one point, but I have lost those prints. You can see the Renaissance Center, a boxcar and a CP Rail flatcar behind this St. Lawrence Railroad boxcar, sitting just outside the roundhouse. Also, check out those axles! I was very lucky to have such access to these areas of the yard that would have otherwise been out of bounds for me. 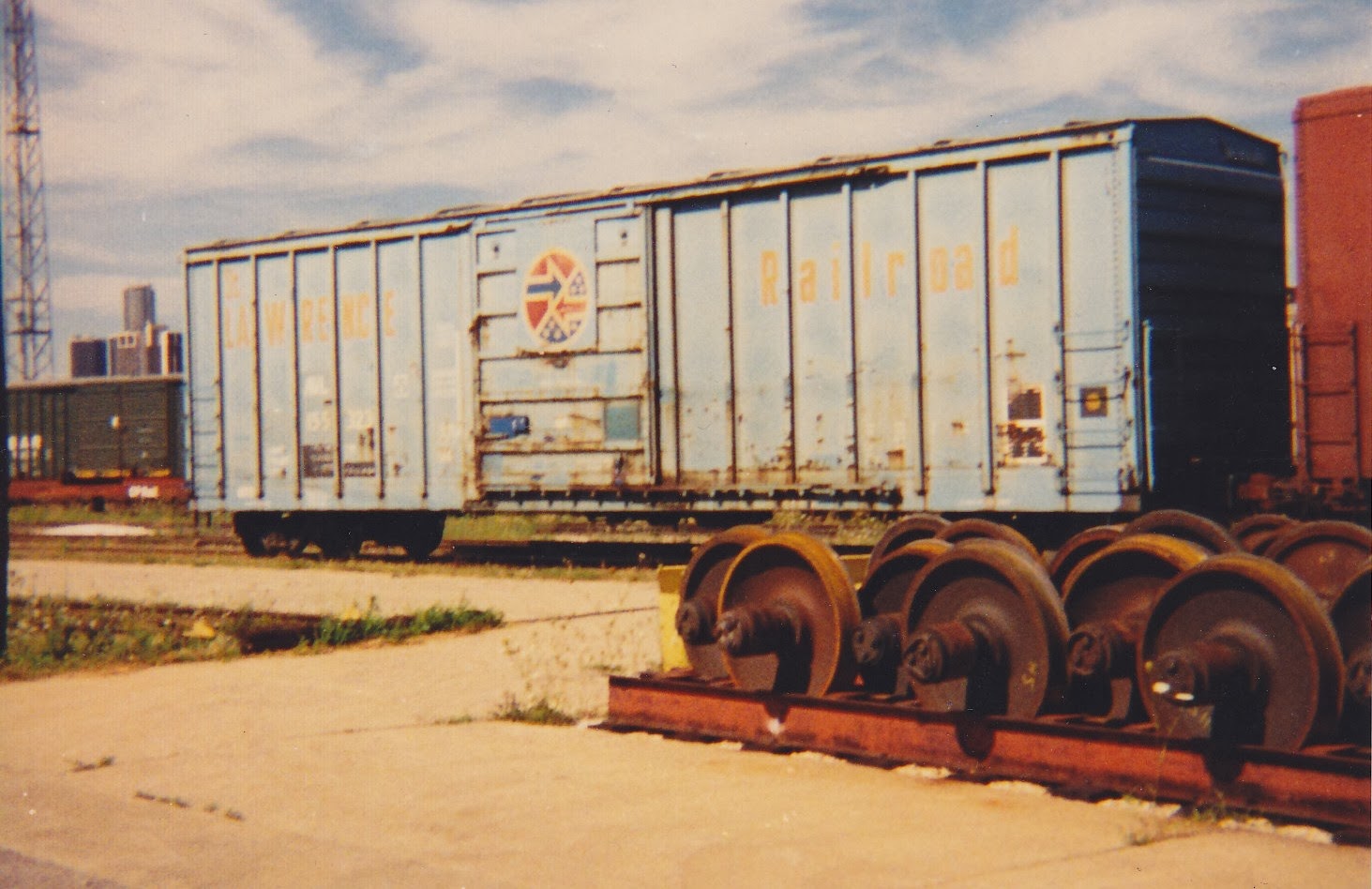 I don't have many shots of CP Rail trains in my collection, which is what made that trip to the Windsor yard such a treat for me in 1991. It's a great memory I have of my grandfather, one which continues to fuel my fascination with railways.
Posted by Michael at Friday, February 28, 2014
Email ThisBlogThis!Share to TwitterShare to FacebookShare to Pinterest
Labels: autoracks, cabooses, CP, CP Rail, GP9, Michigan Central Tunnel, multimark, SD40-2, Windsor

Cool post on a pivotal era in Canadian railroading, Michael.

That 4214 is well-travelled. I caught it in Portage la Prairie (yes, MLW's did go west of Winnipeg)10 years earlier:
http://3.bp.blogspot.com/-hGDBqRcWoz0/Tg0LR7cU4-I/AAAAAAAAD1s/-cEtY66USSU/s1600/blogcprprinciple1.jpg

and in Sudbury in 1985:
http://1.bp.blogspot.com/_kawpWTOGqPk/SLODkLD3nRI/AAAAAAAAADY/bLBRcbvCyZQ/s1600-h/blogCR7765.jpg

5744 is one of three Athearn SD40-2's I painted in CP Rail colours for my brother's layout - it's one of the units that frequently led his trains north of Lake Superior during his time as a CP trainman.

There we go, family and trains intersecting again!

Thanks Eric. I have a soft spot for this era of Canadian Pacific. I am in the midst of modelling a late seventies era CP N-scale model train set, in Southwestern Ontario. Thanks for filling in some info on the units I saw day. I have received quite a few comments on 4214. It seems to be a favourite.