The Tangled History and New Life of Car 23

I was surprised when I visited the Railway Museum of Eastern Ontario in Smiths Falls last summer to see that the organization has a big new project in the works. An old Canadian Pacific Railway observation car, which is simply called Car 23, is slated for full restoration. The museum says it has many of the car's original parts, carpets and furniture in storage. The car is now located in a corner of the property, behind the museum's CN snowplow. 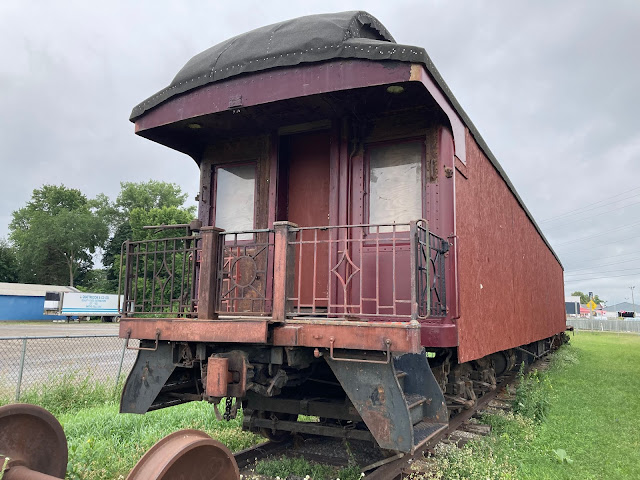 You can see from this photo that much works needs to be done, as the sides of the car are currently being protected by plywood sheeting, although I give the volunteers credit for painting the sheeting to match the car's maroon scheme.

I had no idea that the museum had this old railcar on its premises. I have visited this museum several times over the years and didn't even know it had a single piece of Canadian Pacific passenger equipment. Those who have been here know that the majority of the museum's passenger equipment is from the Canadian National, mostly from its pre-wet noodle black and white days. Here's a shot below of its passenger roster, as seen from the side of the museum's S3 Alco switcher. The car at the end of the consist is the former Canadian National dental car, which was once used to serve the needs of those in remote towns who did not have a dentist. 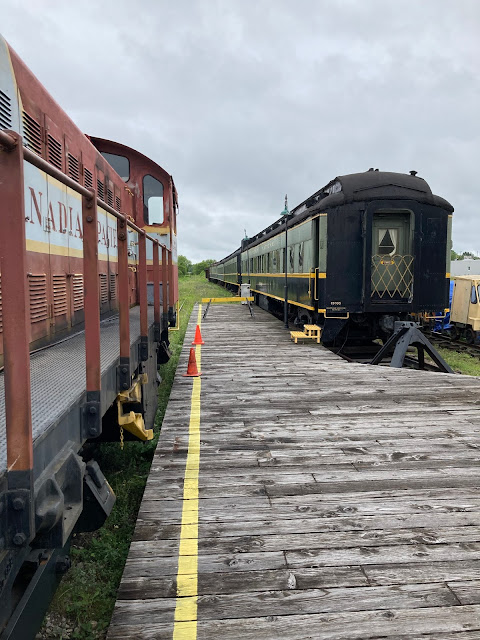 These days, you are not allowed to climb on the equipment or even touch it, which is understandable given the health precautions that are in place due to the pandemic. That meant that we were given a guided tour of the grounds by a tour guide. He was a great guide and very knowledgeable about the overall history of the equipment and the companies that supplied it. When he arrived at Car 23, as he called it, he mentioned that it is the museum's next big project.

He even mentioned that the car was used for Sir John A. Macdonald's purposes. That piece of information made my ears perk up. I knew that Canada's first prime minister was a huge fan of the Canadian Pacific and made use of the railway, but I wondered if he did in fact use this car.

So I tried to find what I could online about Car 23.

First things first. This car was built five years after Sir John passed away, so we can effectively squash that bit of the myth. While Canada's first prime minister was a fierce supporter of the transcontinental railway and rode the rails many times, he never stepped foot in this car.

The car was built by Crossen Car Manufacturing Co.in 1896 as Quebec Central Megantic. The Quebec Central was a railway that was headquartered in Sherbrooke. The railway served the province's Eastern Townships and eventually connected to CP's transcontinental line at Lac Megantic. The railway was leased by CP in 1912 for 99 years, so it eventually fell into CP's operations, although it continued to be operated as a separate entity, with passenger service as far as Quebec City and Vermont.

So, strictly speaking, this car didn't begin life as a Canadian Pacific car. It's important to note that the car's frame and undercarriage were both originally made of wood, which reflects what was common at the time. The car's underframe was rebuilt in 1912, the same year CP leased the Quebec Central. The car's name changed to Beauce in 1935.

It wasn't until 1939 that is acquired the Car 23 moniker. The rear observation porch makes you think that it might have been a car used on the rear of passenger trains, but the car was strictly speaking a business car or superintendent's car. It was retired in 1968 and assumed a second life as a museum piece under the ownership of the Canada Museum of Science & Technology. The car was leased to the Canadian Railroad Historical Association for its Harbourfront Attraction in Toronto until the museum was disbanded and the collection scattered.

The history of the car gets a little murky here. I'm not sure when the Toronto museum was closed and where the car resided in the ensuring years before it came to the Smiths Falls Museum. You can read a bit about the car, and CP's other business cars, on this Old Time Trains page. You will have to scroll down the page a bit to get to the Car 23 information.

As for its provenance, there is a fair amount of information about Crossen Car Manufacturing, which built many cars for the Canadian Pacific, Canadian Northern, Intercolonial Railway and other Canadian lines around the turn of the century and shortly afterward. You can read about that company by checking out this fascinating history page.

So, in all this sleuthing, I wasn't able to find any extensive information on Car 23. The museum's plans for the car will likely involve years of restoration, which means it will likely not look any different than it does in the top photo for some time. I'm not sure how extensive the museum's volunteer base is, when it comes to restoration efforts. I know the Bytown Rail Society has its regular dirty hands club, which has been working on an old CN coach for years, so I would assume that Car 23's timeline would be something similar.

Still, it's a fascinating piece of history. Hopefully, it will have its moment to shine once again.