Something Old, Something New in Smiths Falls

You better believe that when I took my family to the Railway Museum of Eastern Ontario in Smiths Falls in August, a trip to the Canadian Pacific rail yard was on the agenda as well. I told my wife that this would be a stopover before we hit the local Tim Hortons. She seemed fine with this and stayed in the car. My oldest daughter decided to come with me and walk along the old platform in front of the original Canadian Pacific (later Via Rail) passenger station.

As is the case in Smiths Falls these days, timing is everything. This is not a terribly busy rail yard at times. It's such a different place compared to the CN rail yard in Sarnia, which is one of only a few other points of reference for me. However, there is one thing you can almost always count on seeing in the Falls. CP always has two units assigned to the yard and they are usually idling a few tracks out from the main line. And by this, I mean the middle of the yard.

I checked the old searchlight signals and it was clear there was nothing coming on the main line, which was no surprise, so I decided to see if there was any interesting rolling stock in the yard. I did find this tank car, still painted in the Omya scheme. Of course, these cars are quite common in these parts, as CP serves the Omya plant in Perth, delivering what it needs to make its calcium carbonate-derived products (think of toothpaste and many other consumer and building products). 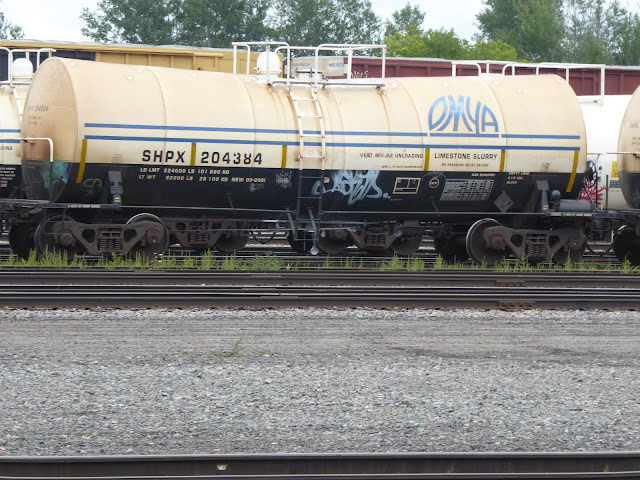 This may not be all that exciting to some, but I was happy to find one of these cars that still had the Omya logo on it. I have a lot of shots of these cars from years past, but almost all of them now have no logo on them. I've mentioned it many times on this blog, but I'll mention it again. What seems mundane today might just be a gem a few years from now.

I also love taking overall shots of this yard, which is one of the few I have seen that was designed on such a pronounced curve on the main line. It allows you to see lines of cars stretching quite far into the distance. Again, for someone who never sees trains these days, any shot is worth taking. 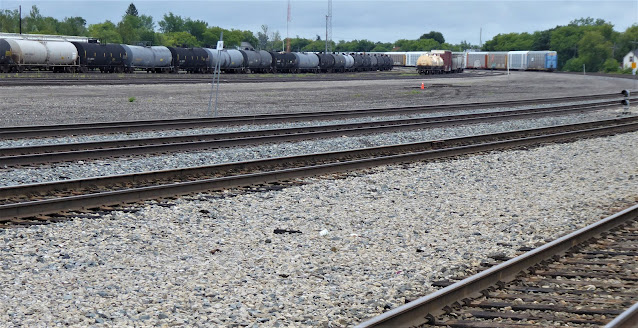 If you study shot carefully, you'll notice three different styles of tank car (grey, black and white), some more of the white tank cars bound for Perth and a long string of autoracks, including one painted for the Grand Trunk at the end.

But all of this is secondary to the idling engines in the yard, which is about all there is to see in Smiths Falls for much of the day. Some mornings, you might get to see crews get a consist together for a run to Perth (I've caught this type of action two times. You can read about it here and here.). This time around, nothing was happening. The two units in the yard were idling and the air brakes were making some serious hissing noises. My daughter found it unsettling.

Here was the shot I took. Here are a few things I found odd about the lash-up. First, I don't know that I've seen units lashed up like this. They are usually connected on the long hood ends. The next thing I noticed was that there were two very different units together. Unit 2304 is obviously a rebuilt GP20ECO unit that are the go-to choice for yards and local runs on the CP, judging by my past experiences in this yard and at a few other CP spots I've visited. But engine 3037 is a GP38-2, obviously in need of some new paint, judging by the look of the red on the long hood. 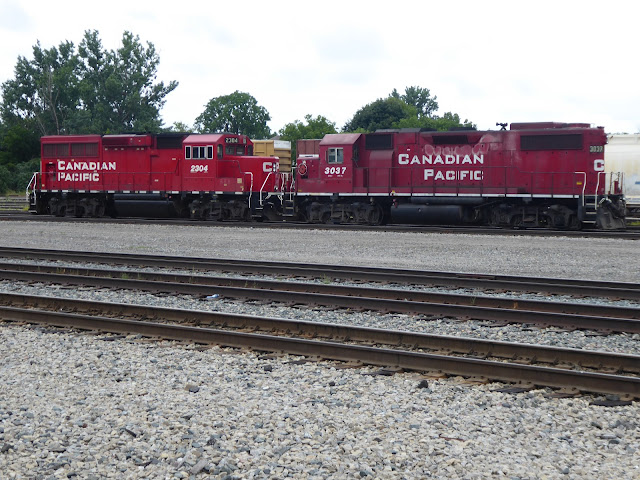 Okay, so it's maybe not as surprising as a regular to this yard would expect, but it was the first time I've seen this type of old and new together in this yard. For someone who so rarely gets to the rail yard these days, anything out of the ordinary is worth mentioning.

Very strange to see them short hood to short hood! It almost seems like there was a third unit somewhere that the crews detached.

I hadn't thought of the possibility of a detached third unit, which would explain that scene a lot. Good thought, Steve!