Some fascinating details at the Railway Museum of Eastern Ontario

Earlier this summer, I brought my girls to the Railway Museum of Eastern Ontario. Much to my surprise, they loved the place and are eagerly awaiting a return trip. I spent a great day with them, looking at some of the old relics in the Smiths Falls collection and explaining some basics of railways to them. We were even treated to a demonstration in railroad telegraphy from a volunteer, who was fluent in Morse code. He also explained to the girls what a railway agent was and what they did in the station.

The last time I went to this museum, I spent much of the time photographing the pieces of rolling stock and the two locomotives. This time around, since I already knew what was on display, I looked for some hidden details I missed the first time around.

I am a history nerd, so I was thrilled with all the artifacts that I didn't notice the first time around.

Here are a few shots of the railroadiana you will encounter at this gem of a museum. What really fascinated me were the signs in the old Canadian Northern station. This one below was by far my favorite. 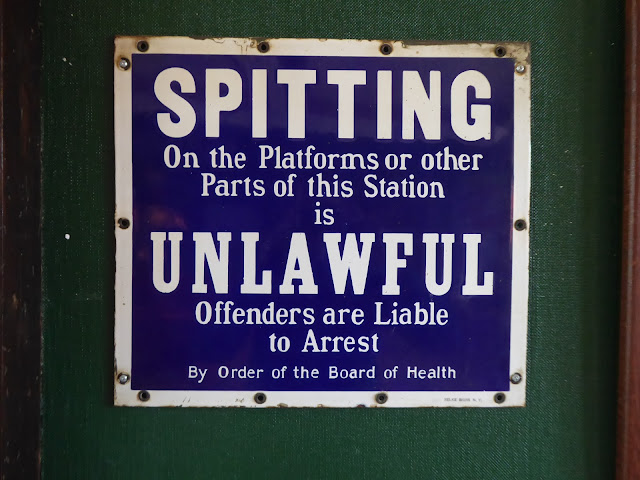 Arrested for spitting! Imagine. I suppose that this rule was likely aimed at those spitting tobacco. I laughed when I saw it because it made me think of an actual bylaw that the old City of Kanata had, before the western suburb was amalgamated into the City of Ottawa. It was a long-running joke in this area that you could not spit in Kanata. The old city had a bylaw that prohibited the habit. I remember playing soccer there and my teammates always joked about not spitting during a game without first taking a good look around.

The second sign that I really loved was this old telegraph sign, perched outside the old telegraph office. Today, we still see parts of the old telegraph system still in place along railway lines, but I would imagine many younger railfans not really understanding just how important these lines were at one point. 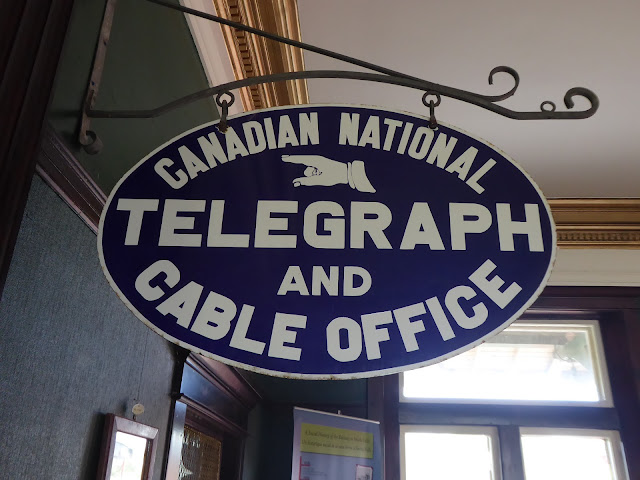 I thought this slate timetable (below) on the outside of the station was a nice touch. Although it was quite out-of-date by the time we visited in July, it gave you a good idea of what train travel was like in the days before the technology that we take for granted today. Surprisingly, the frequency of passenger trains then is comparable to what you see today in Eastern Ontario, although Smiths Falls passengers no longer have their grand old CP passenger station to begin their trips. Instead, Via now uses a modern kiosk on Union Street. I say kiosk, but it is quite a bit larger than a bus shelter. However, whenever I see that ultramodern station, I can't help but think that it looks like an overgrown bus shelter. Functional, for sure, but lacking any style. 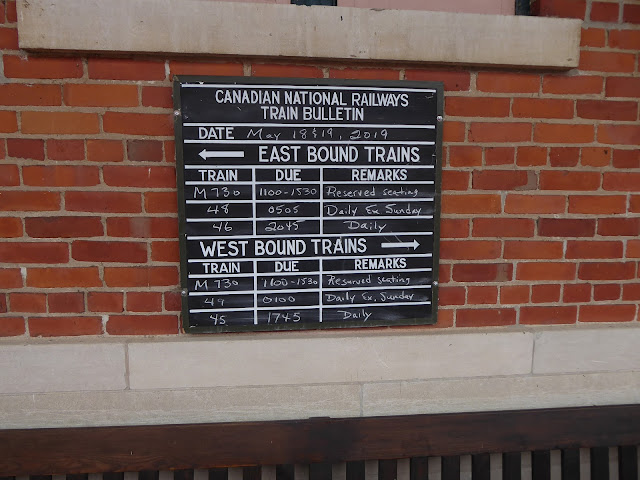 Before I saw this sign, I had no idea this place even existed. Forthton is a hamlet northwest of Brockville. It once had its own railway station on the Brockville, Westport & Northwestern (later Canadian Northern and Canadian National) Railway. The sign looks like it's seen its share of bad weather over the years but it now hangs in the old CNor station waiting room. I love old station signs and wish more of them had been saved. I always thought it would be a cool feature to have in my house (not sure if my wife would agree). 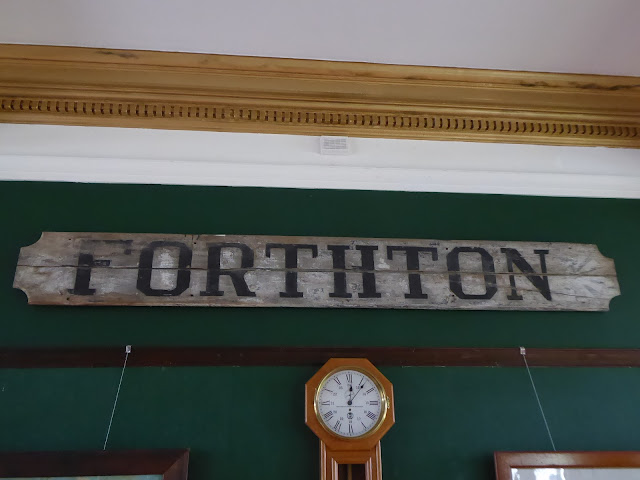 This old flag station for Nolans saw use for many years just north of Smiths Falls. I didn't know that this station was actually originally used as a flag station for Dwyer Hill, on the edge of Ottawa, before it was moved to Nolans to replace the original Nolans flag station after it burned down. This little station served CNor passengers between Smiths Falls and Ottawa in the early 1900s. The museum notes that in its final years, only two trains passed this station at 9:45 p.m and 2:15 a.m. Not terribly convenient! 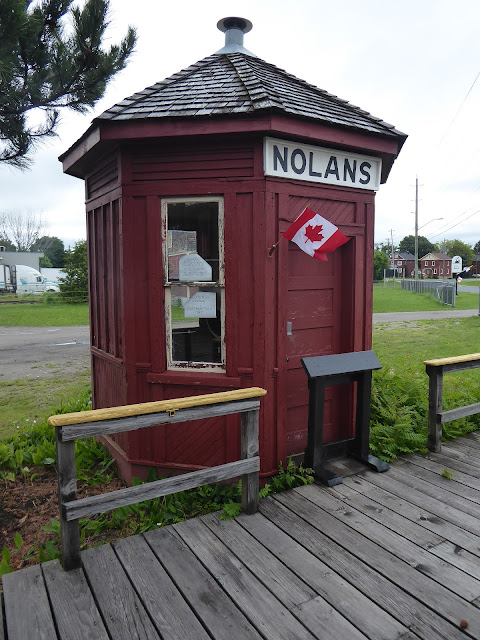 I didn't get a shot of this caboose the last time I was at this museum, as it was parked in the museum's yard in a spot that was not accessible to visitors. As you can see, it is used for storage now and requires a fair bit of work to be fully restored, particularly on each end. I like the fact that they note that the caboose was originally CP 436757. You can also see another old CP caboose hitched to the other side. This caboose also seems to be suffering from the elements. It was in a prominent position the last time I was at this museum, but has been boarded up and shuffled off to a much less prominent spot. The yellow caboose is an older wooden van that had its slatted sides covered over with plywood sheets. It was a practical thing for railways to do at the time, but has since proven to be a headache for those who seek to restore the cars for preservation purposes. 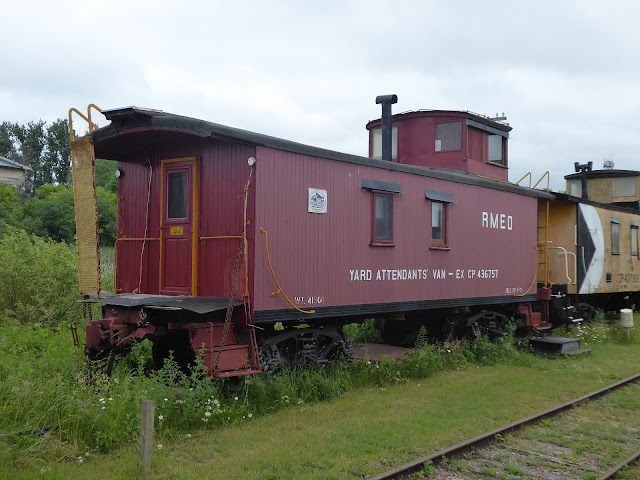 My daughters couldn't get enough of riding in the cupolas, so I decided to follow them up one time and get this cupola's view of the station and the trailing CN caboose. This museum really does allow you to get a feel for what it was like to ride a train back in the golden era of railroading. As a parent, it means you have to watch your little ones closely, but I like that the museum trusts its visitors enough to hop aboard these fascinating relics. 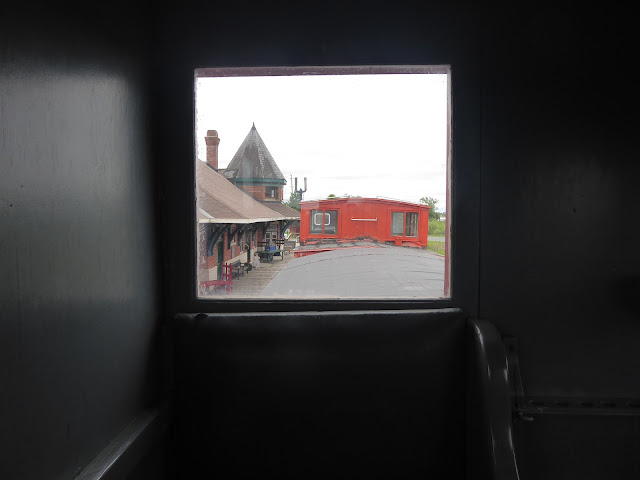 Here's another shot I took from the end of the caboose lash-up in front of the station. You can see the old passenger equipment to the right, including the CN dental car, which is the best preserved piece of passenger equipment at the museum. The interiors of the other passenger cars are not open to visitors. 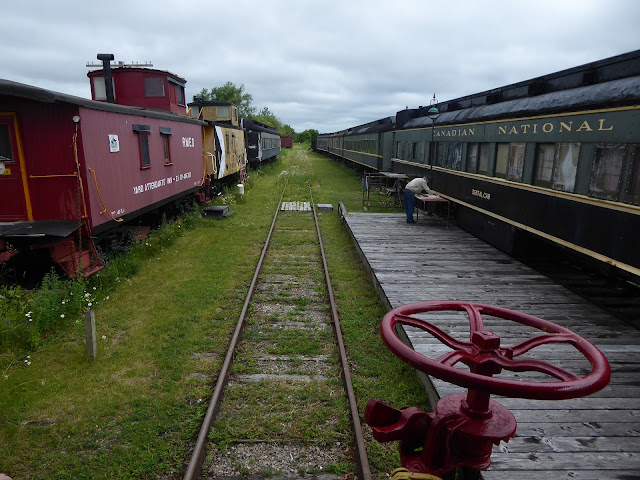 This is an old section house built by the Canadian Northern, that now houses some of the museum's archives. It is not open to visitors, but it is in the process of being restored after being saved from demolition in 1995. These structures were used as homes for the families of railway section hands. The museum says this is one of the last remaining such structures in all of Canada. The house was built in 1912. 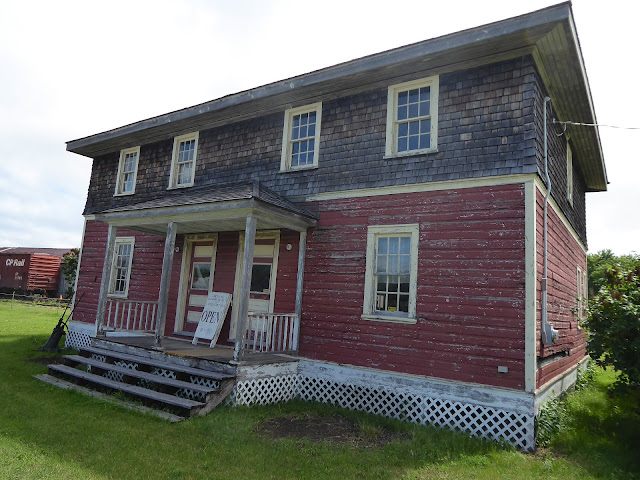 I didn't get a shot of this boxcar the last time I was at the museum. I took a quick photo because it reminded me of railfanning when I was a kid. The CP multimark was a common site for me and it remains a source of great nostalgia. Plus, I have two examples of this boxcar on my layout in my basement (although both are in boxes at the moment). I couldn't publish a post about the museum without getting a shot of my favourite piece in the collection, its old Alco switcher. This engine still operates on occasion, when the museum offers visitors train rides on its operations days. 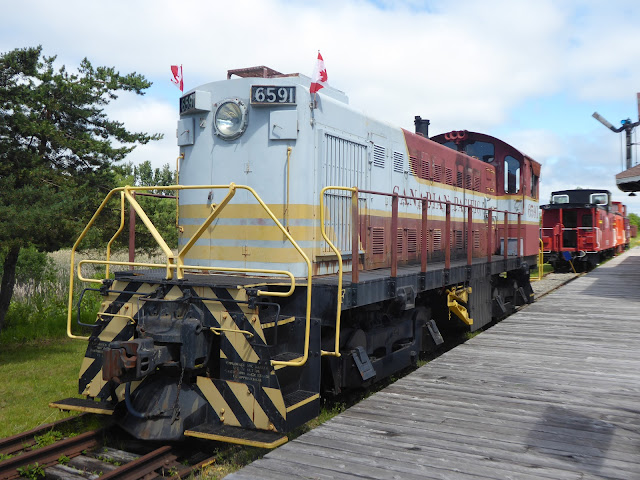 I couldn't get a shot of this old bench without my girls sitting on it. This bench is a new addition to the museum's collection and it is of particular significance to railfans from Ottawa. Why? Because this bench was just recently found in storage in Ottawa. It was originally one of the benches used by passengers at Ottawa's former Union Station downtown. The craftsmanship on this bench is amazing. The two lamps are part of the overall structure and were purposely crafted into the framework of this two-sided structure. It was recently donated to the museum, as it had no uses in Ottawa. I think this was the best possible outcome for this relic. Here, it will be appreciated by those who want to learn more about rail history. My girls loved it, as you can see. 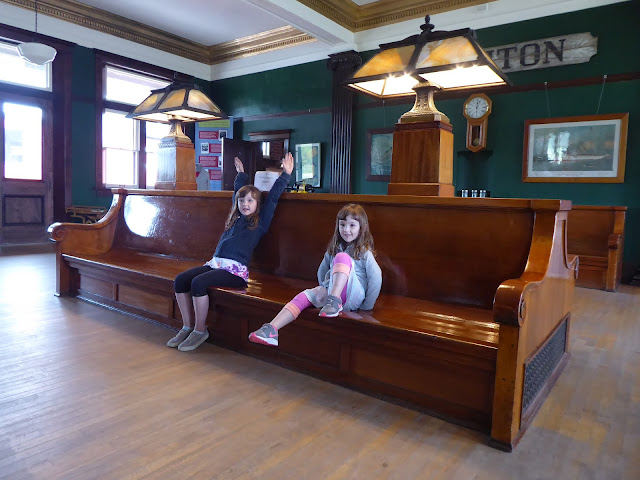 For those who haven't been to the Railway Museum of Eastern Ontario lately, there are some exciting developments happening here. A volunteer told me about plans to move an 1890s-vintage passenger car to the museum grounds where staff will clean it for use in the spring. It will be on the museum's grounds in November and will spend the winter indoors. The car will be put into "revenue service" (museum's words) in the spring and possibly be used for events or as a cafe down the road. Whatever the case, there are hopes this car will provide the museum with a much-needed new source of revenue, which can then be used to further preservation efforts. For more on this, go to the museum's Facebook page.

That's a museum on my list of "places to see"! I'm glad your girls enjoyed it.

That section house is indeed special. The railway stations themselves got a lot more love than section houses.

Whenever you are back in Ontario, Steve, this museum should be on your itinerary. It can easily fill a half day for any railfan, especially those who like to read all the plaques and signs like me. The addition of the 1800s coach certainly adds to the mystique!

Nice writeup about the museum! This museum is one of my favourites and definitely overlooked. Almost like a bit of a local secret that way which is good and bad.

Funny you should talk about the spitting bylaw - I spent a couple years in junior high before moving off to Trenton back in the late 90's and recall when the by-law was first put into place and then enforced (one of many odd ones like no backyard clotheslines and houses having to be painted in earth tones only). For me the best part was enforcement as I recall hanging around in front of the school at lunch and watching a by-law car pull up right around noon. The smokers (and a lot of these were the hard core, 90's punk/goth, "F*** authority" types) would routinely be on the sidewalks where they could smoke away from the authority of the school administration and would frequently spit everywhere. So everyday this poor by-law officer would show up and be running around after these kids in some attempt to get them to stop/ticket them. I doubt that he ever caught anyone successfully, but it was entertaining to see nonetheless.

I would have paid money to see that farce!