As I wrote about last week, a recent trip to the Canadian Pacific yard in Smiths Falls yielded some interesting finds, even if I was unable to catch a mainline freight making its way through town. I did however, catch the Perth Turn, just as it was about to take off for the Omya plant at Glen Tay. When the train, headed by an ECO unit, took off, it happily uncovered an interesting assortment of rolling stock in the yard, some of which I had never seen before. Given how little activity there is in this yard these days, you have to take what you can get, so I decided to focus on the rolling stock in plain view before calling it a day.

Here's the first car that caught my eye. It was patched for a leasing company but it was the centre logo, long since covered over, which had me intrigued. The AEX mark belongs to a leasing company listed as the Andersons. I have not been able to find any other photos of this car but I did find another car in this number series. Apparently, they were once ENDX (GATX) and NACX (GE Leasing) cars. Given its colour, which was once likely red, I'm hoping someone out there might find something recognizable about this car. I couldn't find much. 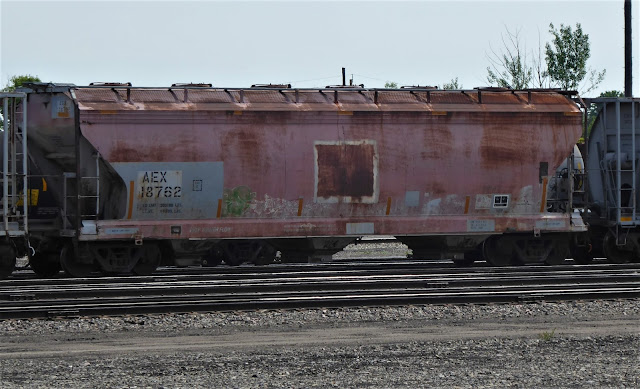 Here's another I have never seen before. This is the French side of the car, obviously, which prominently announces that the car handles chemical products. A close examination of this car shows that there was once an Alcan logo on the right side of the car. You can still make some of it out if you look really closely. The car is now patched RS, which means it belongs to the Roberval and Saguenay Railway, which would make sense, since that line is a resources (ore) carrier owned by Rio Tinto Alcan. This was one of my better finds in recent years. 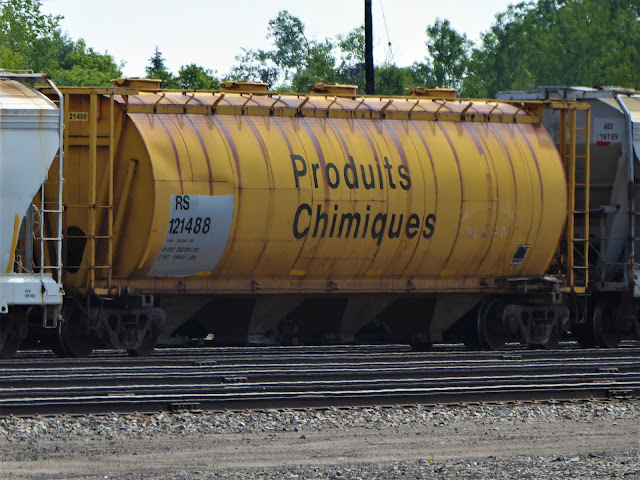 You may have noticed this car bringing up the rear of the Perth Turn in last week's post but I thought I'd share another shot of it in profile. I wonder if it might be a buffer car for this train's return trip. Although I can't imagine a train with calcium carbonate would require a buffer. Either way, it's an outlier on this consist. It's patched for CAAX, which is listed as a subsidiary of ConAgra. 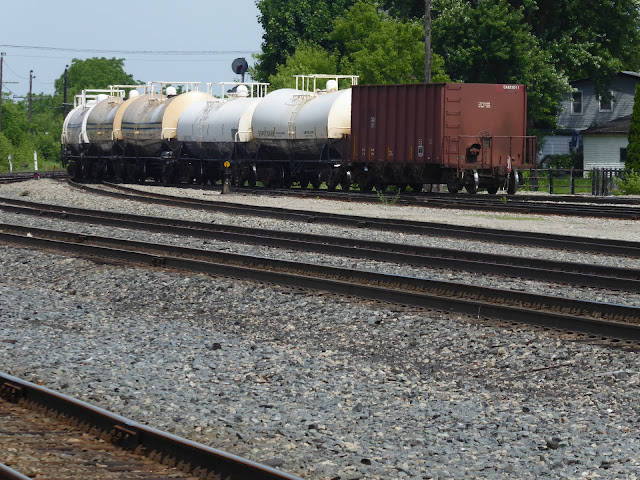 This is just a shot of a Norfolk Southern boxcar mostly hidden behind a line of tank cars. I was trying to find anything at this point, as there was not much else to capture. 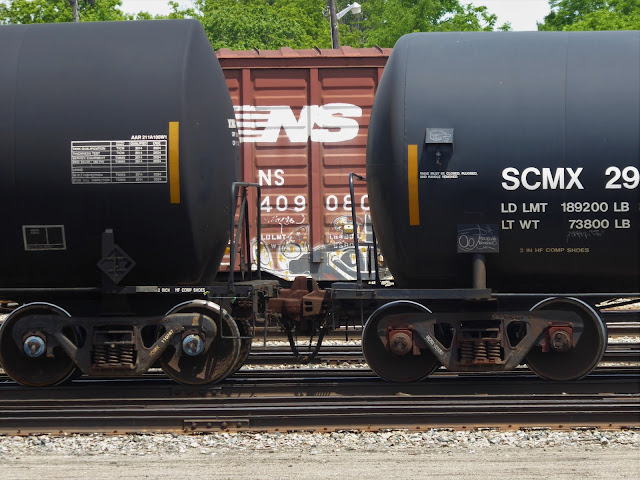 One final shot. I had to strain my camera's zoom to get this shot. A few fellow railfans thought this might be the end of a train whose crew had its time run out, but it stayed there throughout the morning that I was trackside. A subsequent visit to this yard the following week showed that this consist was still in the yard for whatever reason. I guess car dwell time wasn't a big deal in the case of these cars. 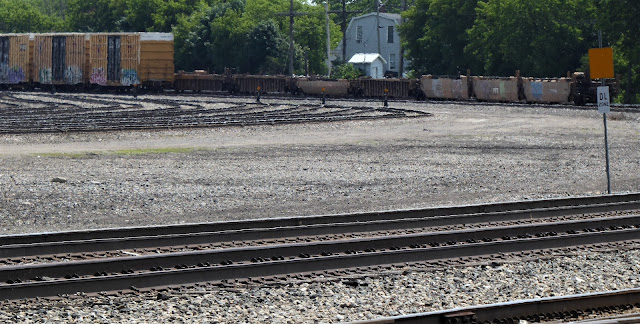 As I mentioned, I was at this yard a week after this visit, as I brought my daughters to the Railway Museum of Eastern Ontario nearby. While trackside at the yard for a brief moment, I managed to once gain catch the Perth Turn and few other items of interest. I also have a few thoughts and tidbits to share about the railway museum. Stay tuned for more dispatches from Smiths Falls. I didn't intend for this summer to be a Smiths Falls extravaganza, but I'm hoping it's a breath of fresh air for those who might be tiring of endless Ottawa photos and non-news items (read: O-Train). I know I'm enjoying putting these posts together.

Speaking of news, the RTG Group has told the city that the first phase of the Confederation Line is ready to hand over. More than a year past their deadline, they are done, apparently. We'll see...
Posted by Michael at Thursday, July 25, 2019

Thanks for the rolling stock roll-out, Michael.

The Andersons have a very diverse aggregation of cars. I'm wondering if the reddish hue might be primer coming through the grey?

RS 121488 is VERY interesting. This would have been part of a UNPX/Alcan car series that I included in this post:
https://tracksidetreasure.blogspot.com/2016/03/alcan-covered-hoppers.html

I also wonder if this car headed to Avens in Brockville, as do some of the SCLAIR covered hoppers.

I'll bet those well cars are stored in the yard - often the case in nearby Belleville on CN.

Oh, and I'd like to include your RS photo in my post on those cars, with appropriate photo credit to you, if that sounds OK.
Thanks,
Eric

Sure thing, Eric! I'm always honoured to contribute to Trackside Treasure! Thanks for stopping by.

Those RS cars are indeed being interchanged to the CP in Brockville for spotting at Axens.

Thanks for the info, sir. That's why I often throw things out there for those who are much more knowledgeable than me.