What a difference a year makes

So I finally was able to catch something trackside, for the first time in months (and I won't say how many). A number of life factors have occupied my time. But this past March Break, I did manage to break away on Wednesday afternoon to catch the Arnprior Local as it passed through Bells Corners. I have noticed in the last few months that the local usually passes through around 4:20 p.m. as I am getting off my bus and walking home. I often hear the local's horn as it approaches my neighbourhood, so I was reasonably confident that I would catch it this past Wednesday. And I did.

I have a fair number of thoughts to share from this brief meeting, but I will leave that until next week, along with the rest of the photos of this two-car train. But the only thing I will mention this week is how much a difference this year's winter made to my shot, compared to last February, when I caught 589 last.

Here's this year's shot of 589, led by GMTX GP38-2 2260. Yep, that's a full fledged March snow squall. When I arrived at this spot a half hour earlier, there were only light flurries. 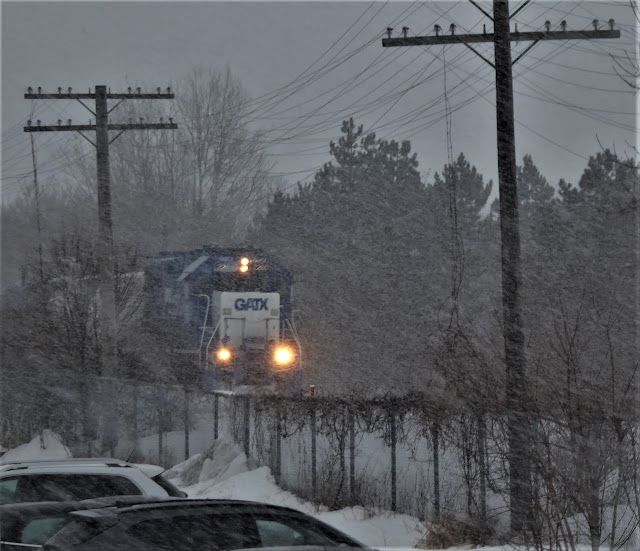 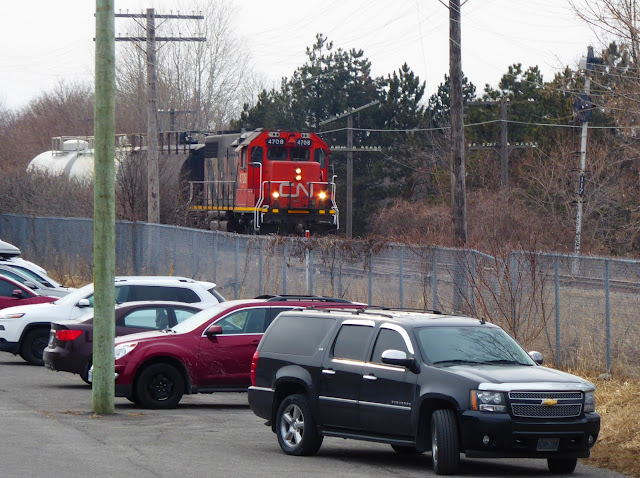 Yep, it's been that kind of winter!

I have a number of thoughts to share about this meet, but I wanted to leave that for another post. I simply wanted to point out that it's been a long winter in Ottawa. Aside from the massive snow piles at the end of this parking lot (I estimate I was standing on the top of  10-12 foot high pile), which made the shots of this train much easier both times, I'll be glad when spring eventually arrives.

Whenever that is. As I write this, they are calling for another possible 10-15 cm of snowfall for tomorrow. Sigh.

Liked that GMTX unit in the header photo and then in the post too, Michael. For a brief shining moment, we had two GMTX's based out of Belleville working to Kingston. Recently, it's been only one matched to a CN unit.

Keep us posted on those thoughts!
Thanks for sharing,
Eric

Thanks for stopping by Eric. To be honest, I wasn't expecting a leased unit. I hadn't caught up with 589 in a year and really had no expectations. It was a nice surprise.

I saw the GMTX unit pulling a train out of Walkley yards today crossing Conroy. Does CN normally run trains from Walkley on a Saturday? It was a good length too.

They do, Andy. Most likely they were running out to Coteau to exchange empties for loaded cars. I think it's a weekly run. They gather the loads they need to serve their customers in Eastern Ontario (Ivaco, Kott Lumber, Nylene Canada etc.) and then run their locals through the week before doing an exchange on Saturday.

I also haven't had a meet there in atleast a year. Having your office moved closer to downtown will do that unfortunately.

But if there is any silver lining here, it is that moving forward after today, spring should finally be here in full force and the snow should be away until November. I am just as frustrated about how long the winter has been, both because I felt like I had that cold that you couldn't shake for about a month and because I am absolutely antsy to get the Mustang out of the garage for a spin (ideally for some trackside scouting!).

Anyway looking forward to hearing your meet write up!