30 for 40 Bonus: A lifetime of Via Rail memories from Kingston platform

To cap off this series of Via memories, I reached out to one of the country's most prolific railway bloggers, Eric Gagnon of Trackside Treasure. He has graciously shared this excerpt from his fine collection of Via Rail books (four, count 'em, four in total). Please see the bottom of this post for more information on Eric's books and how you can get your hands on them. - Michael

To be trackside in the Corridor in VIA’s early era was a colourful cornucopia of sights and sounds. At the time, the continuation of operations from the CN into the VIA era provided many of the same sounds but some new sights. At Kingston, time spent on the platform revealed VIA blue & yellow making inroads into CN’s black & white scheme. Platform-filling consists prevailed, with baggage cars, meal service cars, coaches, club cars and even the occasional CN business car tagging along. 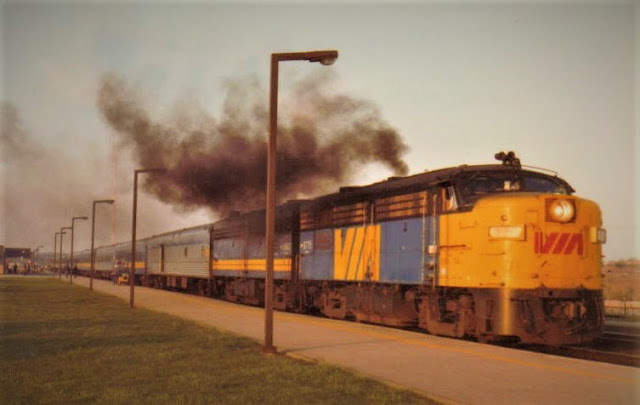 Positioning oneself to see the approaching consists in review, inevitably ending up next to the locomotives, each consist could be viewed twice. Bell ringing, the train would be halted at the ‘pheeeep’ of the air whistle in the cab. Brakes squealed and running gear clunked and groaned. Locomotives would be brought to idle, coach Dutch doors opened, and stepboxes would be dropped onto the platform. Handrails wiped, suitcases and babies lifted from vestibule height to platform height by trainmen and conductors, baggage wrangled by the baggageman before returning to his wooden stool in the baggage car.

Rising and falling, MLW 251’s burbled continuously. GMDL 567’s had a drumming idle. Though serendipity sometimes prevailed providing solid MLW or GMDL locomotive consists, mixing together of both makers’ models was liberal. Some enginemen would roll down the window to converse with us ‘train buffs’ while other crews would busy themselves with various cab duties, or simply stare grimly ahead! 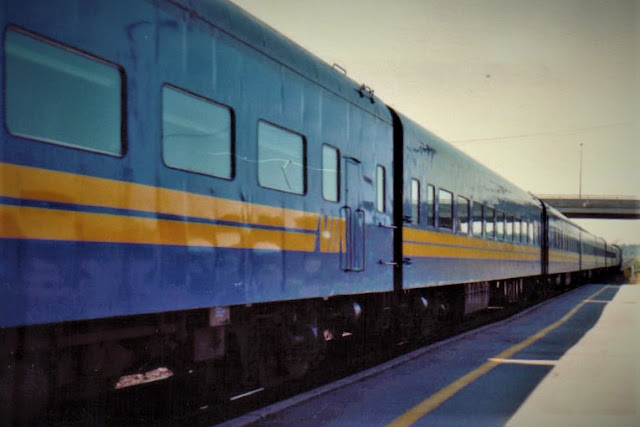 The highball from the conductor was soon followed by the ‘pheep pheep’ on the air whistle, often answered by a ‘barp barp’ of the air horn. A tug on the coupler. Bell ringing once more, smoke-belching MLW’s and the chant of transitioning GMDL’s rising to a crescendo, co-conspirators in a cacophony of sound and smoke sent skyward. Wheels banged on rail joints prior to the advent of continuous welded rail. Faces looking out - listless coach passengers, comfortable club car patrons, convivial comrades in the ‘bar car’. Prior to tinted glass, the panoply of passengers went past, continuing on their voyages. Soon it was just the last vestibule door, marker lamps and sometimes the hot breath of escaping steam as the train pulled away.

Thanks to Eric for sharing this almost poetic tribute to the early days of Via Rail. Most of you know that Eric has written four books about Via Rail, all of which are available through this blog, dubbed New Via Rail Book. To skip ahead to the order form, click here. When you get there, you have the option to pick among these four books:

I should also mention that Eric has also written Trains & Grain Volume I and II, which detail his time trackside with Canada's iconic grain trains. Those books are also available through the Grains and Trains blog. I should also mention that shipping to anywhere in Canada is included in the prices. You can contact Eric directly at mile179kingston@yahoo.ca.
Posted by Michael at Wednesday, December 19, 2018