A year of firsts

I didn't get around to putting together a post about the best moments from 2017, although I did devote one post to the Via Rail highlights (and there were many!). So, although it's nearly February, I wanted to take a look back at some cool moments trackside from 2017. Although my time trackside was miniscule last year, I was happy to have some incredible luck this year.

The first instance of some good luck happened in May when my family made a trip to Southwestern Ontario to visit family and attend a family reunion over the Mother's Day weekend. I made my way to Wyoming and camped out at the town's tiny Via Rail station, hoping to catch a freight train on the Strathroy Subdivision.

After sitting for an hour, I was just about to return back my Dad's house in Petrolia when I saw something far off in the distance making its way west. The best part of this freight train was that it had five (count 'em) engines leading the way. This is a rare site in modern railroading, as most modern diesels are matched in pairs or trios on the head end of a freight train. This lash-up reminded me of watching trains when I was younger when four to five engines on the head end of a train wasn't all that uncommon. So, mark it down as the first time I have seen this type of locomotive line-up in many years. 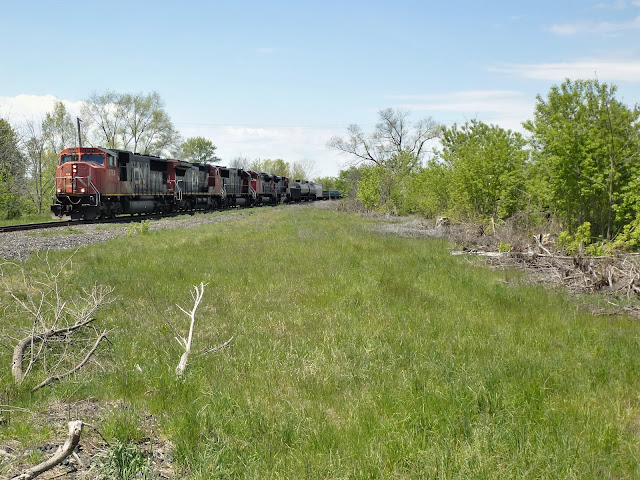 Later in the summer, I was again visiting family in the Sarnia area when I caught my first train on the St. Clair River Industrial Spur near the Rokeby Line, south of Corunna. I lived near this spur when I was growing up, but I was never able to get a shot of any trains on this line. I managed to catch this rain switching near the Suncor ethanol plant. Check out the old motive power and the giant power lines. This might be my favourite shot from last year. 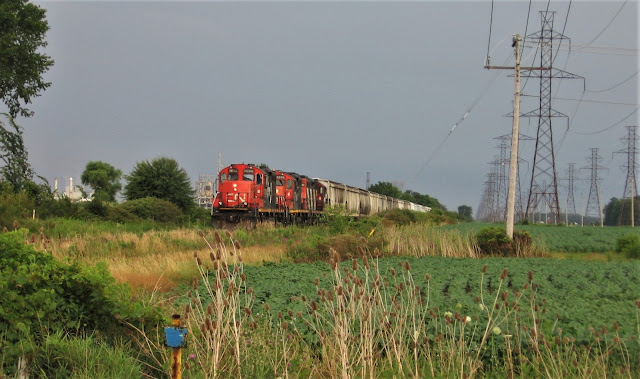 During the same week in late July/early August, I was able to stay at my sister's house south of Corunna. Her property backs onto the CSX Sarnia Subdivision, which is a pretty quiet line these days. I was hanging around my sister's backyard, as my daughters were enjoying an afternoon siesta when I heard a train approaching the nearby Rokeby Line. I was able to position myself near the tracks and get this shot of a short train heading back to Sarnia. 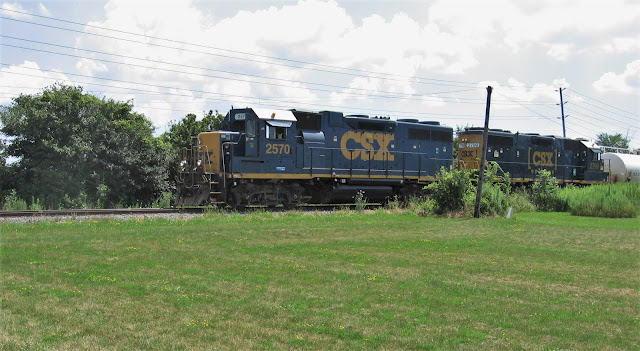 Later in August, I was in London for a family wedding when I was able to break away from the family events to get some trackside time in. I saw a number of cool things during my time at the CN London East yard and the CP Quebec Street yard. At the CP yard, I was able to watch a local doing some switching, which included my first golden rodent-clad unit. 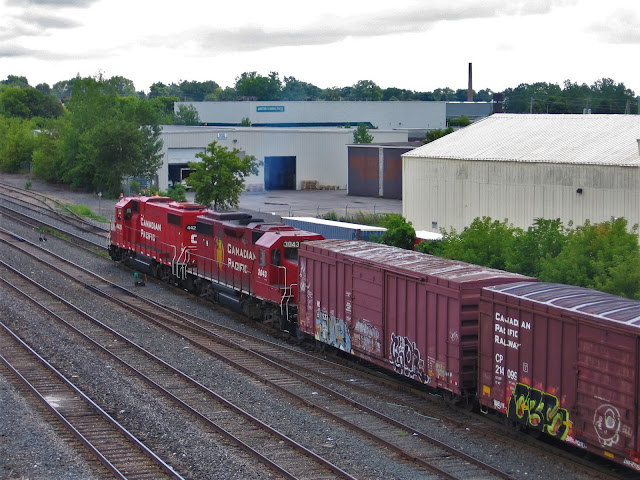 At the London East CN yard, I saw a lot of interesting things, which you can see in this post, but the highlight was a CN container train rumbling through. I don't see these trains at all, since Ottawa had no mainline action of consequence, so it was cool to see my first container trains in years, especially from the Highbury overpass. 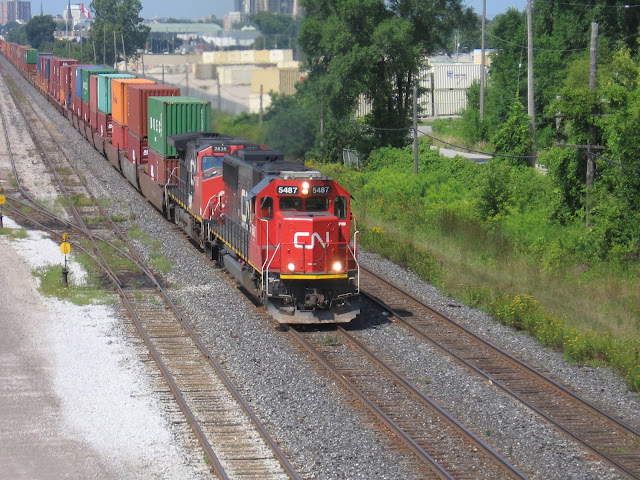 In October, I came across an idling mixed freight that was parked in between Wyoming and Camlachie Road. You can read about this meet here. This was a surprising meet for me, since it was the first time I have seen two cowl units on a freight train. It's always cool to come across these relatively rare units, but having two on the same train was especially cool. 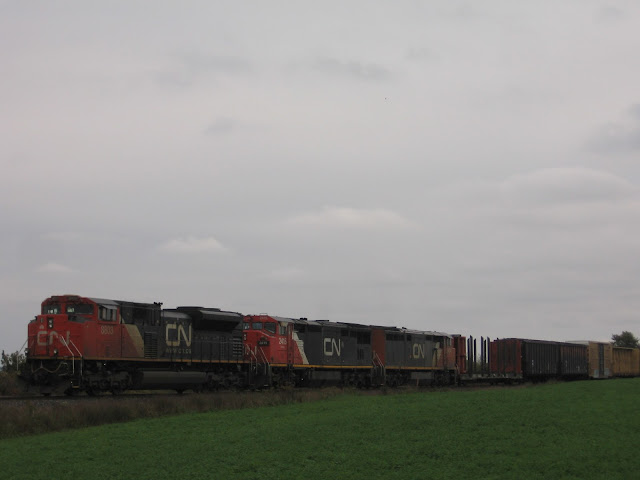 And as you may have read from this recent post, I was quite happy to catch my first Goderich Exeter Railway action shots in Kitchener in November. You can read about my adventures in Kitchener in this post. For those who missed it, I caught a duo of GEXR units tying up at the Kitchener railway station, including this unit, LLPX 2236. I didn't share this photo in my original post. 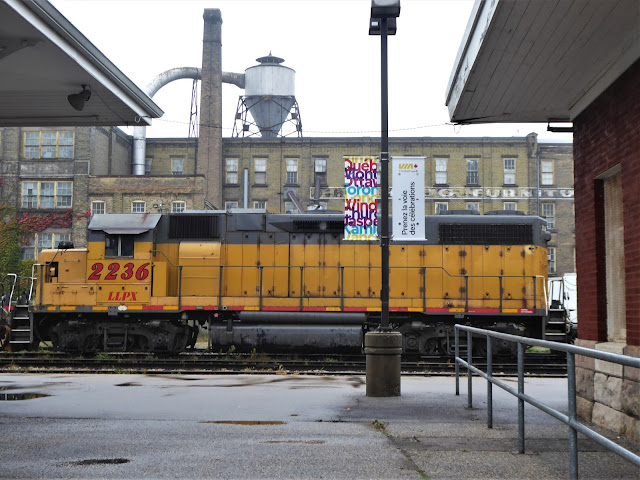 There were a number of other firsts last year, but these are the ones that I feel are most significant. Last year was a year where much of my trackside time was condensed into a few jam-packed weekends. I'm hoping to get going on some photography this year. If I can check off half as many items from my to-do list as I did last year, I'll be quite happy.

It's been a while since I've seen 5 units on the head end too!

I really like that second photo with the Geeps.. great light and great composition.

Railfanning with family, or at least because of family is what I would call the best of both worlds!
Good memories from 2017, Michael!
Eric

Nice job! You definitely had a great year in breaking firsts.

It is just too bad that none of these firsts could be around the Ottawa area. I see containers all the time, but it's because I am down around Prescott or off Bedell. My hope this year is more first locally!

Thanks gents. I wanted to do a year in review, but life just got in the way and I wasn't able to get around to it until now. I really do hope I can get some more local content in the mix in the coming months.

Here's hoping! Should have the light rail to look forward to this year. I am switching buses at Tunney's in the afternoon so I see a lot of the work they are doing with the station/line there.
I was never a fan of going to light rail route in this city (I think everyone here knows that already lol), but it is nice to have something fresh to be excited about that is rail related in Eastern Ontario!