With my last post about my weekend of railfanning in London in August, I wanted to share some photos of a long freight train I caught up with in CN's London East Yard. I was on Egerton Road, a city street that literally crosses the entire rail yard (six tracks at this crossing, if you can believe it). I noticed from a signal that a train was making its way from the west so I decided to head back a few tracks and get a few wide shots of the slow moving consist. I tried to frame the train around the excavator in the middle of the yard at first. 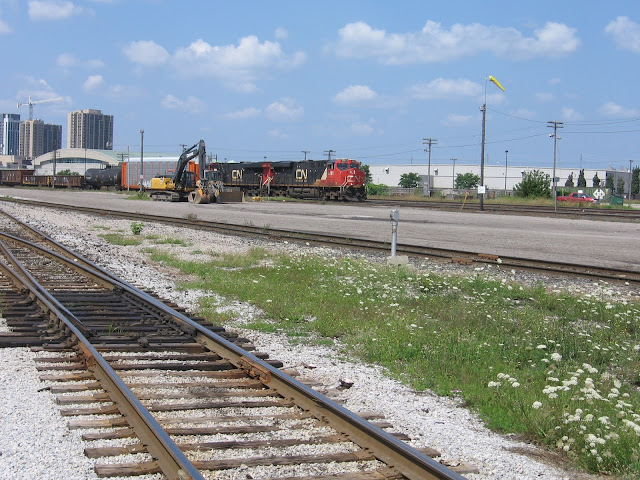 Here's a better attempt at incorporating the construction equipment with the train. As I have mentioned throughout this year, I really feel as though my rail photography has improved this year, since I have paid better attention to details like these construction vehicles that are trackside. The results aren't always there, but I was happy with this shot below. 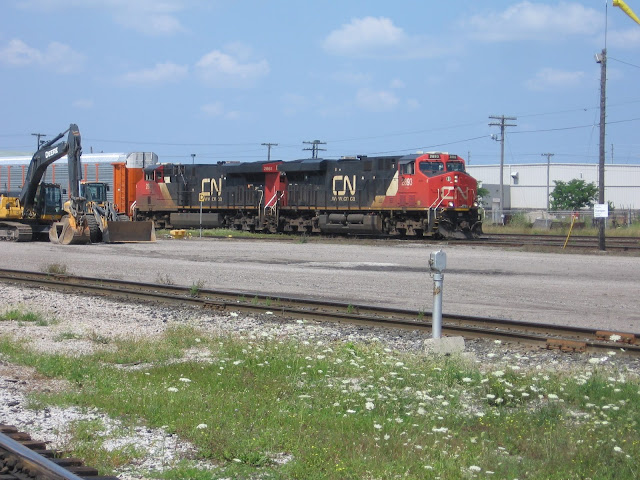 After a few shots with the construction equipment, I pulled the lens back to try and get a wide shot of the train. I was intrigued that a single autorack would be the buffer car between the two lead units and the tank car behind it. I don't often see autoracks leading a mixed freight consist, but readers have assured me before that it does happen.

I also tried to keep an eye peeled for some interesting rolling stock. Sadly, this train didn't have a lot to offer, but I did manage to catch this old RailGon gondola, which is now patched DJTX. I recall seeing a better shot of this type of gondola in another blog recently. The logo is barely visible in this shot, but I'm glad I got the shot nonetheless. 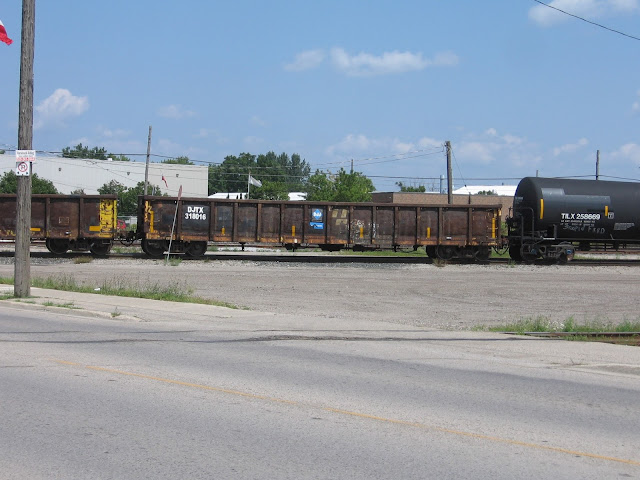 I love seeing these carbon black hoppers, since they remind me of the old Cabot Carbon fleet that once graced the St. Clair River Industrial Spur in the Chemical Valley in Sarnia when I was younger. At some point, the cars lost the Cabot logo, which was usually stenciled top right. 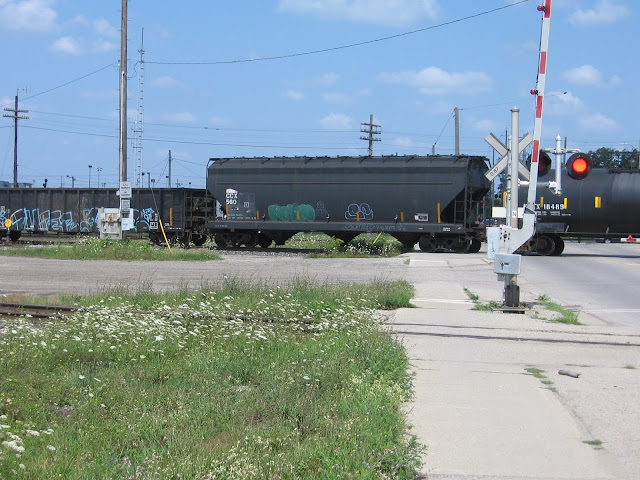 This shot shows you the train making its way through the yard. As the train made its way past Egerton Road, I noticed it was crawling to a stop. I took a few shots of the train going away and scrambled back to the Highbury overpass (you can see it just beyond the front of the train. Also, can you see the yard geep in the right of the image?). 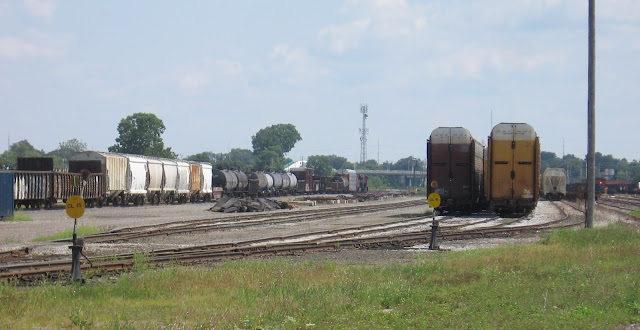 As I made my way up the overpass sidewalk, the lead units were uncoupling from the train, although the autorack and tank car were kept in tow. I tried to get a shot of the train alongside three of the yard units. The wires frustrated my efforts, but I thought I'd share this shot anyway.

Here's a closer shot of the two lead units making their way toward the overpass. I tried to capture the two workers in this shot, but I couldn't work around the one wire. 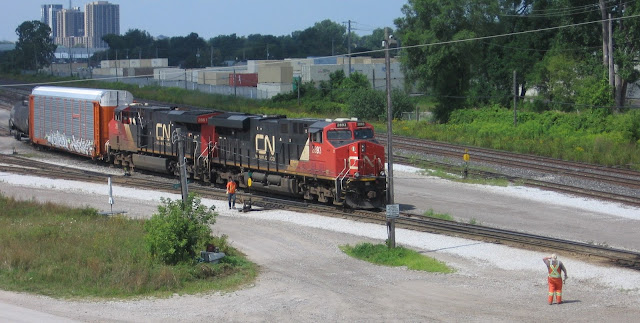 The two units made their way under the bridge, which allowed me to get these overhead shots of the vents, although the afternoon light washed out a few of my shots. Yeesh. 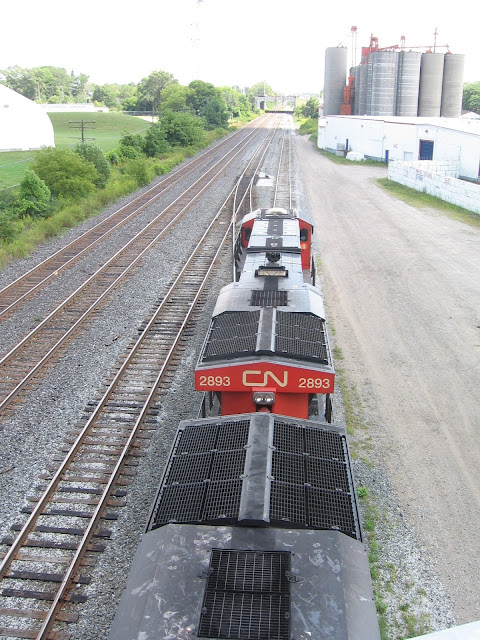 I shuffled around a bit and tried to mitigate the effects of the sun. I was pretty happy with this shot. 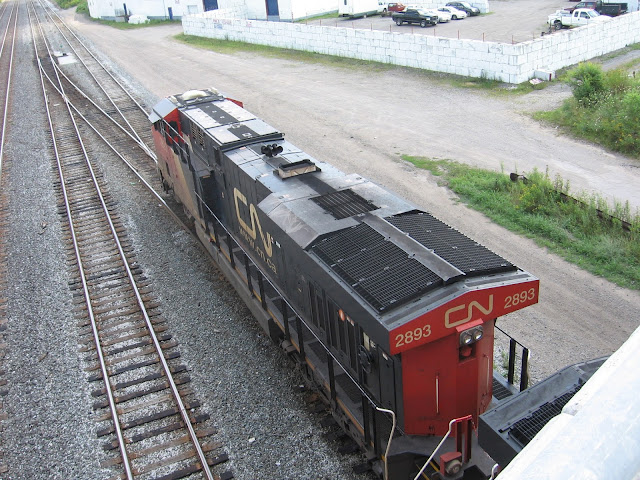 So, that concludes my five part series based on a single weekend in London. It was a great weekend for me and a lot of fun. Next week's post will bring me back to Ottawa. Lots going on here with the O-Train Confederation Line. Lots to talk about. Stay tuned.
Posted by Michael at Friday, October 20, 2017
Email ThisBlogThis!Share to TwitterShare to FacebookShare to Pinterest
Labels: Canadian National, CN, Dundas Subdivision, freight trains, London Ontario, railfanning, Southwestern Ontario

The CCX reporting marks on that carbon hopper correspond to Columbia Carbon. It never would have had a Cabot logo as it's owned by a different company. Columbia Carbon has a facility in Hamilton, so it could possibly be headed there for loading.

I think that the DJTX gondolas are part of the massive CSX sell-off of older cars. CSX had a large collection of ex-RailGon cars that had come up via C&O and B&O, and these DJTX cars only just started showing up in the last year.