I've read about so many chases in other blogs over the years, but realized recently that I've never really had a good, long chase with a happy conclusion. Until now.

Recently, my family travelled to Southwestern Ontario, where we were visiting family. I decided to travel from a spot in rural Perth County, where we were visiting grandparents, to my hometown of Corunna using nothing but country roads. I did this with good reason. One of the roads that would lead me toward Corunna paralleled Canadian National's Strathroy Subdivision from its namesake town all the way to Sarnia. That drive would offer me a good chance to get photos of a freight train, since the road I was on (named Napperton Road in Middlesex County and Confederation Line in Lambton County) is not only close to the Strathroy Sub, it is also traversed by a number of intersecting country roads that lead to the tracks. Easy enough, right? Wrong.

I had just checked out two level crossings in Strathroy before I headed out onto Napperton Road, as I was convinced a meet was not going to happen in that town. I was about five minutes outside of Strathroy when I noticed the tail end of a freight train thundering its way west toward Sarnia, and at quite a clip. Clearly, I was going to have to drive for a while to catch up and maybe dart down a road (safely, of course) to catch this train. I managed to reach the head end of the train after about 10 to 15 minutes of patiently trying to catch up. I fired a few blind shots with my camera, being sure to keep my hands on the wheel and my eyes on the road. Needless to say, very few turned out, especially considering how far the track was from the road at this point. 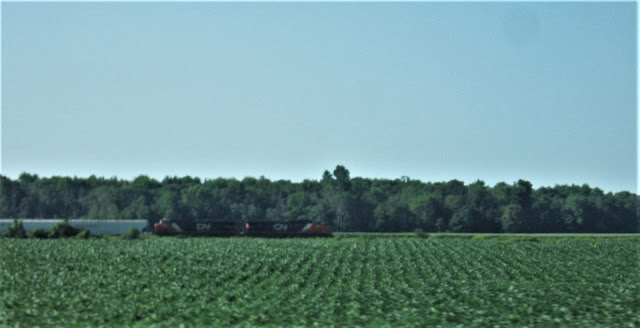 This shot reminds me of some of the shots I took with a cheap camera in the early 1990s. It's blurry, but given the distance to the tracks and the movement of my car, it was the best I could do. This gives you an idea of where I was in relation to the Strathroy Sub.

The chase lasted far longer than I had anticipated because of a few wrinkles, mainly the fact that the road I was on passes through Kerwood, Watford and Wyoming before it reaches Sarnia's city limits. I managed to get ahead of the train by the time I reached Watford, but the speed limit near the Confederation Line-Highway 79 intersection fell to 50 km/h, which meant the train passed us, as it was maintaining a steady speed of about 80-85 km/h.

The train must have slowed a bit because as I pulled out of Watford and continued west, I found myself just about caught up with this massive train by the time I hit Wyoming. I was hoping to pull ahead of it and catch it at the Broadway Street crossing, just like this meet I had at the Wyoming Via station earlier this year.

But the slower speed limit in Wyoming (again 50km/h) ensured I would have to catch up to this train again. The slowdown in Wyoming was made worse by the fact that a tractor trailer took an unusually long time to turn from the Confederation Line onto Broadway.

So, after more chasing, I was finally able to overtake the train for a third time as it neared Sarnia. In fact, I managed to set up on Blackwell Side Road, the last road the Strathroy Sub crosses before it enters Sarnia yard. If you're keeping count, that means I had to cover about 60 kilometres before I was able to get proper shots of this train. It's a good thing I was heading in this direction anyway otherwise that's a lot of time and distance devoted to one train.

Here's what I saw. 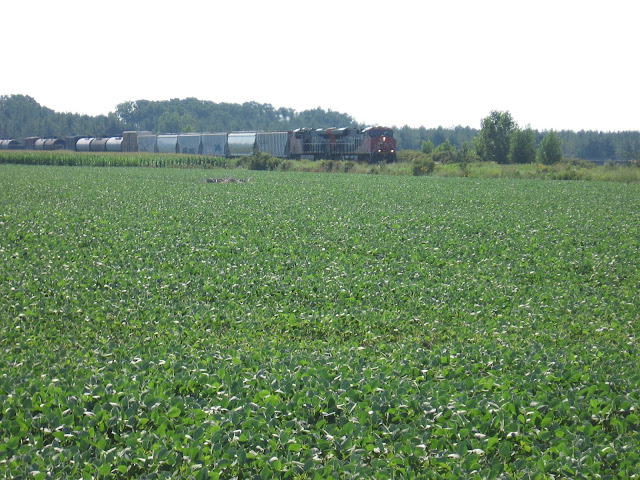 The early morning sun washed out the sky beyond the limits of my photoshop program. However, I did like that I was able to frame the train against this farmer's field, which looked to be a soybean crop. Had I been given the luxury of a little more time, I would have been able to cross the tracks and set up in a more sun-friendly location although it was still fairly early in the morning (before 9 a.m.) so the sun would have posed a challenge from any angle. 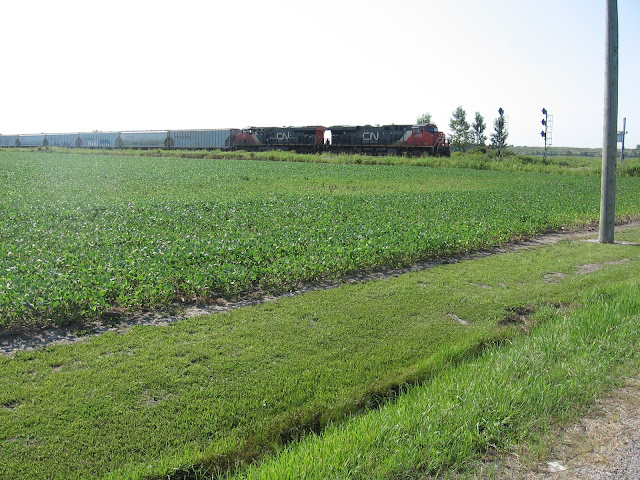 Here it is a little closer. Note that the position of the sun was such that the sky began to reveal itself a little more in this shot. A typical cut of covered hoppers led off the consist, likely destined for a number of refineries, possibly in Sarnia or possibly farther afield in Michigan or Chicago, depending on where this train ended up.

Above you see the going away shot (with blue sky). Below is a shot of the power crossing Blackwell Side Road.

Now, staying true to my recent emphasis on rolling stock, let's see what CN ES44ACs 2875 and 2916 were pulling. 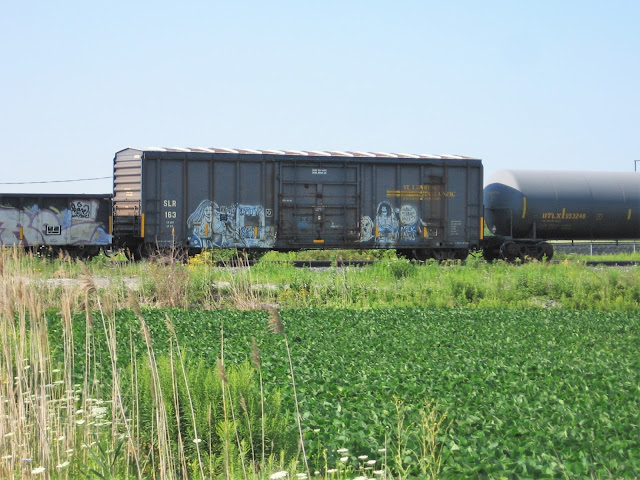 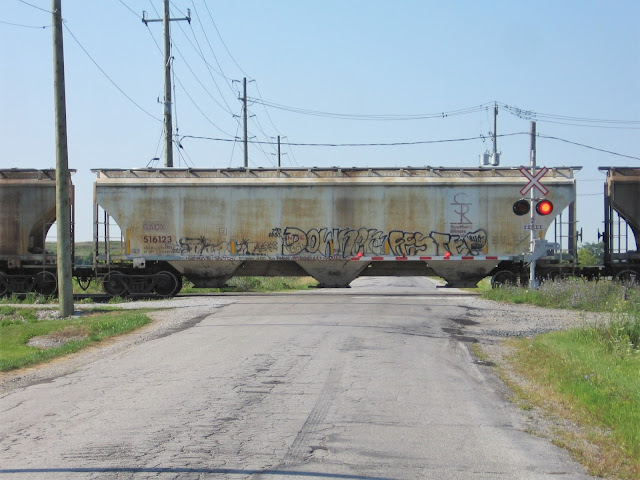 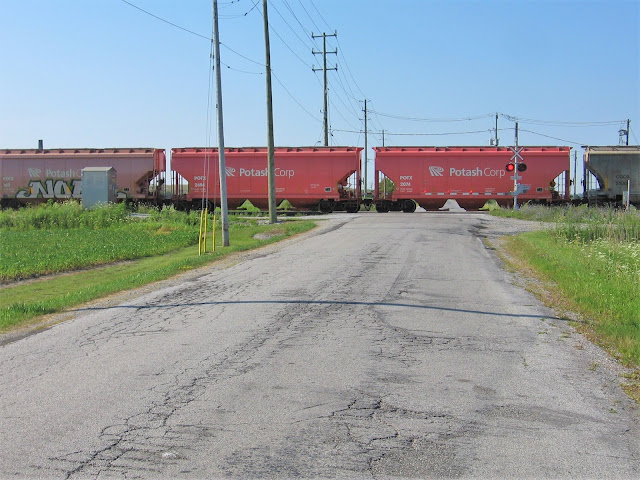 Some of the more colourful hoppers out there today - Potash Corp. hoppers. It's always refreshing to see rolling stock on the rails that isn't just a blank sided car with the reporting marks of some leasing company. 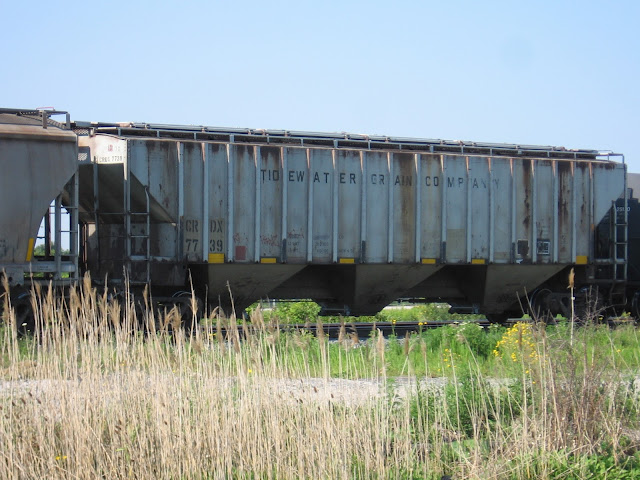 Tidewater Grain Company  GRDX 7739 hopper looks like it's seen a lot of action and a couple of touch-up paint jobs. 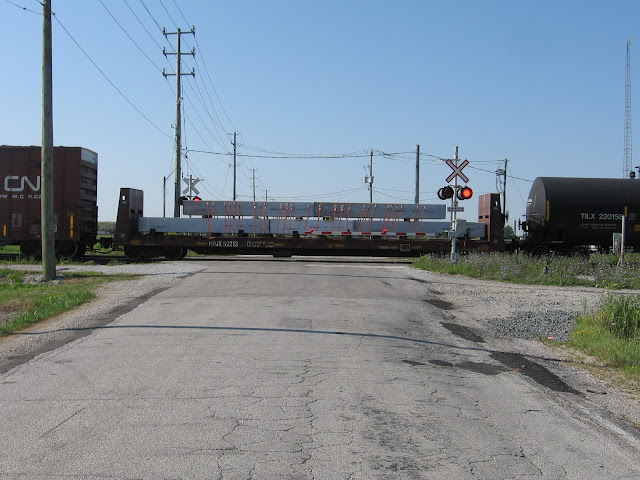 Who says flatcars are boring? Steel a glance at this load! Reporting marks HJPX. Another first. 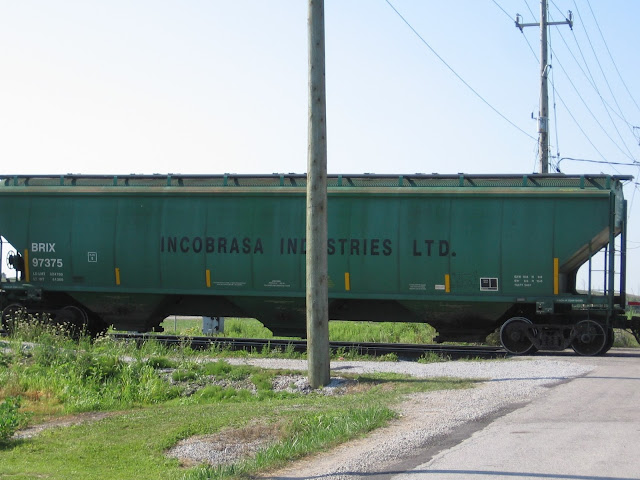 There were a lot of visual hazards near this crossing, so not every picture was distraction free. However, despite the pole, I was pleased to catch this BRIX-patched hopper, branded for Incobrasa Industries of Illinois. This company deals with soybeans and makes all sorts of products based on soy. So, through observation, it appears that this train had a definite Illinois flavor to it (there were also a few Wisconsin Central and Illinois Central cars). Of course, most trains rolling through Sarnia are headed for Chicago, so this is hardly surprising to see.

I made sure to take a quick couple of shots of long strings of freight cars just to serve as a reminder of how long this train was. With the exception of the trains with mid-train DPU, this was one of the longest consists I have seen pulled by two lead units. 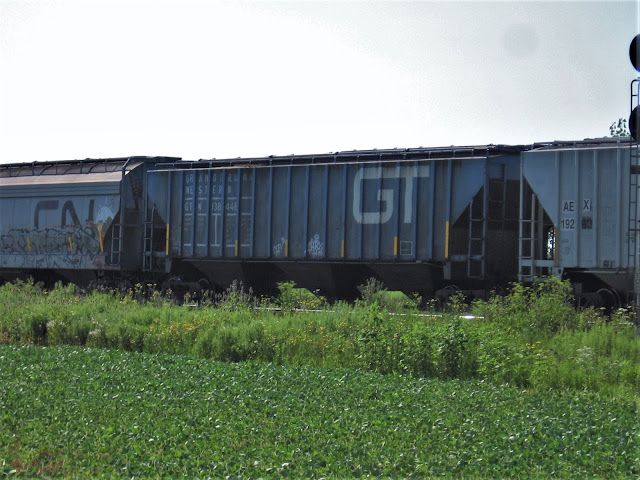 Always a bonus when I come across a fallen flag (sort of). I used to have multiple photos of GT and Central Vermont rolling stock, only to lose those shots some years back. Now, I at least have one shot of a GT hopper. I wish the light was more forgiving, but still a great catch for me. 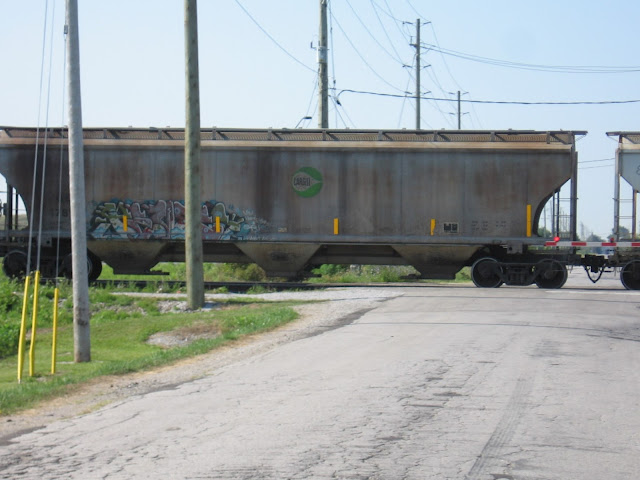 Also, it was great to catch a Cargill-branded hopper. As previously mentioned, anytime you see rolling stock with any colour, it's worth capturing. I have not seen many hoppers painted for Cargill, which has a huge grain and oilseed elevator facility on Sarnia Bay, served by the CN Point Edward Spur. 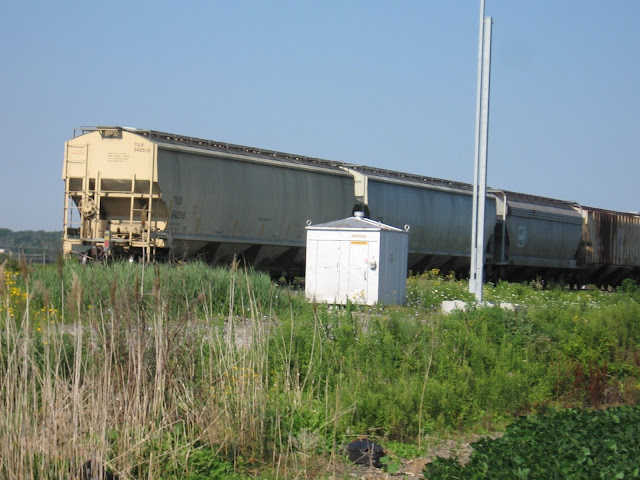 Posted by Michael at Wednesday, September 06, 2017

That's quite a chase! I'm glad you were able to get ahead to capture the entire train... finally.

Nice collection of interesting rolling stock. I like the GT cars too - quite rare around here - and I've caught a few cars with the Cargill logo on them with CGAX or CGOX reporting marks.

Yeah, I hesitated to mention the distance, because some would think I was crazy to devote so much time and kilometres to one train. But luckily, it was on the way. This train was a monster. Thanks for stopping by, Steve.

The Tidewater Grain CRDX P-S covered hopper, the very clean and still legibly-lettered (i.e. not faded/rusted) GTW covered hopper, and the HPJX car with ingots were standouts. We do see 2-20 Helm Pacific/HPJX and CN ingot cars here through Kingston, with the former quickly displacing the latter! Looks like the chase was very fruitful!

Yes, one might wonder how an old GTW hopper could survive so long with hardly a trace of graffiti. I was glad that it did, though. If you think that flatcar was a standout, just wait and see what I caught in London! Stay tuned for that. Thanks for your comment, Eric.