Once again, Ottawa drops the ball

I shouldn't be surprised by the city's latest gaffe on another piece of rail infrastructure. But even by my low expectations, the city's decision to do nothing about the Prince of Wales Bridge is astounding. 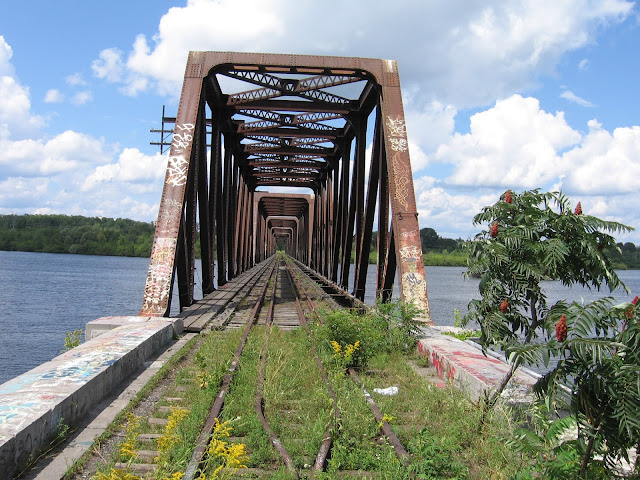 The city is considering spending $300,000 to fence off the 136-year-old bridge to prevent people from using it as an informal link across the Ottawa River. For those keeping score, that means the city has essentially sat on its hands since it purchased the bridge in 2005.

So, let's simplify things before I go off on yet another rant about this city's utter lack of vision when it comes to railways.

This bridge could essentially be used for two different things right now. It could either be transformed into a recreational pathway, which would seem like the typical thing for Ottawa to do. I wouldn't mind this option, except for one tiny little detail.

This railway link represents this city's only chance to expand its light rail system into Gatineau. So far, neither Ottawa nor the City of Gatineau seems terribly excited by the prospect of extending the O-Train into Quebec. I understand there are complexities with extending an Ontario railway into Quebec. I understand there are jurisdictional issues as well as questions over how such an extension would be funded.

But once this bridge is gone as a railway link, it's gone. There are no second chances. And, if these cities don't think light rail is necessary to facilitate the movement of commuters between the two sides of the river, consider the alternative. All the interprovincial bridges are packed at rush hour, since so many public servants travel across the river for work. In fact, it's well known to everyone in the capital region that both Ontario and Quebec would dearly love to have one more bridge spanning the river to take the heat off  the Macdonald-Cartier, Champlain, Alexandra and Chaudiere bridges.

This Prince of Wales Bridge represents a relatively affordable alternative where thousands of cars could be taken off the road every day. No new bridge to build. Easy, right?

Nothing is easy in the capital when it comes to rail.

I applaud the recent efforts of the Moose Consortium, which has attempted to hold Ottawa's feet to the fire when it comes to this bridge. The consortium's dream is to tie together what is left of the rail network in the capital region and create a private regional rail network, similar in scope to GO Transit in Toronto, if not in ownership.

For years, this group has urged the city to at least maintain the Prince of Wales Bridge to keep it in reasonable shape should there be a change of heart.

The situation has gotten to the point where people are actually signing a petition to save the bridge, although I think most signees are joining the fight in order to convert the bridge into a recreational pathway.

Happily, there seems to be a chance that the city will reverse course and actually stop this plan to fence off the bridge and leave it to further deteriorate. In recent days, some councillors have mused that this plan is not a done deal.

We can only hope that, one day, someone will see the value of this bridge. 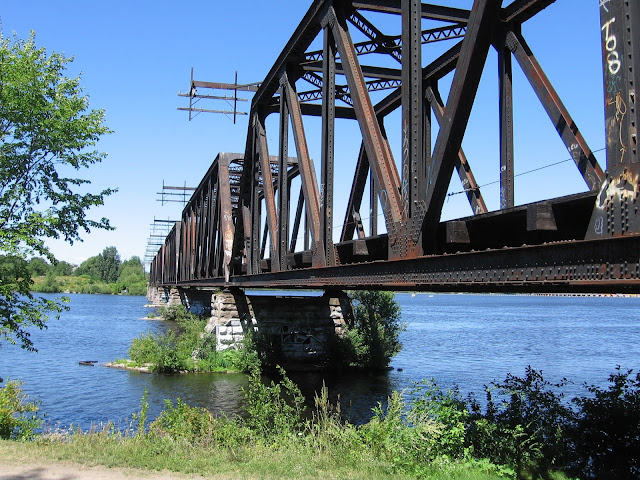 I'm honestly surprised it hasn't been converted to a recreational pathway already. That seems like the typical thing to do. It wouldn't be the worst thing but it would definitely close the door on any chance of using the bridge for light transit.

I am surprised the city would back away from making this a recreational path, which to me suggests this bridge is in far worse shape than people realize.

My only comment (which is really directed at the Mayor) is that the city is far more interested in the photo ops from a "sexy" billion dollar tunnel for the streetcars and now one to link King Edward with basically the 417 to get the heavy trucks out of the downtown core, than they are with what would be a modest, yet cost effective cost of refurbishing the existing bridge and running the O-Train or something like that over it. But hey - my taxpayer pockets are endless....

That said, my cousin is one of the many who trucks through the downtown core to get to the Quebec side and he hates it. All of his colleagues hate it too. The traffic is bad and they obviously aren't helping it. But imagine the value of opening up this bridge to train traffic? It all proves there is no longterm planning at city hall past the next election.

You hit the nail on the head, AJ. I also find this council is more concerned with a snappy photo opp than it is with sound, long-term planning. I maintain my point that there is something seriously wrong with this bridge when the City of Ottawa backs away from creating a recreational trail. This city has never seen a trail it didn't want to create.

It's my understanding that the bridge is protected in Ottawa's Master Transportation Plan as a transit link to Gatineau. So as long as they don't amend the Master Plan, they can do what they like with it (fence it off, make it pedestrian-only, etc.) but in the fullness of time trains will run again. Hopefully in our lifetimes!

The way I see it, the main obstacle to reactivating the bridge as a rail corridor is lack of demand. Unless someone can prove that enough Gatinois(e) will pay OC Transpo train fares at Alexandre-Taché to get to work, the city of Ottawa will have no incentive to extend LRT across the river.