I love travelling along Highway 401 through Kingston. Just about every time I drive through this stretch, I get to see a train. In mid-July, my family was on its way to the Hamilton area for a family reunion, which necessitated a jaunt down the highway. Since I was driving, my wife had the camera ready in case we saw something. She must have had a sixth sense for this behemoth of a train because no sooner had she taken out the camera when we saw a long string of tank cars bringing up the rear of this train.

For the sake of this blog post, I will start with the front end first, even though it was the last part of the train we saw. My wife snapped a few shots of the head end, including this shot of CN ES44DC 2326 and C44-9W 2596. Nothing out of the ordinary, right? Check out the flat car behind the locomotives.

I blew up one of the head-end images to show you what was behind the power, A CN flat car was loaded with axles. I was surprised when I looked closely at my wife's images to see that. You don't see that as a buffer car very often. 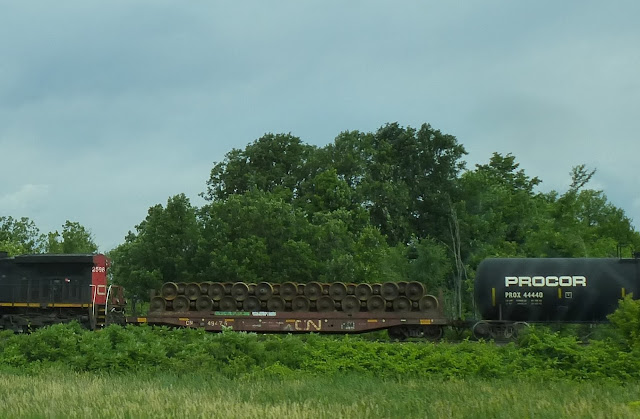 A little further back, there were a few CWR cars in the consist carrying rails west. It seems like an endless trend. Rails torn up in the east to feed new infrastructure in the west. I hope this wasn't the case here. 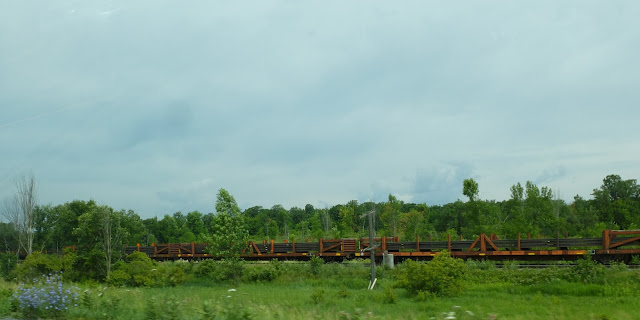 This train had a little bit of everything and it was not strictly organized in large blocks. This shot shows some of the variety in the consist, including an AOK boxcar, which we know belongs to a leasing company, even though the AOK patch suggests it is an Arkansas Oklahoma Railway car. Not so. You can read about my first encounter with AOK here.

As we overtook the train and made our way past it, I kept pointing out things that I hoped my wife could snap and, to her credit, she nailed just about everything, which is no small task along this stretch of the highway Although there are some points where the highway and railway parallel each other, there are lots of trees and contours to the road near Kingston that make photographs a little tricky in some spots. Here's a shot of some TTX autoracks. A little further up the consist, there was a great old Grand Trunk autorack, but the highway veered away from the right-of-way and we couldn't shoot it through a tangle of trees.

Here's another shot that shows you how this train was organized. Make no mistake, there is order on this train, even if it seems random to the untrained eye. Three loads of lumber trail a string of tank cars while AOK and CN ribbed boxcars follow.

This is where some of the shots became tricky. The highway veers away from the Kingston Sub a few times along this stretch of road east of Kingston. Here between the trees, we can see a few gondolas with covers. I would guess they are carrying steel. 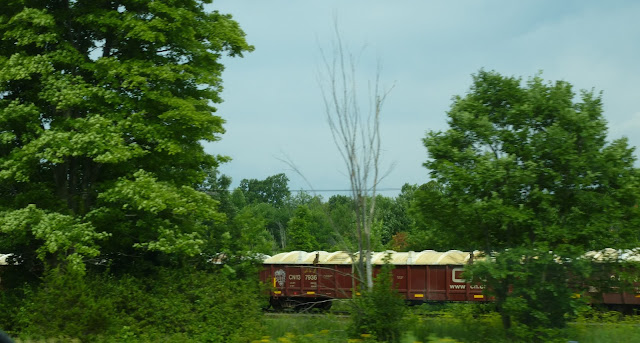 I can honestly say that my wife earned a strong A from me in her first real effort to photograph a train. Her efforts in trying to catch this DPU unit were solid, but I would dock her a bit for not catching the whole unit. Still, I was pleased she got what she did since this is the first time I have caught a DPU. Again, please see my above comments about living in Ottawa. There are so many elements of modern railroading that I never see in Ottawa. 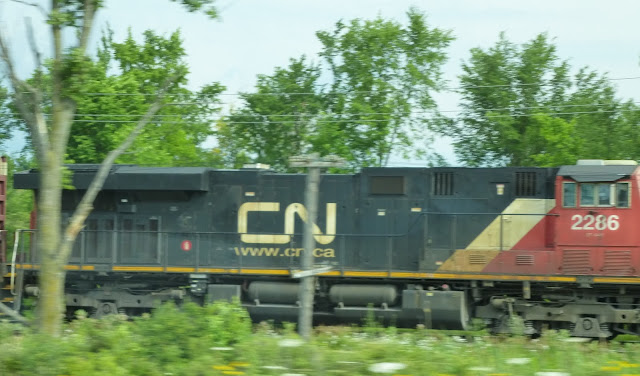 Toward the end of the train, we saw a long line of tank cars. I like this shot because it shows a contrast between a newer Procor tank car and an older rusting tank car. I also like the greenery in the shot. 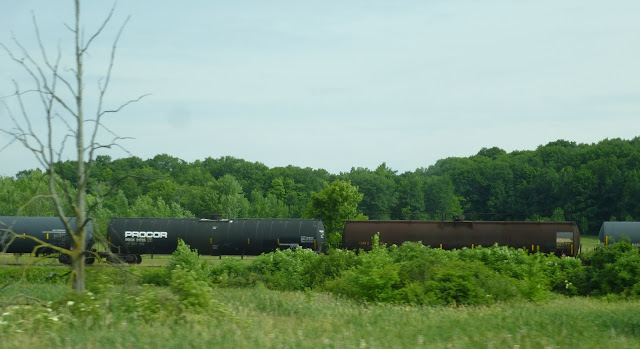 One final surprise. As we finally passed the freight train and headed on our way, I saw a Via Rail corridor train headed in the opposite direction (east, or to the right of the image). My wife managed to snag a shot of the passenger train passing the freight train. You can just make out the lead units of the freight train to the left of the image. I was driving at the time so I didn't realize that the Via train had a P42 at the end of the consist, which I haven't often seen. I'm pretty sure there was a P42 on the other end, but we sadly didn't catch that end in an image.

There are a number of other shots from this shoot, many of which feature blurry trees and other hazards between the highway and the tracks. I was happy my wife was able to have so much success in her debut as a railfan. Sadly, I don't think I've sold her on the hobby, though.

You can read about my previous efforts photographing trains on the 401 in these posts.

No such thing as too much of a good thing
Railway bridges of Ontario
So close and yet...

Kudos to your wife and her photography!

Those covered gondolas may be carrying some kind of ore concentrate. I saw them all the time between the Brunswick Mines and the smelter in New Brunswick, carrying zinc concentrate. Xstrata may be shipping some material to their smelter in New Brunswick now that their Sunbury smelter(s) are shut down, although I believe the majority of the smelter's raw materials come from Mexico and Peru.

The wheel car is interesting in that it's an older-style CN flat. Many have been replaced by 89-footers which can carry more axles between major CN car shops. The rail is new, and is also in 89-foot cars. Such cars used to be shipped from SYSCO. The TT autoracks are used to ship larger vehicles including Sprinters to prevent damage - formerly shipped on - flat cars.

Thanks for the additional information, Steve and Eric. I was particularly curious as to what was in the gondolas. Also, good to know that the rail is not being pried off any eastern right-of-way for once!

Well done!
I did Ottawa to Kingston and back Saturday (visiting plus I got a pair of tickets for a KP tour!!!) but sadly didn't have your luck. One of my favourite parts of the 401 is that stretch and railfanning on the road beside it (those outside of Ottawa reading your blog must thing we're all nuts!) too. I find that I am fairly unlucky in that I likely only see trains here maybe 40% of the time I am down that way which is probably about 5-10 times a year. Maybe I am as bad at catching trains as I am with fish....

Anyway, I managed to catch one to the west of the city along Bath however so I don't feel completely skunked this weekend.

Thanks for the comments, AJ. Sorry you didn't have better luck in Kingston. I was just driving through there a few weeks ago and was skunked, which is rare for me as my success rate there is around 50 per cent. Glad you got one near Bath. I would love to spend a day in Kingston just to catch a few trains. It's been a while since I've been there.

Hey you two, that's Bath Road. it leads to Bath (and to Glenora thence Picton) but starts in Kingston at Princess Street (former traffic circle - showing my age). It's also where I live/train watch, or at Kingston station. Either location will still be here when you make it to Kingston, Michael!

Alternatively, Joyceville Road, where the 401-parallelling starts westward, is a fine spot to be trackside!
http://tracksidetreasure.blogspot.ca/2014/08/summertime-at-joyceville-august-2014.html
Eric

The only thing I know about Bath is that it is where the Bathhouse is located, where the Tragically Hip recorded some of their legendary albums. I guess I need to get down there to Kingston!

Yeah, we used to visit the chip truck in Finkle Shore Park which is just across the highway from their studio. Also, Bath used to have the following installation:
Bath Water
Filtration Plant
is the way the sign read.
LOL
Eric

Thanks for the tip Eric!
Driving around there, I picked out a few spots that would be really interesting to railfan and I definitely will be coming back to try again in the near future (gf has family there which doesn't hurt with that!). Tried Kingston station a year ago in the winter and had some luck too as well as a spot on a dead end road towards Division street. Definitely a great city of railfanning.