Sometimes, it all comes together

In two recent posts, including this one, I shared some shots of Via Rail corridor trains on the Smiths Falls Subdivision. I have been trying to get some shots from different perspectives as a way to liven up an otherwise dull pursuit of nearly identical Via Rail corridor trains. One area I have been working with is McKenna Casey Drive beneath Highway 416. This is a tricky spot since the road has narrow shoulders. But I did find one stretch beneath the highway that has wider shoulders that allow you to pull over safely and get some interesting shots.

Recently, I parked right beneath the highway and was immediately struck by the interesting lines that the twin highway spans created over the railway. Also, unlike the area I have shot from a little west of this perspective, there were no trees to block my shot.

This image below is the end result where all the elements of a great photograph came together. I found the right location. I was fortunate enough to arrive just as this purple-blue cloud was passing over the area, which only added to the shot. Combine those colours with the buttercups in the field and you have the makings of a great railway photo. This shot below shows Via's Train 55 making its way west toward Moodie Drive, being pulled by a P42. I was thrilled with how this shot turned out. 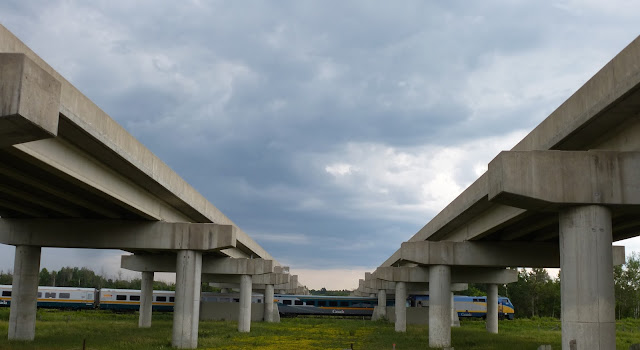 I'm not sure which shot I liked the best, because I really liked this shot too, since the train is not blocking the lines made by the highway spans. This is good example of the types of images I have been trying to get recently where the train isn't necessarily a huge element of the photograph, but is still striking nonetheless. 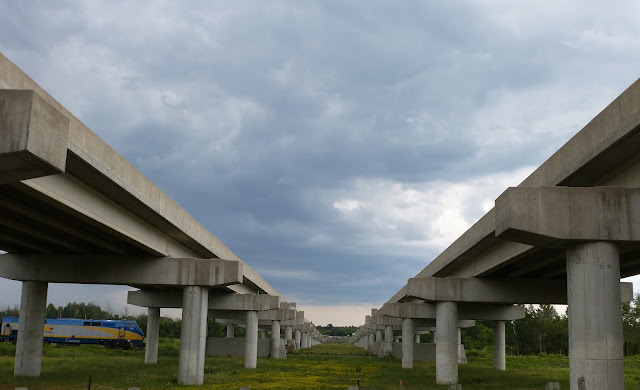 I also liked this shot below as Train 55 made its way out of the frame. The composition of the sky really made these shots better. 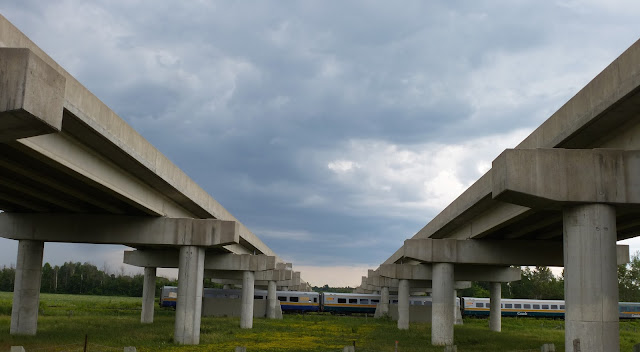 This meet with Train 55 completed my experiment with this area. I know now where I will take shots of trains in the area in the future. I've tried photographs from different angels, but I think this shot is by far the most dramatic.

I've mentioned this before but I've really think it's worthwhile to get photographs of trains where the train is not necessarily dominating the frame. Taking shots that showcase a train's immediate surroundings really do result in some compelling photos.
Posted by Michael at Thursday, July 21, 2016

I really like the second photo where the locos are approaching the centre. You get to see the vanishing lines of the bridges.

Nice photos and great idea. More and more I want to include the surroundings and make the train just a part of the scene rather than the sole object of the photo.

Thanks Steve. The more I look at the middle photo with the twin spans of the highway in full view, the more I like it.

Edd Fuller, blogger for The Trackside Photographer, in Trackside Treasure's sidebar, really believes on minimizing the train. Many former busy railroad locations (dare I mention Ottawa?) have lots of structures and viewpoints that are still very photographable. And his blog is all about that.
Eric

Here's a link to a YouTube video I recently posted showing many scenes along the Smiths Falls Subdivision: https://youtu.be/4JVBQpKG7s8

Thanks for the link, Dave. I'll be sure to feature it in an upcoming post. Some great local content, there!

I'm such an impatient son of a gun. Can either of you let me know the location of the spur at 1:00 of the video, and at another couple of times as well. Kott Lumber? Twin Elm?
Thanks in advance,
Eric

That spur is for a grain elevator at Twin Elm.

On Google view, look for the SynAgri facility on Twin Elm Road, although that crossing is Cambrian Road.

Thanks, Dave and Michael. I don't know the area that well, though I have learned much from reading The Beachburg Sub and the discussions of the Ottawa interest group Michael is forming through this blog!!
Eric