Twin Elm: The gift that keeps on giving

As I was sorting through some recent shots I took at the Twin Elm Road crossing, I remembered that there was a previous photo taken at that very crossing from 1980. This shot illustrates how little has changed in this rural area of Ottawa. The surrounding farms today are pretty much what they were when this shot was taken. The right-of-way hasn't changed much, except for some new signaling equipment that was recently installed.

What strikes me about this shot is that the crossing sign is missing, to say nothing of crossing gates that are essential on high-speed corridors today. This consist, led by an Alco FPA4 6793, features four of the classic blue and yellow cars (photo from the Canada Science and Technology Museum archives). Now contrast this shot with the shot below, which I took Jan 29. 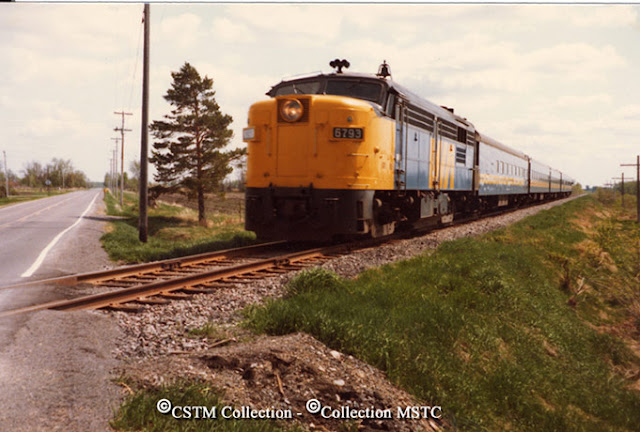 My shot shows Train 42, led by F40PH-2, approaching the Twin Elm Road crossing. The poles alongside the tracks are now gone and a crossing signal and barrier are in place, but there is little else that is all that different from the top shot.

I was quite happy with how this hot turned out, given the composition of the sky and the resulting colours that are prominent at this time of day. 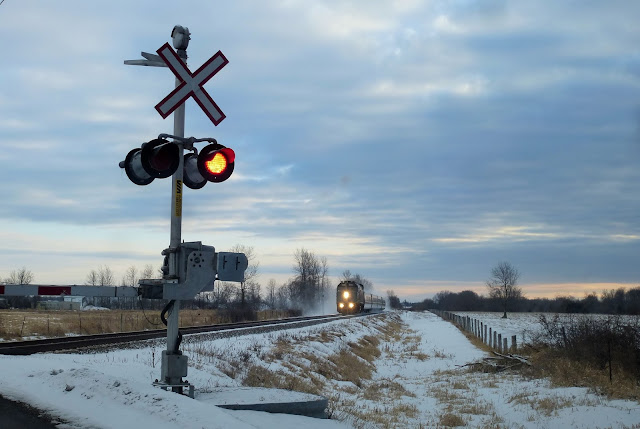 Here's a closer shot of the consist as it speeds by my car. Just like the top photo, the consists remain four cars long for the most part. It's fascinating to see how little has changed along this subdivision. 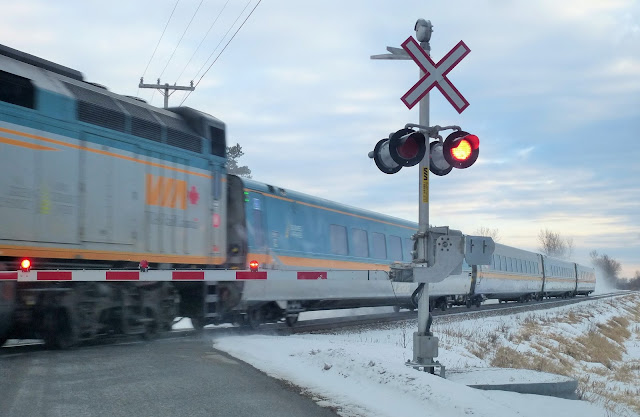 This area has given me some of my best photos of late. I would highly recommend any local railfans to explore this area. There are stretches of Twin Elm Road where you have an unobstructed view of the Smiths Falls subdivision. When a train makes its way through this area, you are able to shoot the entire consist. Closer to the crossing, you are able to get some pretty dramatic angles in your shot. It also should be noted that you have the opportunity to shoot at Cambrian Road, Barnsdale Road and Eagleson Road crossings, all of which are less than five minutes from this crossing. You are even able to catch the bi-weekly CN on Tuesdays and Sundays (schedule has changed of late).
This is an area worth checking out.﻿
Posted by Michael at Thursday, March 24, 2016
Email ThisBlogThis!Share to TwitterShare to FacebookShare to Pinterest
Labels: F40PH-2, Nepean, Ottawa, passenger trains, railfanning, railways, Smiths Falls Subdivision, Twin Elm Ontario, Via Rail

Nice post, Michael. I always enjoy these Then and Now comparisons of various locations. Unfortunately, VIA trains at Kingston are much shorter than in the 80s, when we would have combined Ottawa-Toronto and Montreal-Toronto consists on some trains.

It was a happy accident when I saw that old photo and compared it with a shot I had taken. I was surprised to see that the length of the trains hasn't changed much over the years. I'd have thought the consists would have been longer in the 1980s. Thanks for your comment.

Hey I thought you'd find this interesting. I found this plugging a pothole in a Barrhaven parking lot http://imgur.com/PDWVPMp