Gone but not forgotten: The Forest Subdivision

Some cities bury old rail lines and their rail history. I won't write about how this came back to haunt Ottawa. Instead, I want to focus on a historic rail line, long gone, which is celebrated in southwestern Ontario.

The old Canadian National Forest Subdivision has an interesting history. At one point, it was the Grand Trunk Railway's main line between Point Edward (Sarnia) and Toronto. The line was opened for business in 1859 before standard gauge was adopted among North American railways. The rails were 5 feet, 6 inches apart (1.67 metres), before being changed to the standard 4 feet, 8 1/2 inches (1.435 metres) in 1872.

The rail line initially ran down what is now Cathcart Boulevard in the city and crossed through the lakefront park, Canatara Park, before ending at a terminal in Point Edward where the Bluewater Bridge now stands. The right-of-way between Blackwell, via Cathcart Boulevard, and Point Edward, saw scheduled service until 1967. That stretch is now unrecognizable. However, the old right-of-way that branched off south at Blackwell that connected to the Strathroy Subdivision has been maintained as a multi-use trail.

The image below is a small monument to Sarnia's railway heritage. A small railway platform sits near what was once the Blackwell flag stop. This flag stop served passengers until passenger service was discontinued by CNR in 1952. This area is located in north Sarnia. You will notice that the platform has some actual rails incorporated into it. Nice touch. 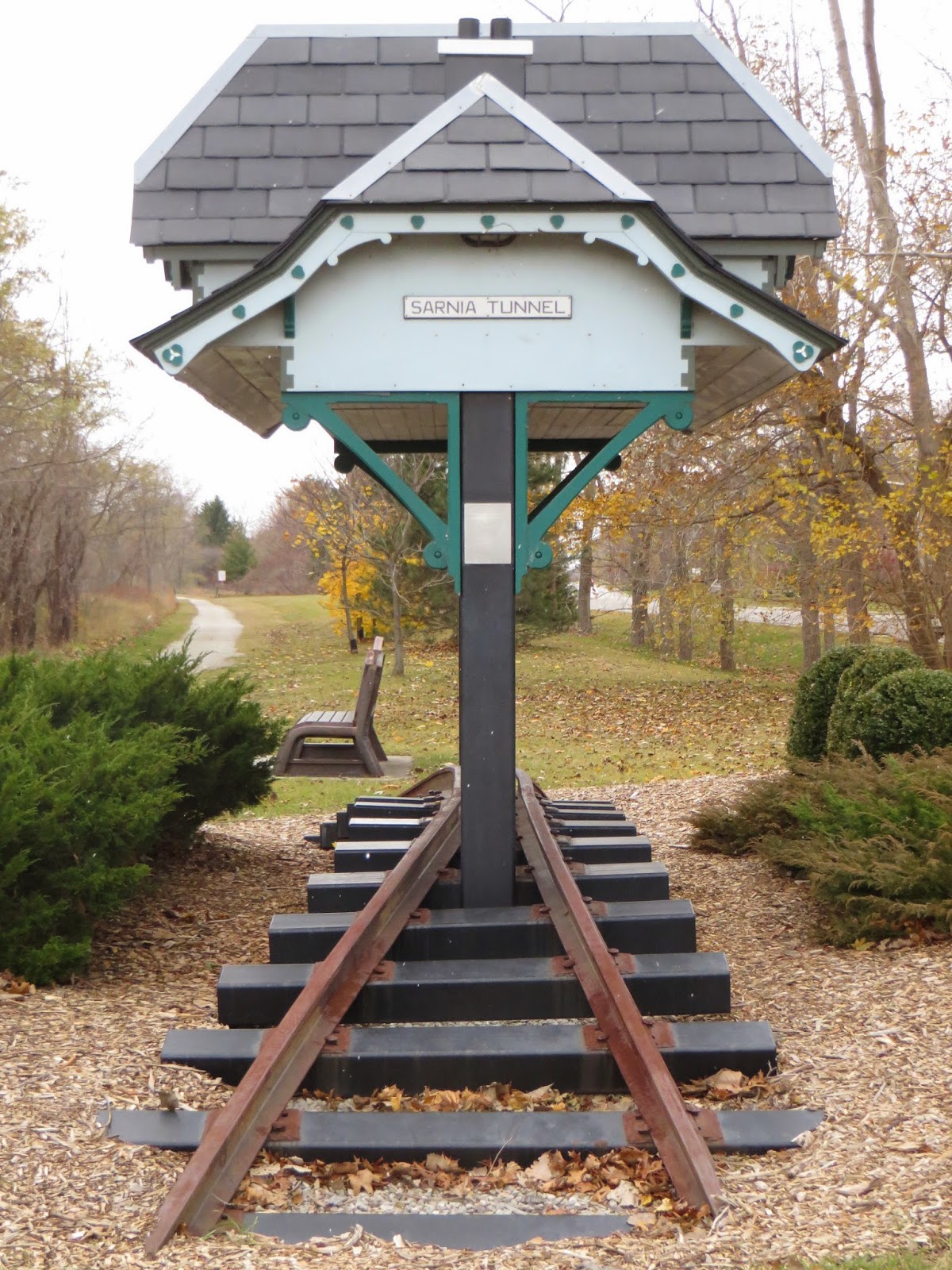 Also, a bench made with old railway iron. Again, a clever nod to the area's railway past. I'd love to know how they bent those old rails for this use. 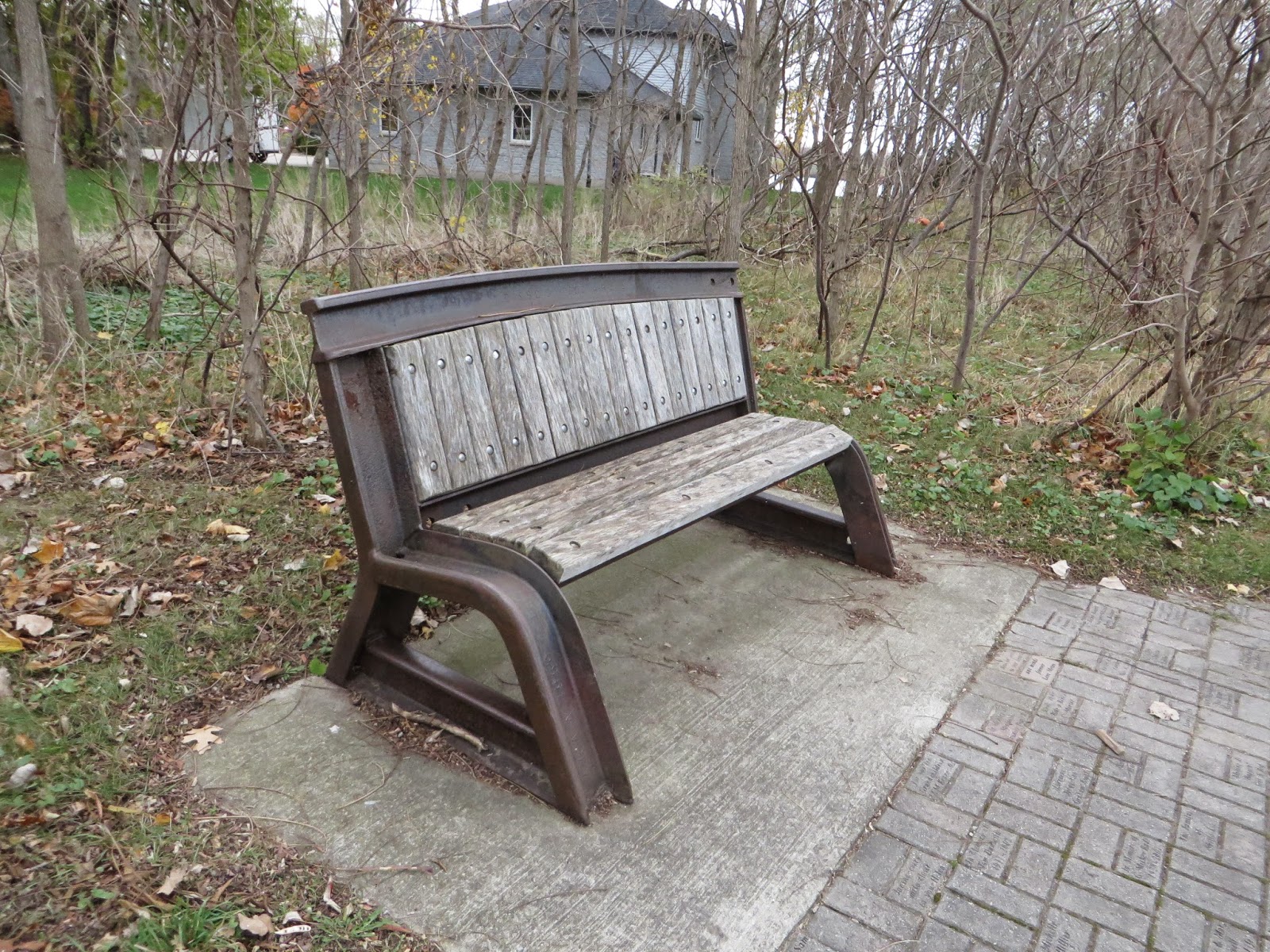 The old line has more recently been known as the Howard Watson Nature Trail. It seems to be an incredibly popular trail for people to use. The trail itself runs between Sarnia and Camlachie, a small village north of the city. The photo below (all shots in this post are courtesy of my brother Marc) shows the old right of way, which parallels Lakeshore Road in Bright's Grove. You can make out an old railway bridge straight ahead. 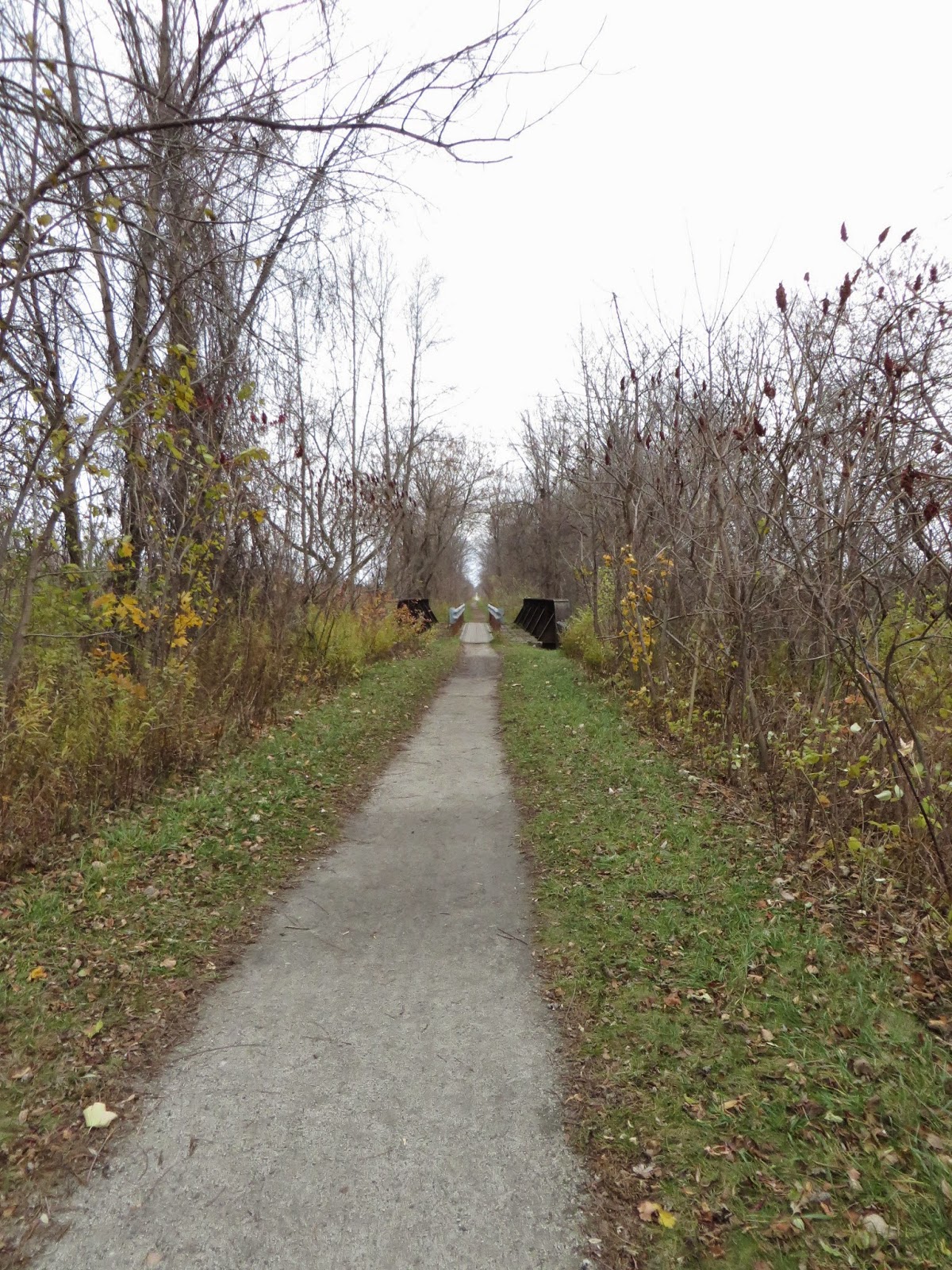 Here's another shot. The bridge crosses Perch Creek, also a flag stop on the old Grand Trunk line in earlier times. As you can see, the trail is well maintained. 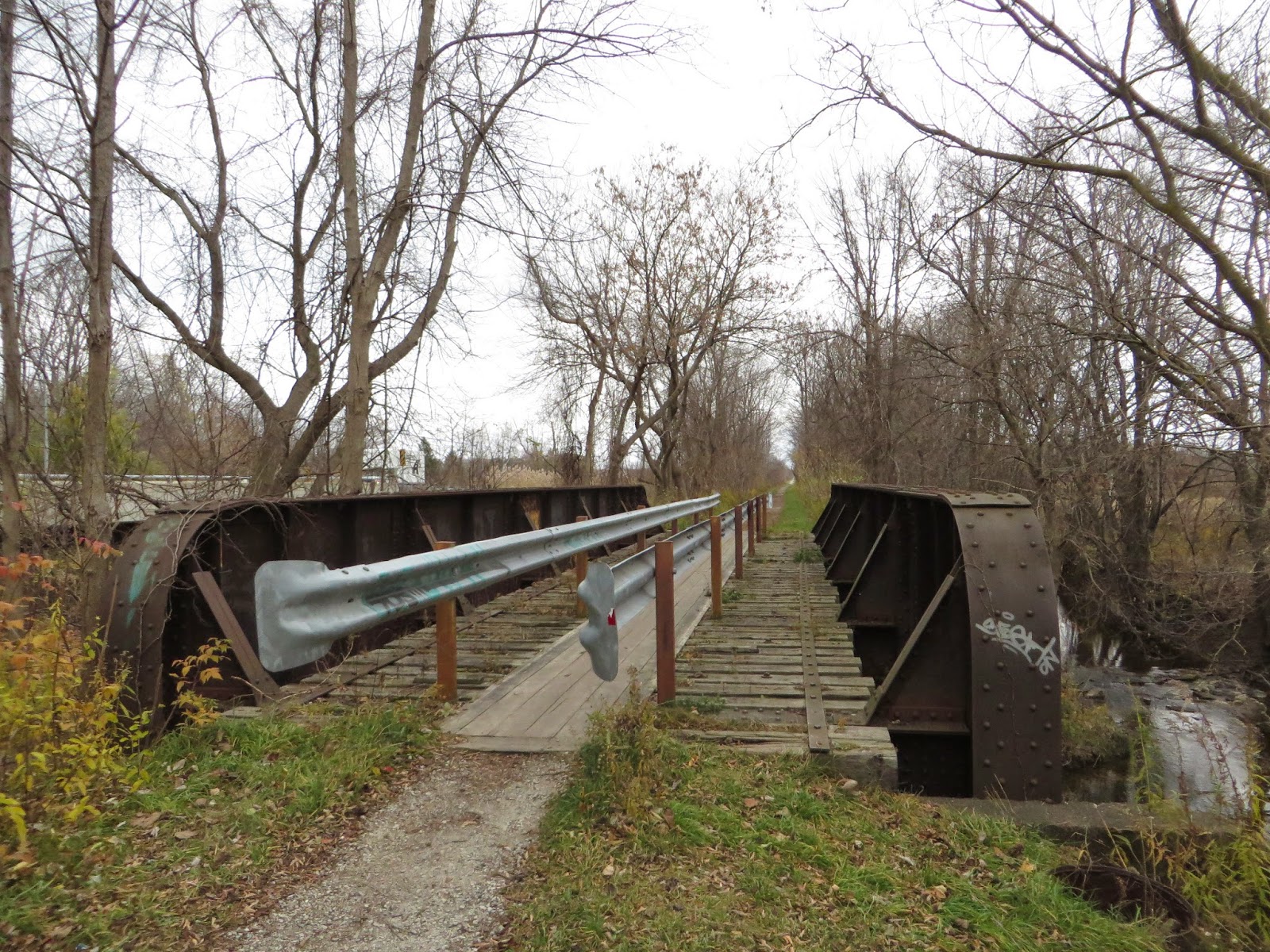 Another shot from the woods. 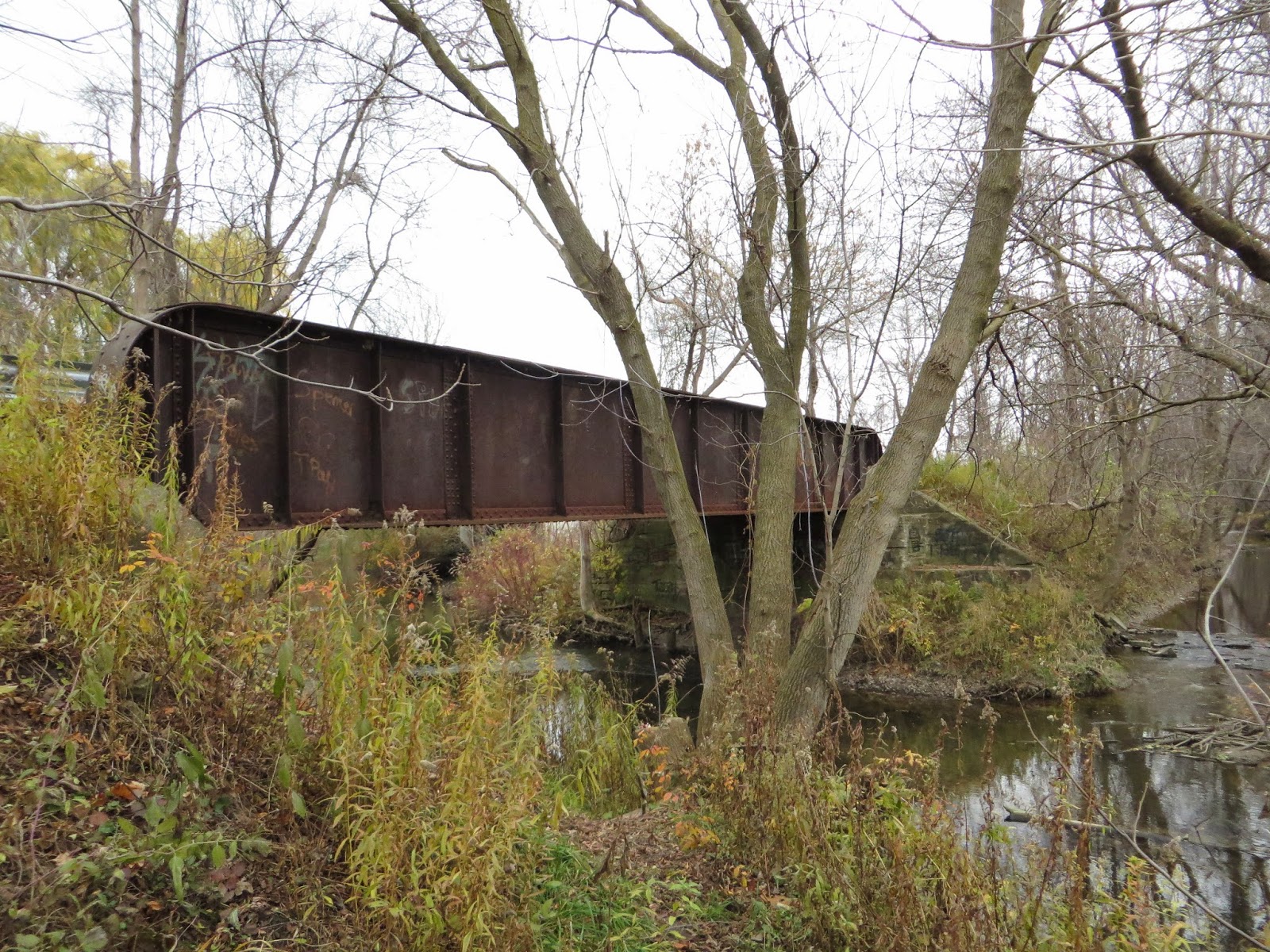 And another shot from below. I'm not sure what the "Pig Roasters" graffiti is about, but I have an idea that it's likely a shot at local police. Not terribly clever. Given the tricky lighting beneath this bridge, I did a fair bit of touching up to make sure all elements of were visible. That explains the sepia tones you might notice. 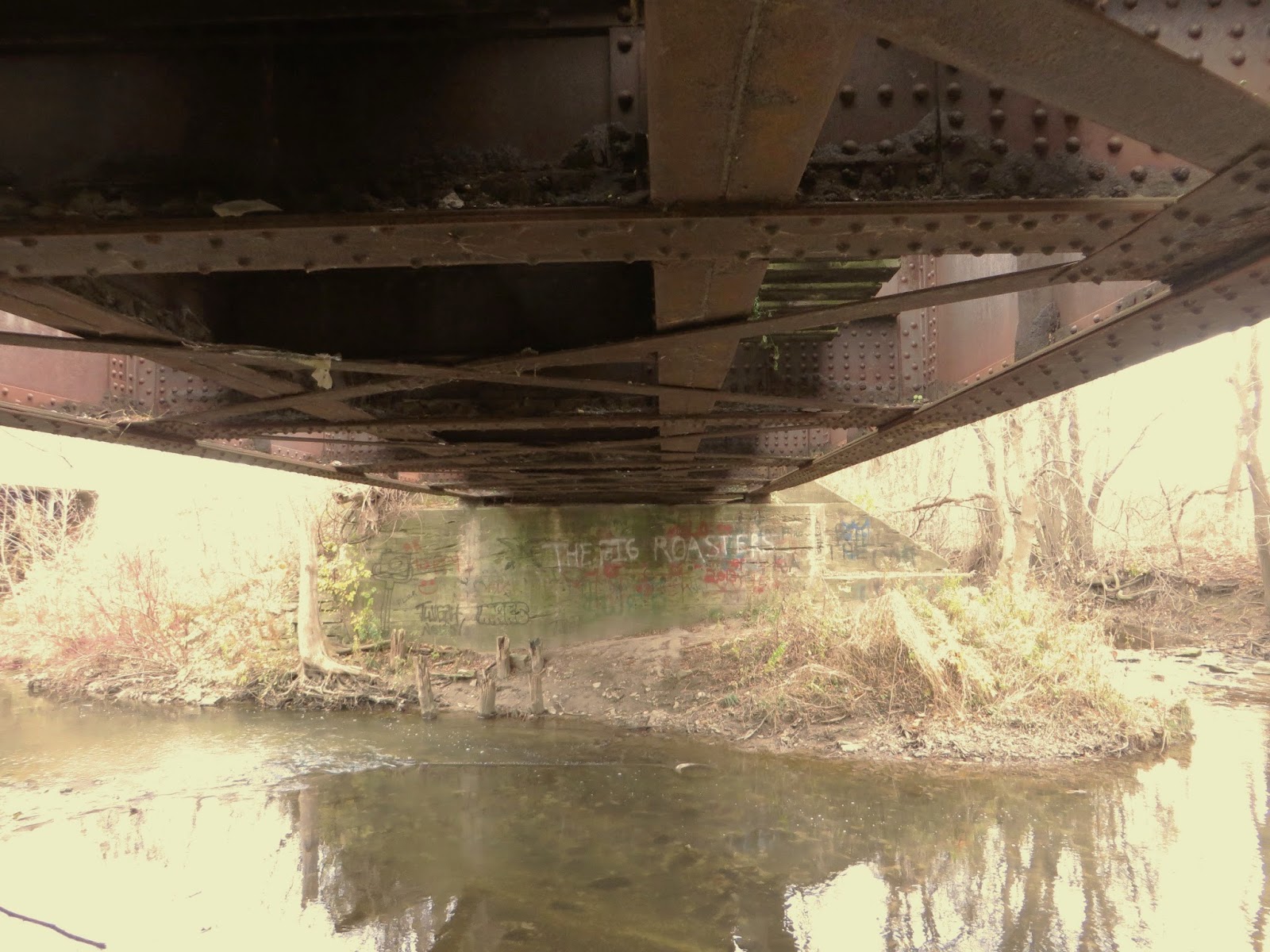 As I was reading about this line, I discovered a number of interesting tidbits.

2. The connection also cleared the way for the GTR to divert its traffic to the St. Clair River Tunnel, in south Sarnia, in 1891. Before the tunnel was built, the Grand Trunk ferried 1,000 cars a day across the St. Clair River, by two ferries.

3. The line once served as a major transportation route for sugar beets, which were loaded onto freight cars in the north end of the city.

4. The GTR's old terminal in Point Edward once served as a the second busiest immigration hub for people wanting to settle in the American West. This hub was second only to Ellis Island for the number of people it processed.

CN took control of this old GTR line in 1923 when the Grand Trunk was folded into the Canadian National Railways crown corporation. As mentioned, passenger service on this line was scrapped in 1952. The CN Forest Subdivision in the Sarnia area was abandoned in 1981, with other segments following in the late 1980s.

When it was last fully operational, the subdivision began at Sarnia Yard and ventured east where it served the following towns:

As mentioned, a part of the line in Sarnia has served as an official trail since 1986. There is a portion that crosses under Highway 402, which is being eyed as a right-of-way for a road. Those who love this trail are opposed to the idea, but suggestions have been made where the road would be built with a dedicated right-of-way for the trail. I'm sure this is not a great option for those who love this trail, but it seems inevitable that a strategic right-of-way will surely give way to development.
Posted by Michael at Thursday, January 21, 2016
Email ThisBlogThis!Share to TwitterShare to FacebookShare to Pinterest
Labels: CN, Forest Ontario, Grand Trunk, Great Western, history, Point Edward Ontario, railway, Sarnia, St. Mary's Ontario, Strathroy Subdivision

Sorry for the offtopic comment but I wanted to get in touch with you regarding the CPR Prince of Wales bridge in downtown Ottawa and I couldn't find your email address here.

Just thought you'd like to know. Thanks for the great posts!
(please feel free to delete this comment as unrelated and/or to contact me via email)

Please disregard my last comment. It is the transitway bridge OVER the tracks at Bayview station which is being demolished. Thanks again for sharing your writing and photos!

It's okay Grant. Thanks for commenting and keeping an eye out for railway happenings in Ottawa.