The photo below, taken last spring, us now a historic relic. Nepean Junction, a point on the CN network that once brought together its transcontinental main line with its former Renfrew Subdivision, is now gone. The turnout you see below has recently been replaced with the second photo down.

Read last year's posts about the final days of the Beachburg Subdivision north of Nepean Junction here and here. 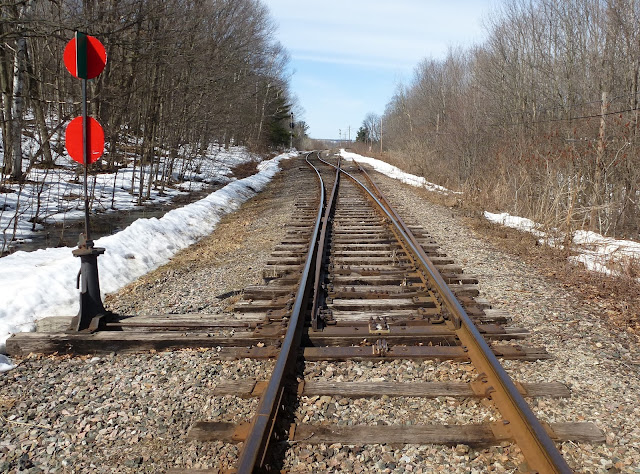 It's tough to see in this photo since I was shooting into the blazing sun, but you can clearly see by the two long ties near the bottom of the image, the switch has been replaced by a continuous link to the Renfrew spur. 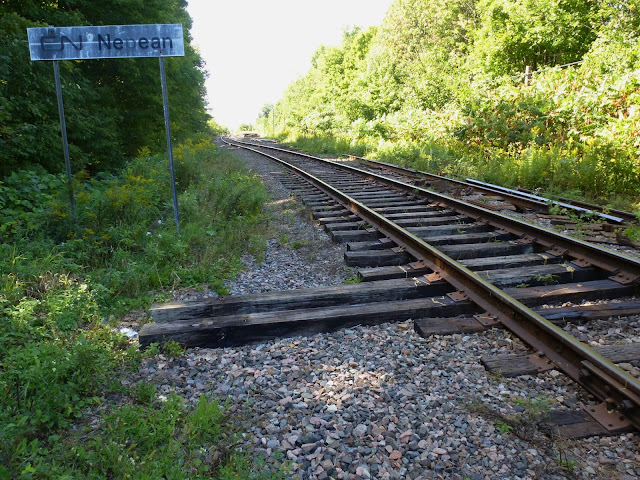 Here's another shot of the turnout last April. Even then, it was apparent that Beachburg northwest of this junction was doomed. The rails were covered with snow and not maintained while the Renfrew Spur was in reasonable shape. The shot below is looking south. You can see that the switch was already permanently aligned to accommodate the Renfrew spur. 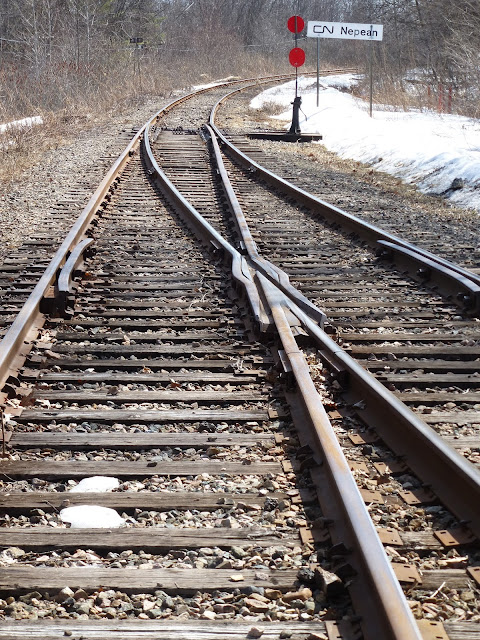 And this is the site on Sept. 4. Remnants of the transcontinental line are still in place, although I would imagine CN may run a work train out here at some point to collect what's left. Given that Nepean Junction isn't accessible by road, it would be tough to get the rest of the rail out of this area. You can see the CN sign in the shade. It used to signify a junction but now it's just a place name on the CN map. 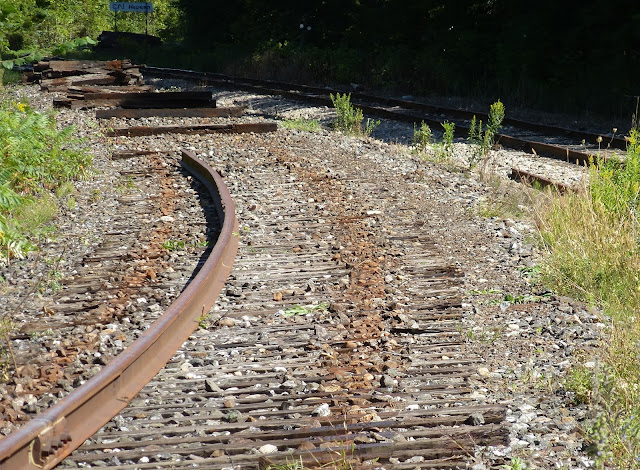 This begs the question in my mind, what now for the Renfrew Spur? The shot below shows that the spur is now the main. There is no turnout, just a curious curve on the line. My guess is that the Renfrew Spur moniker will remain. This is because the rails west of that Nepean sign are owned by the city and maintained by Nylene Canada, a CN customer at the end of the tracks in Arnprior. This plant requires one train a week to deliver raw materials to the facility. You can read more about this weekly train here and here. 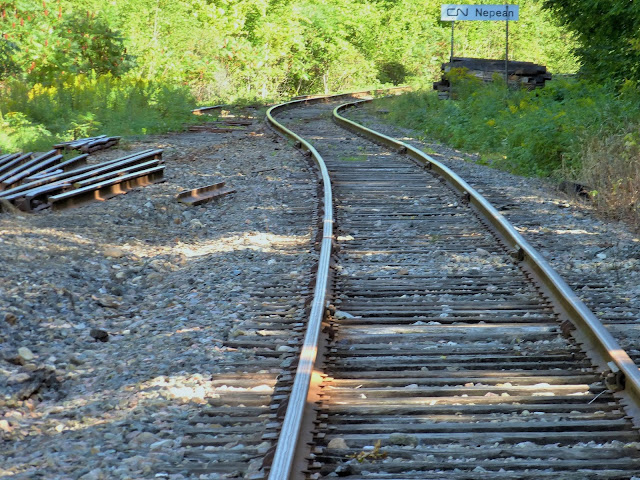 As you head northwest on the old Beachburg Sub, this is what you will see. This is not the world's narrowest gauge railway. This is the end result of a dismantled railway track. I found this image amusing. It was a little bit of levity. 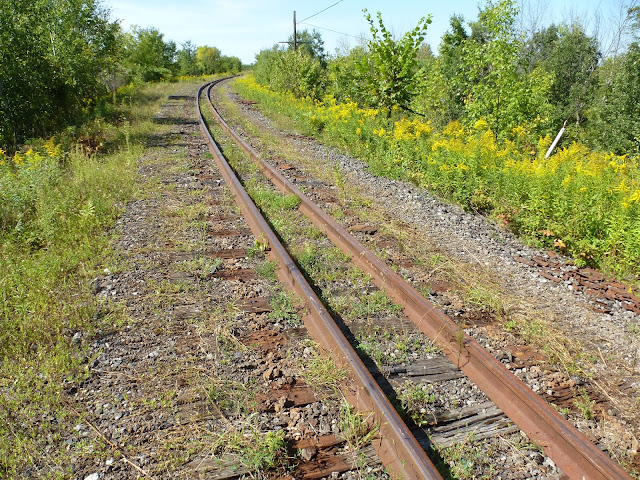 This also was pretty cool. As I walked alongside the track (it is still private property), I saw this family of deer having an afternoon snack. They didn't pay much attention to me until I got closer. Still, it was cool to see the local wildlife. I also came across a small garter snake, which was surprising. It was the first snake I have seen in Ottawa in ages. Makes me wonder why snakes bother to live this far north in the first place. 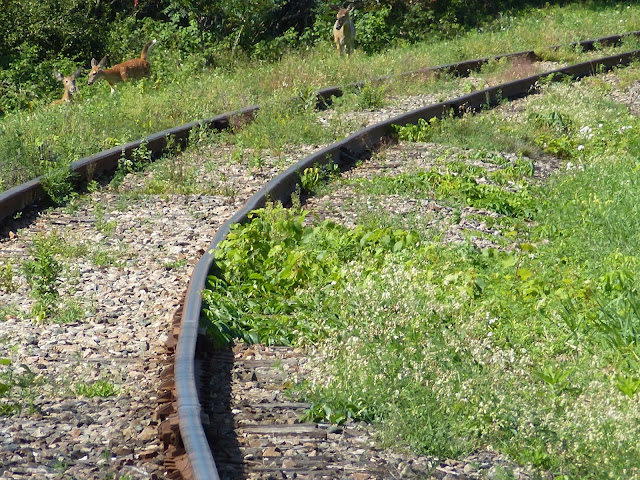 So, that closes the book on this rail line. You will notice that I have refrained from ranting about this line not being purchased by the city for commuter purposes. After all, a stretch into north Kanata was still in place until very recently. I have said my piece and am ready to move on.
I have to thank fellow blogger Eric Gagnon of Trackside Treasure for passing along an email from a local rail watcher, who found out about this work going on, which inspired me to pay one last visit to the old junction.
I should mention that I had three other titles in mind for this post, which I rejected.
Don't call it a junction: Nepean Junction scrapped
From Junction to junk: Nepean Junction scrapped
Junction no more: It's just Nepean now.
Can you pick out the LL Cool J reference?﻿
Posted by Michael at Thursday, September 10, 2015
Email ThisBlogThis!Share to TwitterShare to FacebookShare to Pinterest
Labels: abandonment, Beachburg Subdivision, Canadian National, CN, Nepean Junction, Nylene Canada, Ottawa, railways, Renfrew Spur

Looks like I was wrong. I was thinking that they may leave it there as a storage spur, kinda like the Carleton Place Sub running from Robertson to Moodie. They used to store tanker cars on the spur there, but I've not seen any cars stored there for quite sometime.

I've not visited the junction since May 2007, attached is the image of it from that visit:
https://www.flickr.com/photos/dwmccorm/506442748

Nice pic Dave! Ah the 'Good' Ol Days, when the Beachburg sub was still in use. Great post as always, Michael. Nepean Junction certainly deserves a goodbye of this caliber. You don't realize how sad it is to see until you actually see it ripped up. Let's just hope there will be better days to come for rail in Ottawa!

I'm glad I have a shot like the one you took. Dave. It's a reminder of history now. I have a funny feeling the old Carleton Place stub spur might be removed soon too, folks. Thanks for your comments.

Since the Beachburg Sub no longer goes through or anywhere near Beachburg while the Renfrew Spur doesn't get as far as Renfrew, and the two are now de facto one rail line, perhaps they should rename both to something else.

Like, say, the Ottawa Sub or the Arnprior Sub.

The way things are going, what's left of the Beachburg west of Federal might as well just be handed over to the City of Ottawa on the same terms as the Renfrew Spur, especially since the next LRT yard will be placed alongside it east of Woodroffe Avenue. There's certainly no great reason for CN to maintain ownership of anything west of the Rideau River.


There are still bits and pieces of track of the Beachburg Sub lying around at various road crossings in West Carleton ward awaiting removal, plus the bridge over the Ottawa River still has rails on it.

I wonder how long the overpass at Carling will last: it's a nasty narrow underpass for Carling with a dip in the road. I'm sure the City would love to see that structure disappear completely.

All interesting points David. I have been wondering what will happen to the naming of the trackage, but something tells me that nothing will change. CN clearly does not place much importance on its operations here. Most people here think the railway only returned to the city and bought out the Ottawa Central because CN wanted the rails on the Beachburg Sub north of Nepean Junction. You are right that large stretches of rail remain in place throughout West Carleton. As for the city buying the tracks west of Federal, it's an interesting idea, but the city seems dead set on its own light rail route in the west end. They have not shown much interest (if any) on retaining existing rails and using them for their commuter network. That's my take, anyway. Thanks for your comment.

I too will refrain, from making an obligatory snake joke referencing Parliament Hill!

Not seriously, I liked the n.gauge joke. What's that, 15-inch gauge?

Definitely sad, and of course short sighted, but as noted already, the city seems to be pretty set on having it's own route, despite the obvious fact that it already had a line through a reasonable densly populated area, and could have kept it that way. Wouldn't it have made sense to keep the Carleton Place sub open, at least as far as Stittsville. Imagine the number of commuters who would have been able to use it.

As for why CN bought the OCR, I think it was actually part of a package and was just included in the deal. I doubt they really had any interest in it whatsoever, as they mothballed the line practically since the moment they took possession of it. In addition, the abandonment of CP's Chalk River sub probably doomed the Beachburg even further, as it was an interchange as far as I know.

It's so galling in light of the CP abandonments of what Ottawa Central might have become had it not be acquired by CN. Ottawa Central could have been operating all the way to Mattawa or even North Bay.

My point about the City acquiring the tracks was not about operating any kind of rail service but rather that CN might just want to be rid of the liability of paying taxes on something it really doesn't want. The arrangement in place from Nepean Junction to Arnprior is far better for CN than for Federal to Nepean: CN pays taxes on the latter but none on the former since the land is owned by the City and the tracks by Nylene. If CN could extend that arrangement to Federal, that would be so much the better for it.

Also the City would have reason to acquire everything at least as far as Woodroffe Ave, just so it can serve its future LRT yard by rail.

I agree with all your points, David. It would make more sense for CN to be rid of the liability of owning tracks west of Federal on the Beachburg right of way, but the city likely doesn't see much benefit to it right now. I would assume if they were pushed into a corner, they might consider it, provided Nylene Canada assumes all the operating liabilities on the line, since they are the only reason those tracks are still in place today. As for the Ottawa Central, I would imagine that what CN has done locally will prevent any shortline operator from looking at this area as a viable business opportunity. OCR served Portage du Fort QC and had prospects there as well as in Renfrew County. When OCR's president James Allen attempted to buy back Beachburg a few years ago, those prospects were waiting for a rail option, but the deal was never close to being closed and CN shut the door on any future economic development along the line by removing it.

Thanks to Eric and Keith for your comments as well. Keith's point about the Chalk River Sub is a good one. When the OVR stopped service on that right of way (which is rented from CP), that was pretty much it for rail in that part of the Ottawa Valley.

I'm enjoying your blog! I miss my days back in the late 80s and early 90s when I lived in Ottawa. There is infinitely more VIA Rail action there than here in Calgary.

By the way, the world's largest natural collection of snakes is north of Ottawa, in Manitoba. You can find out all about it here: