RMEO Part I: The not-so-little engine that could, CP's S3

This is the first in a series of posts detailing the artifacts on display at the Railway Museum of Eastern Ontario in Smiths Falls.

As I recently mentioned in my first Smiths Falls post, I visited the Railway Museum of Eastern Ontario in late July. The museum has a surprisingly large and diverse collection of rolling stock from various eras of railroading. The museum also has two locomotives on display, a CN steam engine and a Montreal Locomotive Works S3 switcher 6591 (ex-CP).

This diesel locomotive, which the museum lists as weighing 99 tons, often roamed the Smiths Falls freight yard and other parts of Eastern Ontario as a switcher until it was retired in 1982. The unit was then donated to the museum three years later. The engine has been restored and operated since that time. In fact, a volunteer at the museum told me they recently operated the S3 for some switching duties on the museum's tracks.

The shot below was taken from the platform of the museum's restored Canadian Northern (later Canadian National) station. So, had you been waiting for a train at this station in the past, this is the view you would get when an engine passed by, although it would be an unlikely site to see this CP unit on CN tracks. 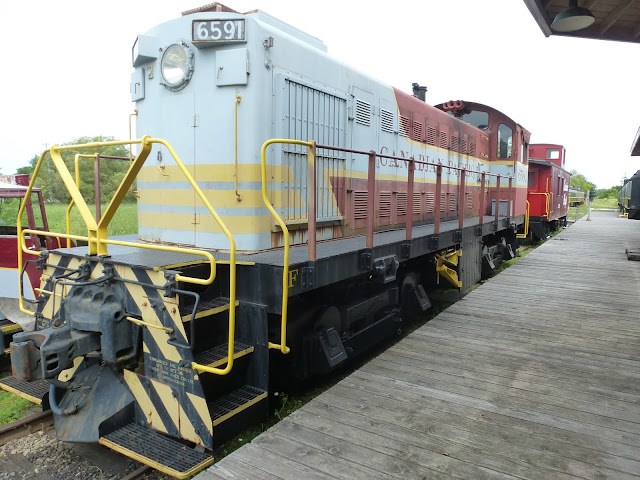 This locomotive absolutely exudes first generation diesel. This model was built starting in 1957 in Montreal (earlier models were built by Alco in the United States). It's bulky compared to the more common switcher of choice in recent decades, the SW1200.

One might think that a switcher this big would have horsepower to burn, but the S3 only had 660 horses under its hood, compared to 1200 for the SW1200. For this reason and others, this locomotive and its sibling, the S1 were not the runaway success that Alco had hoped they would be.

Only 292 of these switchers were built by Alco and only 163 built by MLW. But, despite its shortcomings, 101 were purchased by CP while CN rostered 49. 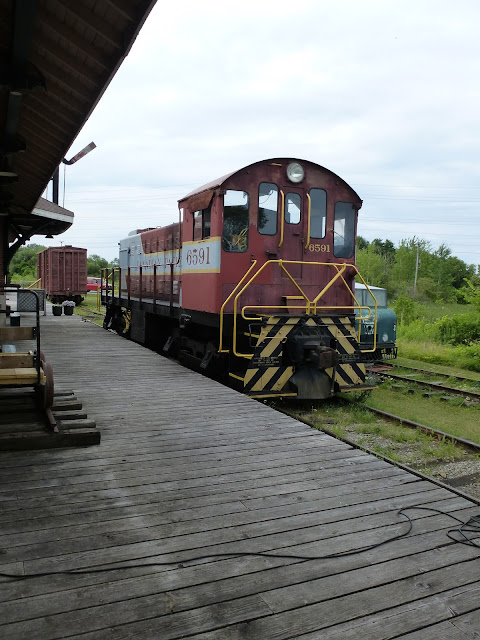 This unit, as you can see above, is a centrepiece of the rail museum's collection, which is why it's the first thing you see after you emerge from the reception area onto the grounds. 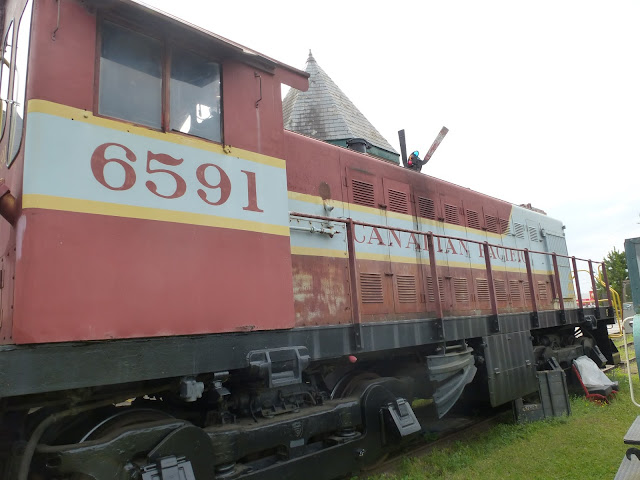 I was able to walk around the unit and get a shot from the other side. As you can see, a number of Eastern Ontario winters have been less than kind to the locomotive's maroon, grey and gold livery. (here's a shot of the locomotive in action red in 1977 in Brockville) But its undercarriage and its trucks seem to be in great operating shape. You can just make out a piece of the station's original semaphore signal above the hood. 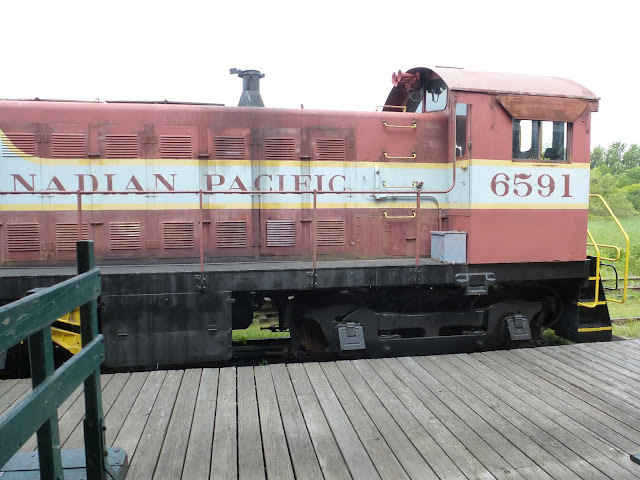 This shot shows you (again) the condition of the paint and the trucks. I took this shot from inside the doors of the station. You can see a small piece of an antique luggage cart to the left. Getting a wide shot of this unit was impossible, given the sightlines.
It should be noted that this locomotive is one of three that are either preserved or operating in Canada. Another S3 (with the Canadian Pacific cursive logo) is on display at the Saskatchewan Railway Museum while another has been refurbished by the Waterloo Central Railway, where it is now pulling excursion trains on the tourist line to St. Jacobs. The switcher in Waterloo has an Ottawa connection as it was housed at the National Research Council's railway facilities near the Ottawa International Airport. In 2012, the NRC sold the unit to the WCR, which has retained the old CP action red scheme for the most part (see Waterloo Central link above).
﻿
Posted by Michael at Thursday, August 13, 2015

Good to know there is another one preserved. Thanks for the info, Steve. I would highly recommend this town to any serious railfan. Well worth it.

Plus one in Saskatchewan, plus one north of Superior.

We used to swing by the Hershey Plant for some sweet treats. I don't need their current product.

Thanks for sharing your visit, Michael.
Eric

You mention that the superstructure paint is weathering and the frame and trucks look fine. This is indeed so even today because the volunteer painters were prohibited from hand painting from the frame up by the management as the plan is to have it professionally sprayed by a contractor. That was two & a half years ago...