The weather is finally beginning to turn here in Ottawa. After weeks away from train watching, I was finally able to head out this past weekend, along with my daughter, who insisted on coming to see trains with me. So, we made our way out to the Moodie Drive crossing to catch the morning Via corridor train followed (hopefully) by CN 589. We were late getting to the crossing, so we just barely caught this four car consist. 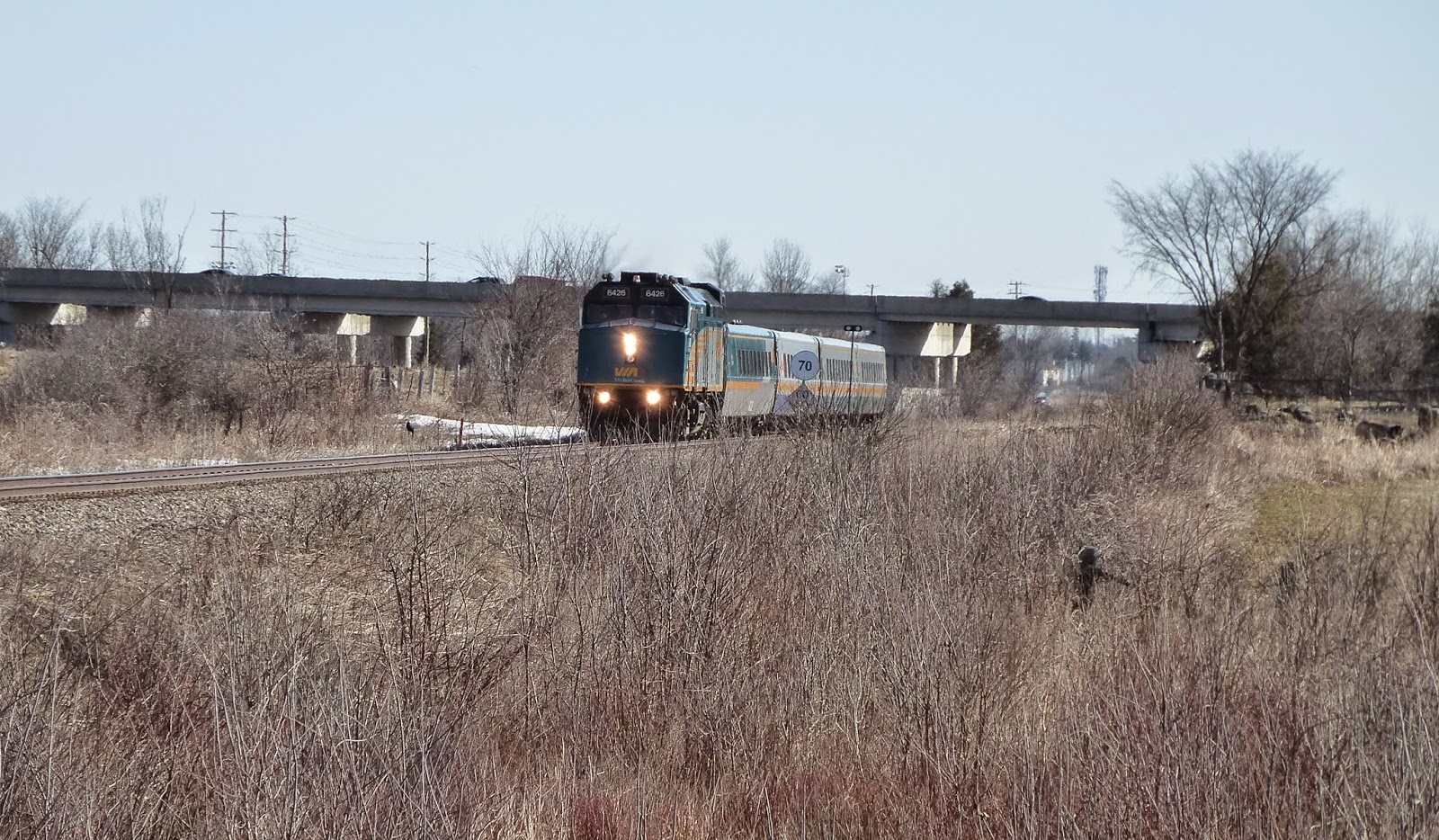 This is a pretty typical consist for Via these days, with the standard LRC coaches alongside refurbished counterparts in renaissance colours. My daughter was thrilled with this train, but was disappointed that there was no other trains due. Unfortunately, CN 589 had already done its rounds earlier, as evidenced by a loaded lumber car already sitting on the Kott Lumber spur. 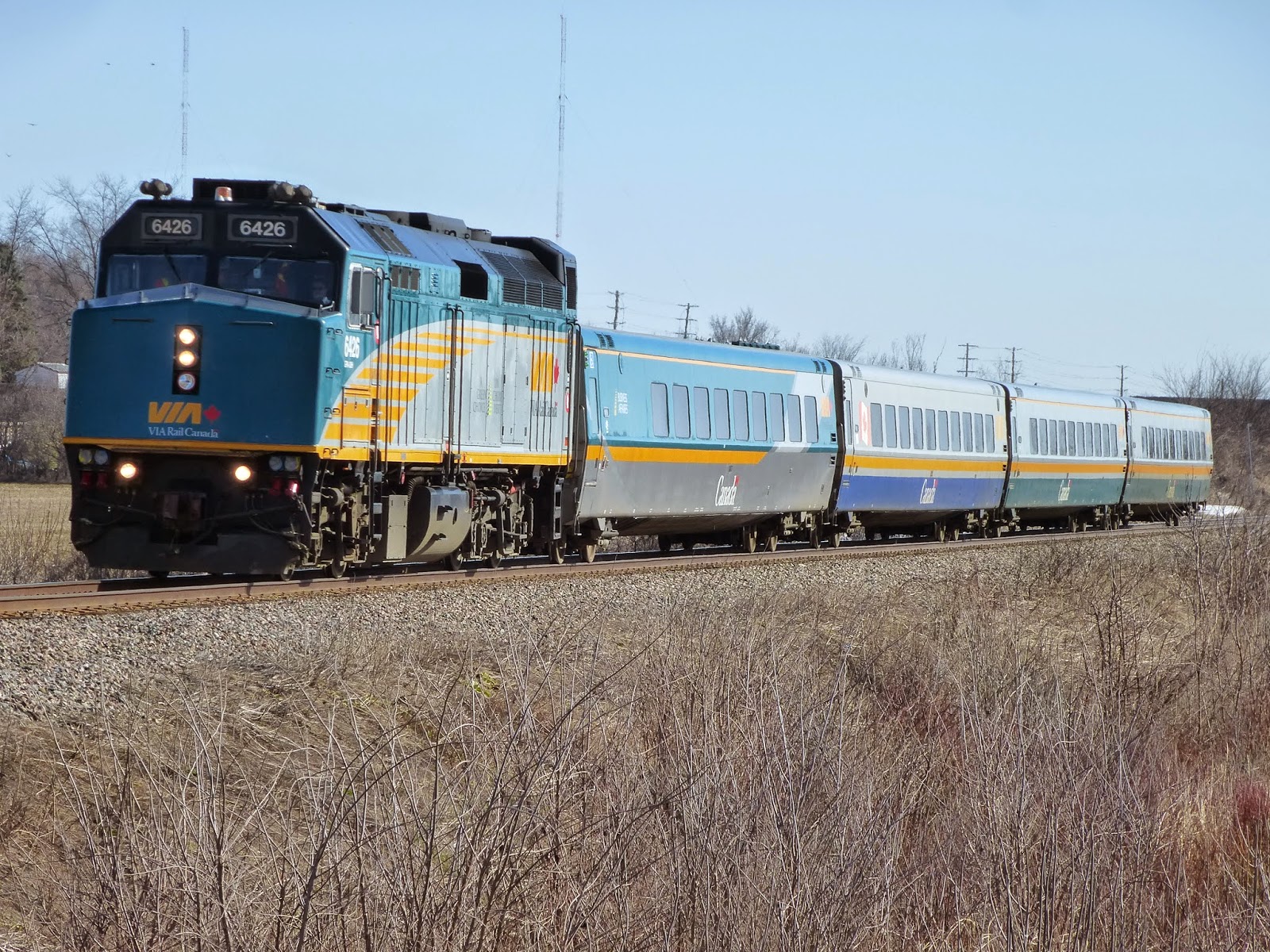 ﻿
This past week, I decided to take the O-Train all the way south to Greenboro Station on a lunch break. I made a quick trip to Bank Street where I took some shots of the Walkley Diamond. It's actually a half diamond, but it still presents an interesting view from the Bank Street overpass. This is the view looking west. The line heading west is the CN Beachburg Sub, which now officially ends at Nepean Junction (although trackage west of this junction is still in place to Kanata North). The north-south track is the O-Train Trillium Line (officially the Capital Railway Ellwood Sub). 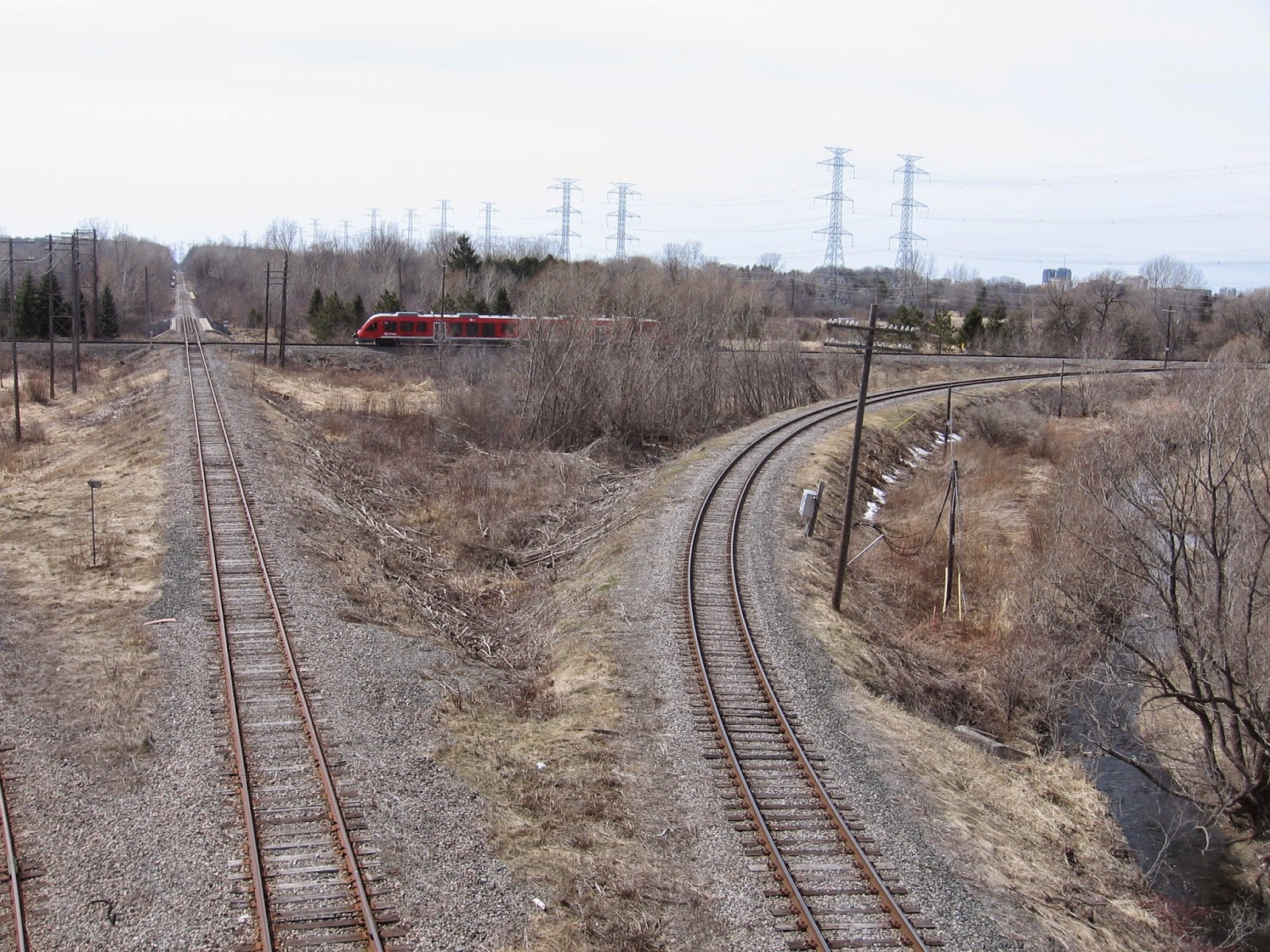 After an O-Train passed, I made sure to take a wide angle shot of the diamond from the overpass. This overpass would be a great place to shoot outgoing CN freight trains. I am going to head back here again to get shots when there is some more colour.
﻿ 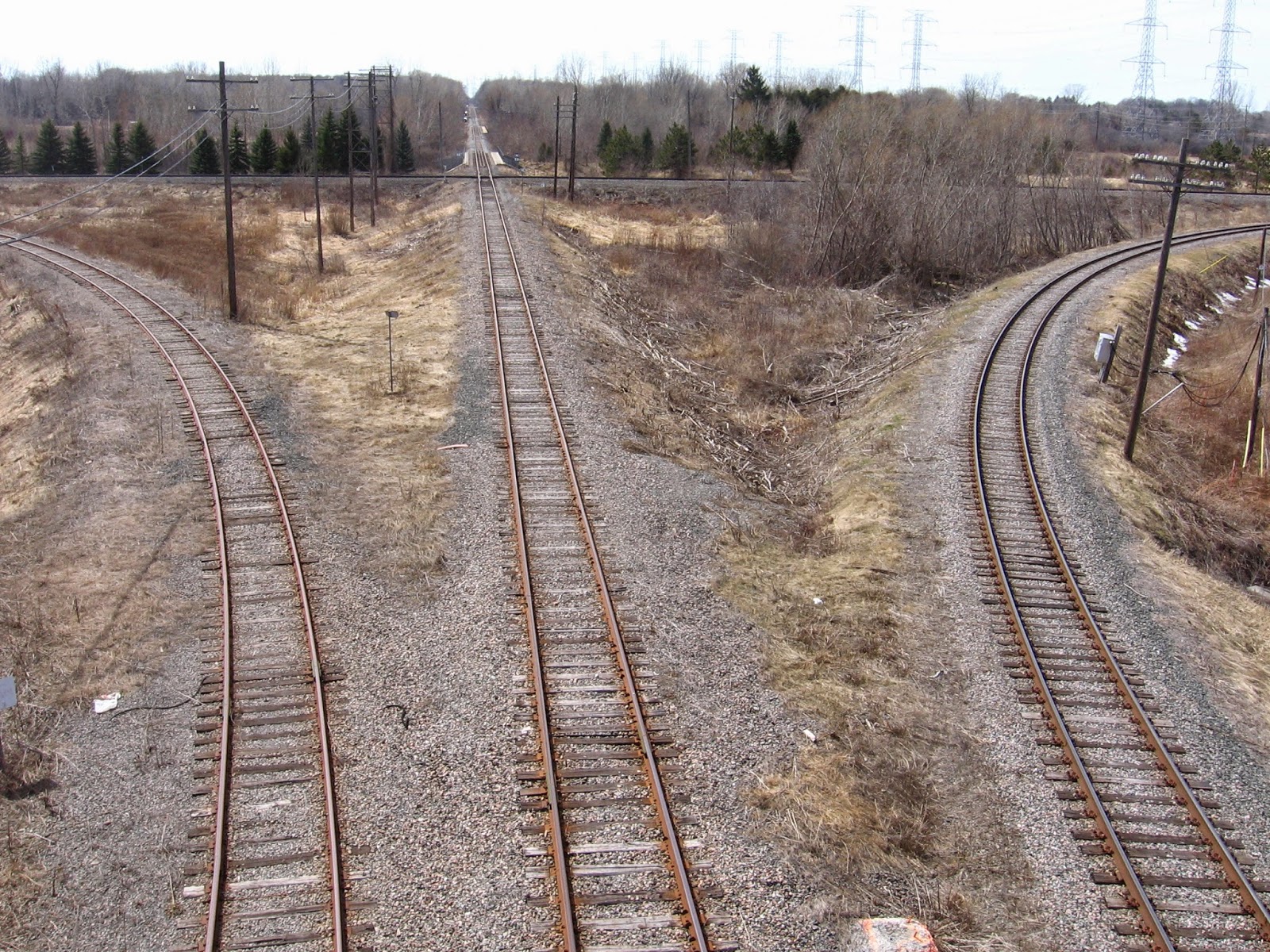 ﻿
I made sure to walk across the overpass to take a shot east of Walkley Yard, which I have not visited in a long time. This gives you an idea of the size of the yard and its level of activity (not much). The building to the left is the O-Train maintenance facility. 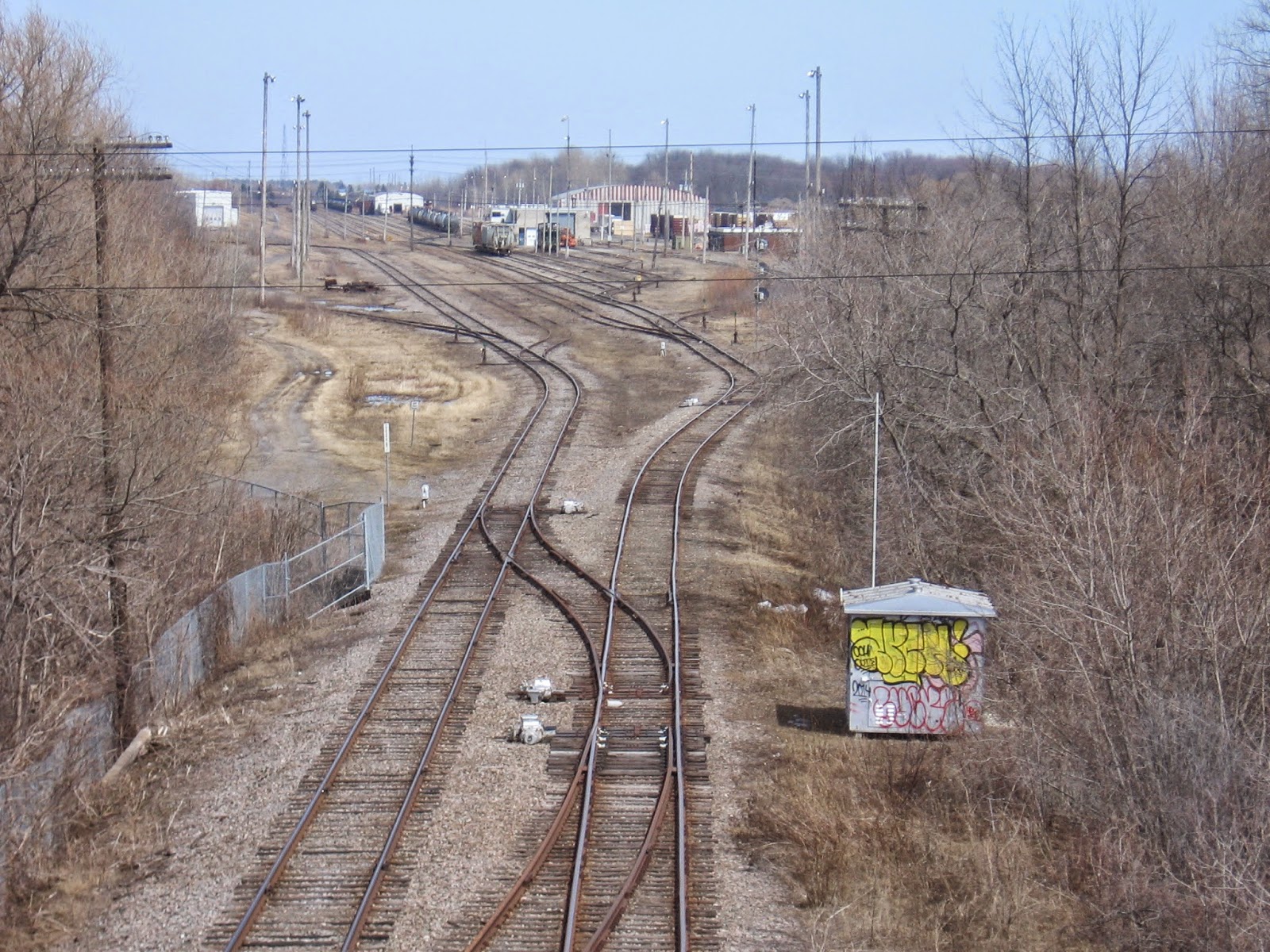 When I headed back to board the O-Train, I took a shot of the trackage south of the existing O-Train service. This trackage, formerly the CP Prescott Sub, is still used occasionally by CN to deliver cars to the National Research Council's transportation research facility. Time will tell if this stretch sees future use as a commuter rail link to the airport and further south to the Riverside South neighbourhood. 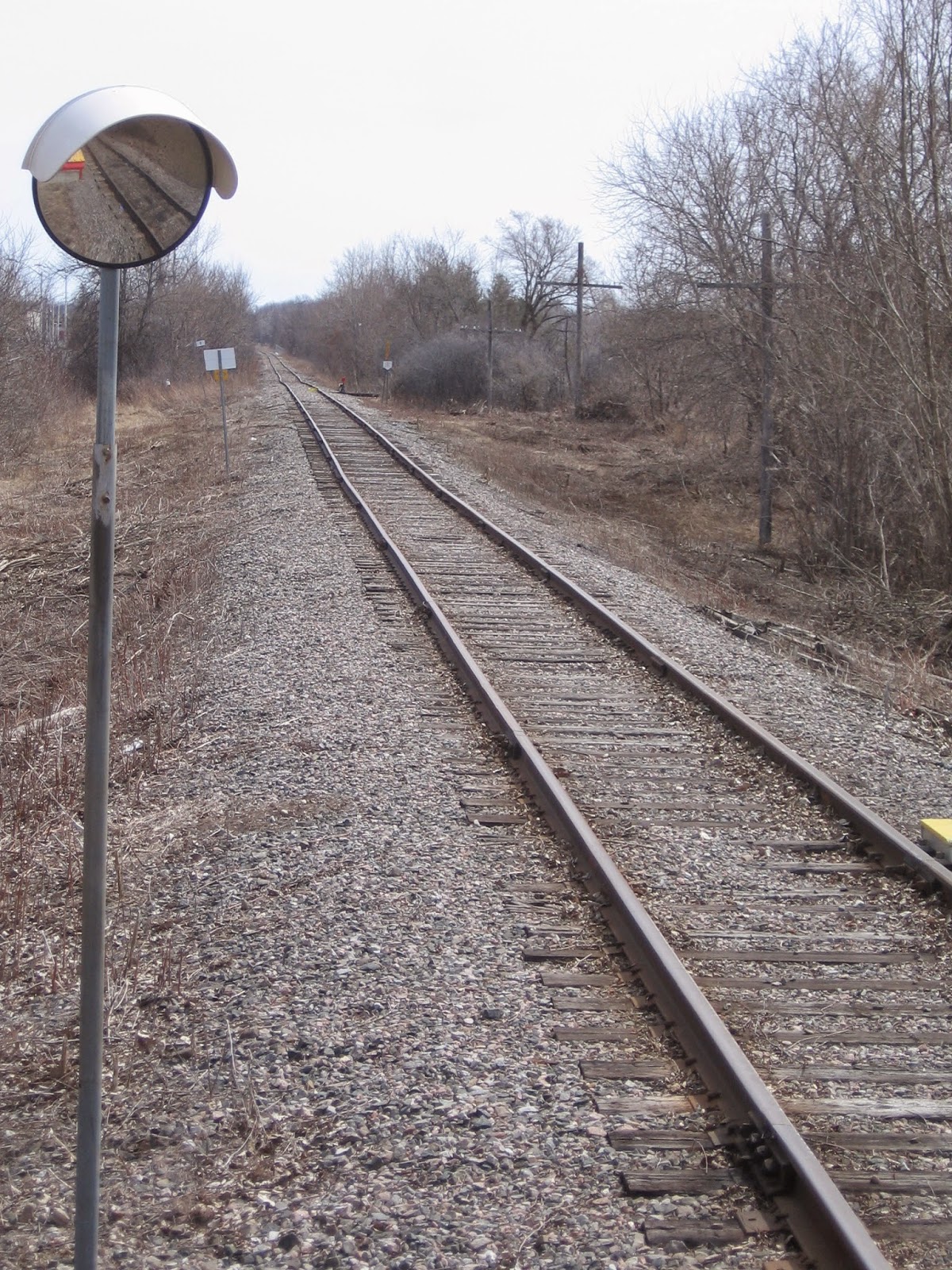 I saw this sign a number of times on the O-Train line and wondered what it meant. I did some quick research and found out that this marks the presence of a magnet trackside. These magnets are found at the passing sidings along the Trillium Line. They are part of a safety system that ensures the trains are running properly and are not exceeding limits. The magnets, placed beside the right rail, receive information from corresponding magnets on the trains travelling over them, which helps ensure that everything is operating as it should. Essentially, the ensure that the trains do not speed through areas where they need to reduce speed (like when one train passes by another on a siding. That's the layman's version. It's much more technical than that, as you can read here. 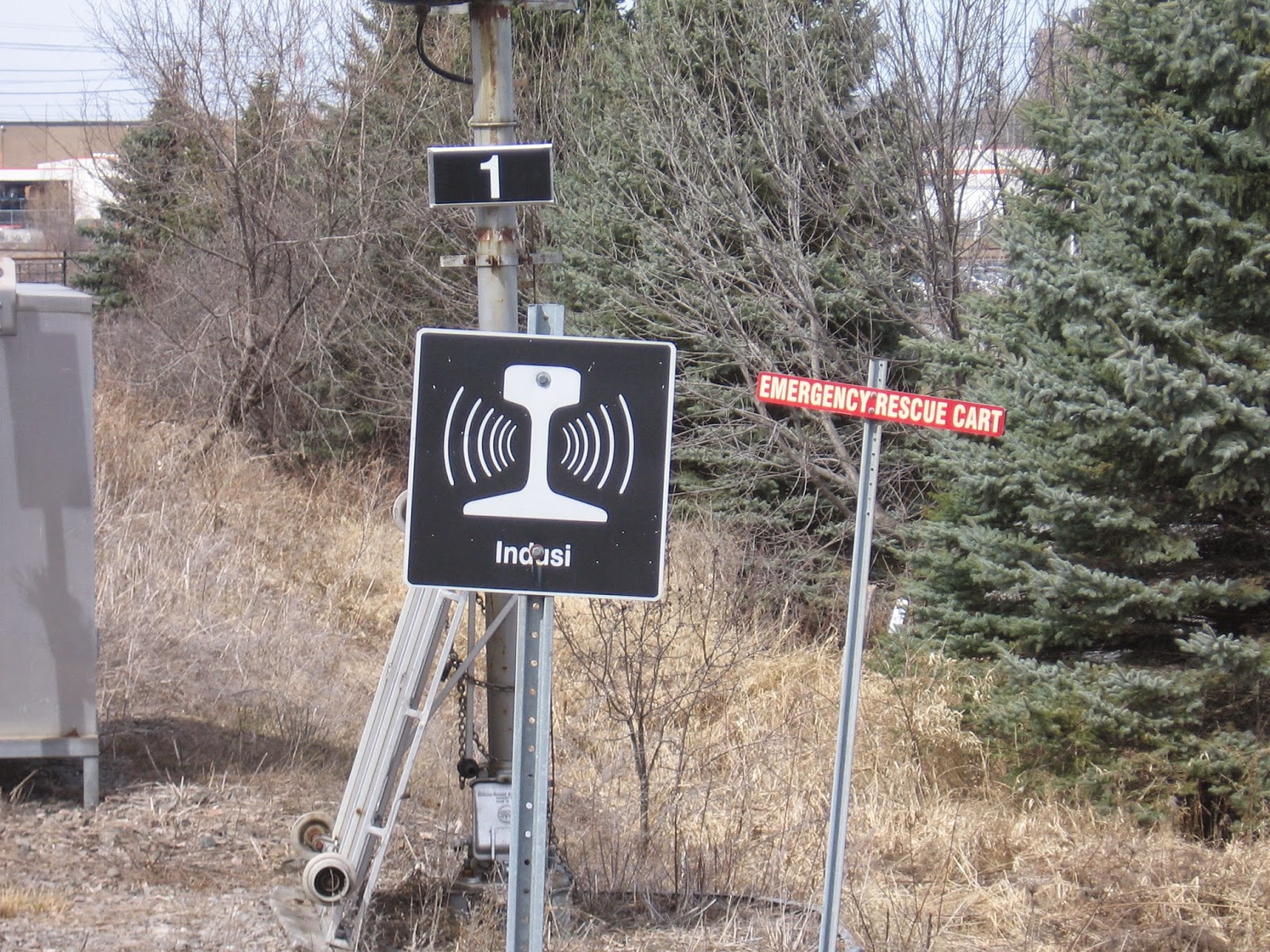 I also took a quick shot of the O-Train as it crossed the diamond on its way to pick us up. You can see the CTC sign and another one to the right. I know what the CTC means, but can someone tell me what the MT sign means? I've seen this a few times in my travels but have yet to figure out what it means. 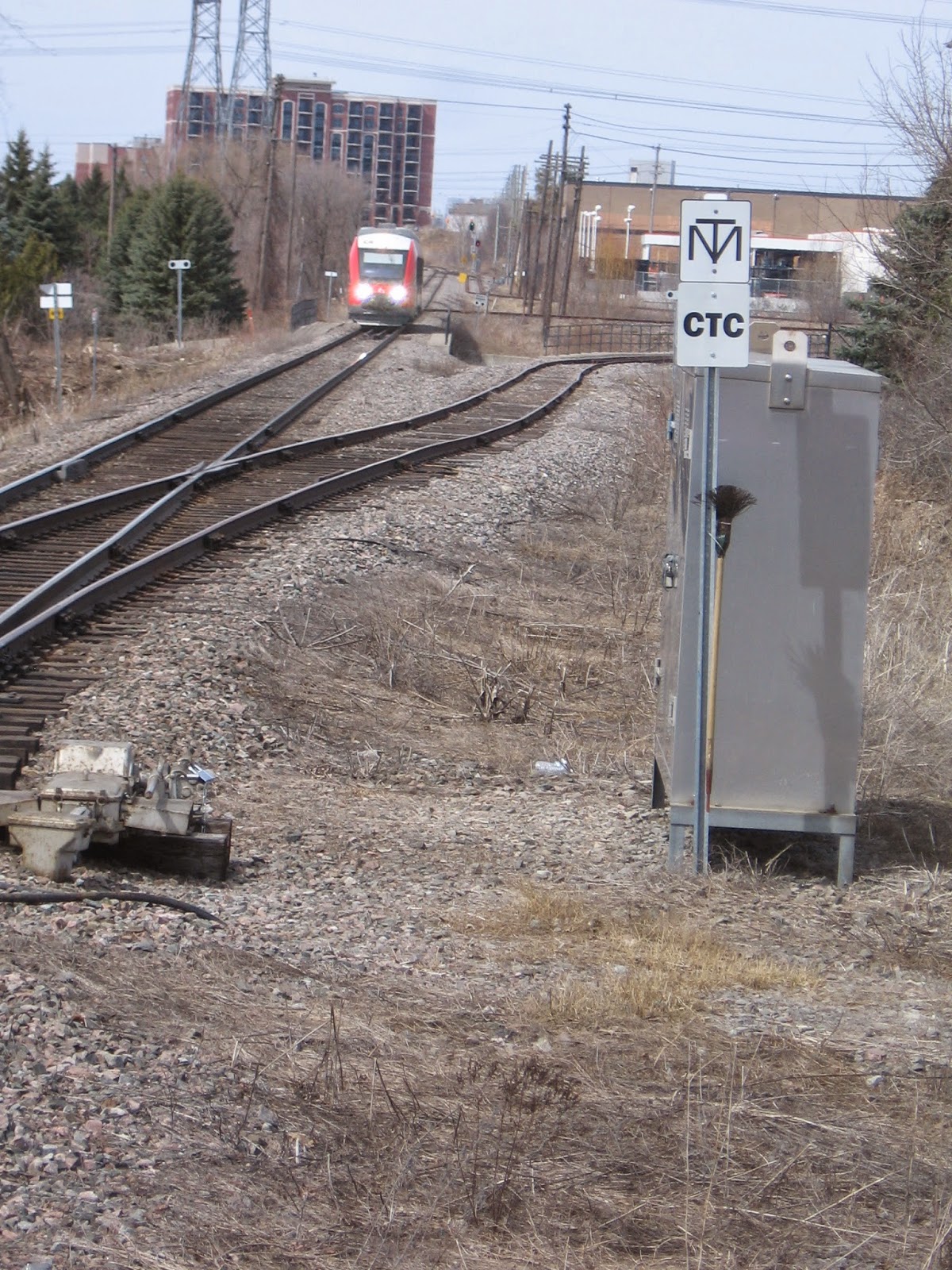 I will save the story behind this catch (below) for a future post. Yes, this is CN 589, the Arnprior local, making its way over Moodie Drive. I have wanted to catch this train for years and was able to get a fleeting glimpse of it this week. I wish I had a perfect shot to share, but this was all I could get. More to come on this later.

Last item to share. There appears to be a new effort to save the Hull-Chelsea-Wakefield Steam Train on the old CP Maniwaki Sub. The train has not operated for years, due to a washout on the line, which has never been fixed. The railway is owned by municipal authorities in the Outaouais and West Quebec regions. A spokesman for the effort said he expected that there would be more to share soon, although he did mention that efforts to get the province to foot the bill for the track repairs has hit a snag. The province wants to make sure that the trackage is not prone to future washouts before it pays to have the line fixed. The group was expected to have something more definite by the end of March. Still no word on what the final decision will be. Fingers crossed.
Posted by Michael at Thursday, April 16, 2015
Email ThisBlogThis!Share to TwitterShare to FacebookShare to Pinterest
Labels: Arnprior, Beachburg Subdivision, Canadian National, CN, CN 589, Nylene Canada, O-Train, Ottawa, Smiths Falls Subdivision, Trillium Line, Via Rail

The white M T sign you mentioned marks where the main track begins. Beyond that point some sort of permission, be that a signal or clearance is required to proceed.

Liking your new header photo, and in the post (with or without O-Train), Michael. Looking forward to the 589 catch story...

Nice job on the 589 this week. I was hoping to beat it for a shot of my own on the 416 bridge but was hung up late at work. Of course, as luck would have it, I walked out of the front doors of my building just in time to hear a horn blast. Guess I'll have to try again next week....

Andrew -- Thanks for the explanation. Good to know what those signs mean. That had been bugging me for a while. Eric -- I hope my story of "catching" 589 makes up for the quality of the photos. AJ - I'm hoping local railfans can build up a bank of information on this train so we can catch it more. Thanks everyone for your comments.

Looking forward to seeing the 589 post Michael! It's funny, I had the exact same experience as AJ this passing Wednesday. I headed out in hopes of getting some shots just as I hear the sound of the horn in the distance. I really wish I had more knowledge on the times of this train.

For the times of CN589, I've caught it a couple of times. I wish I knew exact times, but from the times that I've caught it, it usually goes through Bells Corners these days between 8:45 and 9:45, in Arnprior around lunch time, and returns anytime between 2:30 and 4:00.

Thanks Dave, those are some great shots. I've even caught it on the return trip as late as 5:00 in Bells Corners. It's a shame that there really is no way to know.

Thanks for the comments Dave and Michael. I think that, the more we all pay attention and take note of the time, the better our chances of success in catching this train. More to come on this soon.