(This is another post from Beachburg Sub contributor Dave M. Please feel free to comment and let Dave know what you think - Michael)

This post explains what kind of kit I used in order to take one of my favourite shots of CN 589, shown below. CN 589 heads west through Carp, Ont. on its way to Nylene Canada plant in Arnprior.

When performing any activity, I find it is more enjoyable with the right kit. One of the most frustrating parts of this hobby is trying to figure out when the train is coming so you can be prepared when it arrives. When I first started, the train's arrival was always a surprise since I would wait for a long time and was distracted when it finally came. I'd usually fumble with my camera and get off a couple of shots as it flew by. In order to be better prepared, I found that the following gear is essential.

If there is one book to bring while railfanning, this is it. It contains everything you need to know. The three most important chapter I use the most are:
a) Subdivision listings - This is very useful since it lists all the subdivisions by name and includes stations, mileposts and locations of hot box detectors.
b) Signals - Understanding rail is much more complex (and meaningful) than traffic lights. This chapter includes a clear explanation of what each of the signals means, so that you can be prepared when a train arrives.
c) Radio frequencies - This chapters lists all the frequencies used on each subdivision.

This book can be purchased through the Bytown Railway Society and through hobby shops.

A radio scanner provides a small window into the operations on the tracks you are observing. I've found it useful since you often hear the crew relaying back their location or signal state. If you are near a hotbox detector, the scanner will give you a heads up when the train crosses over it, which allows you to be ready.

When railfanning, many people like to take photos of trains as they pass. A camera capable of shutter speed 1/250 or faster is best for getting a sharp image. Taking pictures at a slower shutter speed will result in some blur, especially when the train is travelling quickly. I typically bring two lenses for my digital SLR, a wide angle (11-16 mm) and zoom (100 mm).

If you are trying to catch a passenger or commuter train, a timetable is useful in helping you know when a train should arrive.

In order to get the shot at the top of the post, I had to know that CN operates its freight service on this line (Renfrew Spur) sometime on Wednesday. On Wednesday, I started listening on the radio scanner. I heard the controller ask the train to report its position back. The crew reported its position, saying they were at milepost X. I was lucky to hear this, since this train doesn't report its position too frequently. From that spot, I was able to locate the train's position using the trackside guide. I then drove slightly ahead of where the train was last heard and waited for it to arrive.

For the image below, I used the Via Rail timetable to figure out the approximate time the train would be running through Richmond. I then listened to the scanner to figure out when it left Fallowfield Station so I could be ready when it came by.

A westbound Via Rail corridor train speeds through Richmond, Ont. on its way to Toronto.

I have brought the following items with me in the past, but find that I no longer use them.

1. Canada Rail Atlas - This book has many nice maps, but I've never used it. The Trackside Guide is a much better choice.

It is important to note that, if you don't have your kit, you can still have fun railfanning. In the shot below of CN's 589 in Bells Corners, I just happened to be at the grocery store when I heard a train whistle. I grabbed my camera and was able to get this shot below. 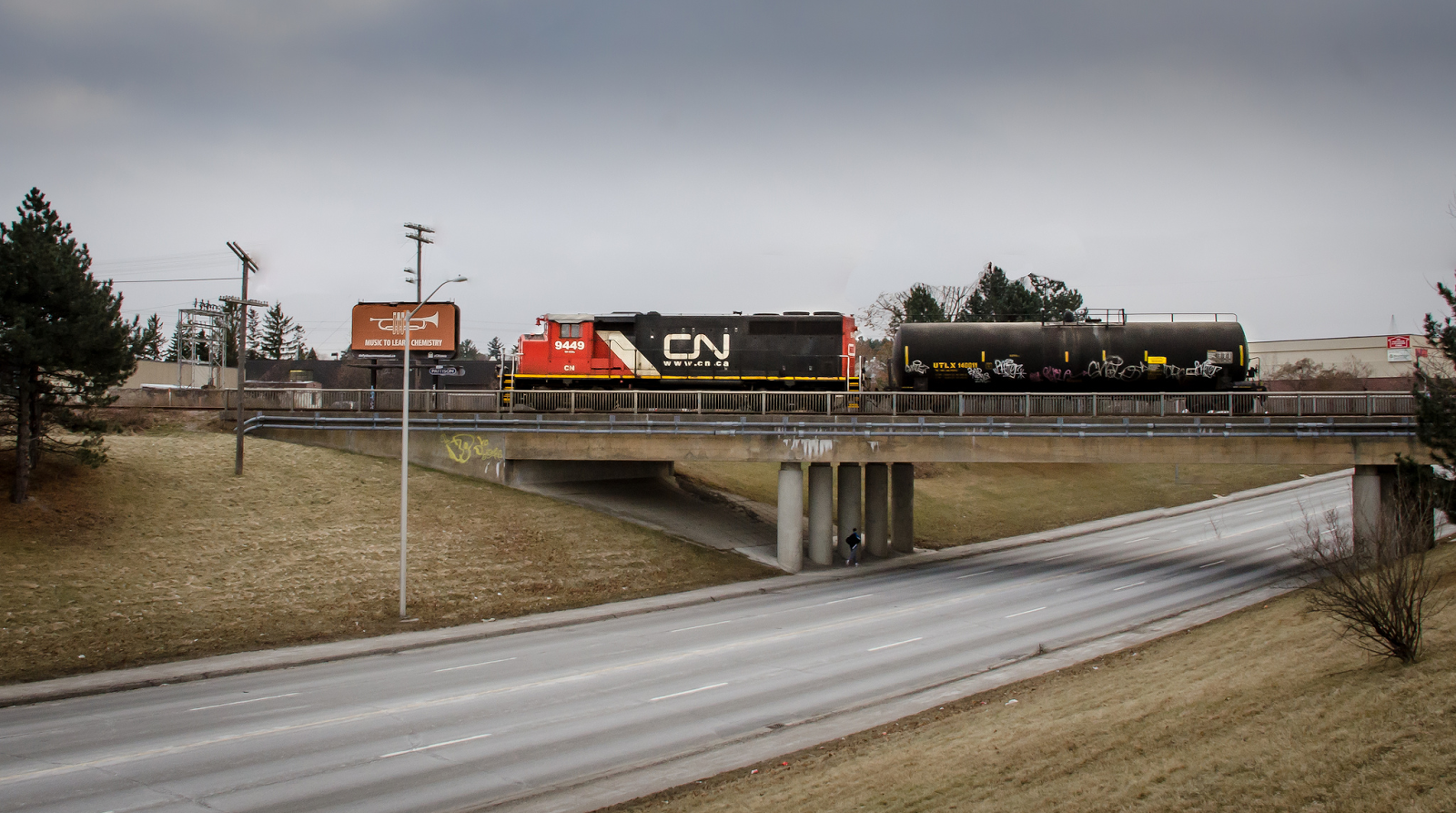 CN 589 passes over Robertson Road in Bells Corners on the remnants of CN's Beachburg Subdivision southeast of Nepean Junction.

Feel free to drop me a line if you have some kit that you've used successfully when railfanning.

(Special thanks to Dave for another contribution to The Beachburg Sub.)

Great post, Dave. I hardly use my Trackside Guide unless I'm in a city I don't know.

Often I bring my tripod along and never use it... it's only for video in most cases. I got a monopod for Christmas that I have used once or twice and hope to use more, since it's more portable and clips to my camera bag.

Nice post, Dave. Thanks.
I'm not too serious about rail fanning, but enjoy it any way I can. Often times, it's nothing more than an impromptu stop with my 2 year old son. Thus, my iPhone is all I have with me. You can sometimes get lucky, and catch something interesting.
An interesting subject can make up for the sins of the lacklustre equipment!

Steve, I've not thought about the monopods before, but its gotta be lighter than the hefty tripod, which would make it more likely for me to take with me. I may go out and give one a try to see if it would help with panning shots.

The best camera to shoot with is the camera that you have. I've seen numerous shots that have been taken on camera phones that put high end DSLRs to shame, so keep shooting no matter what you are shooting on.

Is the CN Nepean sign still up on the napean sub if so we're do I go to see it ?