As I mentioned in a previous post, my brother has been busy taking photos in and around Sarnia with his son in the past few months. We here at The Beachburg Sub have been the happy beneficiaries of his contributions. I have a number of shots of tunnel trains, including one series taken from the Port Huron, Michigan side of the tunnel. These will appear in a future post. There was one photo that Marc sent my way that really caught me off guard recently. Here it is below. 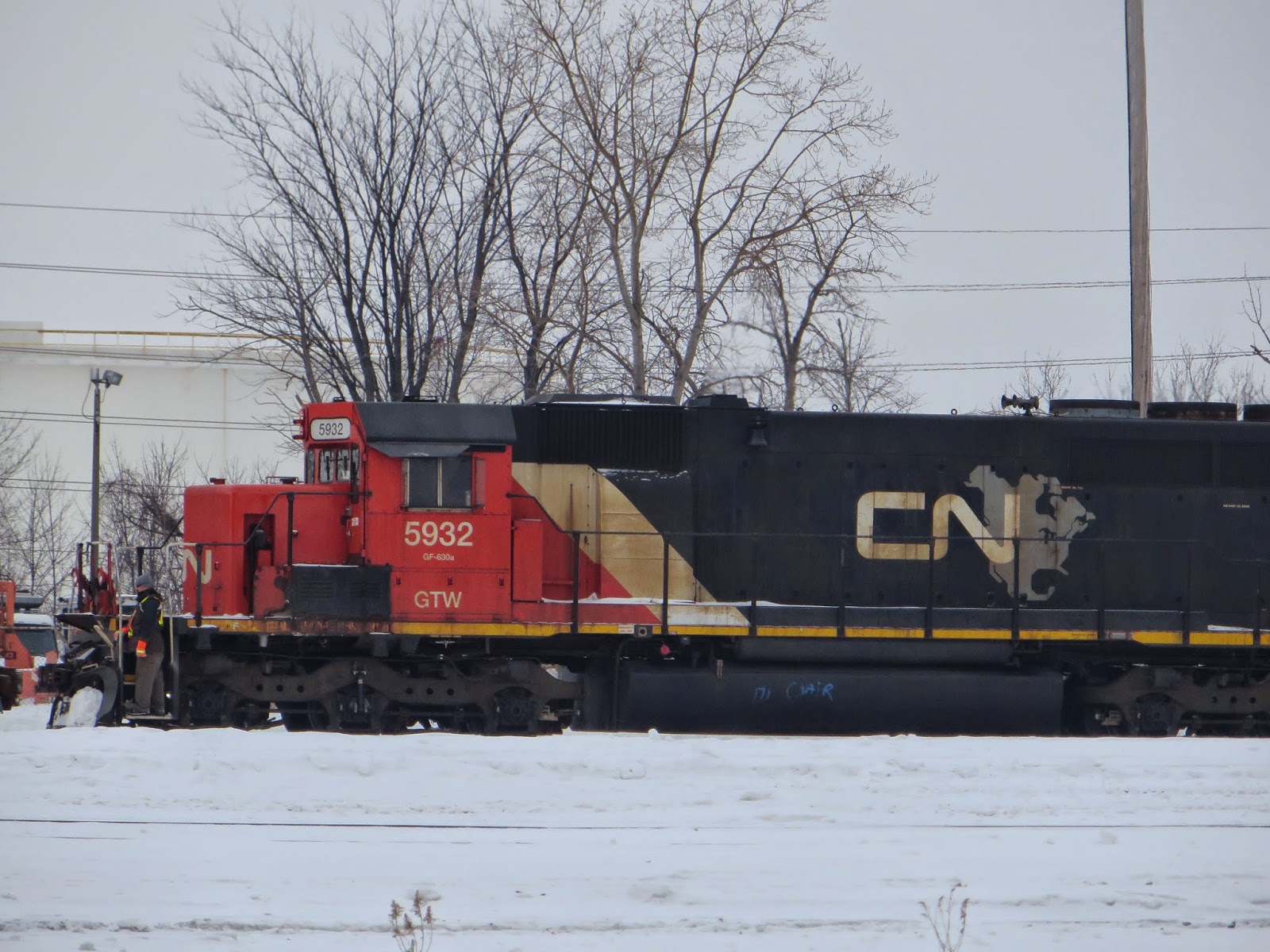 That's right. That is the CN North America scheme still logging miles on a Grand Trunk SD40-2. You can read about the CN's subtle red-white-and-black paint scheme tinkering in this post here. The number boards on the top and side of the cab look a little different as well. Now check out this 1990 shot of the same unit. It looks like this diesel has had a colourful history. It was clearly a Union Pacific unit at one point before being repainted in the CN North America scheme, like in the 1993 timeframe. How this unit has endured in this scheme for so long is likely an interesting story. I'm always fascinated by engine that carry old colour schemes far past their best before date.

His find reminded me of the day when I took a bunch of shots of CN diesels at the old Sarnia roundhouse and ended up capturing a few units in the North America scheme. I never cared much for this logo, since I felt it was needlessly complicated. I can't imagine that those who had to paint these logos were terribly enthused with it either.

Here's a shot taken near the Sarnia roundhouse in the summer of 1993.This one is another SD40-2 with a wide nose. This unit has since been converted to the current CN scheme, as you can see here. 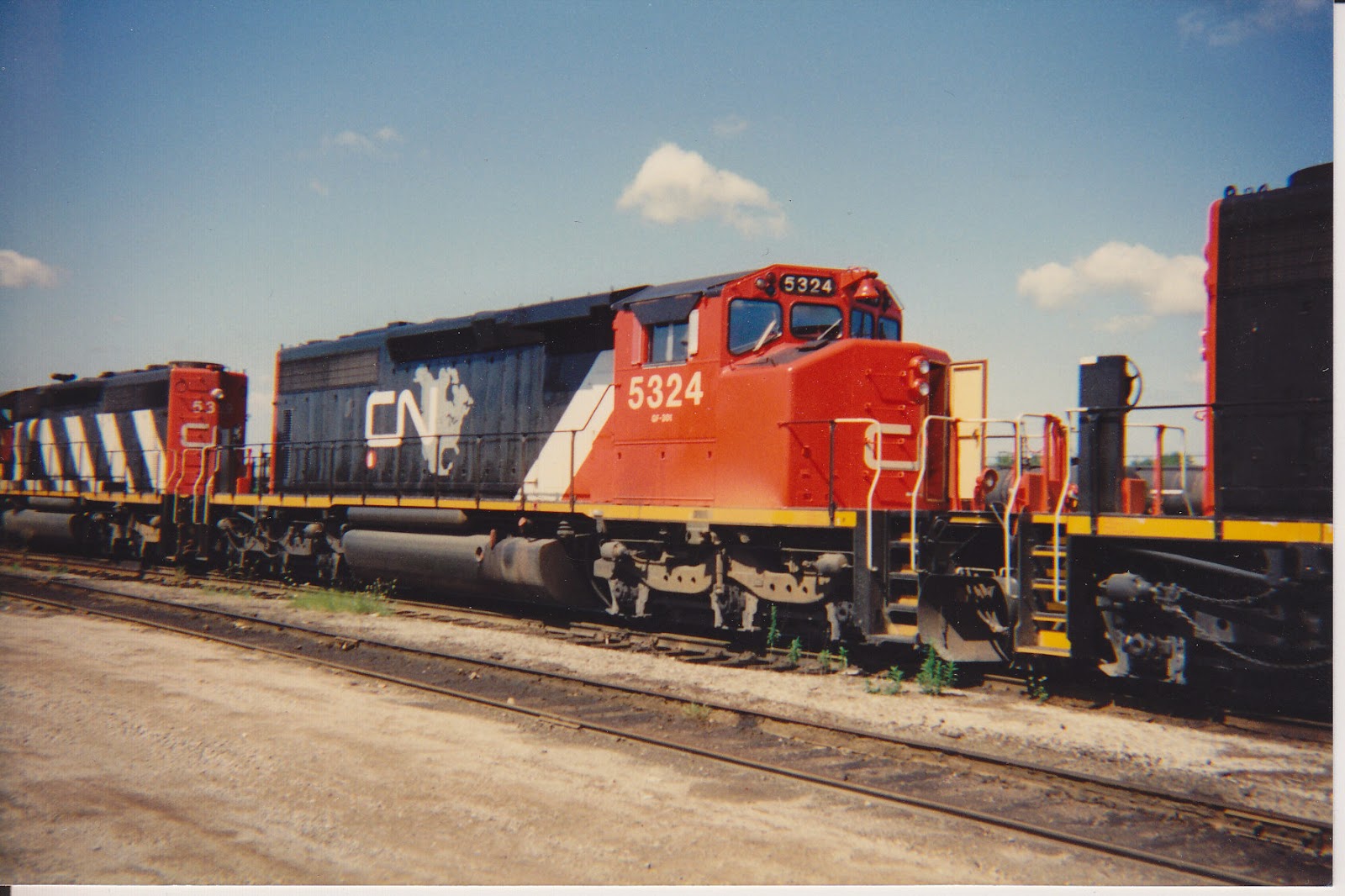 And here another shot of 5324, and another unit in the North America scheme, right around the fueling station in the Sarnia Yard. 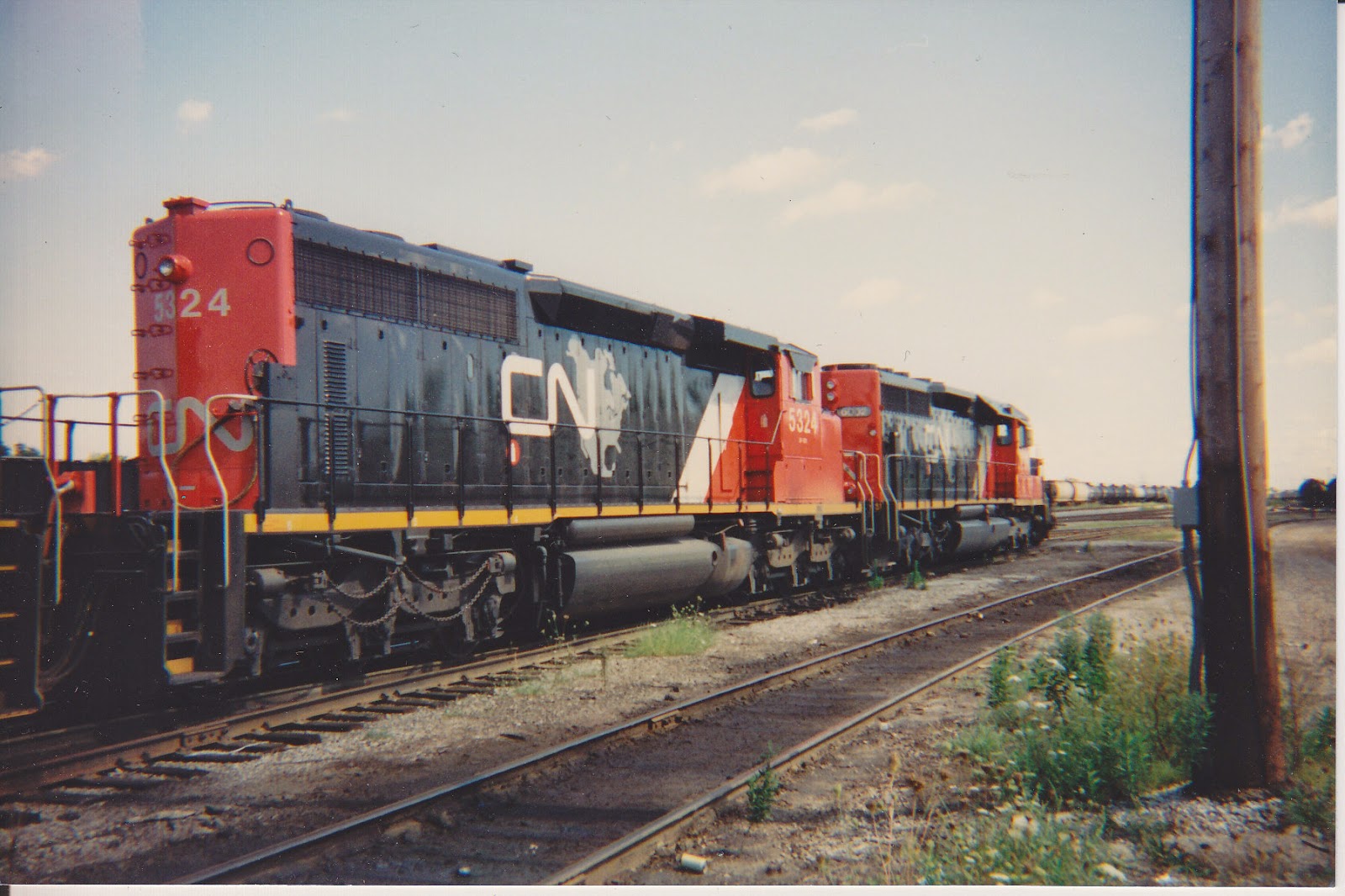 Those readers who might occasionally glance at the right-side tab on the main blog page will notice some changes. I have added a few blogs that I think will interest you as well. One will be familiar to many of you who have drifted over here from Trackside Treasure or Confessions of a Train Geek. CP Rail Manitoba and Minnesota Subdivision is one of the better model railroading blogs I have come across. It also adds in some excellent posts about big-time railroading. It is definitely worth checking out.

The second you might not know. However, I can tell you that the future of railroad blogging is in safe hands, if this blog is any indication. I first came across Nathan O'Neill in this article in the Toronto Star. I encourage you to check it out and read up on what this 7-year-old rail fan has already accomplished. He sounds like an amazing kid. I have linked to his blog because it will no doubt remind many of us where our passion for railroading started. I encourage you to read his blog On the Rails and send along an encouraging word to Nathan. I did. He returns messages.

Finally, for my Ottawa readers, I am adding Ottawa Rewind, an absolutely fascinating blog about Ottawa's history. The author focuses on a number of lost pieces of Ottawa's history, including this post about the Prince of Wales bridge. I would invite you to check this blog out as well, especially if you are interested in this city's history like me.

I remember the CN North America logo being described as looking like a big patch of peeling paint. Both CN and CP were trying to find an identity (CPs two flags was a PR disaster)after massive changes through line abandonments and new mergers and ownerships. Both came out stronger financially and have continued to progress.
Andrew Kerr
Sydney, Australia

I never cared much for the CNNA scheme but you do see it around. I spotted CN 2448 on Wednesday evening still sporting the logo. It just doesn't show up well and Eric's post shows how poorly it showed up on the grey cars (which I have never seen personally).

Thanks for the comment Steve. You're right. There are still a few units lingering around in CNNA colours, but that's the first I'd seen in Sarnia in some time. I'm hoping Eric will link to his CNNA post in the comments section. Eric?

I don't know if that one cylindrical hopper with the map is still kicking around but I have seen it.

There are more units than you may think still wearing that scheme!

Maybe a better title would be "A rare-ish find." It's been a while since I've seen a CNNA unit, but that doesn't mean much when you live in Ottawa and don't get many opportunities to see much. Thanks for your comment.

While this post is not meant to be a history of the CNNA scheme, I did find Eric's CNNA post on Trackside Treasure. Worth a read.
http://tracksidetreasure.blogspot.ca/2012/07/cn-north-america-paint-scheme.html

Thanks for the Trackside Treasure shout-out and link to my CNNA post here in the comments section.

I find it to be still a rare find to find one of these CNNA units in service. Correct - my post was not to serve as a history of the CNNA scheme, and I was much more interested in the freight car schemes and my "chases" or encounters with the cars trackside. I gave a cursory nod to the locomotive application, not being primarily a locomotive enthusiast.

Thanks for your comment Eric. I was actually referring to my CNNA post as not being a definitive history. I think yours is much more comprehensive in its approach to the history of the paint scheme. I reread your post today and was impressed (again) that you captured those elusive CNNA cars.

I saw a CN North America scheme C44-9WL in the yard of Vancouver, BC. It was accompanied by a CP Gold Beaver schemed GP38-2.