The Transportation Safety Board released some of its findings regarding the tragic bus-train collision in Ottawa last year. The initial findings show that the crash was likely caused, in part, by distracted driving. To briefly recap what happened, last Sept. 18, an OC Transpo double-decker bus collided with a Via train during the morning rush hour, killing five passengers as well as the bus's driver. The collision has led to a year of questions about the safety of level rail crossings in Ottawa. This accident occurred in the Barrhaven neighbourhood at the Woodroffe Avenue crossing. Via Rail's Smiths Falls Subdivision passes through this neighbourhood and has been the site of numerous signal malfunctions in the recent past. Thankfully, those issues appear to have been addressed. 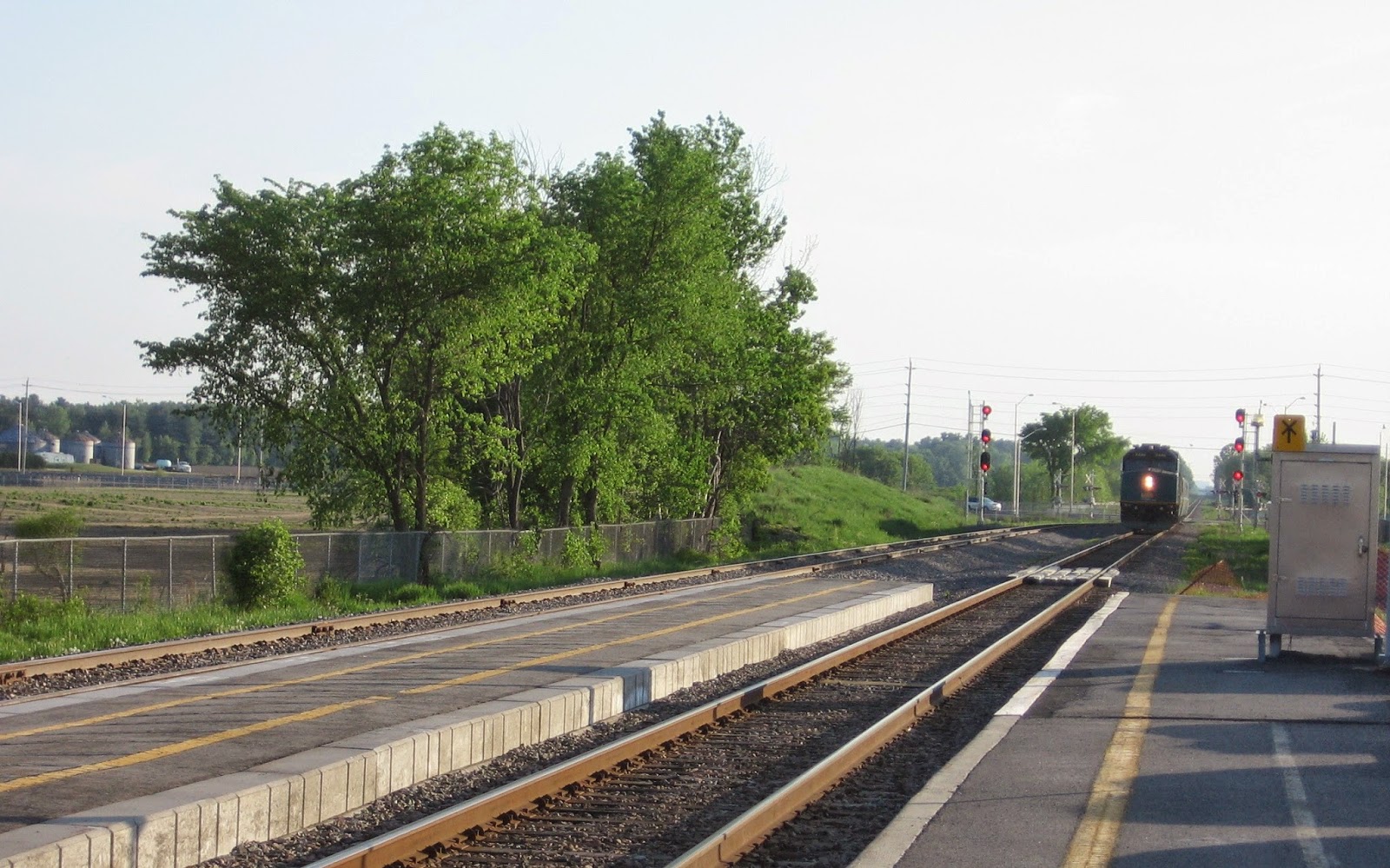 A Via Rail corridor train crosses Woodroffe Avenue, as seen from the platform of Via Rail's Fallowfield railway station in May 2012.

The TSB found that the bus was approaching the crossing at 67 km/h along the bus-only Transitway lane. The posted limit for buses at the time was 60 km/h. That has since been reduced to 50km/h. The board also found that the driver was likely looking at a monitor above his sun visor at the time, which may have distracted him from braking the bus. These double-decker buses are equipped with a monitor screen that allows the driver to see what is happening on the second level of the bus. Witnesses say someone was standing on the second level, which is not allowed on these buses.

These findings are heartbreaking for several reasons. Although they have given grieving families some answers, they also shine a light on the driver's error, which will no doubt haunt his family for some time. Also, the findings pointed out that, if the bus had been travelling at the posted limit at the time, the driver would have been able to stop the bus before colliding with the Via train. Again, these findings would be tough to hear, given that they lead to a number of what if questions.

OC Transpo has posted its special constables in the area to enforce the new speed limit.

Good news for the Renfrew Spur?

The line, formerly the CN Renfrew Subdivision, serves the Nylene Canada industrial polymer plant in Arnprior, just outside Ottawa's western border. The rail line is owned by the city and maintained by Nylene Canada.

I found an interesting line in an Ottawa Sun story, which has me wondering if there may actually be a forward-thinking rail advocate in this region. The sentence in the story, which greatly interested me, reads as follows:

"Nylene is interested in possibly expanding the use of the track since lines connecting to the larger rail network are so rare west of Ottawa."

The story is behind a paywall, so I won't link to it, although you can find the story doing a Google search by typing in Nylene and railway. To be honest, I'm not sure what the reporter meant to convey by saying "expanding the use of the track." There is very little in the way of industry along this line, especially west of Kanata.

At the very least, it suggests to me that this rail line appears to safe for now. Now, all I have to do is catch Local 589 out to Arnprior on a Wednesday. 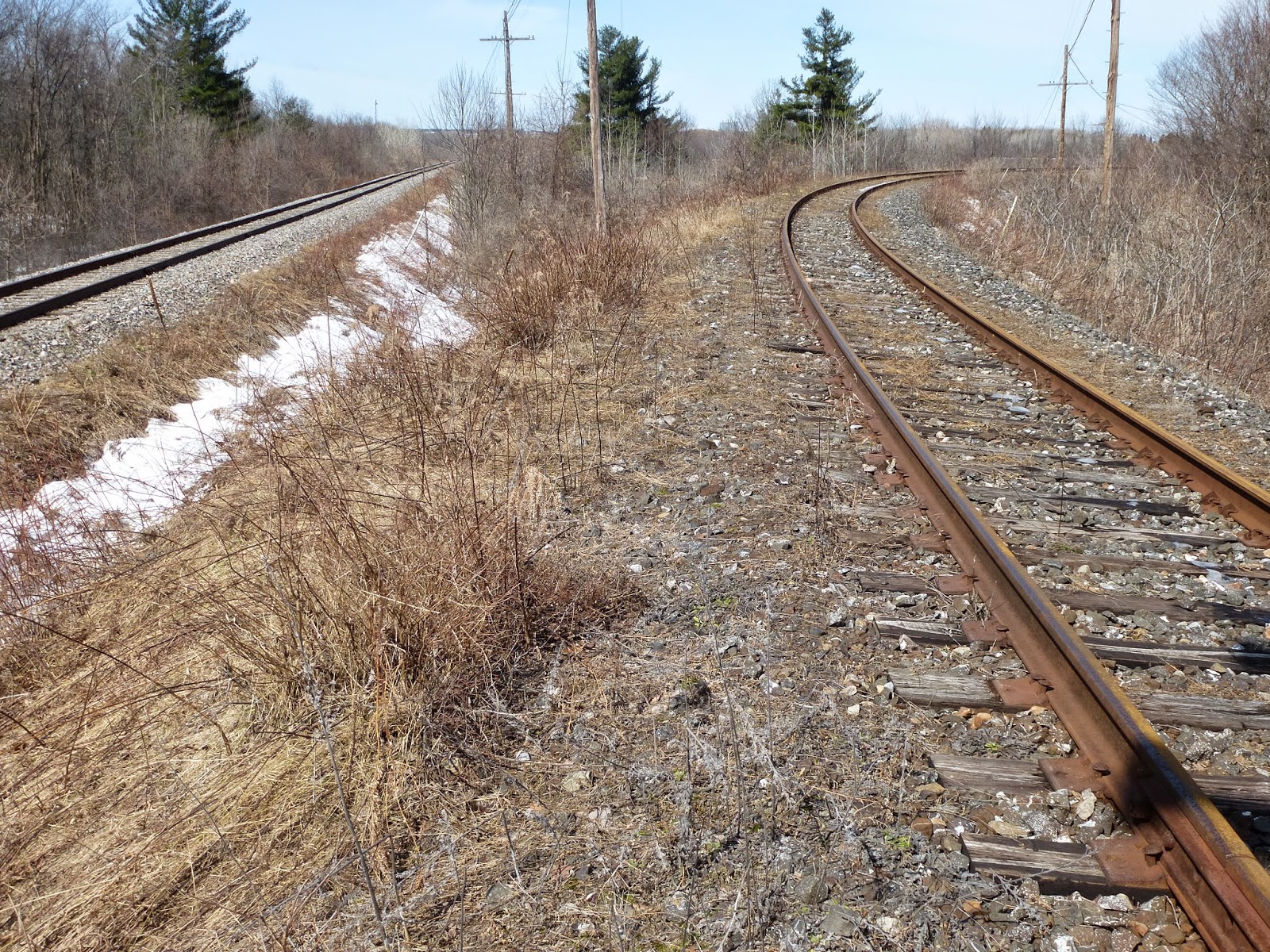 Above: The Renfrew Spur (seen at left in the spring this year) appears to be in good hands.
Finally, I thought I would share another piece of interesting local rail news. A mayoral candidate, Mike Maguire, has proposed something The Beachburg Sub has been advocating since the beginning. Instead of spending billions on a deeply flawed light rail plan, Maguire is proposing something radical. Running commuter trains on existing (and underused) rails in the capital. Do you think Mr. Maguire read last week's post?
﻿
Posted by Michael at Thursday, September 25, 2014
Email ThisBlogThis!Share to TwitterShare to FacebookShare to Pinterest
Labels: Arnprior, CN 589, commuter rail, Fallowfield, LRT, Nylene Canada, OC Transpo, Ottawa, rail safety, Renfrew, Smiths Falls Subdivision, Transportation Safety Board, Via Rail

Thanks for another great post Michael. I'm glad to see there is progression in making the level crossings safer on this line in such busy areas. Though, I think further action is still needed. I believe construction of overpasses to replace some of the level crossings on the busier roads on this line should be considered due to the high amount of trains passing through Barrhaven every day.

That news regarding the Renfrew Spur makes me very excited, it's about time someone has recognized the usefulness of said line. I'd love to see some more action on it in the near future. It would be shame to see it go to waste thinking of all the infrastructure that was built for it in the seventies, not to mention seeing another rail line in Ottawa go would be very frustrating in itself.

I've managed to catch the 589 three times, all three heading back east at around 3:45 PM on Wednesday at the Greenbank overpass. I don't think that's a very consistent time as I have tried to catch it 3 other times at the same time unsuccessfully. I've yet to try and catch heading west in the morning. Hope that helps!

3:45? Interesting. I must go under the Holly Acres bridge on my way home around 3:40ish. All this time I have likely been missing it!!

Fantastic news about the Renfrew Spur. I know I have been trying to bring it up in discussions on CFRA programs as well as their various FB pages. It's been somewhat well received, but I am more hoping candidates like McGuire are taking notice (I know some people who know well and support him publicly). Like the bike lobby, you just got to keep trying to push it!

Yeah 3:45 at the Greenbank overpass is the only time that I've ever caught it. I don't think that's the time every week though because as I said sometimes I'm unsuccessful. I wish I knew all of the times. By Holly Acres bridge do you mean the 416 bridge?

I'm glad there are candidates like Maguire that are pushing for using existing track in the city for commuter rail, it does make quite a lot of sense.

Yes the 416 bridge. I identify it by Holly Acres since I drive that stretch daily to get to the office.
I might camp out for 20-30 mins on Wednesday after work and see if I can get lucky. If I get successful over the next few weeks, maybe we can figure out a pattern and map out a rough timetable.

Thanks for the comments, Michael and AJ. I was really hoping to get some locals involved in a hunt for 589. I am happy to report that I caught 589 on Sunday on its way to Kott and Twin Elm. I will be sharing those photos this week.

That sounds like a good plan AJ. I'm confident you'll be able to catch it this Wednesday between 3 and 4 PM if you decide to try.

Lots of discussioin about Mike McGuire's plan as well as a GO system in Ottawa on the Lowell Green show this morning. Looks like Heavy rail is finally getting some debate in the city.

Nice catch on the 598 - was there a rough time/location when you caught it Sunday?

I will lay it all out in this week's post. Stay tuned! Good to hear that heavy rail options are finally being discussed. Maguire's transit plan makes sense to me. It seems realistic whereas the incumbent mayor's LRT plans are okay in theory but far too expensive for my taste. Also, how long will it take to get that line out to Kanata and Orleans, where it is truly needed? Heavy rail can reach Kanata now. Seems like a no-brainer.

I can't find any contact information on your blog, but I thought you might be interested to know that what I think is the rail removal train was parked in Walkley Yard last night, Sept. 29.

Thanks for the info, Alex. I will follow up. Looks like Beachburg north of Nepean Junction is finally being removed.

Strongly agree Michael. I see where the mayor is getting at but realistically, if there's an already existing line to Kanata, why build something that will take much longer to finish, and will cost a whole lot more?

Out today at 3:30. Sat for awhile a good distance from the bridge off Holly Acres but did not have any lucky. Much farther away than I expected. I hiked from the car over to the tracks and found some teenagers loitering around on the bridge and walking down the tracks but again no luck. Was hard to see the light tree towards Bells corners but I don't believe it was functioning. If it still does, I expected it to be red. Oh well. I'll try again next week.

Sorry for pushing you out there for nothing! I ended up hearing the horn at 5:15 PM that Wednesday crystal clear. I guess the times can fluctuate quite a bit. I wonder if there is any pattern though.

Did you catch it yesterday AJ? It was there at approximately 3:30.

Accidents are always heartbreaking and these findings are heartbreaking for several reasons. They will haunt the driver’s family for some time. Never choose an attorney based solely on their cost. If you hired a good Los Angeles DUI attorney, you do not have to carry your image as a drunk driver forever. Moreover it will save you from mental agony and trauma DUI can cause.