Updated: More trouble for Via in Barrhaven

Update: The following is a recap of the media's description of an incident at a Via Rail level crossing in Barrhaven from the Ottawa Citizen and CFRA.com. Please note the comment below the story from Via Rail's former COO John Marginson, which sheds a very different light on the incident compared to what was reported in the media. I'll leave it to you, the reader, to decide what to make of the official Via explanation and the media's account, both of which seem credible. - Michael

Via Rail has a target on its back in Barrhaven these days, and many in the city would say rightly so. The railway's ongoing issues with its level crossings in the suburb continue to tarnish the company's image in Ottawa's southwest neighbourhood. On May 29th, a local resident reported that the signals and crossing gates at the Fallowfield Road level crossing failed to activate when a Via train approached. The resident alerted media, explaining that Via crews were flagging down traffic as the train passed through. 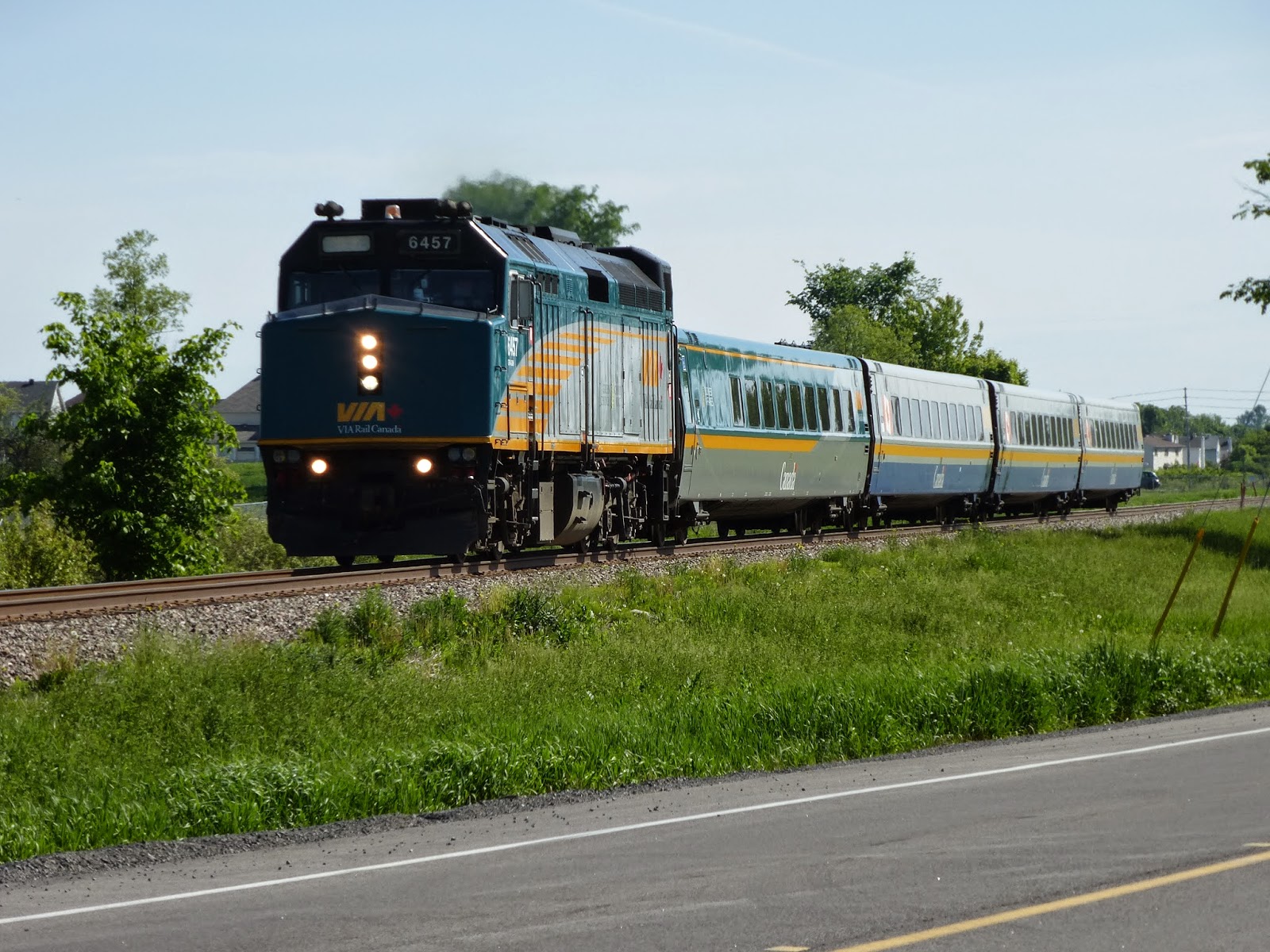 The report of this latest malfunction comes at a time when the railway is working hard to get out from underneath this problem. Despite a number of corrective measures taken, some of its problems seem to persist. You will recall from an earlier post, Via's Barrhaven Problem, that the railway's problems started with last fall's tragic train-bus collision at the Woodroffe Avenue crossing near Fallowfield Station.

Since that time, the company has taken a number of steps as it attempts to fix its list of problems, which have been blamed on road salt and electrical interference from nearby wires among a list of other factors. The railway recently appointed its former COO, John Marginson, to lead local efforts to fix these problems.

Since the report of the latest malfunction, all has been relatively quiet through Barrhaven, although the animosity lingers and likely will for some time. 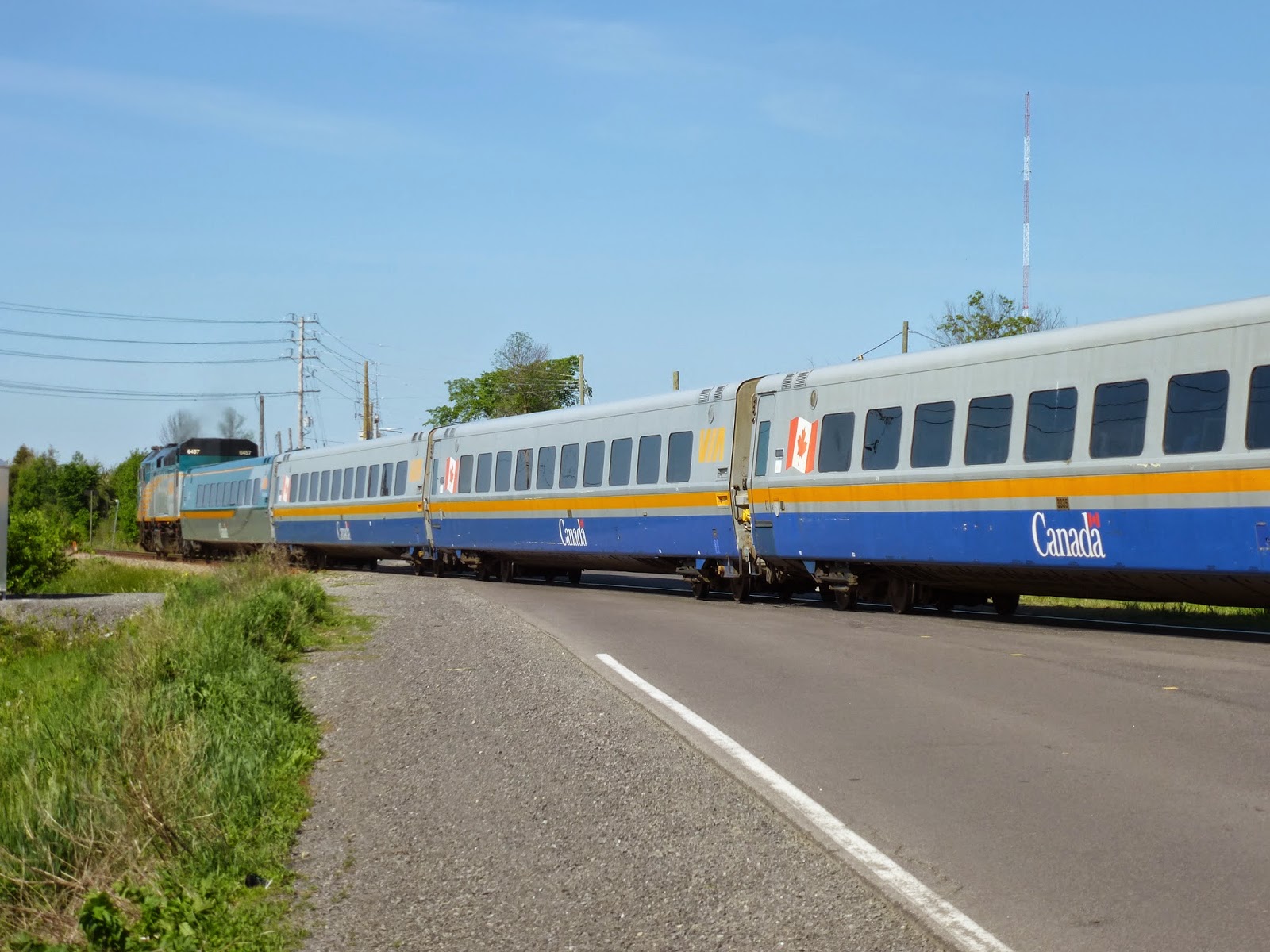 Via Train 643 gears up as it crosses McKenna Casey Drive on June 1st. ﻿
Since Via's leadership change and the appointment of John Marginson, the situation has improved, especially with the company's relationship with the city. However, when residents hear that crossing equipment failed because a train was moving too slowly through the crossing, as was the explanation in several media reports this time, the collective patience in Barrhaven seems to be wearing thin.
From the Ottawa Citizen, May 29th:
"Via tweeted saying the mishap occurred because the train was moving too slowly through the automatic warning device zone."
This line hosts both faster passenger trains and the occasional slow-moving freight trains. A train moving too slow through a crossing? That seems like a weak explanation to me. But, as I have mentioned before, I am not a technical expert, so I will reserve further comment.
Most here believe that the time has long since past to straighten out this mess. We have seen significant progress of late, which has raised expectations that these problems will soon be solved. One can only hope.
﻿
Posted by Michael at Thursday, June 12, 2014
Email ThisBlogThis!Share to TwitterShare to FacebookShare to Pinterest
Labels: Barrhaven, collision, crossing signals, Fallowfield, OC Transpo, Ottawa, rail safety, railways, Smiths Falls Subdivision, Via Rail

Hello Michael. My name is John Marginson. Yes, the same guy you refer to in your piece (note the correct spelling). I will contact you directly to update you on VIA's actions and the very good progress that we have made to date. I should correct one error that you have pertaining to the incident of May 29th. In this case, a road vehicle stopped too close to the Fallowfield crossing while a train was approaching and the crossing gates were lowering. One gate hit the vehicle that caused a failure alarm with the crossing system. This location had to be inspected following this incident to ensure that the gate was not damaged. It is possible that the resident saw this inspection activity. We have also had cases where residents mis-identify Fallowfield with the Woodroffe Avenue crossing where flagmen are present for every passing train. John Marginson

Thanks for your comments, John. My apologies for misspelling your name. I have made that correction. I find your explanation interesting. It certainly does differ from how the incident was reported in the media (and me by extension) and sheds new light on the situation. Thanks for the update.

Michael, I can't seem to find your email address or any other way to reach out to you directly on your profile page or blog. If you wish to communicate further, send an email to mylene_belanger@viarail.ca who will forward your address to me and I'll send you an update. John Marginson

Are people demanding under/overpasses yet?

Bryan -- There has been a plan on the books for underpasses for many years, but the city has never followed through. Many, including the former mayor Bob Chiarelli, have repeatedly said the underpasses need to be constructed here. I don't see it happening.

Wait, we get our overpass in Kingston first :) The Counter Street overpass is slated for construction as the next phase in the John Counter Boulevard reconstruction, widening and upgrading. This crossing is very busy, involves a double-track mainline here on CN's Kingston Sub, and deals with 50-60 high-speed VIA (some non-stop) and mammoth CN freight trains.

I'll say one thing, Michael:
You get the ear of VIA. I can't even get them to return my emails, but you've got them wanting to contact you directly! Well done!