I come by my love of railways honestly. Both my grandfathers worked for the Canadian Pacific Railway. All my uncles worked for the CP in their teens while one worked for Via later in life at Union Station in Toronto. My Dad told me that he often used to clean out the RDC Budd cars that Canadian Pacific used for its passenger service between Windsor and Toronto. He said he often found money and booze. My cousin works in the industry as well. Ever since I was a child, the railway has played a role in my family.

Which leads me to what is perhaps my favourite photo of my grandfather, Paul-Emile (below, second from right). He was born into a large French-Canadian family in St-Fabien, Que., in the Rimouski region. After leaving home in his teens to become a lumberjack as a way of supporting his family, he found his way into a railway job. For close to half a century, he worked for the Canadian Pacific Railway as a rolling stock mechanic, first in Chapleau, Ont. and then in Windsor, Ont.

The photo below was taken in the 1960s or early 1970s at the site of a derailment in Ridgetown, Ont. For years, this photo hung in the kitchen of my grandparent's house in Windsor with the inscription "Life on the tracks." My grandfather had impossibly large hands from a lifetime of working on these big machines. Even in his 70s and 80s, he could squeeze your arm (jokingly) and it would feel like a pair of vice grips. As I grew up, many in the family said I looked like my grandpa, which I always considered a compliment.

This photo was the source of a family myth for years. My grandpa never talked about the photo, but others in the family guessed it was taken in Northern Ontario, when my grandpa worked in Chapleau, which was a major servicing point on the CPR for years. It wasn't until my grandpa passed away in 2008 when we were told by a former co-worker at his wake that the photo was actually taken in Ridgetown, in southwestern Ontario.

Given the recent tragedy in Lac-Mégantic, Que., I don't want to make light of train accidents, but am happy to share that this one was a minor accident and the only casualties were the rolling stock and track, as you can see behind the trackside gang. 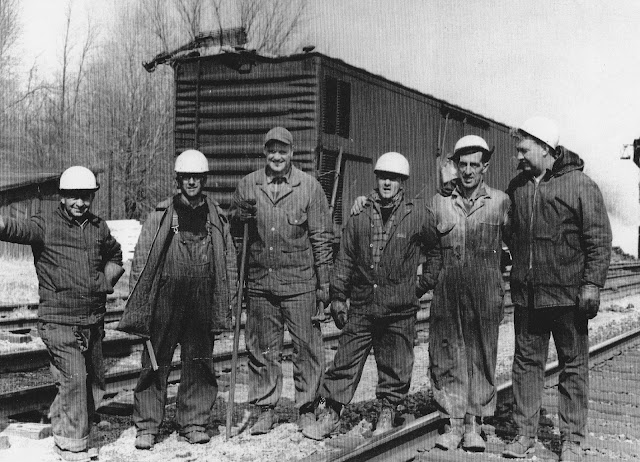 The next photo is a shot from the 1950s when my grandfather (back row, right) took his family to Padoue, Que. (near Rimouski as well) where much of his family lived. My father Georges is front row, left, while my grandma Imelda is back row, left. I love this photo because it is quintessentially Canadian. It could have been taken at any small town anywhere in Canada in the 1950s and the chances are, there would be a railway station and families on the platform. Padoue still has but a few hundred souls, but it had its own train station in the 1950s. Imagine that. How times have changed. 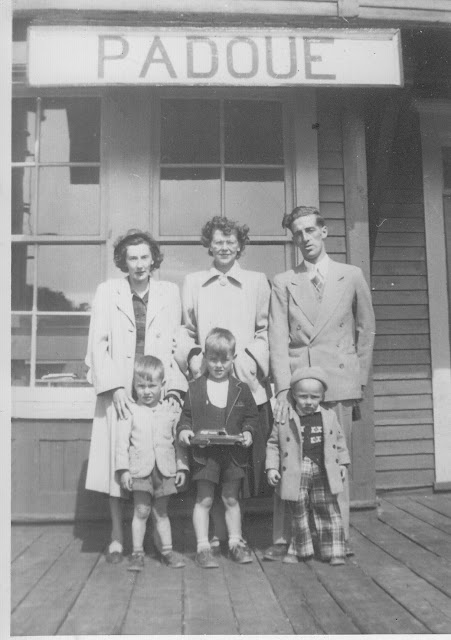 Below is a photo that continues the family tradition. My father took this photo of my siblings and I in front of former Canadian National steam engine 5588, dubbed the Spirit of Windsor, in front of the old Windsor rail ferry. I am in the front row left while my brother is beside me. My sister is in the back row right next to her childhood friend, who is trying to keep me still for a photo. The shot was likely taken in 1980 or 1981. You can just make out the Railbox boxcar behind (Next load, any road!). It was around this time when my grandpa first brought me to the Windsor rail yard and took me aboard a locomotive for the first time. I still vividly remember when he showed me how an engine worked. 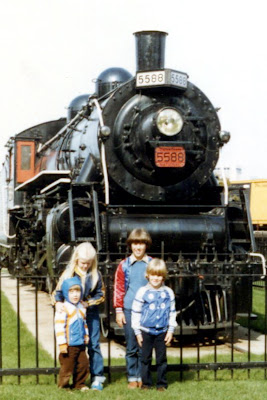 And the tradition continues with my nephew and godson, Daniel, as he marvels at the passing of a CSX freight train headed for the Chemical Valley in Sarnia a few weeks ago. My sister told me that the train had stopped on the main line, which runs by the edge of their property. My nephew ran to the back of the property to watch the idling train until it eventually trundled off on its way to Sarnia. I wonder if my year-old daughter will share my passion when she grows up. She does like it when I fire up my little N-scale train set in our house, so there's always hope. 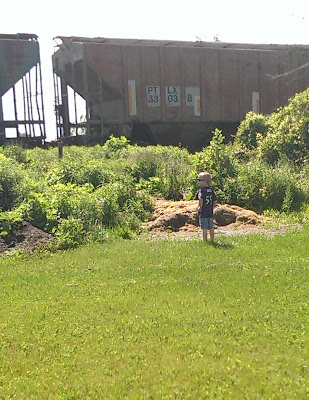 Thanks for sharing these memories, Michael. Here I am with my two siblings, in front of another CN steam engine:

The fellows look to be in front of a CP mechanical reefer.

Looks like you're right, Eric. I think this car was likely put back into service fairly quickly since only the top looks to be any worse for wear.

I just found your website today. I work for a local historic society in Padoue, Quebec. Your website is very interesting. I would like to know, do you have more photo of Padoue?

If you are interested, here a Facebook Page about History of Padoue, Que : https://www.facebook.com/ComitePatrimoinePadoue/ You will find may old photos of Padoue, others of the Station, etc.