In the last two years, I've managed to snag a fair number of wrapped Via Rail locomotives and coaches, as the railway celebrated Canada's 150th birthday and then its own 40th anniversary. At the very least, these wraps really did give me a reason to be trackside to document Via Rail trains, especially at a time when it was hard to find the motivation to shoot yet another corridor consist.

Allow me to explain a bit. Since I see so little railway action other than Via Rail in Ottawa, my desire to take pictures of Via trains has greatly diminished over the years. Call it a case of familiarity breeds contempt, although I don't have contempt for Via by any means. The best way to describe it is boredom. There's only so many different ways to shoot a three-four car consist with a F40PH-2 or a P42 on point.

Recently, on St. Patrick's Day, I found myself with a bit of time on my hands, which has been a rarity in the last year or so. I decided to head over to Fallowfield Station to shoot an incoming westbound train that was headed for Toronto. Checking the schedule, it looked as though a westbound to Toronto and an eastbound from Toronto were both due to be at Fallowfield at roughly the same time, which at least had me thinking of shooting two trains at once. In my years at Fallowfield, I have never once seen a train on the siding.

And, sadly, that streak remains intact as the eastbound did not show up at its appointed time. The Toronto-bound train was a minute early so I decided to set up and get some shots, just to keep my photography skills (such as they are) sharp. To mix things up, I set up on the west side of the station, which meant I would be shooting the westbound train from the far side of the platform. I did this on purpose as I wanted to get some platform and boarding shots. 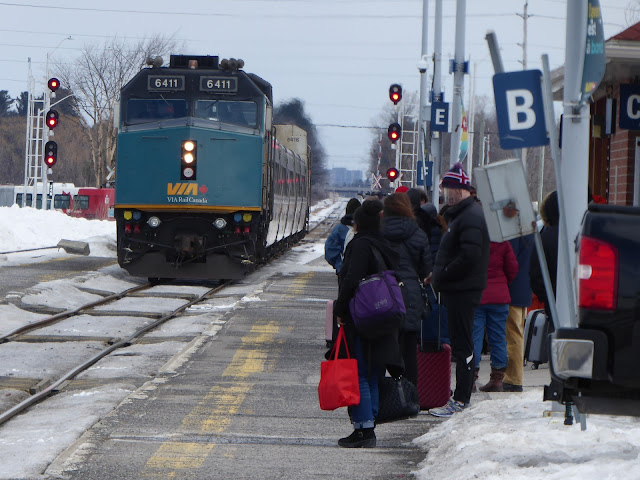 The train that showed up was a double-ender, with two F40s on either end. The coaches themselves offered no wraps, but I was happy with the boarding scenes I did catch. All in all, it was a different style of shot than the ones I usually get of westbound trains, which I mostly shoot from the east side of the station platform. Here's an example below. 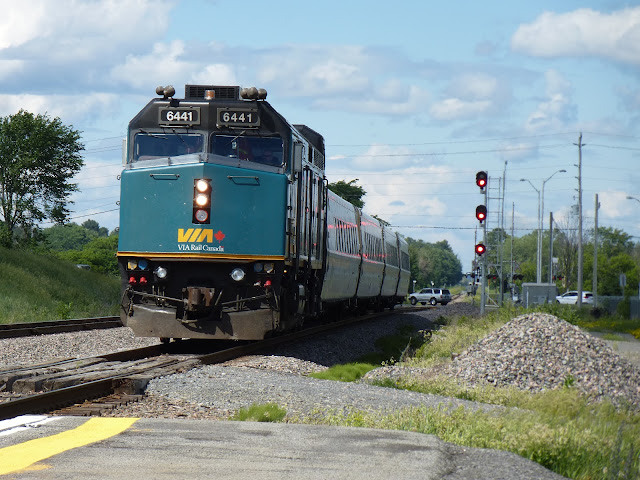 The real treat for me was when the train continued its journey westbound. On the other end of the train was a wrapped F40 from the anniversary series. I was really happy with this shot below, since the sun was in an interesting position and the sky offered a great splash of colour on a windy, cold afternoon. 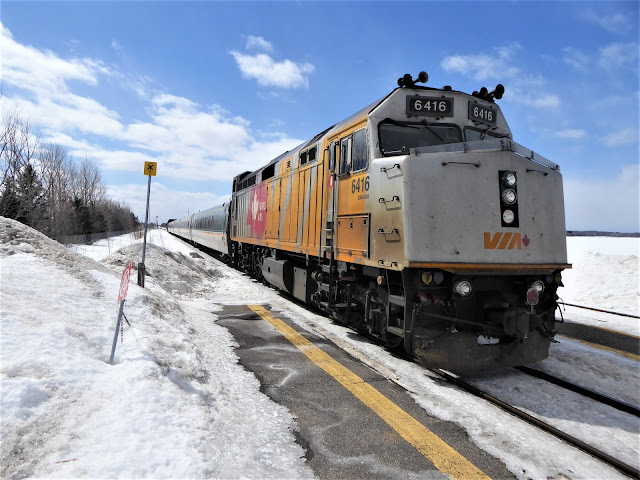 This was the first wrapped F40 that I have captured in the last two years. To be honest, it was the last major to-do I had on my list of Via Rail images I wanted to add to my collection. So, it was a profitable afternoon, all in all. I took another shot down the tracks, with the trackside signals near Fallowfield Road in the shot. 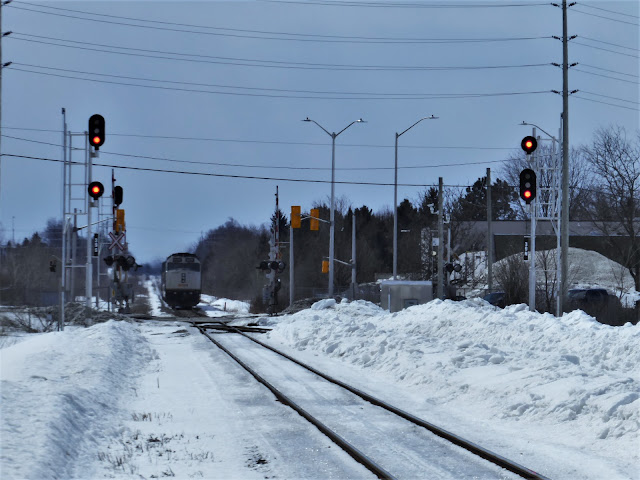 After my brief meet with CN 589 earlier in the week, complete with a GATX leased geep on point, I would say that it was about as prolific a week I've had railfanning in Ottawa in some time.

And since Via Rail is about to retire much of its corridor fleet in the coming years as the Siemens Chargers and coaches are about to make their appearance, maybe these mundane meets will become much more valuable in the future.
Posted by Michael at Thursday, April 04, 2019
Email ThisBlogThis!Share to TwitterShare to FacebookShare to Pinterest
Labels: F40PH-2, Fallowfield Station, LRC, Ottawa, passenger trains, railfanning, Smiths Falls Subdivision, Via Rail, wraps

I'm still advocating for an east end adventure for you!

There are eastbound and westbound Via meets every night in Carlsbad Springs about 6:45. If you stake out the crossing on Hall Road just south of Russell, you'll be rewarded as both trains cross within minutes of each other, and they're throttling up to boot!

Please let it be 6:45 in the evening! I have some time coming up (knock on wood) so I'm hoping to find new places. I am even planning a short railfan daytrip outside the city (gasp) which has been on the agenda for more than a year.

I like that wrapped shot as well! Great composition.

Thanks for the comments, guys. I will try and see if I can catch a meet at 3 pm one of these days. That was supposed to happen on Mar 17 when these photos were taken, but it was not to be.