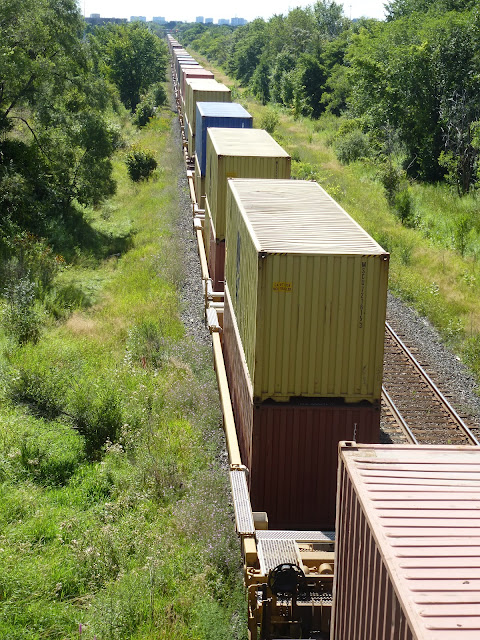 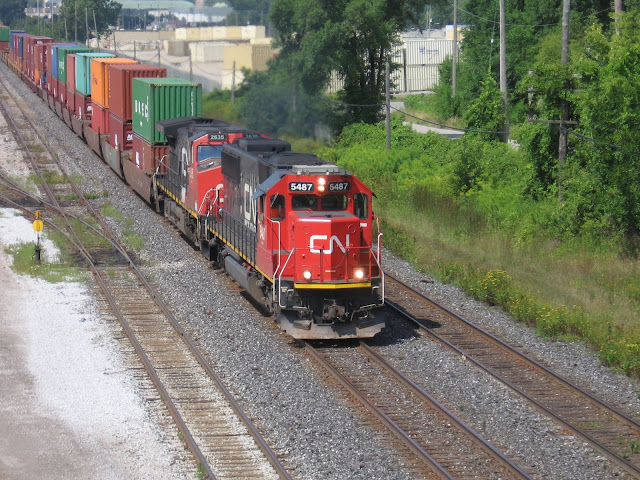 I think it would take years of prolonged traffic problems before anything is done, and even then, it will just be wider roads.

Sadly, Ottawa lost it's rail link to the west when the Beachburg Sub was pulled up from Pembroke. I think very little of the Chalk River Sub west of Arnprior has been repurposed as anything other than a trail, so it would have made sense to keep it, but this idea died too when CP pulled up the tracks. Lack of vision on their part, at least in my opinion, however the cost to rebuild this network is so huge that it will never happen.

Maybe the Moose Consortium has some ideas, although that group seems to have pretty lofty aspirations that really don't make a lot of economic sense in the near term.

We can hope for more frequent freight movements from Montreal, but like you said, there is no intermodal facility in Ottawa, and the cost to build it for only 1 warehouse probably wouldn't make much sense.

Can't argue with any of your points, Keith. I don't want to rain on anyone's parade, especially since this will be a great thing for the east end of the city. I just foresee lots of problems with truck traffic overloading Boundary Road when it seems to me that maybe some movements from Montreal via rail would ease the burden a bit. But, as you say, there is so little infrastructure to support any rail freight in Ottawa.

Unrelated but perhaps you could shed some light on a recent train I spotted. Saw a Fallowfield bound CN freight on Wednesday morning at 9 20 am going through Richmond with seven cars. Some Potash and others box cars. Perhaps a new run? Just curious

I've occasionally seen Potash cars sitting in Walkley Yard over the last year so that might be related to what you saw. Perhaps it was destined for Synagri (who is apparently a fertilizer producer).

If you look back and search Potash and Bechburg Sub in Google, you will see that CN regularly delivers Potash covered hoppers to SynAgri during the appropriate seasons. I've mentioned this in the past. If you saw a freight heading toward Richmond on Wednesday, you likely saw a combined CN 589 run. Readers in the past have seen CN operating on the Smiths Falls Sub on Wednesday, which is the same day it runs out to Arnprior via the Beachburg Sub/Renfrew Sub to deliver caprolactam to Nylene Canada. Thanks for the updates!

It should also be noted that Amazon recently closed its engineering shop in Ottawa.

I can only dream of a day when all the truck traffic goes back to railways. Or when containers are used fully multimodally between trains and trucks. If there was ever an ideal candidate for this, it would be Amazon. Not having infrastructure in place probably works against my dreams! I'm going back to sleep now.
Eric

VIA owning the Alexandria is a hurdle to increased freight transportation. CN will likely have no interest in having a terminal for containers in Ottawa with Montreal so close.

Even with that, I don't know whether Amazon has a contract with CN, CP or both. If it's CP, it doesn't even matter.

I am on the same page as you are - this is definitely going to make the truck problems worse. I know locals downtown hate it and being related to many drivers who have to drive through there, they hate doing it too.
The sad reality is that the truckers are the ones who are blamed and will be blamed when the street cars are up and running and there is no reduction in traffic on the 417. In reality, most traffic is already coming from the far reaches and the street cars are simply a nuisance. If anything traffic is set to get worse. It also doesn't help that there is no proper ring road like in every other major city on the continent. Let's face it, if your running trucks from boundary road to say Carleton place, a ring road makes for that much less traffic on the 417.

Anyway, I was fully expecting and not surprised that Amazon put a warehouse in the city somewhere. As we all know, Shopify is homegrown, HQ'd downtown and a direct competitor. Amazon had to put something in their back yard. If I was running the show there, I would 100% have done the same thing. I know the trucks offer much needed flexibility, but its too bad they couldn't pay for a spur to the warehouse....