All about the Baldwins

As I mentioned in my first post about the Walt Disney World Railroad, I recently was able to get a behind-the-scenes tour of the tourist line, which operates on a small loop around the Magic Kingdom in Florida. There are a number of interesting items that make this little railway worth checking out, if you find yourself at this theme park. 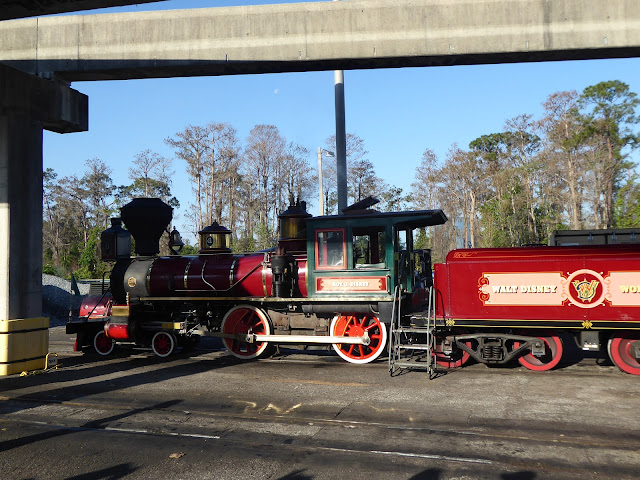 I was most fascinated by the four steam locomotives that power the five-car trains that shuttle park goers to various parts of the Magic Kingdom throughout the day. The locomotives are not specially built reproductions, as some might expect. They are real steam locomotives that pulled revenue freight in a former life before they were purchased by Disney and modified (significantly, in some cases) to pull trains at Disney World.

Here are some interesting facts about these locomotives that I was able to discover during the tour.

1. Each of these four narrow gauge steam engines is named after someone significant to the Disney empire. The 4-4-0 engine pictured above is the Roy Disney. Roy, who was Walt's brother, and did not want an engine named after him. The honour was bestowed after Roy died. The other three are named after Walt Disney (4-6-0), Disney executive Roger Broggie (4-6-0) and Lillian Disney (2-6-0 officially known as Lilly Belle).

2. Despite their appearance, the company boasts that each of these steam engines contains 80 per cent original parts. The asterisk next to that claim, however, should mention that the locomotive boiler is each is considered a part. And each of these engines has a new, smaller boiler compared to when they served as freight haulers in Mexico. 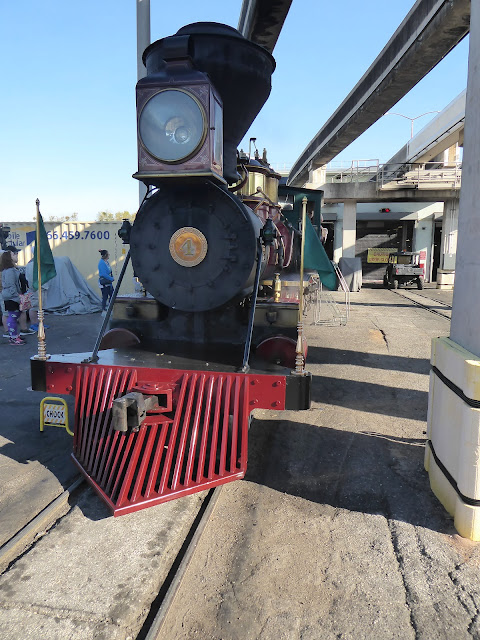 3. All of these locomotives was built at the famous Baldwin Locomotive Works in Philadelphia between 1916 (Roy Disney) and 1928 (Lillian Disney). Interestingly, the railway's two 4-6-0s, the Roger Broggie and the Walter Disney, were built side by side and numbered consecutively by Baldwin in 1925. They ended up being sold together and served together before they were restored together.

4. All of these locomotives was used on a narrow gauge railway that served sugar cane plantations in the Yucatan region of Mexico. They were purchased by Disney from a scrapyard in 1969 for $32,000. The purchase price included another steam locomotive (which was deemed unfit to be saved) and various spare parts.

5. Their top speed in 20 miles per hour. Although they can reach this speed, they rarely go this fast. Our tour guide told us they begin to complain and shimmy when they are pushed to their speed limit. 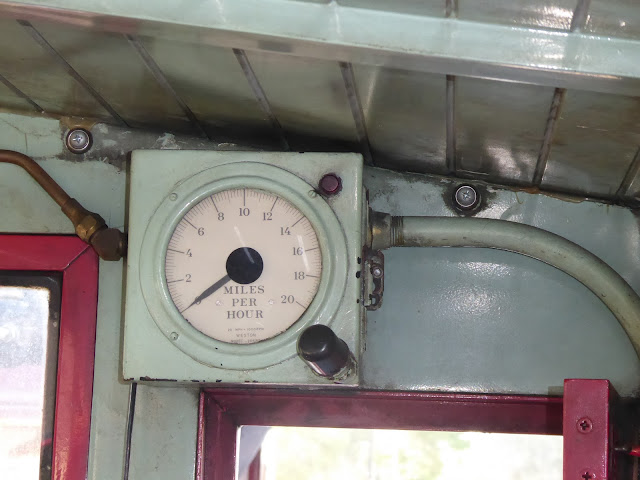 6. Of the original parts on these engines, these do not include the builder's plates, like this one on the Roy Disney. These plates are reproductions. 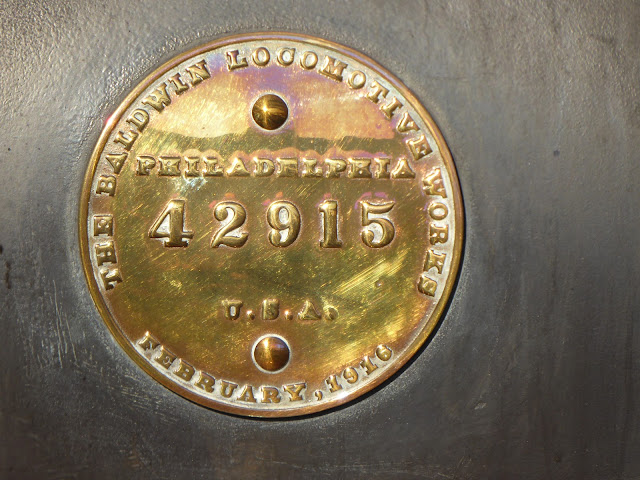 7. What's in the tender? These locomotives have been modified to burn low-sulfur diesel fuel, which feeds the fire that produces the steam. The tenders themselves are reproductions, although they run on the original trucks that were on the original tenders. 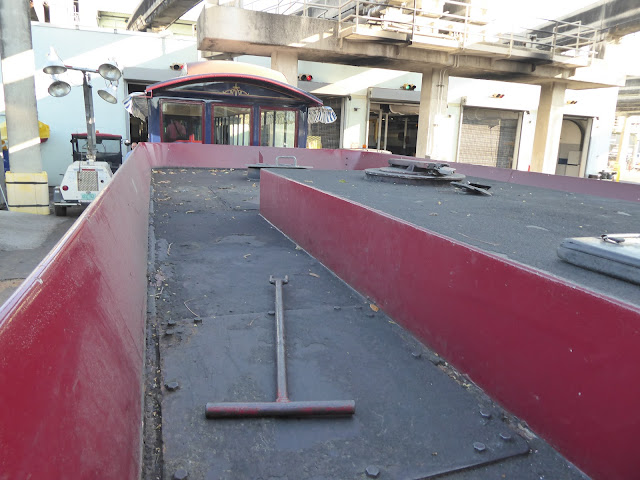 View of the top of the Roy Disney tender, as seen from the cab of the locomotive

8. This is just a personal observation, but I have to admit that the cab of a steam locomotive is a lot warmer than I thought it would be. I'm not sure what exactly I was expecting, but I was surprised by how much of the heat from the engine's fire bleeds into the cab. This would not make this cab all that comfortable in the summer. 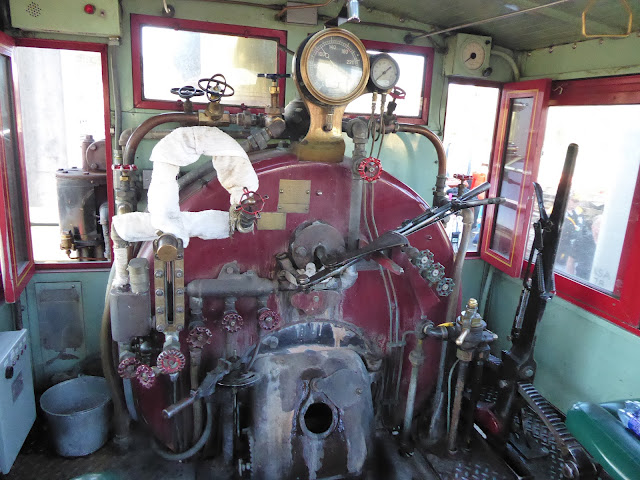 9. The railway almost always has two locomotives operating at one time, although it is able to accommodate three trains on its two-mile loop at a time, provided they all travel in unison between the railway's three stations. The day I visited the roundhouse, the Roy Disney and the Lilly Belle were operating while the Roger Broggie (visible below) was in the roundhouse, as was the Walter Disney although I could not see that 4-6-0. 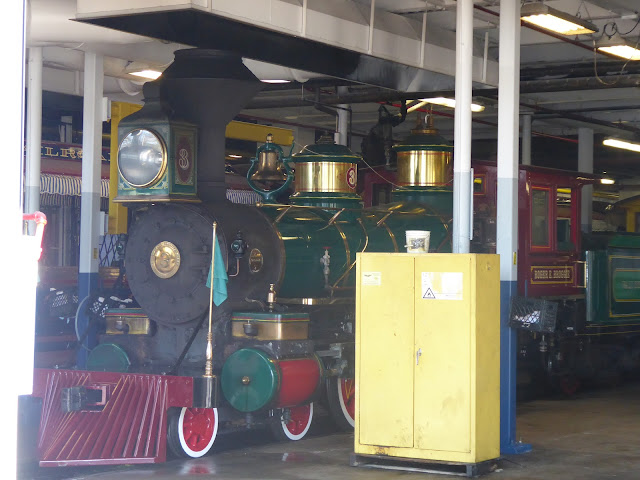 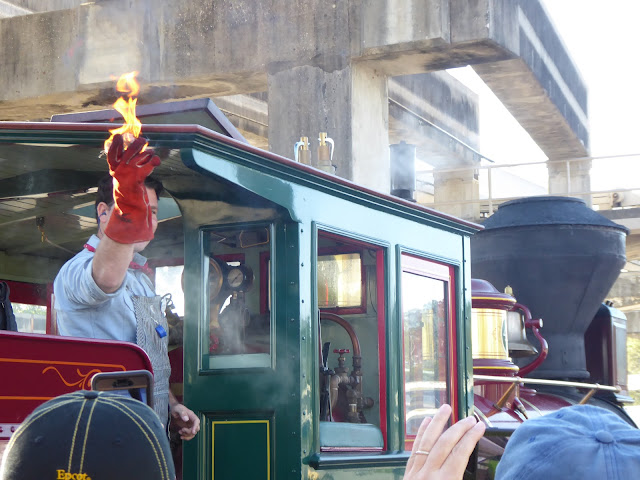 This is where the magic happens. The fireman is about to fire up the engine. The initial steam test is something you have to see to believe. 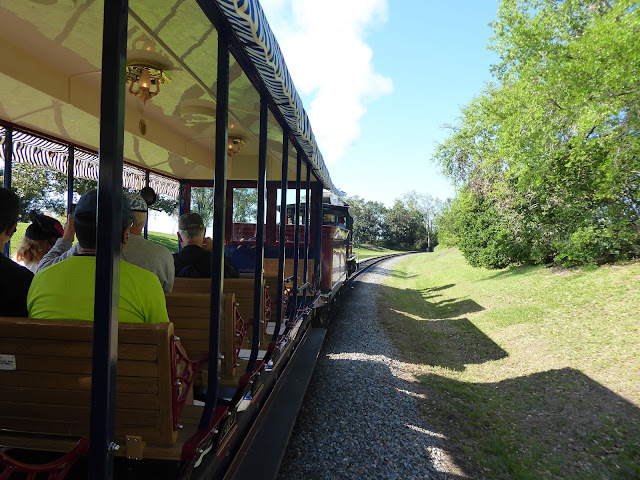 As I mentioned in the first post about this railway, I am not a Disney fan. There are other railways that are no doubt much more interesting to a railfan, but this railway has much more than meets the eye. If you find yourself at Disney World and you're not exactly a Disney person (like me), make the most of it and discover this railway. This company really respects rail history.
Posted by Michael at Saturday, April 21, 2018