Havelock: The railway town, the subdivision, the history

This post is the fourth in a rail history series I intend to extend through 2017 as we celebrate Canada's 150th birthday. Click the links to read the first and second  and third rail history posts.

Havelock, Ontario is still a railway town, despite it all. The village, which sits on the easten edge of Peterborough County, has always been closely tied to the railways for its entire history. In the last thirty years, the fortunes of the rail line through the village have waxed and waned. Unlike other remote villages that have lost rail service, Havelock’s railway might actually have better days ahead.

Today, the town’s railway operations still reflect the past and present in a relaxed pastoral setting.

I have passed through Havelock countless times, mostly in 2003 and 2004, when I lived and worked in Peterborough. The village’s railyard, which is operated by Canadian Pacific subsidiary the Kawartha Lakes Railway, still serves as a steady railway presence for the area, which is on the edge of both Eastern and Central Ontario.

For railfans, the railyard is an easy place to take in some action. Even without any activity in the yard, there is much to see. The village’s former railway station, a designated heritage site, has been preserved since it last served as a passenger station in 1990. The station has housed a restaurant since 2004. Former CP Rail caboose 434700 has sat on the side of Ottawa Street (Highway 7) for years and is fully preserved. 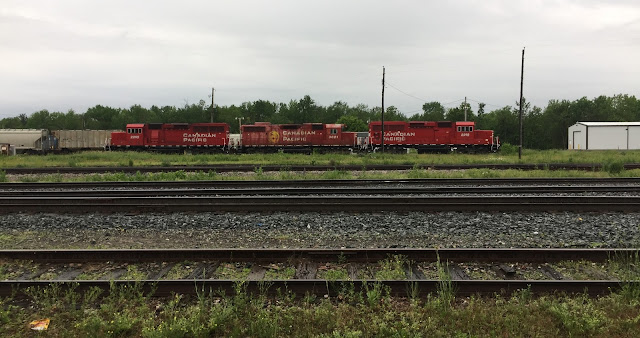 Two GP20ECOs bracket GP38-2 3021 at Havelock Yard near the end of the Havelock Subdivision. Check out the faded golden rodent in the middle!

The yard itself still sees regular activity as Havelock is the junction between the Havelock Subdivision and the Nephton Subdivision. The Nephton Sub is critical to the Kawarwtha Lakes Railway, since it connects the railway’s main customer, Unimin, which mines nepheline at the Blue Mountain mine, about half an hour north of Havelock. Nepheline is a mineral found in igneous rock. The mineral is a key component in plastics, fibreglass, ceramics and glass. So, it's not uncommon to find covered hoppers in this area, obviously.

The Kawartha Lakes Railway regularly uses GP20ECOs and other geeps on both subs and in the yard. In the past, SW1200s were used for local service in Peterborough (due to their ability to handle the tight curves of local spurs) while GP9s were used along the rest of the line.

Havelock Yard in late June. Note the old Boston & Maine covered hopper. Covered hoppers are common in this yard as CP subsidiary Kawartha Lakes Railway serves a nearby nepheline mine and now serves area businesses by delivering carloads of roofing granules that are loaded onto trucks.

I recall many a time working at the Peterborough Examiner in the evening and watching Toronto-bound nepheline trains rushing through town, led by GP9s. Our newspaper's property went right back to the tracks, so passing trains were always a neat break in the evenings.

But back to Havelock.

Havelock has long tied its fortunes to the railway. Rails were originally laid through the area as part of the Ontario and Quebec Railway, which became part of the Canadian Pacific Railway in 1884. The line through Havelock originally connected Toronto with Perth and was used as a passenger connection to Ottawa (via the Havelock Sub connected to the Belleville Sub at Glen Tay and that Sub linked up to the Smiths Falls Sub, which stretched through Smiths Falls to Ottawa). 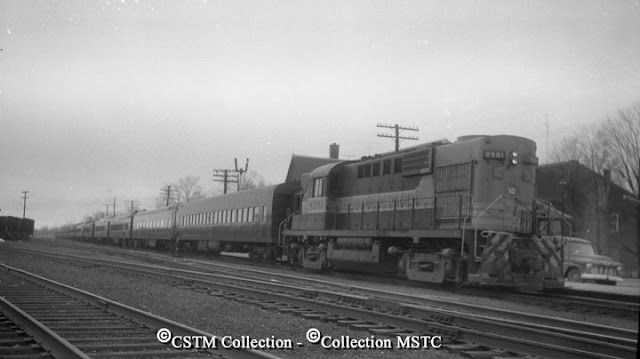 Canadian Pacific passenger train heads west out of Havelock en route to Peterborough and Toronto. This shot was taken six years before rails east of Havelock were torn up. At one point, this sub extended all the way to Perth (Canada Science and Technology Museum archives).

Via Rail discontinued service over the Havelock Sub in January 1990. At that point, through service to Ottawa had long since been discontinued. The section of the sub from Glen Tay (Perth) to Tweed was abandoned in 1971 while the section from Tweed to Havelock was scrapped in 1988. 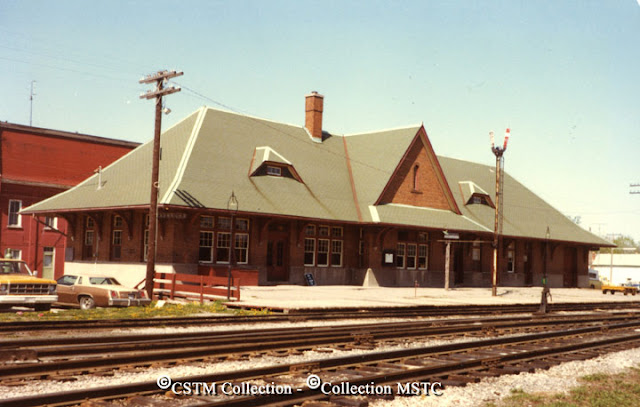 Havelock's passenger station as seen from Havelock Yard. This station has been preserved and serves as a restaurant (Canada Science and Technology Museum archives).

Since passenger rail was scrapped on the sub, there has been a steady push from some to re-establish passenger rail operations on this line, which is bolted rail. The latest serious push for passenger rail happened in 2008 when Peterborough’s MP Dean Del Mastro led efforts to have Via Rail establish RDC service between Peterborough and Toronto. There was a commitment from Ontario and the federal government to contribute $150 million to upgrade the line for passenger service.

The plan fell apart when Via Rail studied the feasibility of passenger rail operations on the line and found that the service would lose $2 million annually. Local rail proponents had estimates that wildly differed from Via’s assessment and continued to push for Via or Metrolinx service on the sub. Metrolinx estimated it would cost $541 million to equip the line for commuter trains. At one point, local proponents wanted to buy the Havelock and Nephton Subs from CP and contract the railway to continue freight operations. The idea was to get a cut of the freight revenues from KLR to help establish passenger rail on a solid footing.

So, that was the end of it, right? Well, not exactly. For reasons known only to Via, there have been more recent efforts to study the feasibility of passenger rail along the Havelock Subdivision. These efforts have included looking at reacquiring land between milepost 90.8, east of Havelock, and the old junction with the Belleville Subdivision in Glen Tay (Perth). You may recall Trains Magazine explored this idea in a recent story it ran about Via Rail’s uncertain future. This section of the old sub is now part of the TransCanada Trail.

Having passenger rail on the Havelock Sub would at least solve capacity issues for Via Rail between Toronto and Montreal and Ottawa, where it has to contend with the busy freight demands on CN tracks. However, it also raises a question. Which communities are crying out for Via Rail service along this more northerly line? Other than Peteborough, the Havelock Sub mostly passes through small towns such at Norwood and Cavan. I suppose the idea Via is considering is establishing an express route between Toronto and Ottawa, which would supplement current service that serves larger communities along Lake Ontario. That’s just a guess on my part.

Whatever the future holds for this old rail line, it seems at the very least that the days ahead won’t be dull.
Posted by Michael at Thursday, June 29, 2017

Thanks for the interesting post! I've driven through Havelock along Hwy 7 and stopped at the station to look around many times over the last 45 years. There's always something to see for the railfan. Have you considered a post about rail around Marmora?

Interesting - love the details you provided and the old photos. I've never been in the area but it's a good reference for those who are. :)

Thanks, gents. I really do love this rail line. I only wish I was in the habit of photographing trains when I lived in Peterborough. JD - Marmora sounds like a great idea. I always loved driving through there when I travelled the 7.

Thank you for an interesting post! I know the Havelock Sub well, having grown up south of Burketon, which is between Mytle Station (west) and Pontypool (east). The freight trains and commuter trains (both CP and VIA) are fond memories for me. The commuter train was an easy way to get to Toronto instead of catching the GO Train.

Thanks, Andrew. I know roughly where you are, given my time in the newsroom at the Peterborough Examiner, back when it was located on the Queensway right by the tracks. It's a shame that no one has been able to find a workable solution for passenger or commuter rail in the Peterborough area.

Good eye for spotting the ex-B&M covered hoppers. Those pop up regularly online as photographers ask themselves, "Are those Boston & Maine that I just photographed?", me included!

We only made it to Havelock once, but the operation seems to have longevity!
Eric

Iko has a plant just east of Marmora and trucks over the roofing granules for loading into covered hoppers. The old B&M cars are used for this. Currently it looks like iko and unimun provide about the same amount of traffic.. approximately 20cars each per trip to Toronto. Iko also loads cars on CN just north of the Belleville yard.

I saw that exact locomotive lash up in Peterborough last month! Great post. If anyone would like to see me post frequent and up to date pictures of this line and wants to ask me questions about it and the traffic, follow me here @canadian_railway_photography on Instagram:)

Cameron -- I will definitely check out the feed. I am fascinated by this line. I wish I had photographed trains along this line when I lived in Ptbo.

Sunday November 19 2017 I was absolutely shocked to encounter a freight slowly chugging northeast up the line headed with three GPS and pulling grain type hoppers. Was heading south on the Darlington Manvers line over a unguarded crossing just north of Mosport and slowed to check (should of stopped) and glanced to the west and seen the three headlights about a quarter km west of the crossing and moving slow. This has got to be the first traffic I have personally seen in twenty or twenty five years.—Jim Tamblyn Oshawa!

I do live in the area. I love the Belleville sub and the CN Kingston sub, but seeing trains on this old historical line is just so much better. From what I heard from a friend who works on the line, a possible new contract is (maybe) being made to extend the track a couple miles east again to Kawartha ethanol. They want corn scraps in the plant and tankers moving crude liquid out.

In just a few years, just imagine the new Siemens Charger train sets recently purchased by Via Rail running on a completely refurbished, passenger train-purposed, dedicated-tracked, former Ontario-Quebec Railway line, at maximum speeds of up to 110 mph or 177 kph as part of the full Toronto, Ottawa, Montreal and Quebec City HFR project!

Passenger rail enthusiasts, including communities such as Havelock and Peterborough, Ontario, really look forward to that day since this project will provide an affordable, more environmentally-friendly, faster, more relevant, reliable and safer travel choice to Canadians!

In 1969 I used to take the Day Liner from tronto to havelock It was roughly 10,00 dollars, The station I would like to see some history is the stop after havelock was Bonarlaw where cp and cn crossed each other, Before that it used to called Belleview and on to Ivanhoe and Tweed, I would guess that this pandamic took away a lot of our goverments money,