Thank you for four years

Two hundred and seven posts later, I have reached four years with this blog. Rather than spend too much time on a victory lap, I wanted to share a few words of thanks to everyone who has happened to stop by the Beachburg Sub. 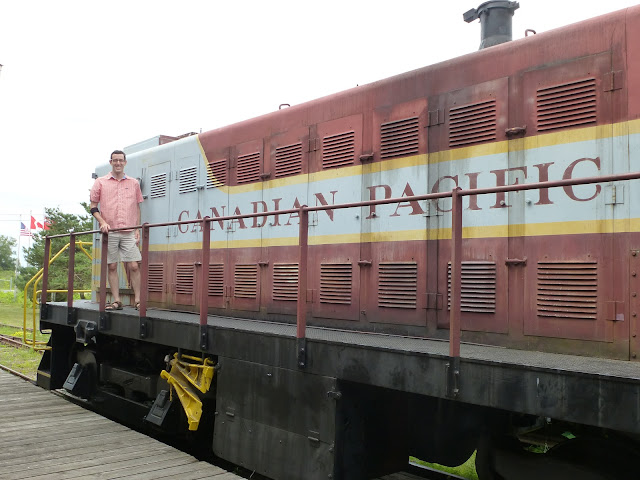 Let's be honest. Without any readers, how long can a blog last? I don't know if I would have stayed with the Beachburg Sub as long as I have if not for everyone who reads, comments and shares material with me.

This has been the biggest surprise for me. Not only are my readers as passionate as I am, they are also quite generous with their time and resources. I can't tell you how much I appreciate everyone who has contributed guest posts, shared links, sent me photos and relayed information about operations both here in Ottawa and elsewhere.

I have had a lifelong passion for railways. The industry is in my blood. I am also a fierce advocate of railways, especially here in Ottawa. I'd like to think that we have done our little bit to bring about a small revival of railway fortunes here in Ottawa. After all, we now have a solid rail future for the Prince of Wales Bridge, we are on the cusp of the Confederation Line's grand opening, the Canada Museum of Science and Technology is expanding its railway pavilion (Well done, Bytown Railway Society!) and we might possibly see the Hull-Chelsea-Wakefield Steam Train operate again. And it appears we have a solid lead on the Arnprior Local!

Things couldn't be better, at least for now.

In all seriousness, thanks to everyone for following along and indulging me.

Congratulations on 4 years! You've carved out a unique niche and your passion for railways shows through on every post. Keep it up!

Keep up the good work!

I still think you should try to make it out to the east end some time. The Alexandria Sub parallels Russell Road for at least 2 kms. There is also a siding (hidden from the main road but accessible from a side road) with at least 1 Via meet daily, if not more.

Thanks Keith. It means a lot. I would really like to know when it would be a good time to shoot the Alexandria Sub. I have wanted to shoot near Carlsbad Springs for a while. There are some great stretches there. I didn't know about Russell Road. Any info that anyone may have about train frequency or rough train times on the Alexandria Sub in the east end would be greatly appreciated. I would imagine catching any of the CN runs to and from Coteau would be worthwhile.

There is a daily (weekday) westbound Via that passes through Carlsbad around 4:50 PM. There is another one that passes through about just about 2 hours later. This is the train where there is a meet with an eastbound and I believe the WB typically uses the siding. The last WB comes through Carlsbad between 8:50 and 9:00. I look at the Via timetables for departures and arrivals from Montreal periodically to figure it out.

As for the CN freight that uses this sub, it's pretty sporadic as far as I know. I've seen it maybe 4 times since the new year, usually heading WB and sometime around 5:00 is when it goes through. It can be as long as 15-20 cars long depending what's being moved in for storage. I don't really think it has much of a schedule though, and I'm not sure where or how to figure it out.

Looking ahead, I can definitely say the next few posts will be looking back! Thanks, Eric.

Well done. I can't believe it's been 4 years! It's been fun checking in and seeing what tidbits and information you've dug up. Definitely been a great read and you should be very proud of what you've built in this blog! If this is what you've done in 4 years, I am excited to see where the next 4 take you.

Ty Keith - I will definitely be using this to check out sometime in the summer when I get a few mins away from work/school.