Cedarview Road and other winter observations

I was reminded the other day of how much fun it is to shoot railroading action in the winter. Fellow Ottawa railway blogger Dave M of Ottawa 589 passed along some shoots he took of the Arnprior local heading out to Nylene Canada on its weekly Wednesday run. He graciously invited me to join him, but I was unable to go, but he did plant a seed. I was inspired the following weekend to head out and get some shoots of Via's morning 643 train to Toronto, which passes through Barrhaven at about 9:30 a.m after it leaves Fallowfield Station.

Those who read this blog know that I often take shots at the McKenna-Casey Drive level crossing, but on this morning, I decided to try a new spot on Cedarview Road. Those familiar with west-end Ottawa know that Cedarview Road's northern stretch ends at the Smiths Falls Subdivision, before Cedarview South continues through Ottawa's rural hinterland. Once you arrive at the cul-de-sac, you can park your car and make your way to a spot right next to several evergreen trees. Once you slip past them, you can find a good spot next to the security fence where you can get a nice long shot of the tracks. This one below is a good example of how much of the line you can get in a single shot. What I love about this first shot is that, if you take away that cellular tower on the left and the houses just behind the right-of-way, this scene could have been shot just about anywhere.

Of course, one challenge at the Cedarview vantage point is the nearby pedestrian walkway below the tracks, which explains those two concrete blocks, which will affect your shots when the train approaches your spot. Here's a closer look at Via 643 en route to Toronto.

And here is a close-up of F40 6417 and its consist of four LRC cars kicking up some fresh snow on the western edge of the Barrhaven neighbourhood. The one drawback of my spot was that the trees were so close to the security fence that I was unable to turn around and get some going away shots of the consists. This was a tough break since the train hadn't yet geared up to speed as it approached the Strandherd Drive crossing, just beyond this spot. 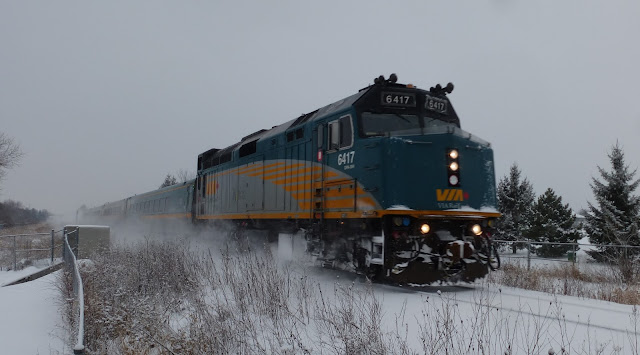 So, instead of those shots, I figured it would be fun to get some close-up shots of the coaches kicking up a little snow. That's one of the fun parts of shooting in the winter. The movement of snow really allows you to capture the power and speed of these machines in ways you can't in the summer. 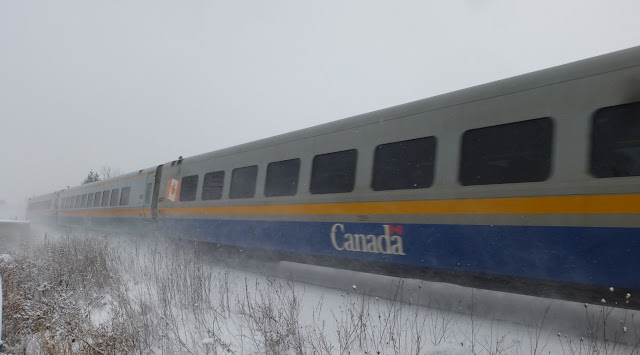 While I'm talking about winter in Ottawa, I should mention that I've been out to Twin Elm a few times lately, although never at a time when a train was passing. I took this shot of the right-of-way facing east from Twin Elm Road. You can see the yellow aspect on the signal ahead. 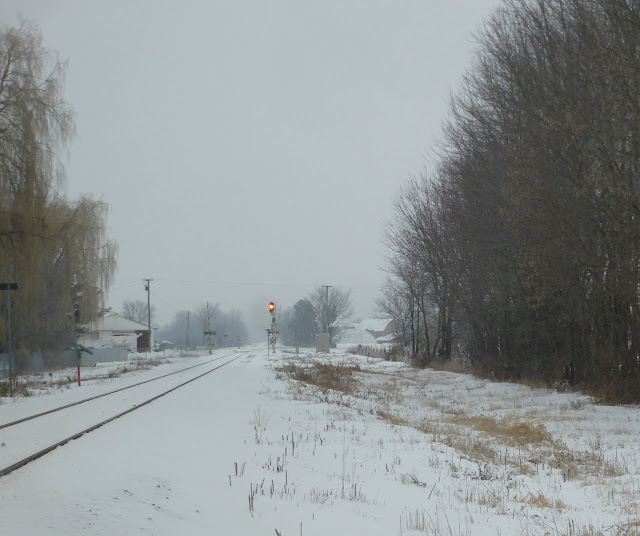 Up until a few weeks ago, there were a few Potash three-bay hoppers still at the SynAgri mill just down the road from the Twin Elm crossing. I haven't seen any new hoppers spotted at the mill in recent weeks, but you can see huge piles of tarped-off potash (presumably) right off the SynAgri spur. This hopper, below, is heavily tagged by graffiti taggers. 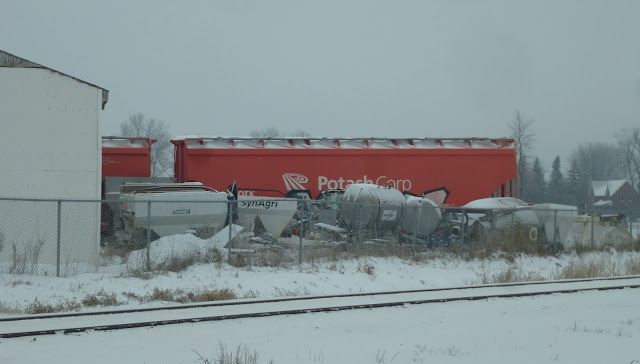 So those were my little winter adventures in the last few weeks. Since Ottawa appears to be in the midst of winter for real now, I am hopeful that I can add a few more winter gems to my photo collection.
Posted by Michael at Thursday, January 14, 2016
Email ThisBlogThis!Share to TwitterShare to FacebookShare to Pinterest
Labels: Barrhaven, F40PH-2, LRC, Ottawa, passenger trains, Potash, railfanning, railways, Smiths Falls Subdivision, Twin Elm Ontario, Via Rail

Love the header photo, Michael. Such locations are where you find them, and there's nothing better than finding a new one. Thanks for the potash car update, too!
Eric

Thanks all. Eric -- I had trouble deciding which photo to use for the header and which to include in the post. I'm not one to use a photo in a post and then double it on the header. Ah, it's a good problem to have.

Nice catch. That first shot is a real beauty!

Thanks AJ. I highly recommend this spot to local railfans.