I'd like to take this opportunity to welcome another guest blogger, Don Douglas, to the Beachburg Sub. Please take a moment to leave a comment to let know Don what you think - Michael

It seems the CN run up to the Nylene Canada plant is the hidden gem for railfans in Ottawa. Recently I was able to get great close shots of this train.


In a comment a while back on this blog, I had mentioned that my doctor is in Carp. At one time, I witnessed the Ottawa Central coming through Carp on its return from Arnprior. The rail there is light and in somewhat disrepair, so the speed limit is 10mph. It was before digital cameras really became a norm (and before smartphones), so I have no photographic evidence. Since then, every time I go to my doctor, I bring a camera.


A couple of weeks ago, I was again at my doctor (just a normal blood pressure check, no big deal). I had finished, and was heading out to work. While waiting for the lights to change at March and Carp roads, I looked left and saw the local. I quickly (and safely) did a quick turn and rushed back into town to catch the train.


Having been through this before, I knew where to go, and went to Salisbury Street. The line runs right next to the road. I hurried over and, being a 10mph limit, had to wait quite a while for it to get there. But that was fine; I had time to get exposure and composition set. 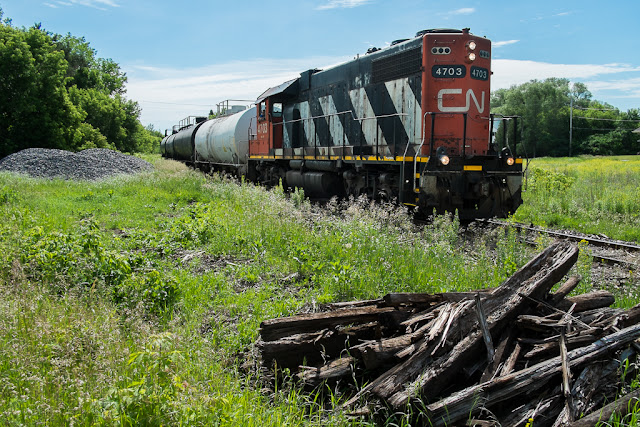 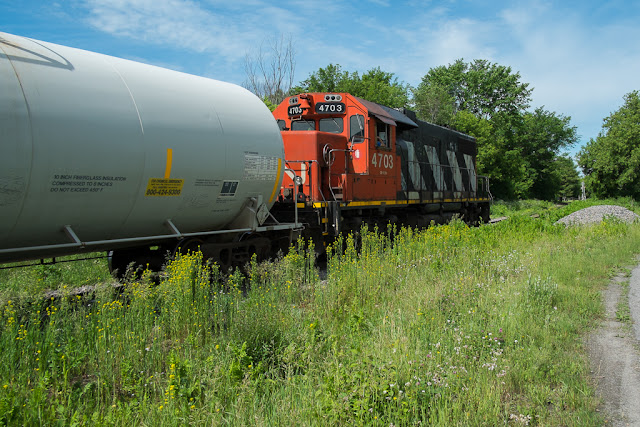 After it went by (four tank cars), I realized I had enough time to head to the next level crossing (thanks to bad track and slow speeds) on Donald B Munro Dr. I jumped in the car (which I left running) and went over. I had, again, plenty of time to get to the location, get a good spot and check exposure before it went by. 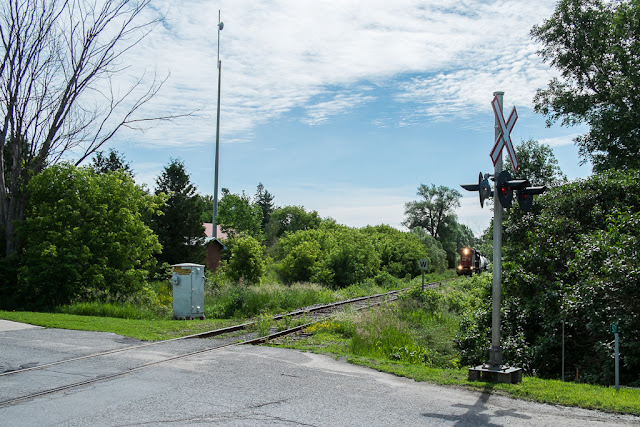 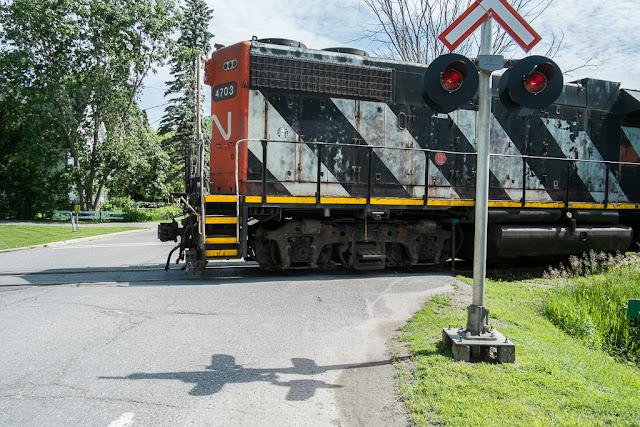 The safety scheme needs some sprucing up 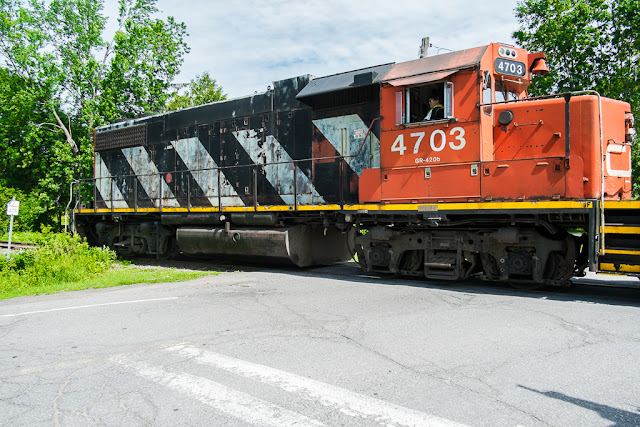 Final shot of CN 589 crossing Donald B. Munro level crossing
After watching it go by, I briefly considered chasing it up the valley a bit more. There was a potential spot I could get a shot of it from farther away in the landscape. But I didn’t have a lens to accommodate that, and I remembered that I did need to get to work. So I let it go, got in my car and went off, knowing I had finally captured that elusive local.

For any camera geeks, the photos were shot with a Fuji X-Pro1 and Fujinon 18mm f2 lens.
Thanks to Don for sharing his story and photos. Please take time to leave a message for Don. I should also mention that another Beachburg Sub reader has suggested that readers begin tracking the times when they catch CN 589 on a Google spreadsheet. If you would like to contribute to his efforts in tracking this local, please click here for the spreadsheet. Thanks to Michael for doing this. - Michael H.

You got a couple of nice shots on it. If you've got the pictures up on flickr, you should add them to the public flickr 589 group. I'm trying to create a location with all of the pics that I've come across of it.

Michael, interesting idea on the google sheet. I had already created one, so I've merged my data into that spreadsheet. Hope you don't mind that I've updated the formatting of it. :)

Great post Don, those are some nice photos! That's great Dave thanks for doing that, the more info the better!

I was blown away by the way the colours popped when Don first sent me the photos. I'm glad he did. Great story and great shots.

Thanks, Michael and Don for this guest blogger post. You guys are getting serious about this little train. Great tracking!

On another note, Ray Farand's Steel Passageways (a Google search with blurb.ca will get you there) is about to be released! CN through Algonquin Park anyone? Ottawa to North Bay through the decades!

I am going to buy that one for sure. I can't wait to see it. Thanks for the tip, Eric!

Thanks for the comments everyone. I'm happy to share the photos of an elusive train. When I have a chance, I will certainly add the photos to the Flickr group.