When life hands you winter

True north strong and free, so our national anthem proclaims. Yes, winter is serious business here in Canada, particularly in northern cities like Ottawa. I have lived here on and off from the better part of 20 years. Even so, this last month has been challenging. Ottawa has regularly averaged highs of -15C (5 Fahrenheit) with wind chills often near -30C or even -40C. One of the most challenging aspects of this weather is how it affects my attempts to photograph trains.

In these past few weeks, weather played havoc with various attempts to get some winter photos. But, these misadventures offered some good lessons, which I think are key to surviving rainfanning in winter, especially in Canada.

Lesson 1 - Be sure that you stake out where you are shooting early. I took this for granted the other weekend when I intended to catch a Via corridor train and a weekly CN freight train. I scouted out a location late, which was made even harder by the fact that blowing snow had obscured the shoulders of the road where I was shooting. The conditions meant I couldn't pull over on Moodie Drive, which was my first choice, since I wanted to shoot a train on the Jock River bridge. I did find a stretch of the shoulder on McKenna Casey Drive that I thought would be safe from passing traffic. I did snag a shot of Via Train 643, en route to Toronto. My camera's burst mode froze up a bit for a second, which meant I missed out on shots when the train was closer to the McKenna Casey crossing. This all could have been avoided had I given myself more time.

Lesson 2 - Expect weather delays. The following weekend, I ventured out earlier to find a spot to catch Via 643 and the CN freight (The freight didn't show either weekend, since it is making its rounds earlier these days). However, I didn't account for the morning snowstorm and blowing snow. Yes, I was much earlier this morning, but I was unfortunately stuck behind a driver that was crawling along Moodie Drive, which ruined my timing.

That meant the warning lights began to flash well before I was close enough to the McKenna Casey crossing. I had to pull over onto the side of the road and shoot the train beneath the Highway 416 overpass. I had been meaning to get some shots in this area, since it offers some interesting sightlines and graffiti. Unfortunately, since I had to rush, I didn't get the greatest angle, which hampered the shots a fair bit.

However, I was reasonably happy with these shots, considering they were a first effort in this location. I think when the weather is better, I will be able to walk closer to the tracks and get some better shots. Still, I love the look of a train kicking up a lot of snow.

Lesson 3 - Take an extra set of gloves. I cannot stress this enough. Usually, when the temperature is -19C with a wind chill factor near -40C, I am better prepared. This past Saturday night, I picked up a friend at the Fallowfield Via station at 11:10 p.m. I usually have a big pair of woolen winter mittens that I use when out in the elements. On really cold days, I put on a thin set of gloves beneath the big mittens. You can get these things anywhere for a dollar or two. The benefit of using these is that, when a train is coming, you can take off your bulky winter gloves or mittens and get a better feel for your camera. The thin gloves will protect your hands and buy you some time before frostbite begins to set in.
I failed to do this on Saturday as I watched Via's Train 48 pull into the suburban station. Although I was thrilled with my first successful attempt at night photography, my hands were impossibly frostbitten in about a minute, which made the drive home extremely uncomfortable. 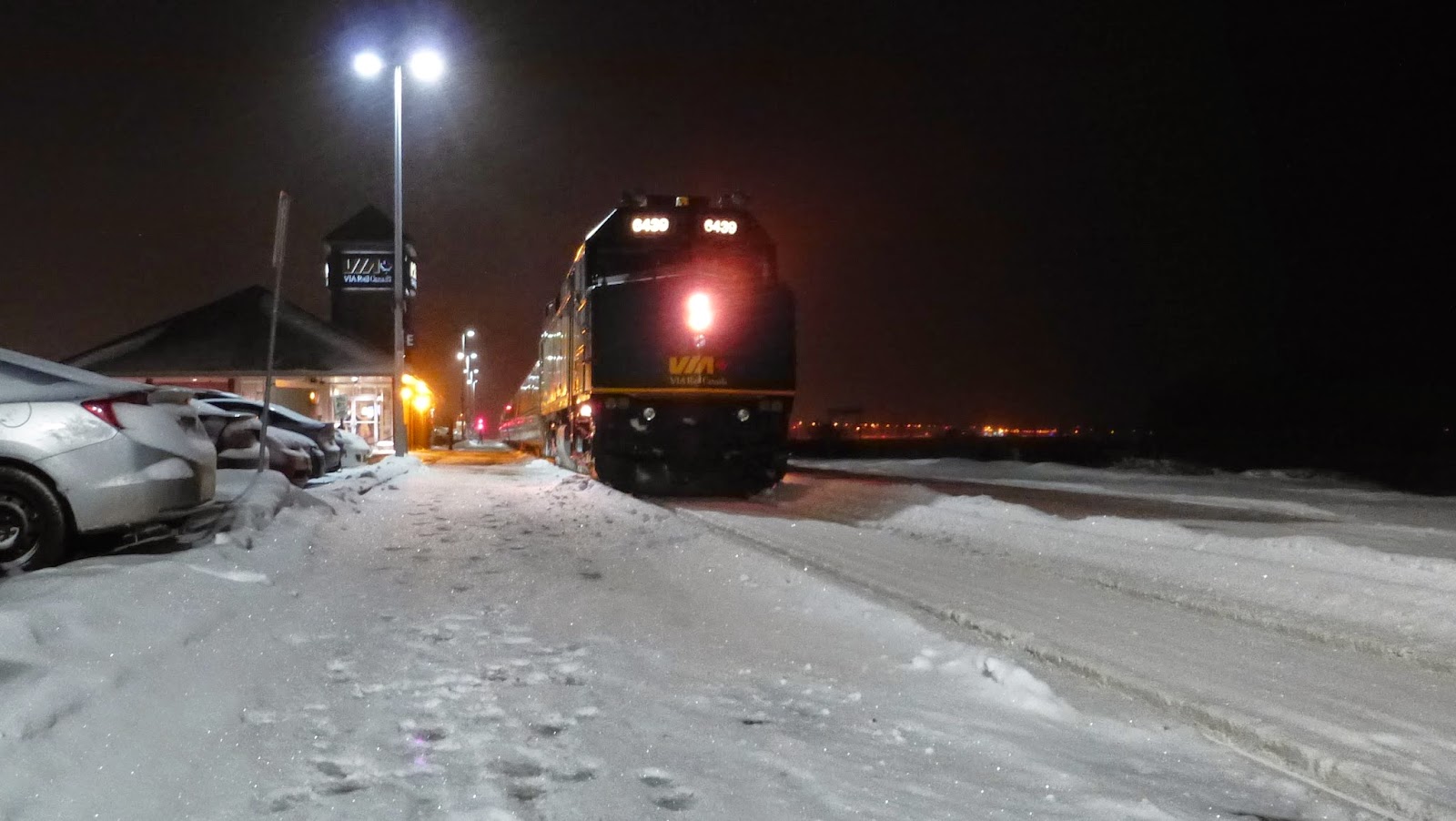 I could include a lesson here about checking your camera's night settings, but I will leave that for more experienced photographers. Needless to say, I studied my camera's settings and was sure to set it correctly before I arrived at the station so I could get some good shots at night. I also made sure to fire off a few test shots. This could also be lesson 4, but it's a more universal lesson, which isn't particular to winter photography. 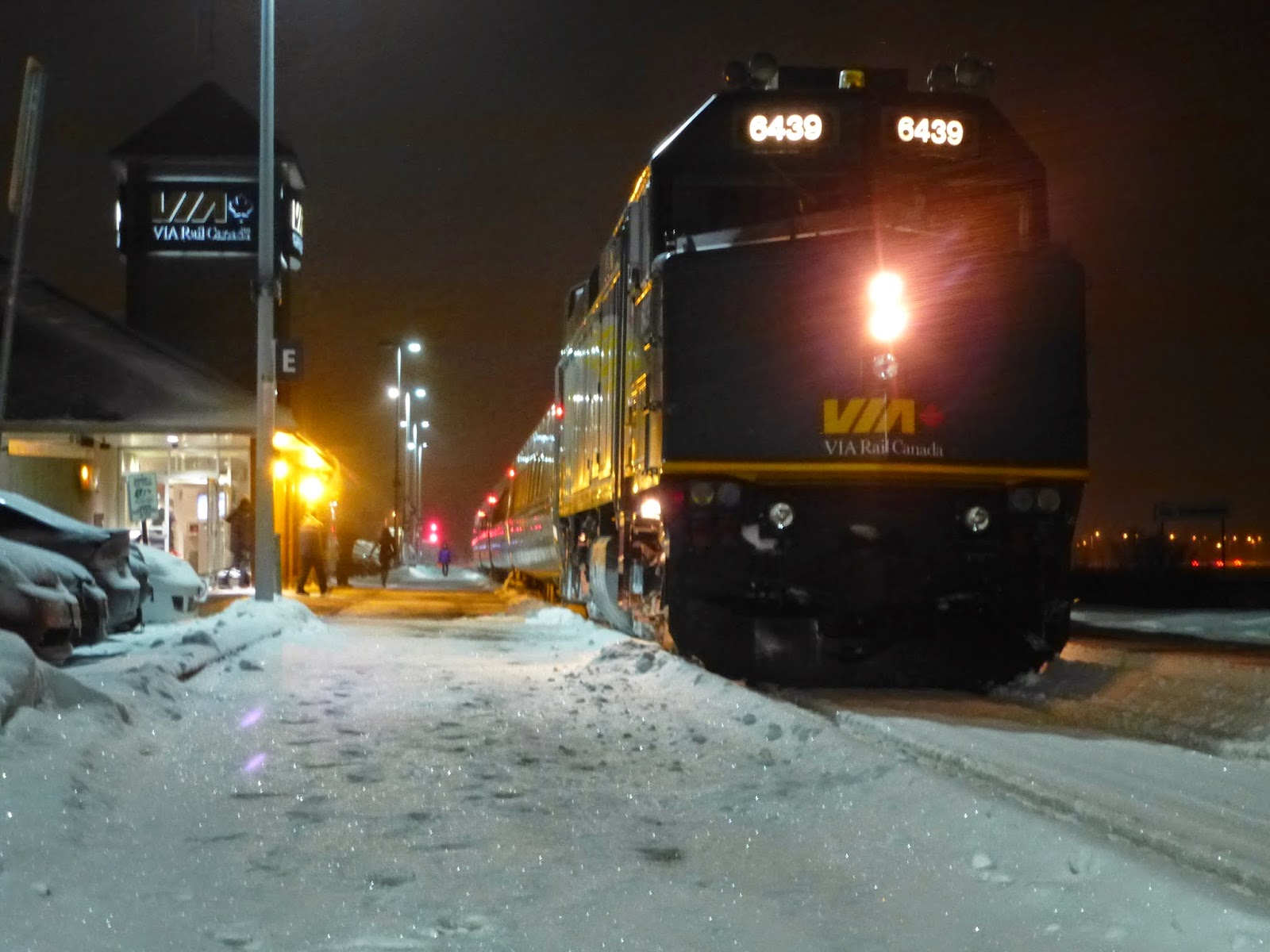 I was really pleased with this above shot in particular. The snow on the tracks and platform served to brighten the ambient light and reflect the overhead floodlights, which helped illuminate the shot. I have tried nighttime photography at this site in the summer and it's ten times more challenging, as you can see from the shot in this post. I also like that my shots managed to capture the windy conditions in 6439's headlights.
So, to sum up, scout your location ahead of time, expect delays and always overdress. Winter rail photography is challenging, but worth it!
Posted by Michael at Thursday, February 19, 2015

Nice shots and the stories behind the shots, Michael. If we wanted to have trouble-free railway photography, we'd live in Arizona! But then there'd be poisonous snakes, flash floods, and a host of other problems particular to that climate. Come to think of it, I'll stick to Canada!

Well, I did see a moose the other day... I guess I'll take my chances with our winters and wildlife. If we didn't have these winters, how would we ever appreciate our summers? Thanks for your comments, Eric.

Great tips and I especially appreciate #1. It is definitely harder to pull to the side to take a photo in winter. I know some of my favourite parking spots are unavailable in winter.

I'm not so concerned about slow drivers as I do not drive fast in winter. I'd rather miss the train and stay on the road!

I think you can use the lines under that overpass for some great photos!

Speaking of great photos, good job on the night VIA photos. Nicely done.

I figured a Winnipegger, originally from NB, would appreciate some winter discussion! Thanks for your comments, Steve.

That's some great admirable dedication and some good advice too! I'm sure you've heard the city is starting construction on an underpass at the Greenbank via crossing, so I'll be sure to face the cold and take some pictures of the crossing before major construction starts.