Guest post: Ride the Algoma Central Railway while you can (Part II)

This is the second part of a series about Beachburg Sub contributor Dave M.'s adventures aboard the Algoma Central's passenger trains in Northern Ontario. Please click here to read the first part.

In the morning, we tried to go standby on the tourist excursion train so that we could have some time to hike around the Agawa Canyon before continuing on the local passenger service. Unfortunately, staff said that all 15-20 cars were full, so we were unable to get on. We then proceeded to the yard to catch the regular passenger train back. The train had around 30 people aboard when departing Sault Ste. Marie. Before we got moving, people from a group trying to save the service handed out petition postcards and explained the importance of the line to each passenger. I noticed that some statistics that said the line is responsible for $35 to $48 million in direct and indirect economic activity and that $2.2 million would be required to keep the passenger service alive a year. Everyone boarding the train gladly filled out the surveys. 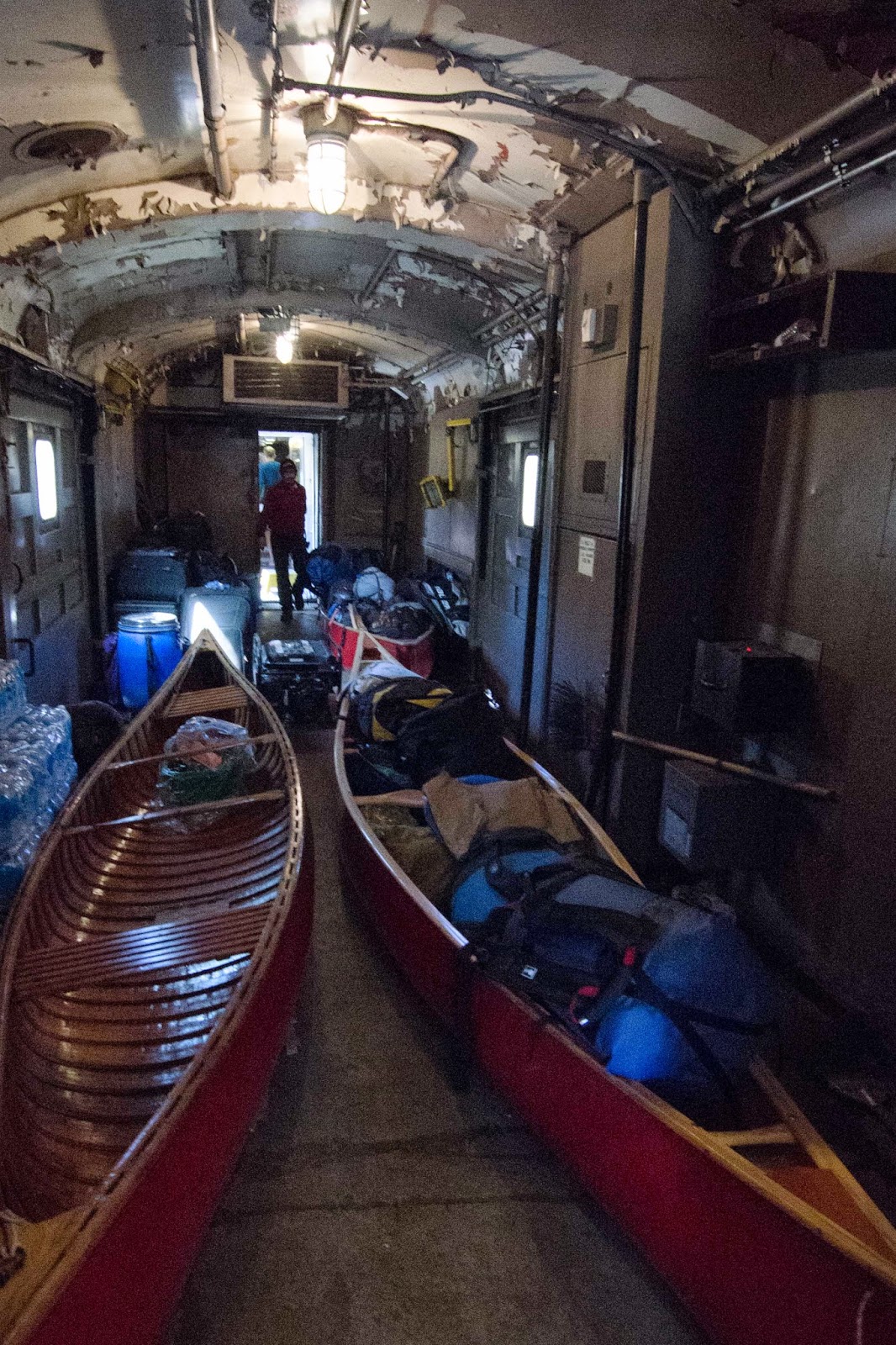 An hour or two into the trip, the train stopped at a lodge along the line and picked up a film crew of 15 people, along with several canoes, camera equipment, generators and other items. Many hands helped load and fill up the baggage car. It took around 5 to 10 minutes to load everything. They stayed on the train for about half an hour or so until they reached the canyon. The crew was filming Spirit Land: In Search of the Group of Seven. They were very excited about the footage they shot, shooting at some of the exact locations where the artists made their paintings. When they arrived at the canyon, they unloaded all of their stuff and started moving into a modified box car/sleeping car on a siding. The scenery between the Montreal River and Agawa was very good, especially with the fall colours. When we departed the train at Mile 183, there were only six people remaining on the train, which was going through to Hearst. 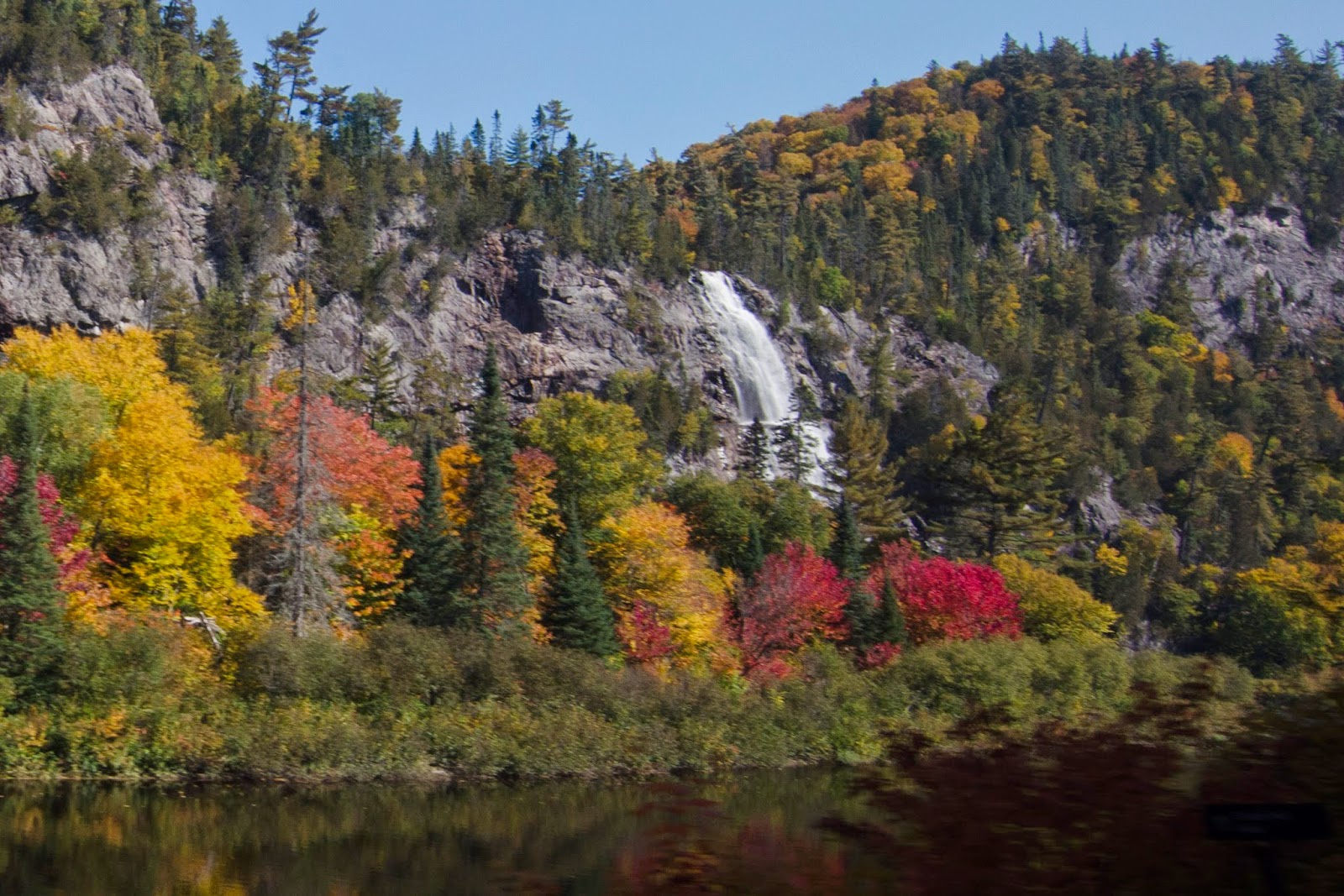 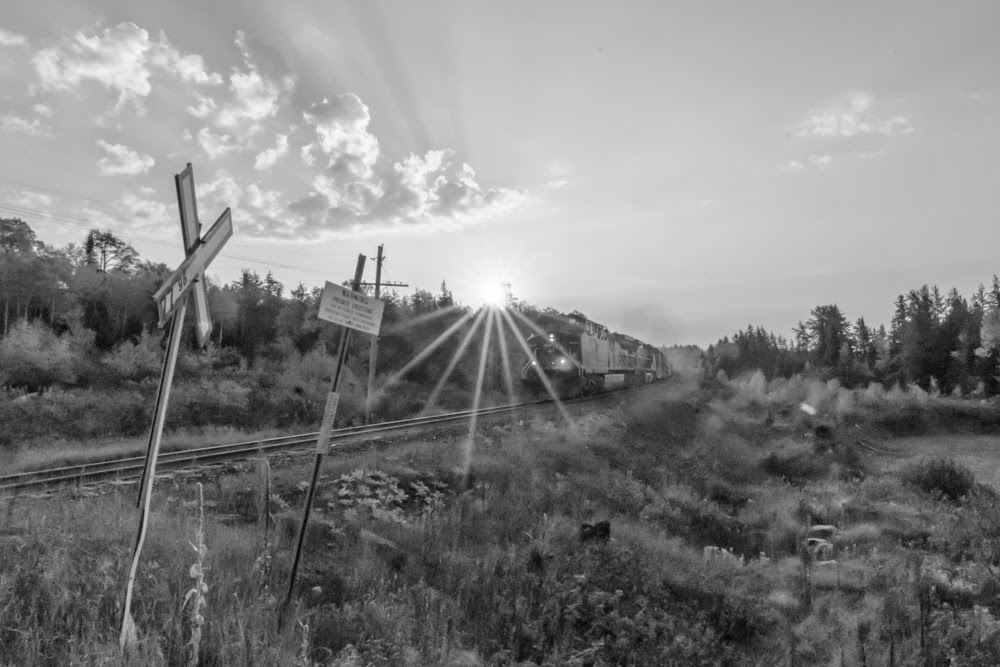 After spending the night in Dubreuilville, we got up early to catch the train at Mile 77.9 on the White River Sub. I knew that there was a hotbox detector at Mile 84.9 (on the far side of Franz), so I tuned the scanner to get a heads-up on when the train would arrive. I didn't catch the detector but I did hear Via 186 and CTC discussing an oncoming freight. Sure enough, in about five minutes, we saw the freight (above). And five minutes after that, we flagged down Via 186. When we boarded the train, there was only one other person aboard. It was a very smooth ride on CPR's continuous welded track, a big improvement over the jointed rail of the ACR. 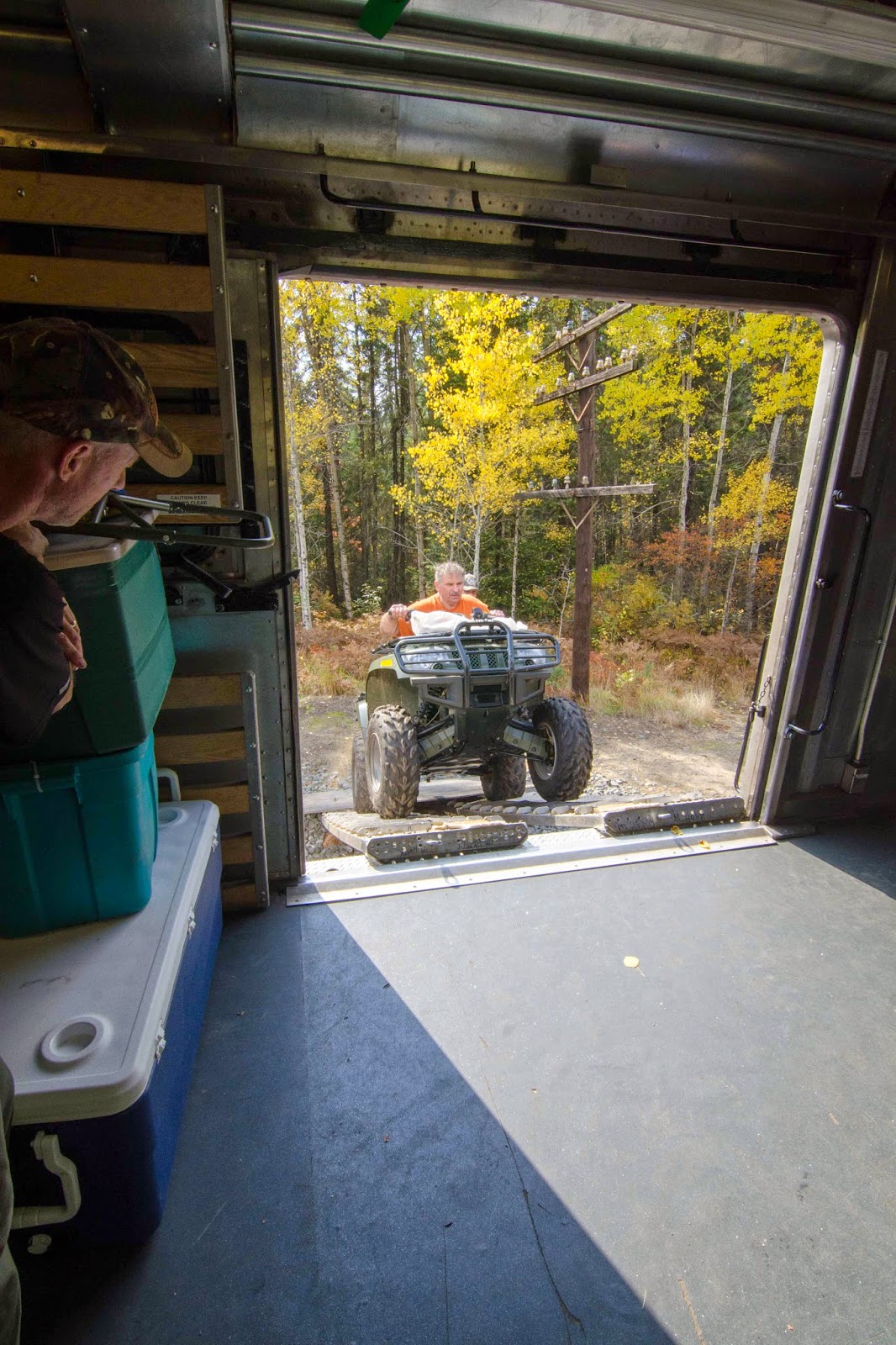 Typical site aboard Via Rail's Northern Ontario service. Harder than it looks!
The journey back was much busier. We picked up several fishermen and hunters with their canoes. There was an exciting stop where we picked up an ATV. The owner of the ATV made metal tracks so that he could drive the machine onto the train. Driving the ATV on was a bit more difficult than I thought it would have been. The man has to give it quite a bit of juice to get up the steep incline. He also had to be sure to duck so he didn't hit his head on the top of the baggage car doorframe. He then had to hit the brakes hard once he made it in. When we got to Cartier, he pulled his pickup truck beside the train and they lifted/pushed the ATV onto the truck. On our journey to Cartier, we picked up quite a few more passengers. But after Cartier, there were less than 10 of us left.
Just outside of Cartier on the Nemegos Sub at Forks, we pulled into a siding and then a mainline freight stopped, occupying the switch we were to pass over. The detector at Mile 23.2 had flagged a heat alarm on the freight train. The Via staff then went out to inspect the CP train to help find the problem. The freight was more than 50 cars long. They found the problem five cars from where we stopped. The Via engineers addressed the problem (which I think was a brake issue) allowing the CP freight to continue along, which also cleared our path.
We arrived in Sudbury a few minutes ahead of schedule. I am unsure how long this punctuality will last because CP has recently rescheduled a slow freight train (the reason for the recent schedule in the first place) to depart before Via 186. We were lucky on our trip because CTC allowed us to pass the slow freight train when we were both sent to a siding to allow CP 101 to pass. Let's hope that the goodwill of the CP CTC will continue to allow Via's Lake Superior service to be on time. 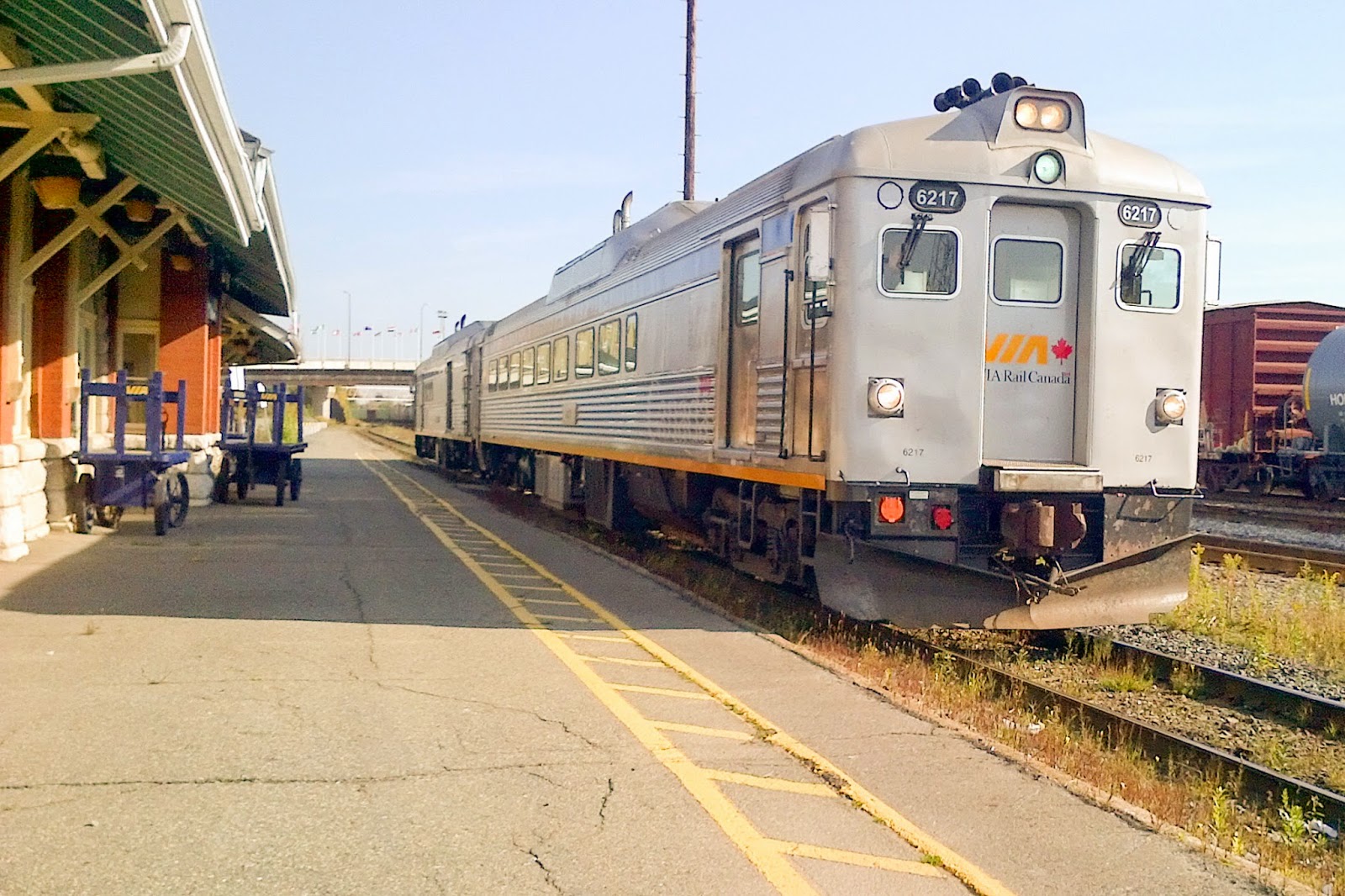 Based on my discussions during my trip, I don't think that Via's Lake Superior service is in danger of being lost, but I'm fearful for the future of the Algoma Central passenger service. There are two ways that we can help the ACR. The first is to write a letter to the federal Minister of Transportation in support of this service. The second, and most fun way, to show your support is by using the service.
Special thanks to Dave M. for this extensive look at passenger services in Northern Ontario. Please feel free to leave a comment and let Dave know what you think - Michael
﻿

Thanks to both of you, Dave and Michael, for sharing this trip report. Great to read and photos to enjoy!
Eric

I was merely the happy recipient. All credit due to Dave for this fascinating post.