Ottawa's Walkley Yard is a strange place these days, with only a bare minimum of activity happening. Since CN's acquisition of the Ottawa Central Railway in 2008, there has been a noticeable drop off in freight traffic in the region. With the O-Train service suspended for the summer, due to the $59-million renewal of the existing 8-kilometre Capital Railway, the commuter trains also sit silent in the mostly empty yard. I dropped by on the civic holiday Monday (Colonel By Day in Ottawa) just to see what was there, and the trip did not disappoint. When I drove to the end of Albion Road, where the CN office sits, I saw this former Devco Railway caboose, sitting near the locomotive shop, badly in need of a paint job. As you can see, security in the yard is minimal at best, which explains the graffiti on the caboose, including its windows. The caboose has been around since the Ottawa Central days. It is still used by CN for the same purpose, mainly shoving moves. 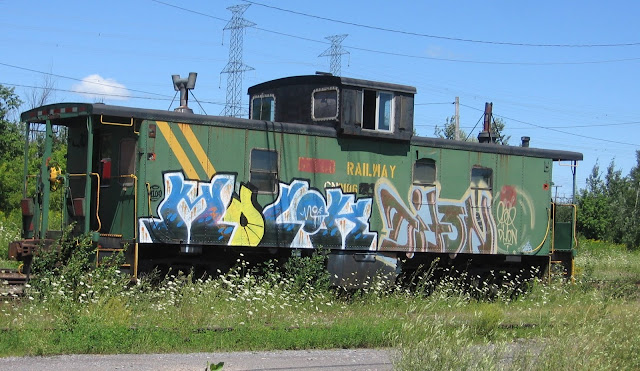 Just east of the caboose, I saw the lone CN locomotive currently assigned to Ottawa, GP38-2W 4807, still clad in the CN safety scheme, albeit just barely. Getting photos from a service road was tough since the weeds in the yard have not been trimmed this summer, which tended to obscure the locomotive's trucks. Seeing the old geep in the safety scheme was cool. I have always liked that scheme. 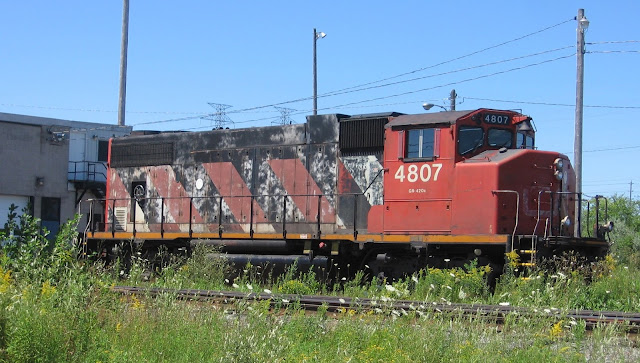 The Walkley Yard was constructed in 1955 by the National Capital Commission to replace the Canadian National's rail operations in central Ottawa. This was part of a plan to rid the centre of the city of its rail lines as part of a Paris-inspired urban redevelopment plan. The yard eventually housed Canadian Pacific's freight operations, which were moved in the 1960s from its old Ottawa West Yard, near the Prince of Wales rail bridge on the Ottawa River. In the past decade and a half, CP sold off its local trackage to the City of Ottawa while the Ottawa Central was sold to CN as part of a larger package of short lines. When you factor in the loss of heavy industry in Eastern Ontario, the end result is a mostly empty rail yard, which describes Walkley these days. These cars below were the sum total of rolling stock in the main yard on the holiday. 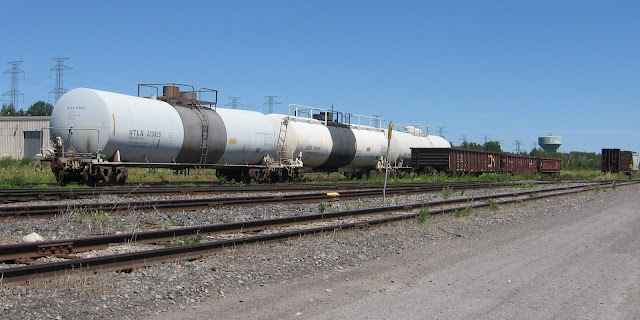 But as I drove down the service road, I saw something on the margins of the empty east end of the yard. I drove toward the odd site, but not before I took a few snaps of interesting rolling stock on a spur, which included a transload facility called Rideau Bulk. You can see a Wisconsin Central boxcar to the right of the TTX (Railbox to me) waffle-side boxcar. 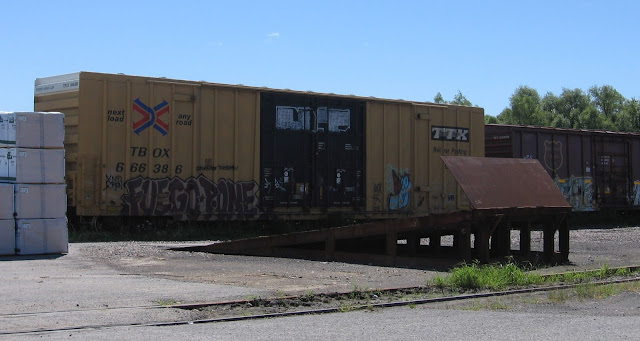 A little further east of that spur, I saw these interesting relics at the edge of the yard. Sitting on a dead-end wreck track was former CN caboose 79872 and former Budd RDC numbered 6002. Doing a little research, I learned that both have been left at Walkley since 2007. The cars are lettered DAWX, which means they are owned by David A. Wamsley & Co., a private company that owns and sells rail equipment. I was only able to find a few scant mentions of the company online and a few photos, so I invite readers to share what they can find about this company and these cars. At one point, there was another RDC on the same track, but that unit has since been refurbished by Via. From what I can gather, this remaining RDC is a former piece of Via equipment (numbered 6002) and is a RDC9. Notice that the caboose's door has been left open. 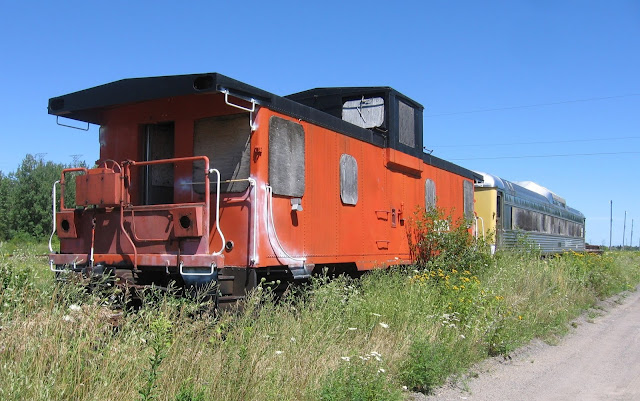 Another view of the RDC, below. 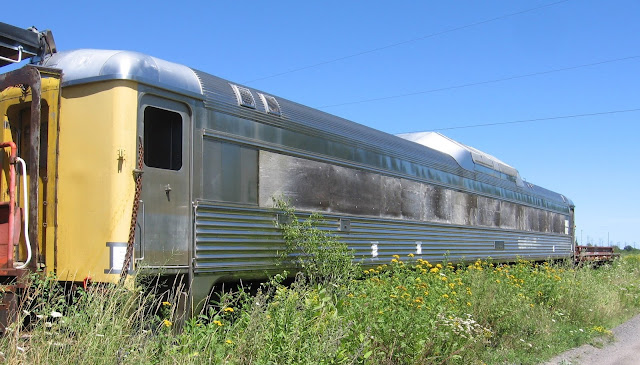 And a view of the end. 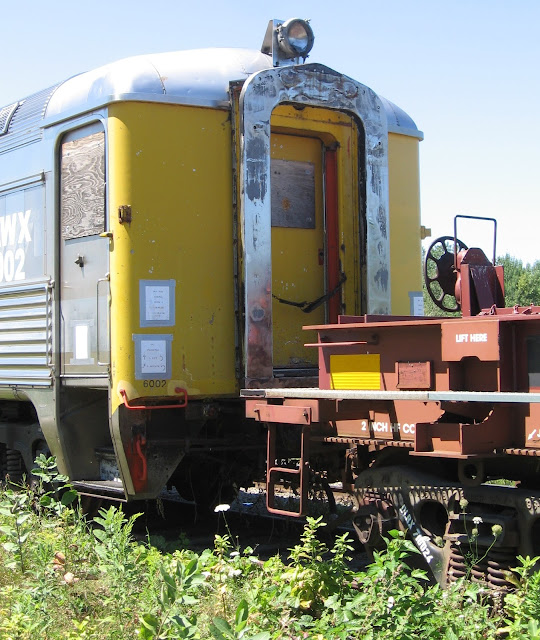 Here's another shot of the caboose and its markings. There are photos of other CN cabooses out there, but I was unable to find a shot of this one in its prime. 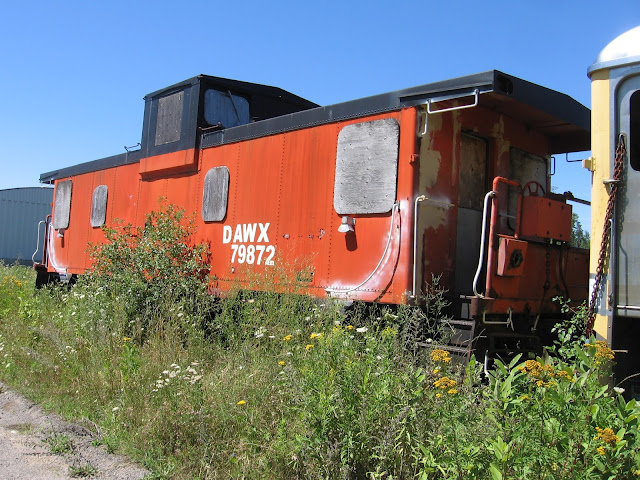 As I left the yard, I saw one lonely ballast car (filled). It looks as if the car has been modified. Behind it, one of the city's water towers. 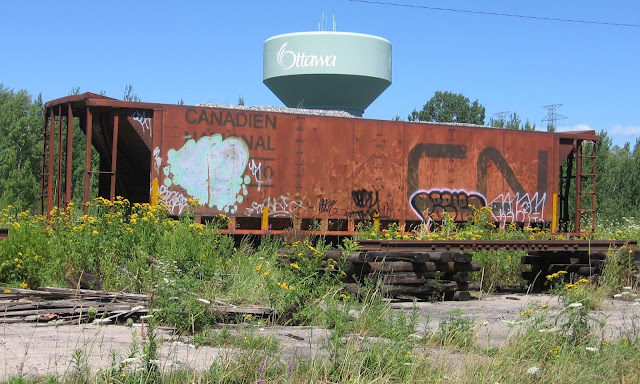 And one last shot of CN 4807 before I headed back home. 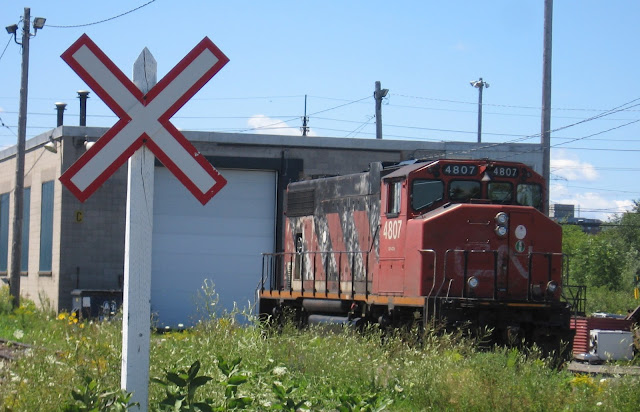 This visit proved to be the highlight of my holiday Monday. Now that I know how to get around the yard a little better, I am going to make a habit of checking it out every once in a while, even if there is only a handful of things to shoot. In Ottawa, you have to take what you can get!

Excellent post, Michael! As you did, I like to scour around yards for unique rolling stock, or as you mentioned in Ottawa, take what you can find!

The ballast car is a former 'slab-side' covered hopper that's had its roof removed.

Interesting car coupled to the RDC, perhaps a coil car?

I included 6002 in the Disposition section of my Trackside with VIA: Cross-Canada Compendium book...it moved east with five other RDC9's and 6401 on CN train No 318 on Aug 15, 1987, seen at CN's Belleville yard by my dad. The Railiners were stored at Les Cedres/Cedars QC, sold to Walmsley in 1998.

Here's the sum total of my Walkley Yard railfanning, during a taxi ride no less (tenth photo in this post):

I have more photos from my day at Walkley to share, but I didn't get a good shot of the third car that was hitched to the caboose and RDC9. You've given me a good excuse to head back there soon and get a shot of that car.

No worries, Michael. If I was any kind of rolling stock enthusiast, I would be able to identify that car based on your photo :)

However...if you need an excuse to head back there...that's OK, too!

I struggle with the idea of how many photos/how much text to include. Is it one too few or one too many? There's always the idea of serializing into multiple parts...ah, the trials of a blogger!