Although Ottawa's rail network has been pushed to the peripheries of the city, the capital is by no means a rail backwater, at least not when it comes to Via Rail. As many a traveler would know, Ottawa remains a key part of Via Rail Canada's network, with regular passenger service to and from Toronto and Montreal each day. 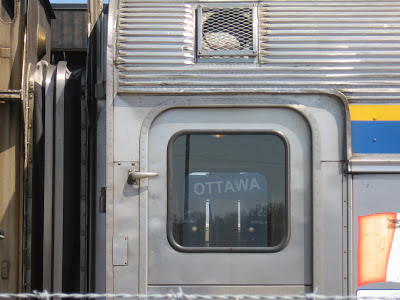 In some respects, the Ottawa market is a key destination for Via, since it owns its own trackage in Eastern Ontario and in Ottawa. This means it does not have to contend with the scheduling demands of CN or CP, which is a reality for Via elsewhere. This sometimes means freights are given priority, causing delays for passenger trains.

Having its own trackage means Via's on-time performance in this key portion of the Windsor-Quebec City corridor is quite good.

Since 1966, passengers arriving in Ottawa finish their journey at the Ottawa Central Railway Station, as it is called by Via. The station is located on Tremblay Road in an area east of the downtown. It's relatively close to some apartment buildings and a nearby neighbourhood with streets named after the alphabet, but it is otherwise an isolated island next to multiple retail developments, a baseball stadium and Highway 417.

Via took the rare step of opening a second railway station in southern Ottawa in 2002 in the Barrhaven subdivision. The Fallowfield station, as it is called, is typical of small-town stations and seems to be popular, based on the times I pick up family there and ride the train myself. 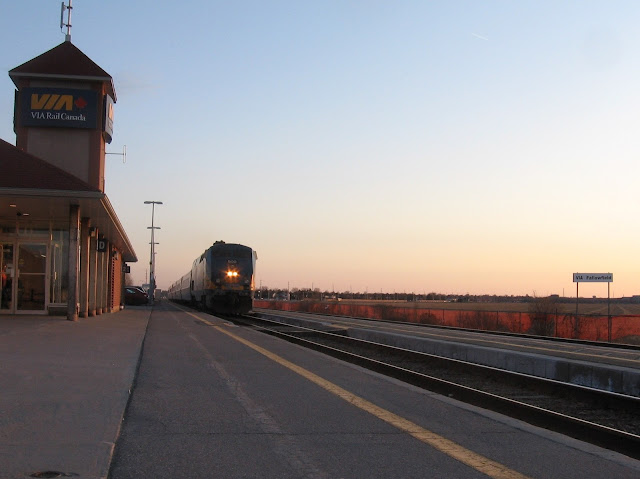 Of course, there was a time when passengers actually finished their journey in downtown Ottawa. Before rails were ripped up from central Ottawa, as per the suggestions in the Greber urban planning report, passenger trains made their way to the old Union Station, just east of Parliament Hill. Visitors to the capital will know the old train station when they see it. The old building has been the Government Conference Centre for years. Sadly, it has been renovated inside to the point where some of the architectural features of the old station are unrecognizable. The building is also off limits to the public. I have been lucky enough to see the place as a journalist covering past federal budgets, since journalists go there for the lock-up prior to the budget being released publicly. There are a number of historic railway photographs in the building and some original features of the old station are still visible. There is also a hallway beneath Rideau Street that connects the station to the hotel across the street.

The tracks leading up to the old Union Station used to follow the east side of the Rideau Canal along a portion of what is now Colonel By Drive. It seems almost unthinkable today to see this meandering, tree-lined parkway as a rail line, but here is photographic proof, courtesy of the Canadian Science and Technology Museum. 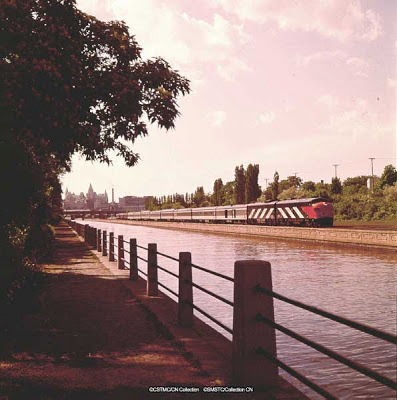 This photo was taken in 1963. This stretch of the canal now features parkland, bike trails and beautiful homes that I could never afford. Seeing an old CN Rapido led by an F9A and B unit is an odd site indeed.

At one point right before 1967, the old train station was going to be torn down, but it was saved by those who recognized its beauty and historic significance.

The station was originally opened by the Grand Trunk in 1912 to serve as a central station for the CN, CP and Grand Trunk, although only the GTR used the station originally.

The station opened the same day as the famous railway hotel across the street, the Chateau Laurier. Neither building opened with much fanfare since the man who was behind the construction of both, Grand Trunk President Charles Melville Hays, died on the Titantic on April 15. It's a commonly held belief in Ottawa that the president's ghost roams the halls of the Chateau. Many guests claim to have seen Mr. Hays and insist he is a friendly spirit.

Not sure what the ghost of Mr. Hays thinks about state of Ottawa's rail network today.

At a time when railways are being seen as an increasingly important resource to traffic-congested cities, Ottawa is a city without a downtown rail connection. It's hard to imagine where rails would fit into the core now, although an underground tunnel for the city's light rail system will be in place in the coming years. Looking at the photo below, an altogether different picture of Ottawa is seen, one where rails dominated. The photo is from Library and Archives Canada. 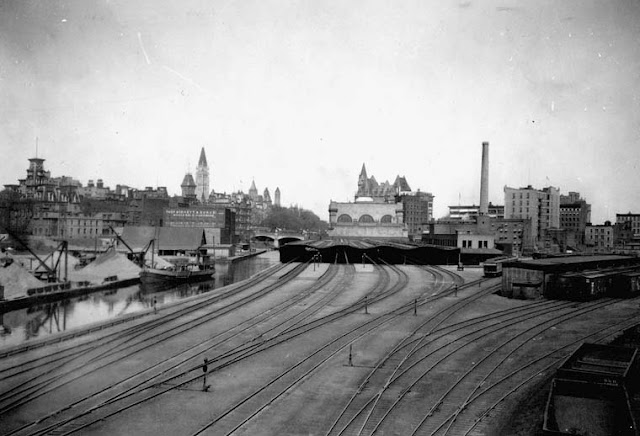 As you can see in the middle of the image behind the train sheds, Union Station was a transportation hub in Ottawa, next to the Rideau Canal. To the right, is the old train yard, which is now part of the University of Ottawa campus and the poorly named mini-expressway Nicholas Street. To the left is an old gravel or sand dock. Today, this side of the canal is parkland with plenty of trees, a bike bath and Queen Elizabeth Drive. Also,you'll see lots of homes you can't afford. Very little in this photo still exists today other than the Parliament buildings, to the left, and the Chateau Laurier (directly behind the train station).

Imagine emerging right onto the downtown Ottawa streets from this station with the Chateau Laurier right in front of you and the Parliament buildings and National War Memorial just to your left (Canada Science and Technology Museum photo below). 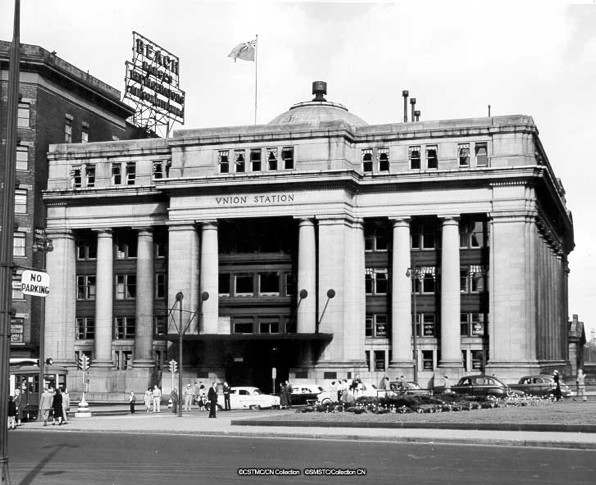 Although Ottawa's central train station today is not in a terribly strategic position for Via, especially compared to the location of its other big-city stations, the structure itself is an excellent station. I am not a fan of modern architecture for the most part, but this station is an exception. 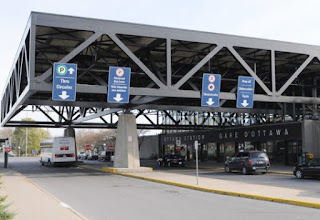 Although not much to look at initially, when you walk into the station, you are struck by the immense windows, bright natural light and spaciousness. It's unique, to be sure (Photo is from the Via Rail website).

I chose not to take any photos of the station myself because it's difficult to get the building in a single shot that does it justice. This photo at least gives you an idea of the front facade and the emphasis on windows. When you walk into the place, there are some impressive steam engine models to look at while you wait.

As I mentioned in my first post in this series (Last stop: Ottawa, Part I), it seems a little short-sited that Ottawa would have no downtown rail connection of any kind, especially considering how beautiful the old Union Station is and how convenient it is for travelers, government officials, politicians and business people.

At least there is easy photo access at the central station. Small consolation. 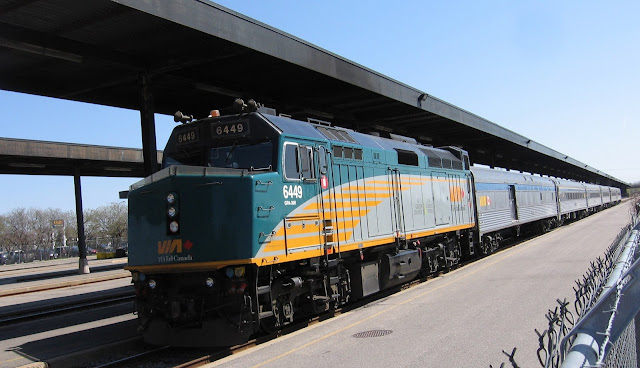