A family trip to the Goderich area this August allowed me to get a better look at the Goderich-Exeter Railway operations in the lakeside town. The railway's operations appear to be fairly quiet in this town these days, due to the loss of local industry in recent years, notably the Volvo Manufacturing facility. However, the railway still services the town's salt mine on the lake and related salt processing facilities. Also, a government initiative to establish Goderich as a deepwater commercial port could bode well for the GEXR, whose rails run from Lake Huron through much of southern Ontario all the way to MacMillan Yard in the Toronto area, via running rights on CN.

The day I explored some of the railway's facilities, including its rail yard at the old CN Centre Street railway station, all was quiet. GEXR GP9 4001 (right) had been parked for the day while a string of eight hoppers looked ready for placement or shipment. You can see the TPI Enterprises facility behind the yard. The plant makes industrial parts and equipment for various industries, including the salt mine. 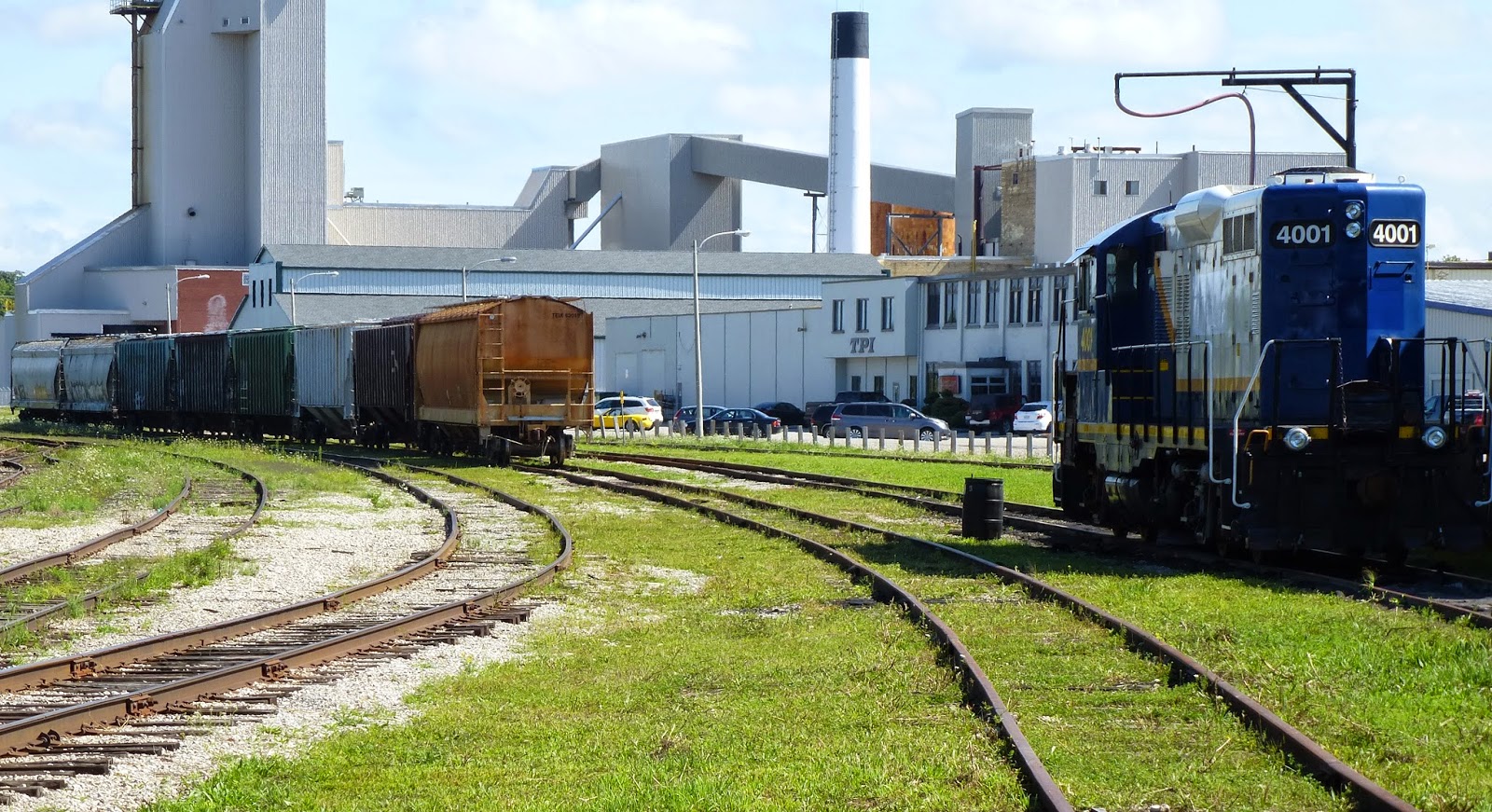 As you can see from this shot, the yard is somewhat overgrown. GEXR is now a Genesee and Wyoming railway, but traces of its Rail America past are still visible, including the former Rail America livery on the GP9.
The shot below shows you the railway's descent down toward the Sifto salt mine on Lake Huron. Despite some of the overgrowth, it appears that the right-of-way was recently topped up with new ballast, judging by the bleached stones beneath the rails. As a point of interest, I crossed the right-of-way at a level crossing with a hiking trail. You can see that the level crossing with the road is marked with crossbucks, but no signals. I suspect this is because this line is not terribly busy and most movements here are slow. 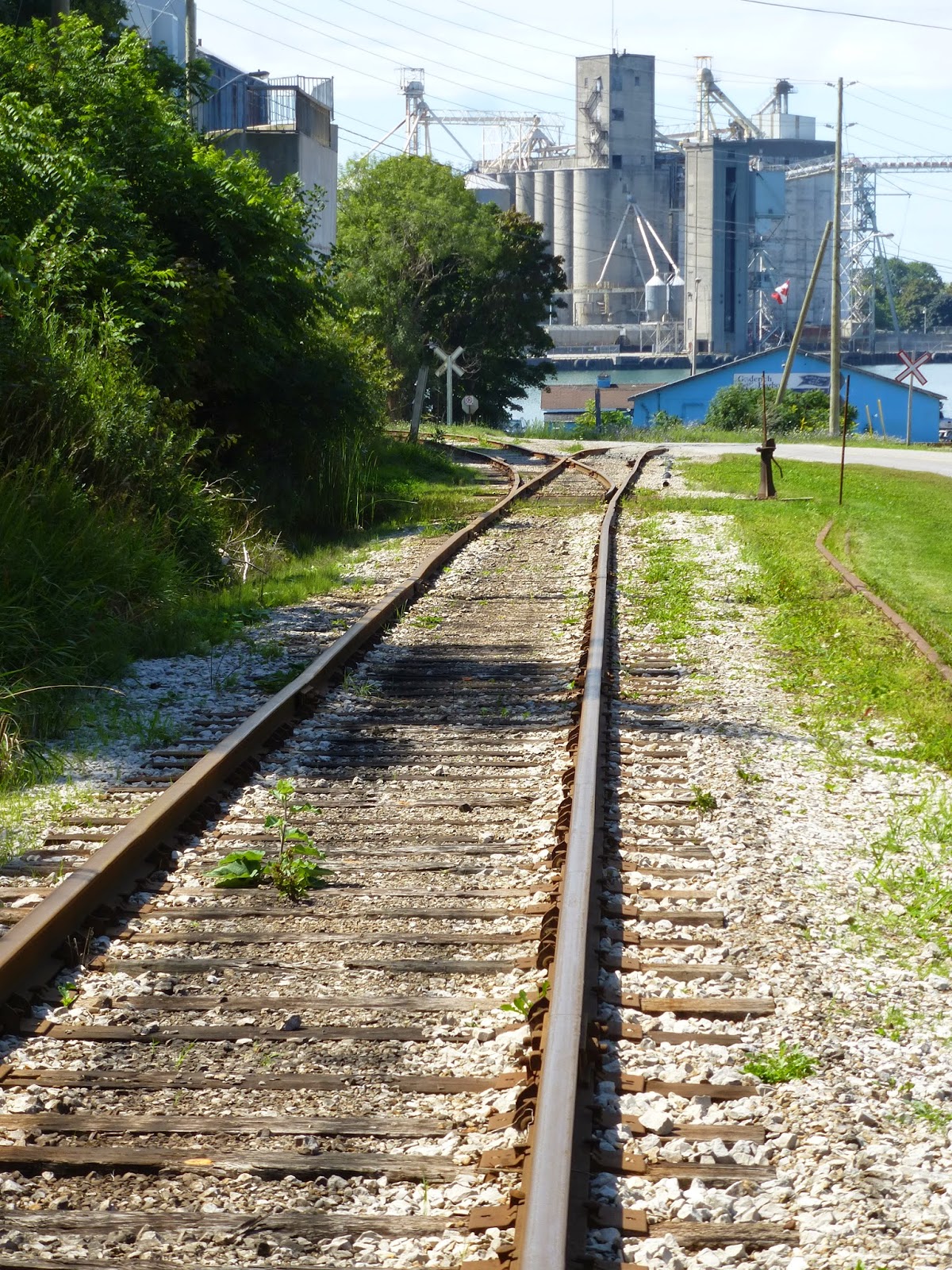 
If you are a fan of the big machines, then Goderich is the place for you. My wife and I like hanging out at the beach in Goderich, right next to the salt mine, whose operations jut out into the lake on a very large pier. From the beach, you can usually see a string of covered hoppers at the ready. I haven't been lucky enough to see any switching operations, but I saw something equally fascinating in August. 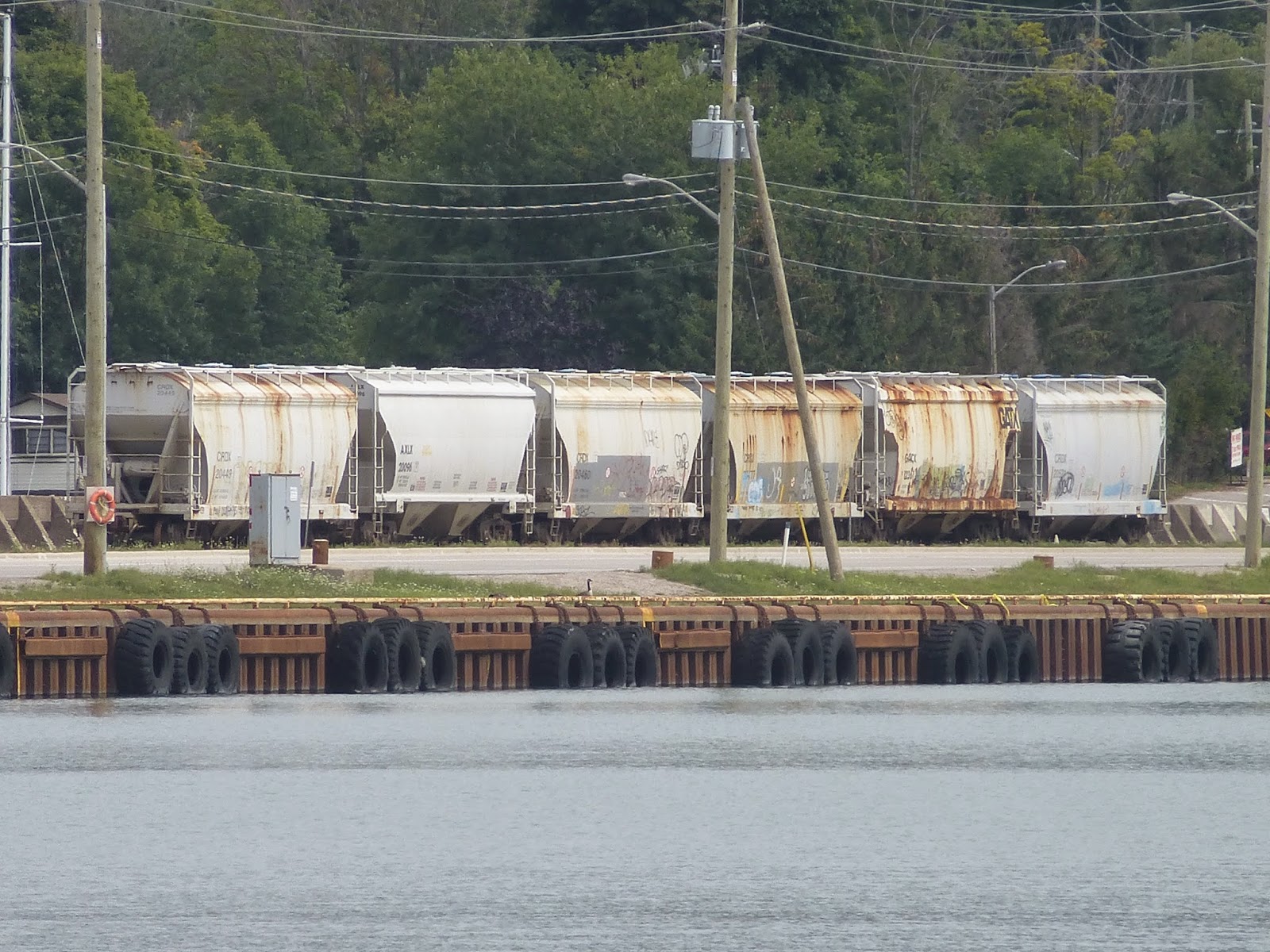 On the day we were at the beach, Great Lakes salt ship Algosteel was being loaded with salt. These hulking ships are amazing to see up close. You really don't realize just how big they are until you see them in person. Algosteel, it should be noted, still bears its Algoma Central Marine colours, which closely match the Algoma Central Railway colours. This harkens back to when the railway (now a CN property) was once linked to the shipping company as part of a larger Algoma Central transportation concern. 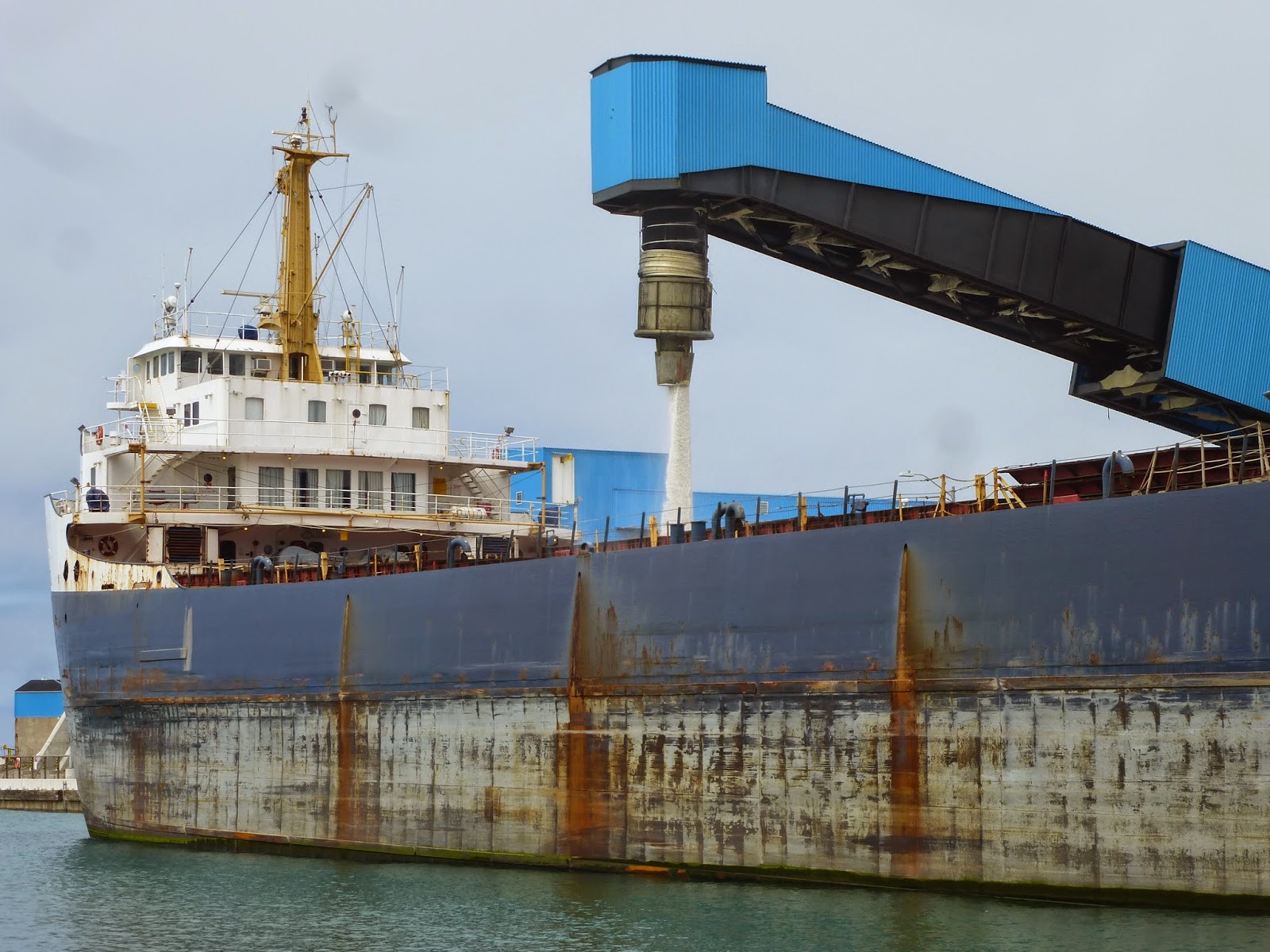 As an added bonus, the large ship was met by a tall ship, that just happened to be coming in to dock at Goderich when we were on the beach. Again, you have to see these vessels up close to appreciate them. 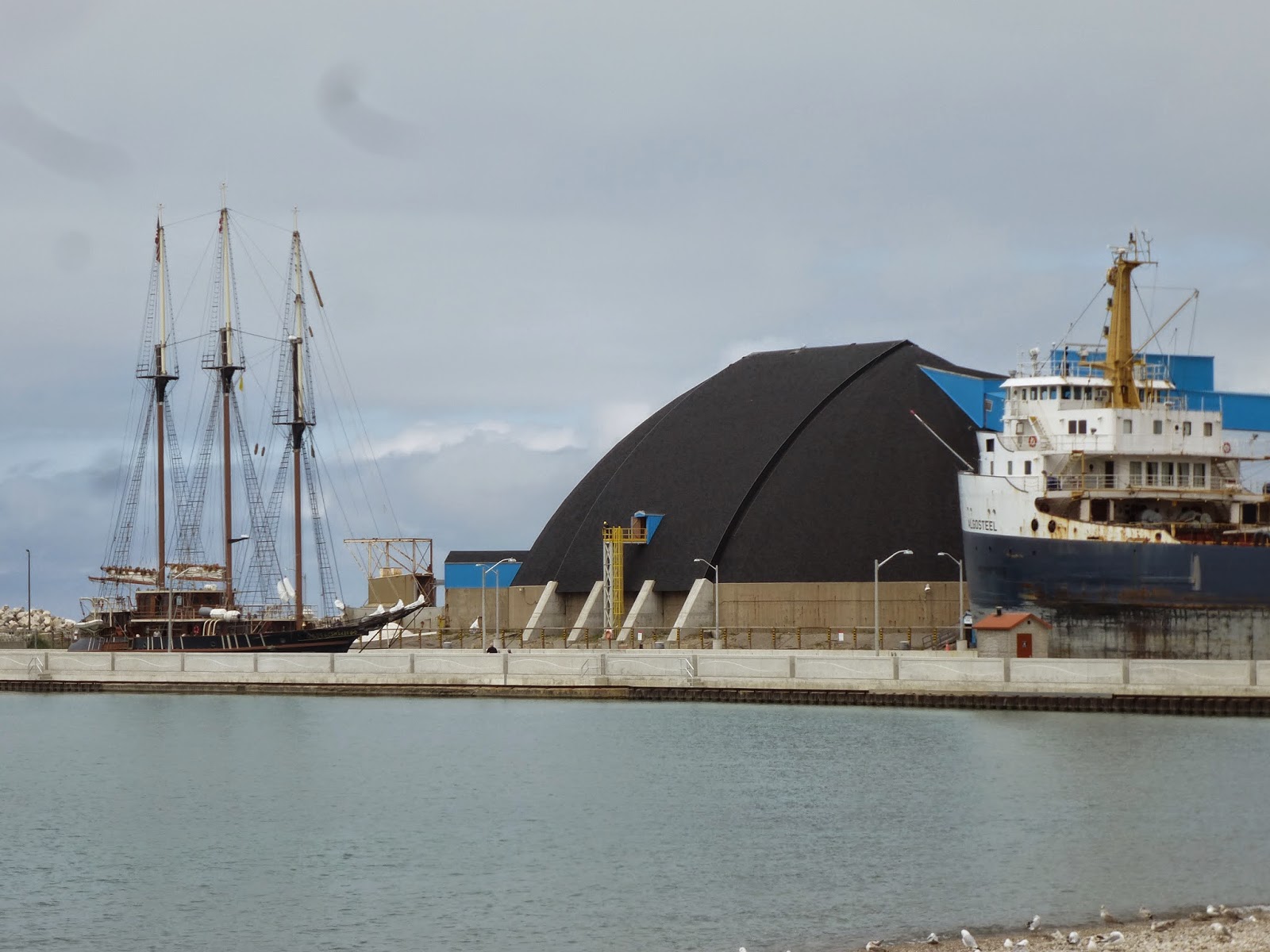 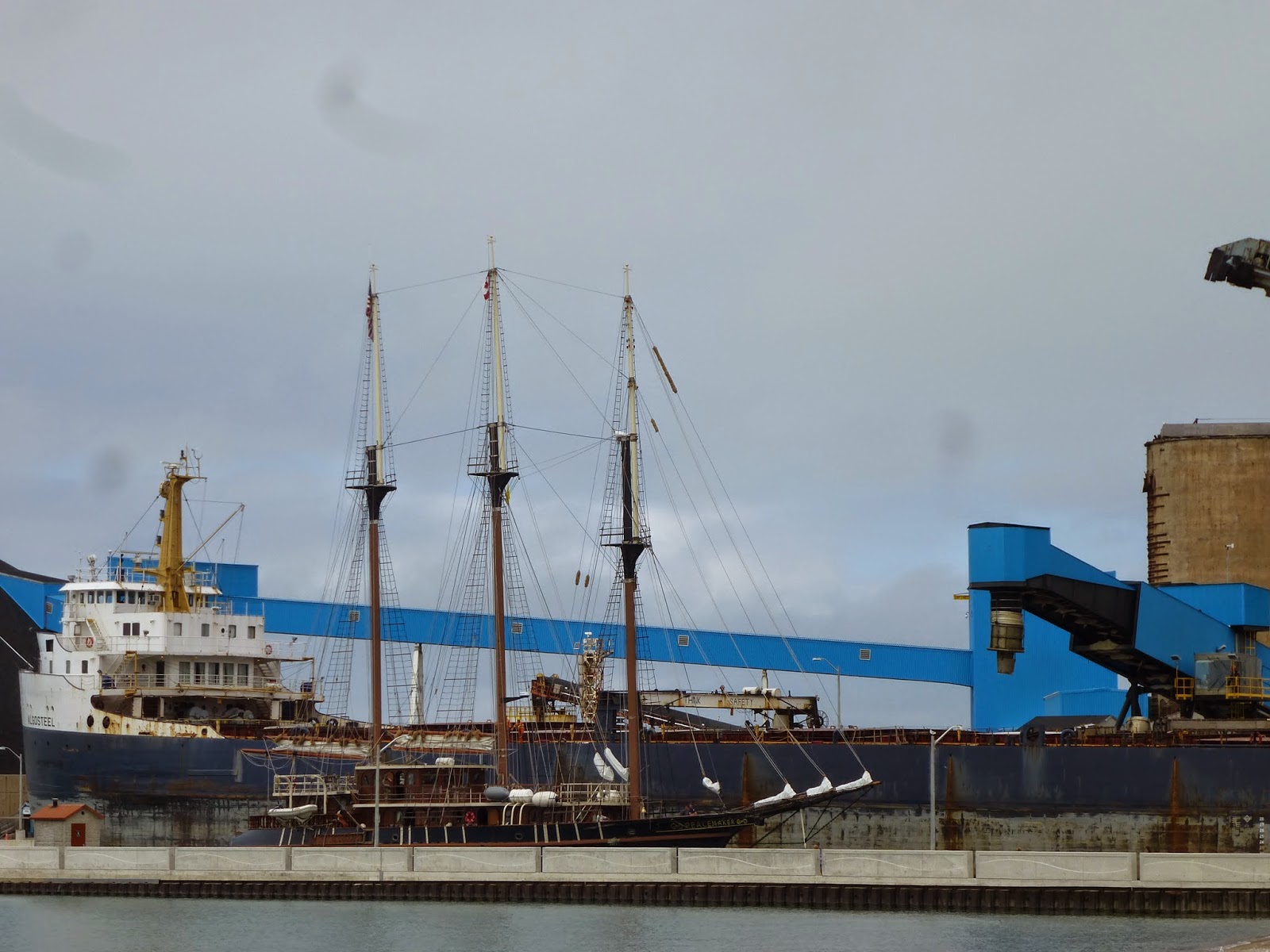 Getting back to the yard up the hill from the salt mine, here's a close shot of the battered old GP9 4001. I was not able to get shot from the sunny side, since that was on private property. This was about as close as I could get. 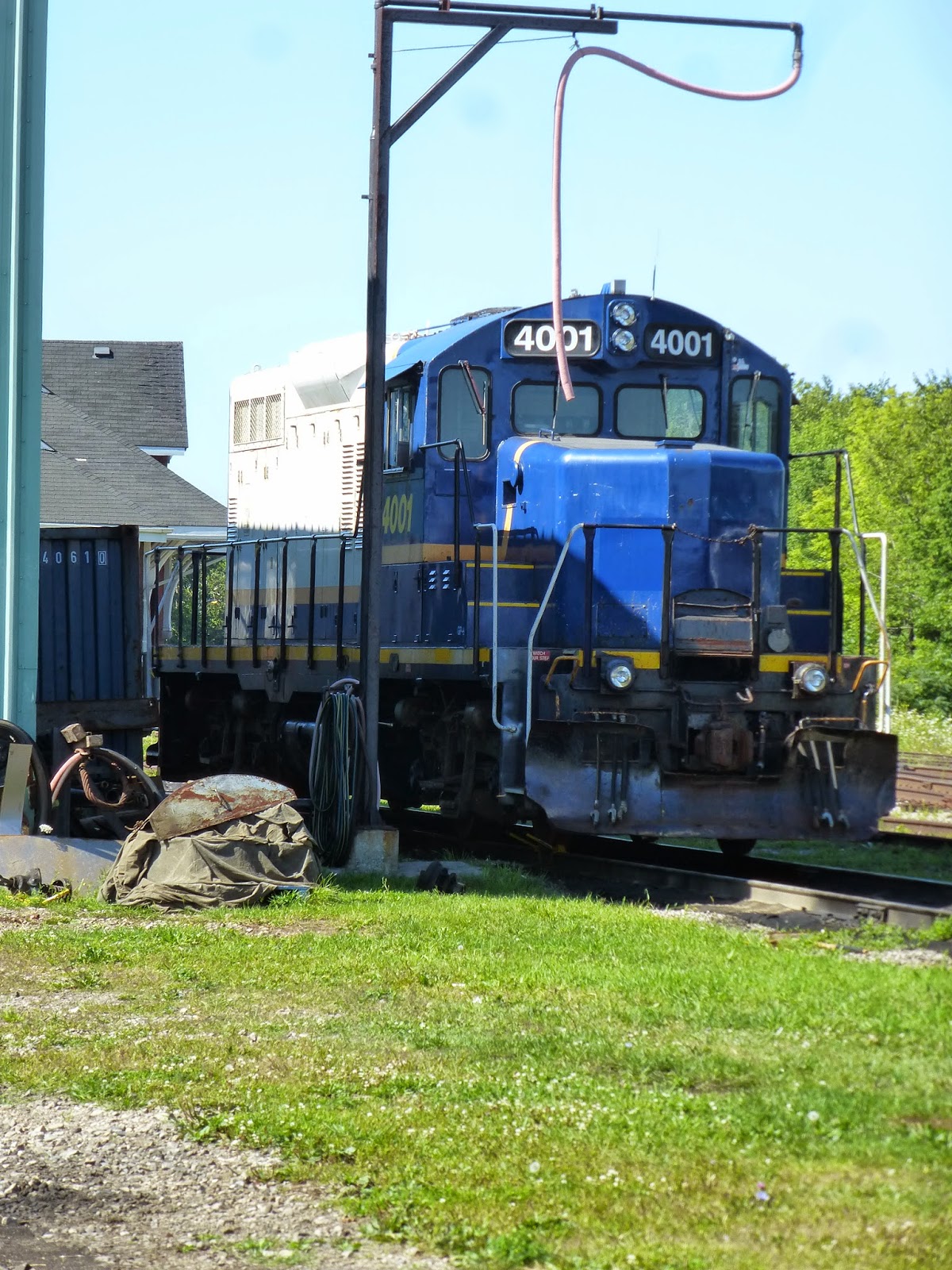 Here's a shot of old 4001 at the railway's servicing facility, taken from the old Centre Street station platform. I tried to get the signs in this shot, as well as the lone axle resting behind the geep. Here's a shot of 4001 with its former Rail America paint scheme. 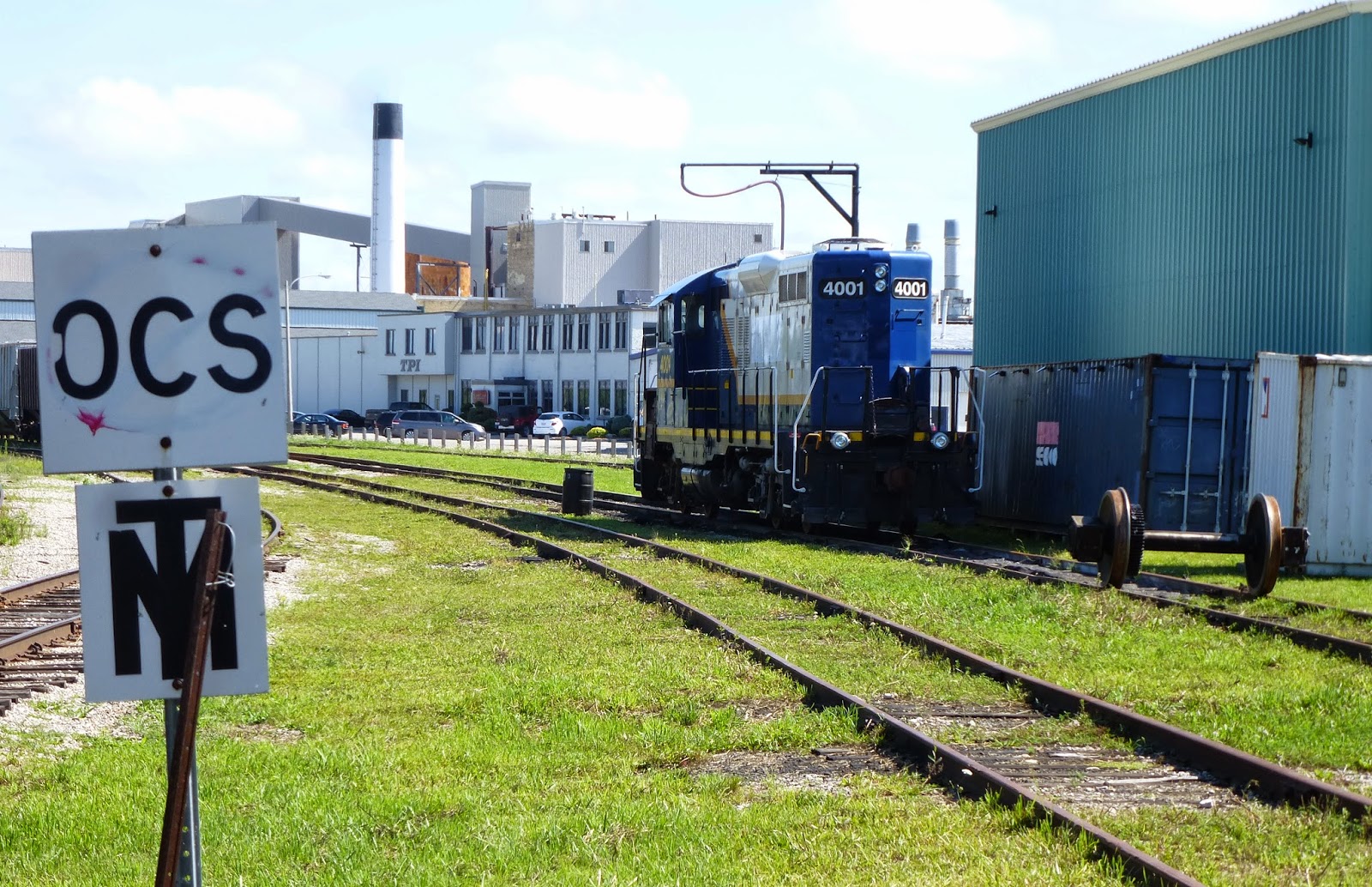 
I liked the look of this string of hoppers, due to the colours. It's a man-made rainbow. 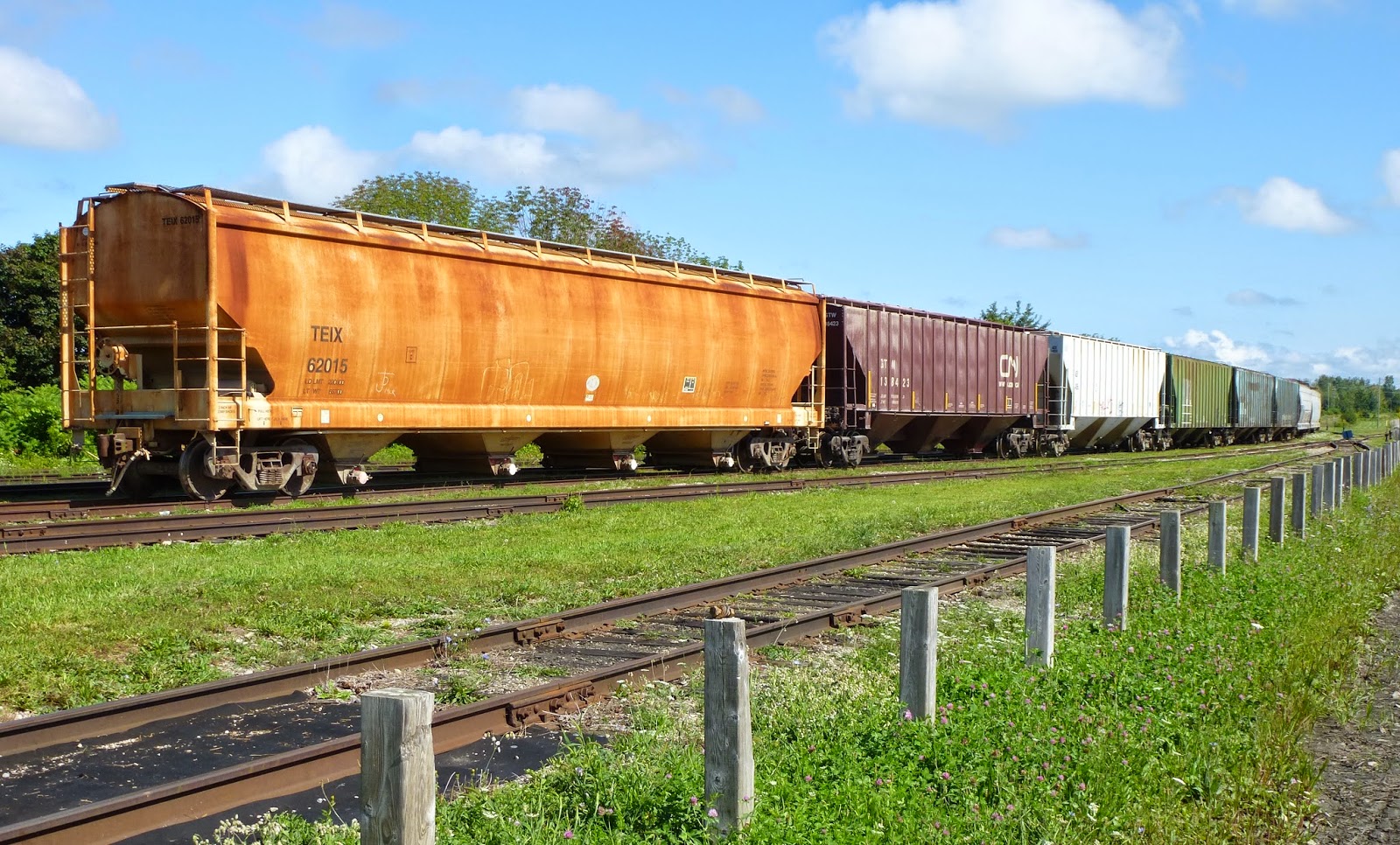 As I mentioned in my first post about Goderich, the city has a number of  preserved railway artifacts, including its two railway stations. Just west of the old CN station, a maintenance shed appears to need a little attention. Good for a model railway prototype, for those so inclined. 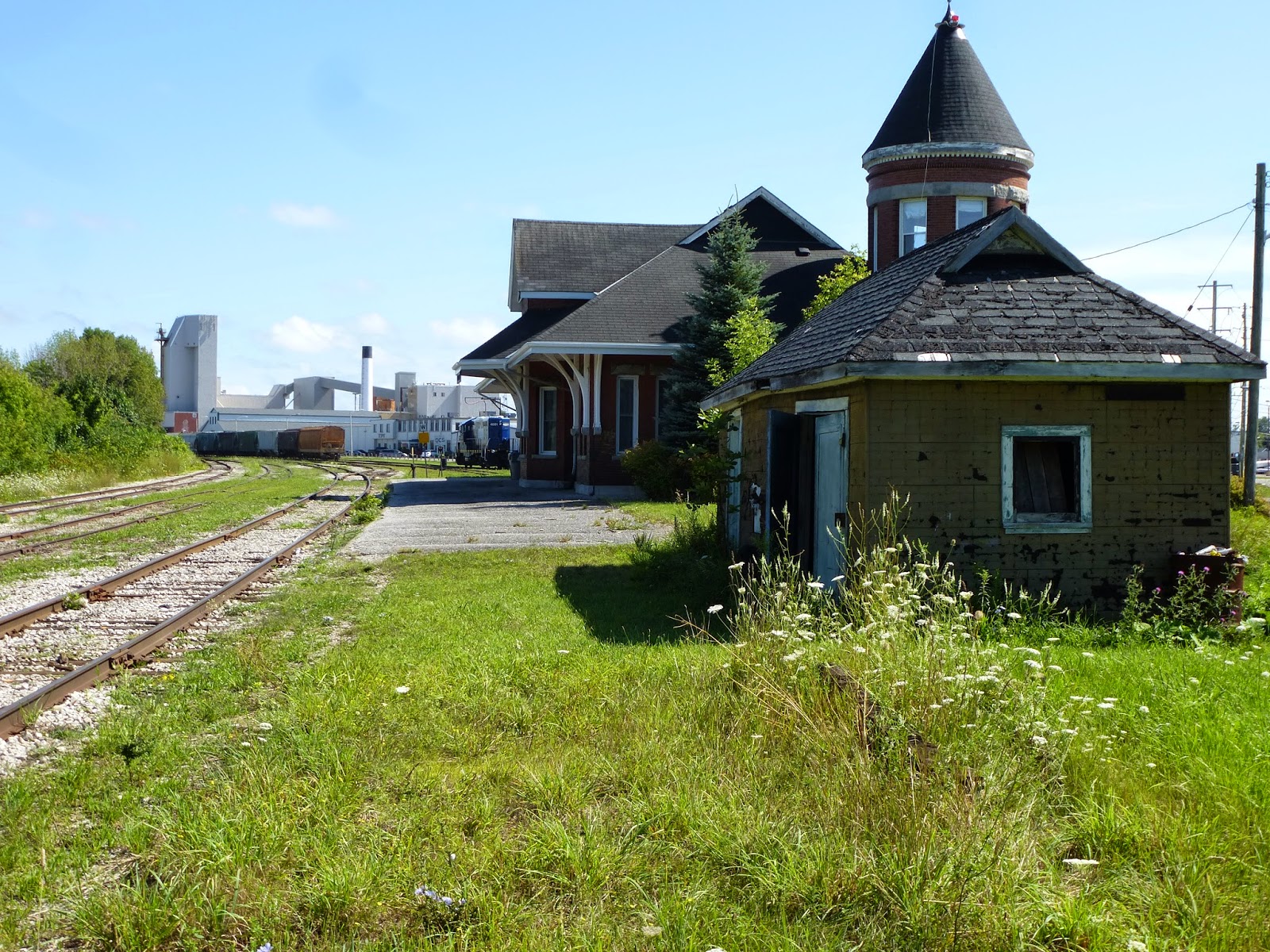 While in Goderich, I also managed to hike on an old CPR trestle, took in a preserved CP steam locomotive and captured shots of the old CPR station, which is being redeveloped. I will share photos and information on these relics in a future post.
﻿
Posted by Michael at Thursday, October 16, 2014

Nice documentation! My son and I saw the GEXR at work in Guelph a few weeks ago.

Haven't been, but Goderich is a cool nexus of trains and lakers. Algosteel loading looks to have just started, due to amount of hull normally-below-waterline that is showing.

Also, former location of a Champion grader factory. Now the site of a grade.

Thanks for the comments, gents. I'm glad you enjoyed this post. I always feel like I'm cheating the reader when there are no shots of operating trains. Steve, I'm glad you were able to see GEXR in Guelph. That's a great railway city, with the Ontario Southland operating there as well. Eric - Yes, the shot of Algosteel is a shot of the very beginning of the loading process. Fun to watch.

Hi Michael, I've challenged you to share your Railfan Five. Please don't feel obligated but I'd appreciate it if you would consider joining the challenge.

Thought I would give an update from some of the rumblings I have been hearing - Guy Annabel (running for councellor in college ward/Bells Corners) has been extremely supportive of expanding the O-Train towards Kanata on the Renfrew sub (Mike McGuire who is running for mayor has also pushed for this as a plan of attack on transit in the city). Anyway, Guy has planned a news conference for Wednesday morning at city hall to announce a new part of the expanded transit plan for the city which is expected to detail how an O-Train from Carp to Bayview station would look like. I expect that they will pinpoint potential stops ( have had had my own idea of where these could be over the last year now, so I am interested to see where they go with it), frequency of trains and potential expansion. Stay tuned as it looks like the decaying rail situation in the city is finally getting a bit more interesting.

Nice post; I'm always interested to read about ON shortlines. I think Old Time Trains had a pretty good post about the GEXR. It's worth checking out if you haven't.

Thanks for the tip, Bryan. I am fascinated by the GEXR. I will check that out.

Has anyone heard of the status of the Beachburg Sub from Quebec to Ottawa. I live in Woodlawn and have seen 2 large loaded rail line carriers heading towards Ottawa. I can find nothing in the media.

Thanks for the comment Simon. CN has successfully applied to have the line scrapped all the way to Nepean Junction so what you are seeing is the dismantling of the line up to that point.

Thank you Michael for the information. Another rail line carrier has just passed through Woodlawn going towards Quebec. It was empty and shorter than the previous ones so I assume the welded rail is all taken and they are working on the bolted sections?

I would assume the welded rail is gone, as I was told there was very little left on the line. I still have not gone to check out the situation. Something tells me I should before the rest of this line disappears.