More relics on the rails

My travels to southern Ontario this summer resulted in some interesting sites trackside, including a few run-ins with railroading history. It's always a good day when you capture a piece of the past, especially when these relics are becoming rare. I managed to snag a few notable relics. You can read my first entry about relics in this post.

The first relic I shot was located at the end of the line on CSX's Sarnia Subdivision, along the shores of the St. Clair River. This antique maintenance-of-way crane car was quite far from the parking lot where I was standing. There was no way to legally get close to the car, so I had to rely on my camera's zoom to get what I could. But the lighting was good and the view was mostly clear, minus a hydro pole. 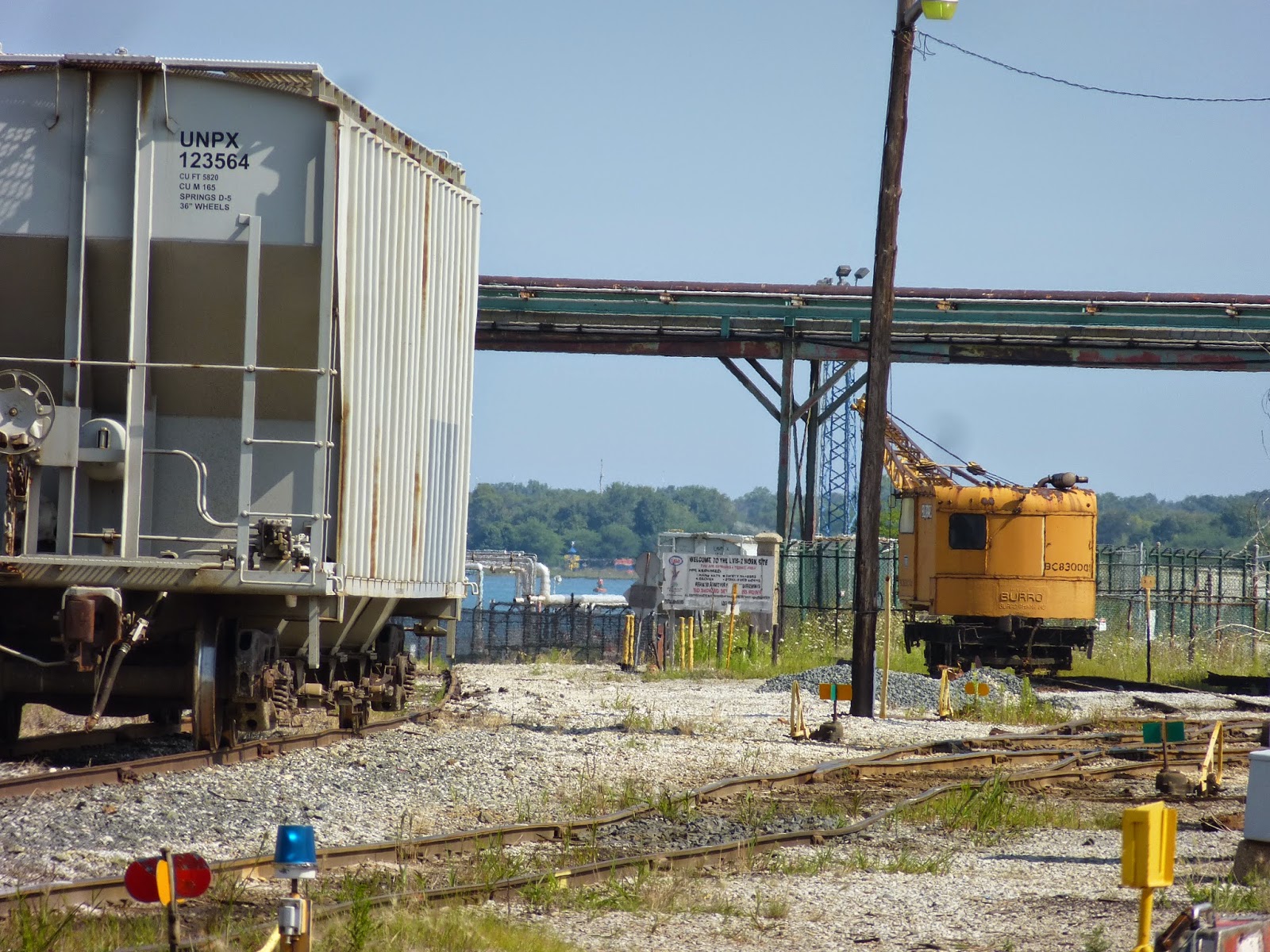 As you can see, the zoom was stretched to its limits, judging by the look of the tracks leading up to the old car. This old Burro crane is still clad in Chessie yellow. I have seen this car tucked away here a few times, but this was the first time I had a fairly clean view of the car. You can see the St. Clair River in the background and Michigan on the other side. This car is pretty close to where the old CSX rail ferry was located. This ferry service ended right around the same time the CN ferry stopped its operations. What's interesting about the old CSX ferry is that I didn't even know it existed until recent years.

Later on the same day (August 18th), I made my way to CN's Sarnia Yard and was able to catch the CN/CSX interchange as a string of cars was being delivered for pickup by two CSX GP38s in the yard. This train contained the second relic. Below is a long shot of the interchange making its way into the yard. Can you see the relic? It may not be obvious.

Here's a closer look. It's an old Family Lines System hopper car, still fully clad in its original livery. It may not be all that significant to some, but for someone like me interested in the convoluted history of CSX, it's an interesting holdover from the merger era. You can see a second hopper with the same paint, although it has been re-lettered for CSX. 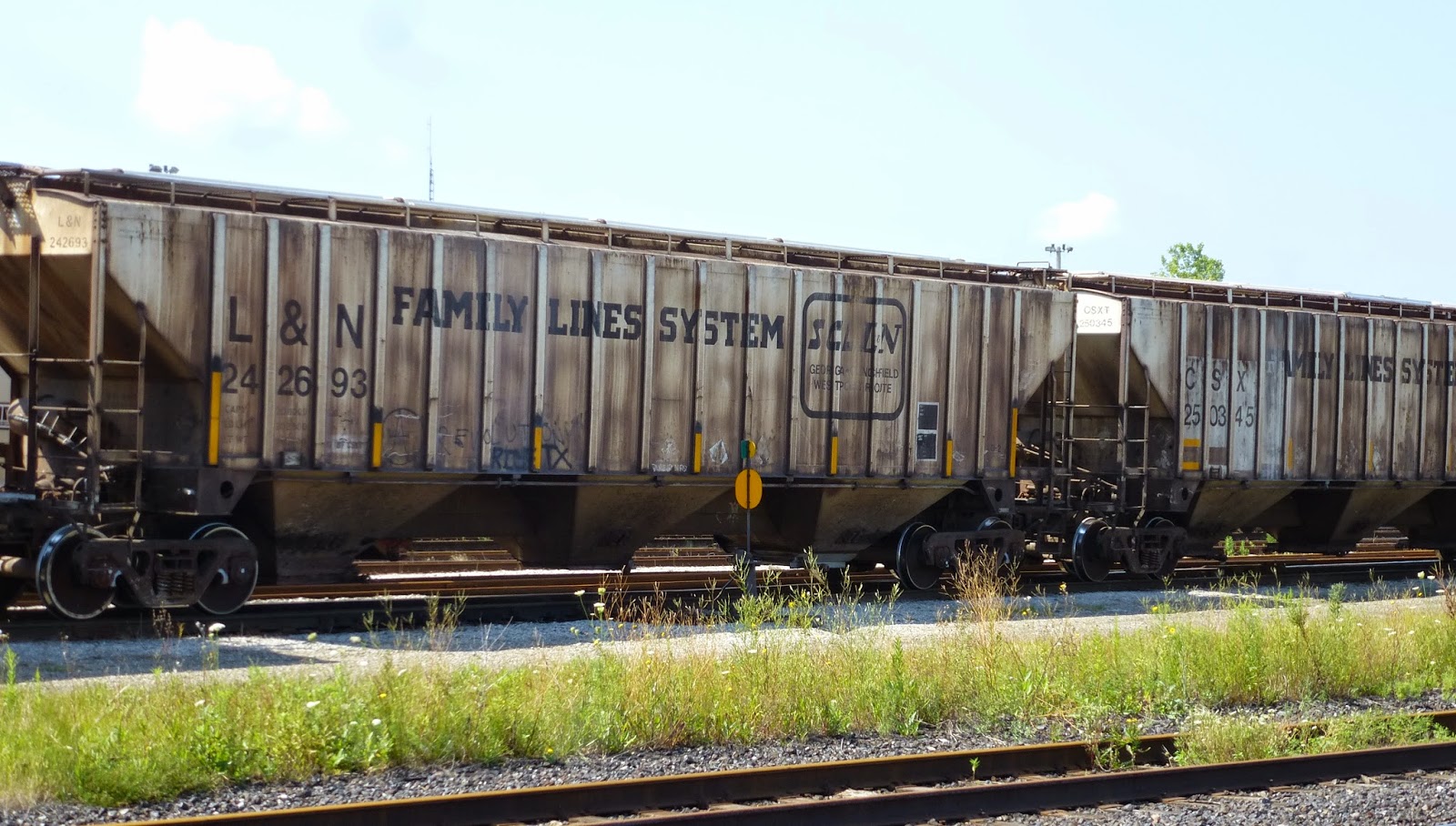 You can see the Louisville & Nashville lettering on the hopper and the all-encompassing logo to the right. Here's a closer look at the logo, below. 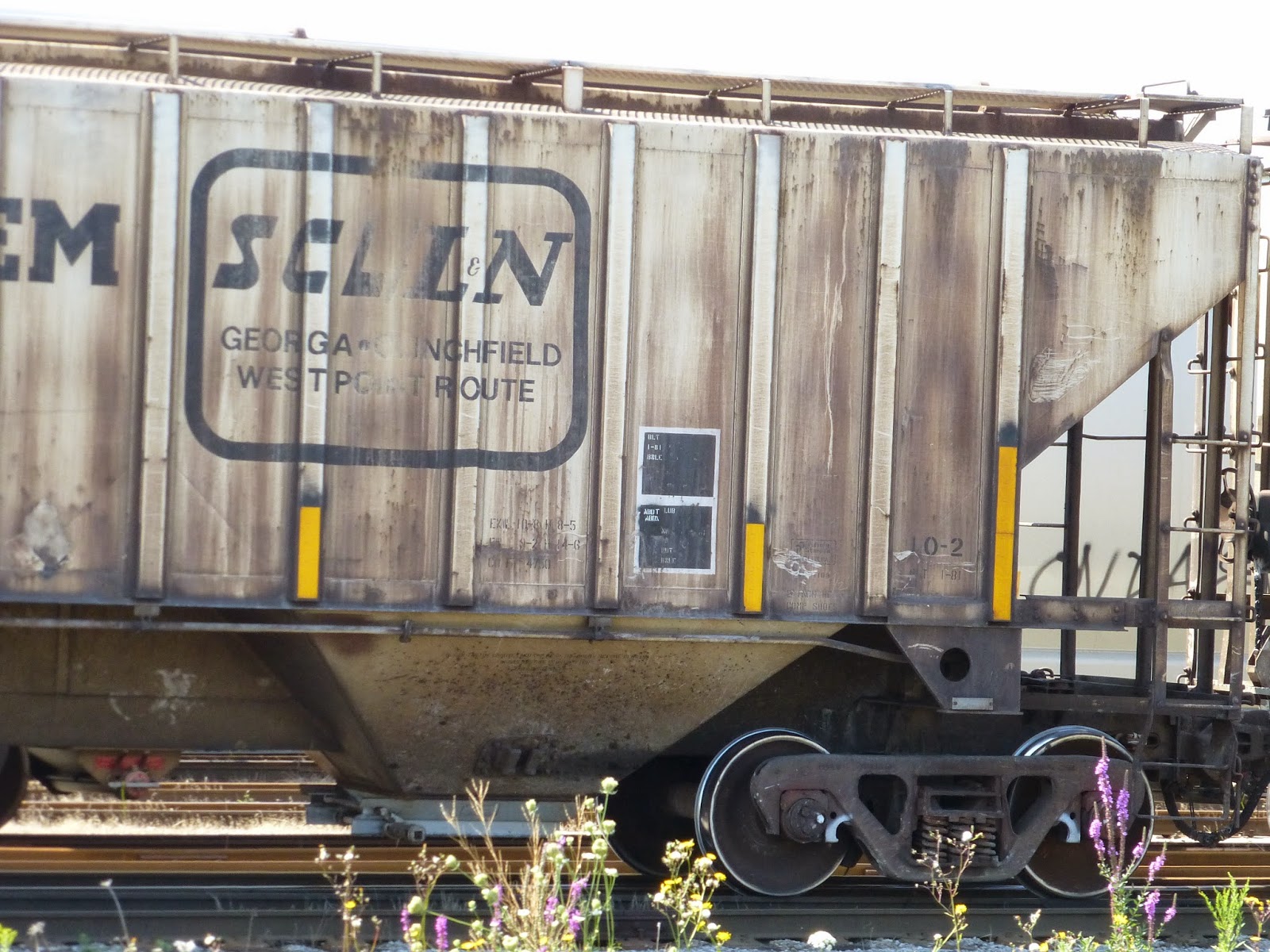 Family Lines System was one of the precursors to CSX. It is important to note that the system was itself not an actual railroad, but a common marketing scheme adopted by a number of allied railways, including the Seaboard Coast Line, Louisville & Nashville, the Clinchfield Railroad, the Georgia Railroad, the Atlanta & West Point Railroad and the Western Railway of Alabama (these lines were known as the West Point Route). You can see that all the railroads are represented in the logo. This entity was created in 1972 and lasted until 1982, when the Seaboard System was created. The Seaboard System itself lasted until 1986, when Seaboard and Chessie System were combined to form CSX. That's the simplest explanation. Technically, Chessie was brought into the CSX umbrella in 1987. I'm not sure I understand the specifics of how CSX, as we know it, came to be in 1986-87.

This next shot below isn't necessarily a relic, but more of an rarity or oddity. This is a manifest freight heading west toward the St. Clair River rail tunnel (I will have more to share about this train in another post). The middle unit pulling this train is CN 5550, an SD60F cowl unit. I only ever snagged one other cowl unit in my exploits around this yard. You can read about the other cowl unit I saw, a Bombardier HR616, here. This unit looks massive, with six axles and six safety stripes. 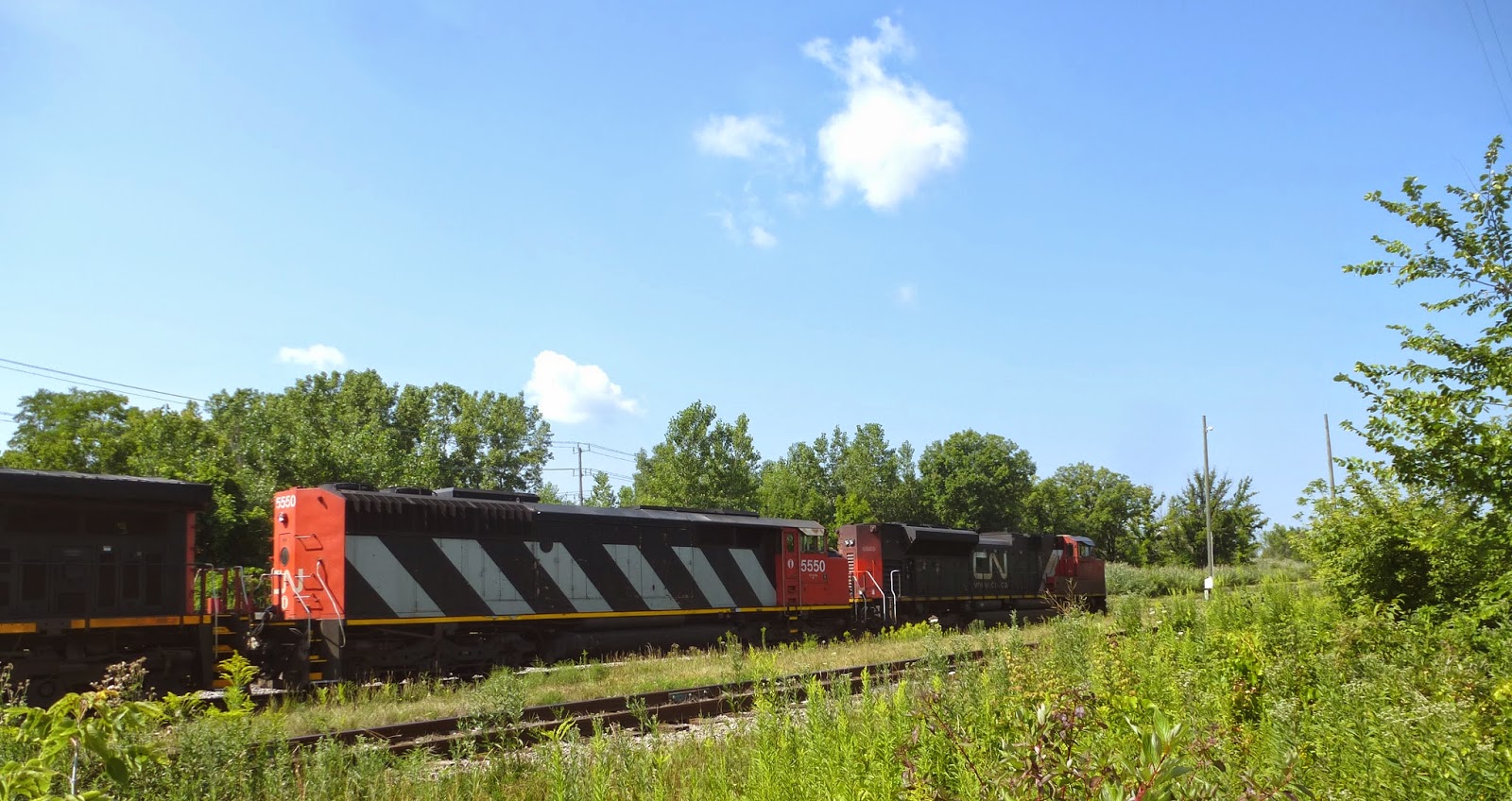 The final relic I found along the CN Strathroy Subdivision in Wyoming. Whenever I visit this area, I visit the tiny Via Rail station and wait for a passing freight train. I didn't end up catching a train but I did find this old loading ramp in the weeds. It appears that this ramp has not been used in some time. Still, it's interesting that pieces of the old track leading to this ramp still remain. You can see the main line to the left of the photo. 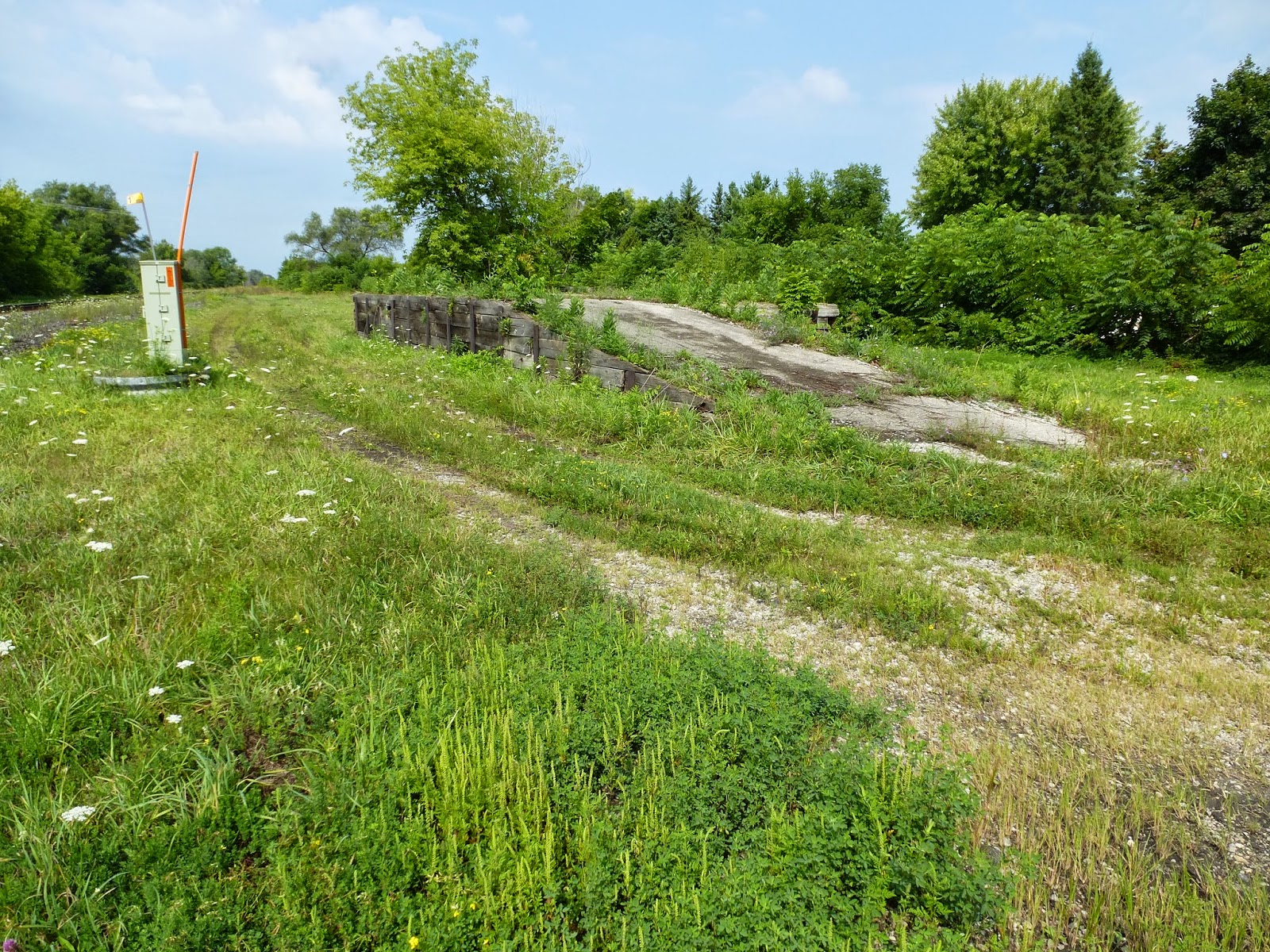 I was quite happy with some of these catches over the summer. As I mentioned already, anytime you can shoot some history, it's a good day.

Thanks for reaching out

I posted my email in a previous post and was happy with the messages I received from readers. I was happy to know that I have a good following from various points in Ontario and around Canada. Please feel free to contact me with any questions or comments you may have at hammond.michael77 AT gmail.com. One reader has reached out and will be featured as a guest blogger in the near future. He has already showed me some of his material and I am excited about sharing his photos and experiences. Stay tuned!

Nice angles, Michael. I too like those predecessor-road cars - a throwback to 'heritage' of the takeovers, much as Norfolk Southern acknowledged predecessor roads with their Heritage Fleet locomotives. One of my favourites was a B&O capitol dome covered hopper with CSXT reporting marks that I observed.

Nice snag of that SD60F. Talk about hard to find!!!

Thanks for the comments, gents. Eric, I'd love to see that shot of the B&O car! That is my favourite fallen flag railway! Many of those cars used to show up on the CSX Sarnia Sub. AJ - I didn't even realize what I had captured until I reviewed my shots. It was such a rush to catch this train. I was lucky to snag the cowl unit.

I love to see those fallen flag cars, Michael.

If you want to see cowl engines, come to Winnipeg. There are several SD60F engines making regular appearances. Long live the Draper Taper!

Drove home along that stretch of 401 that parallels CN near Joyceville Road-->Highway 15 - nada in the train dept.

Thanks for your comments, Eric and Steve. Steve - Some day, I will make it back to Winnipeg to see some serious cowl action. You're livin' the dream out there! Eric, thanks for sending that link. It brings back good memories of the Sarnia Sub in the 1980s and 1990s.

Looks like I missed 589 again this morning. Oddly, I could hear the whistle in the office minutes ago at 8:44am which was the first time I've heard it at work. For other rail fans, I can confirm it going between Greenbank and the 416 at 8:45 this morning.

I like the old loading ramp shot. Captures the feel nicely; I wonder how it would look in B&W.

Thanks for your comment, Bryan. I had trouble taking a shot of that ramp in a way that did it justice. Maybe B&W is the key.

If you ask the clerk at the CSX office and get lucky, someone might let you roam around their property, but always ask permission first.M