Eric Gagnon of the Trackside Treasure rail blog has been a great influence on the Beachburg Sub. His blog, as most of you know, is one of the most interesting railway forums you will find online. Many of my own readers have drifted over from Trackside Treasure, which really helped establish this blog early on. Eric recently issued a Railfan Five challenge that asked his readers (of which I am a regular) to post five photos they feel tell their story as a railfan. You can read his own Railfan Five post here. Another blogger, Steve Boyko of the equally excellent blog, Confessions of a Train Geek, posted his Railfan Five. Steve asked me to take up the challenge, so here are my five.

I should mention that there are a few prints of early train photos that I do not have at the moment, which would tell my railfan story more a little more clearly, but those prints are my sister's house. Until I find those prints and scan them, my story will remain partly incomplete for now. 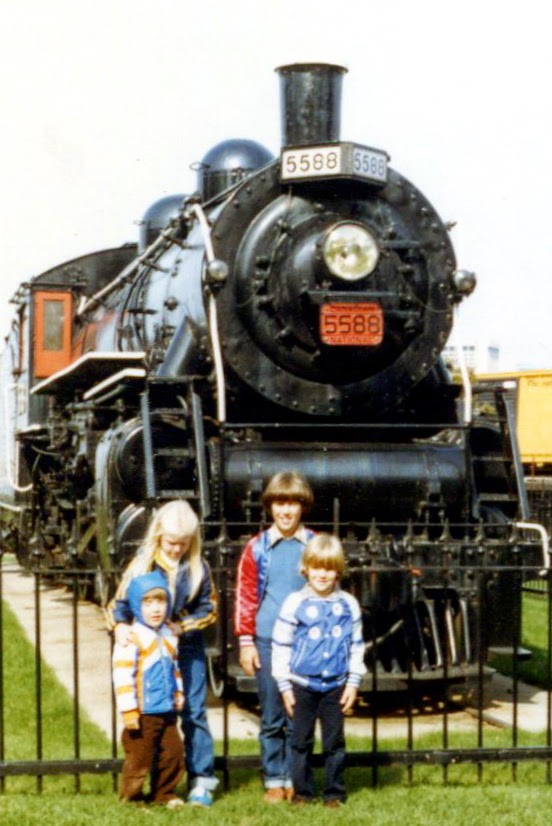 This photo is (to my knowledge) the earliest family train photo that features me in it, likely taken about 1981. I am about 4 years old in this photo, I think. I am the little guy bottom left. The guy beside me is my brother Marc. My big sister Jennifer is behind Marc. The girl behind me is a friend of the family, also named Jen. This photo was taken in Windsor, Ontario in front of Canadian National steam locomotive, the Spirit of Windsor. My journey as a railfan began in Windsor, since my grandfather Paul-Émile worked there as a rolling stock mechanic for the Canadian Pacific. He worked for years at the Chapleau, Ont. servicing yard before transferring to Windsor in the 1960s. He took me aboard my first locomotive and often saved his back issues of CP Rail News. He was a big influence on my love of trains. As I mentioned previously, all my uncles worked on the railway at one point, as did my dad. I grew up with a fascination with trains, which was further fuelled by a gift of an old HO scale train set, given to me by my uncle. I still have many of the pieces of that set. 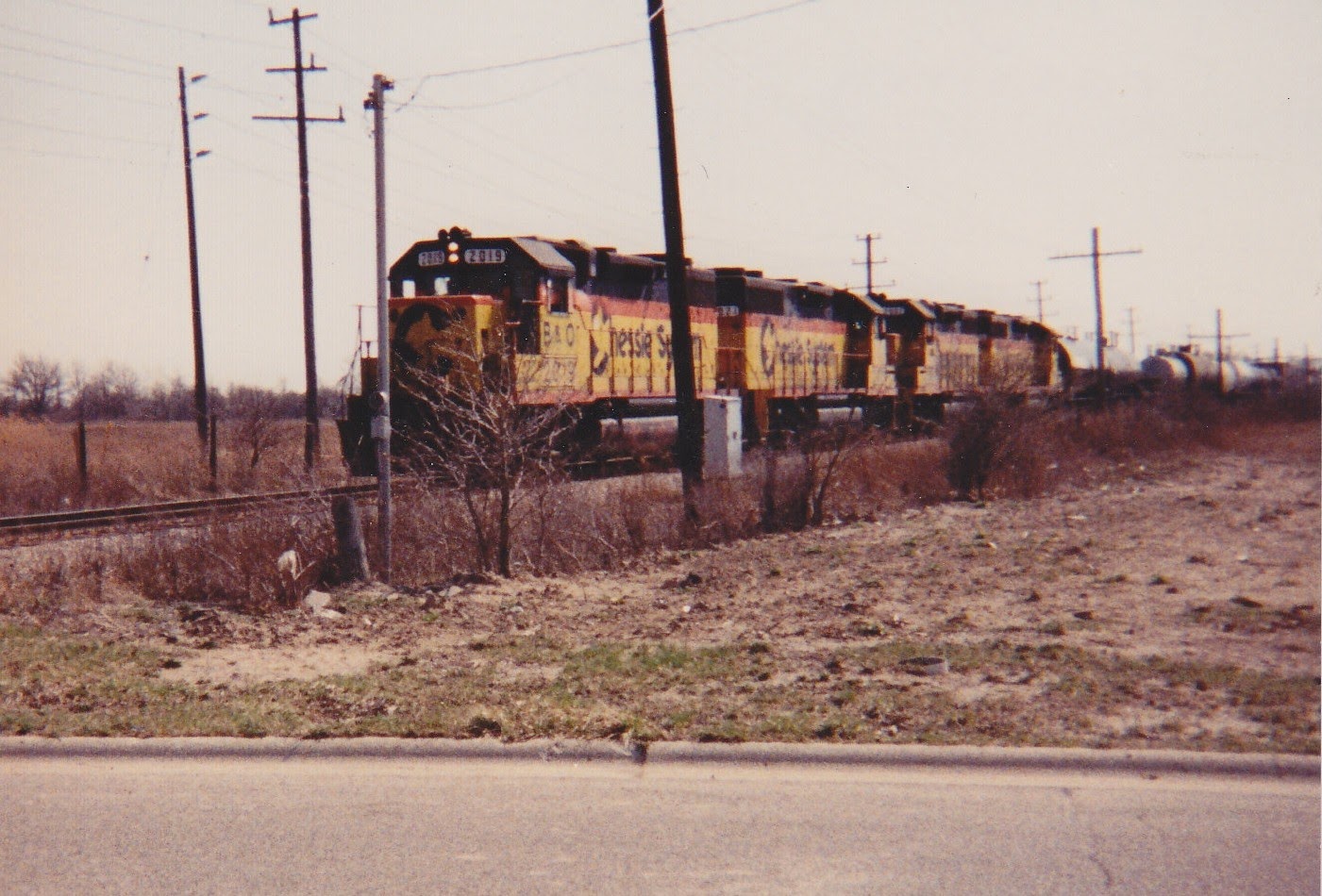 This next photo, which I have shown on this blog before, was taken in the spring of 1991 at the St. Clair Boulevard crossing in Corunna. I was 14 years old when I decided that I would start taking photos of trains. I had this pocket-sized instant camera with no flash that I used to take with me on my bike as I rode around Corunna, Ontario, my hometown. I was lucky that my house was located a short two-minute bike ride from the tracks. Many of my photos didn't turn out, due to the limitations of that camera, but I still sometimes ended up with some decent shots, although the camera almost always washed out the sky! Through my early teen years, I quietly pursued this hobby until I abandoned it, due to the other teenage concerns, like fitting in. This has been a common thread in my life. I've always been fascinated by trains but I haven't always pursued the hobby. 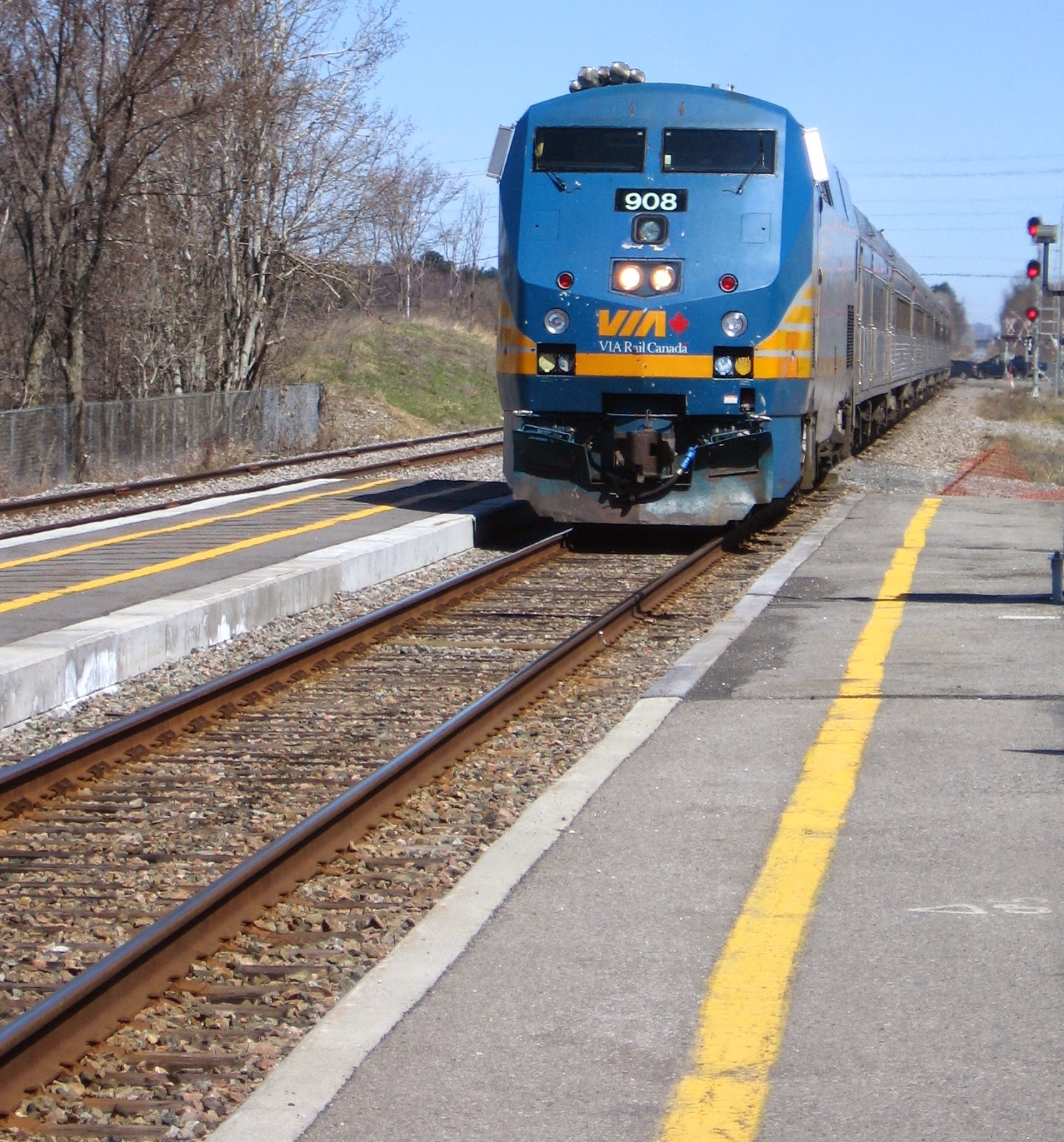 After stints living in Peterborough, Ont. and Kitchener, Ont., I returned to Ottawa in 2009 and married the love of my life. We moved into our first home and began our life together. It was at this time that I took out my old HO scale trains and began thinking about railways again. I scanned my old railway photo prints from the early 1990s. I purchased the odd issue of Trains Magazine and found myself reading blogs like Trackside Treasure and Confessions of  Train Geek. In 2012,  I began taking my digital camera to Via Rail's Fallowfield Station to take photos of trains for the first time in years. This is how I reignited my passions for trains. This shot above was taken in April 2012 and it's Toronto-bound Train 55 pulling in to pick up passengers. There's nothing really special about this shot, but it's symbolic of my entry back into the fray, so to speak. 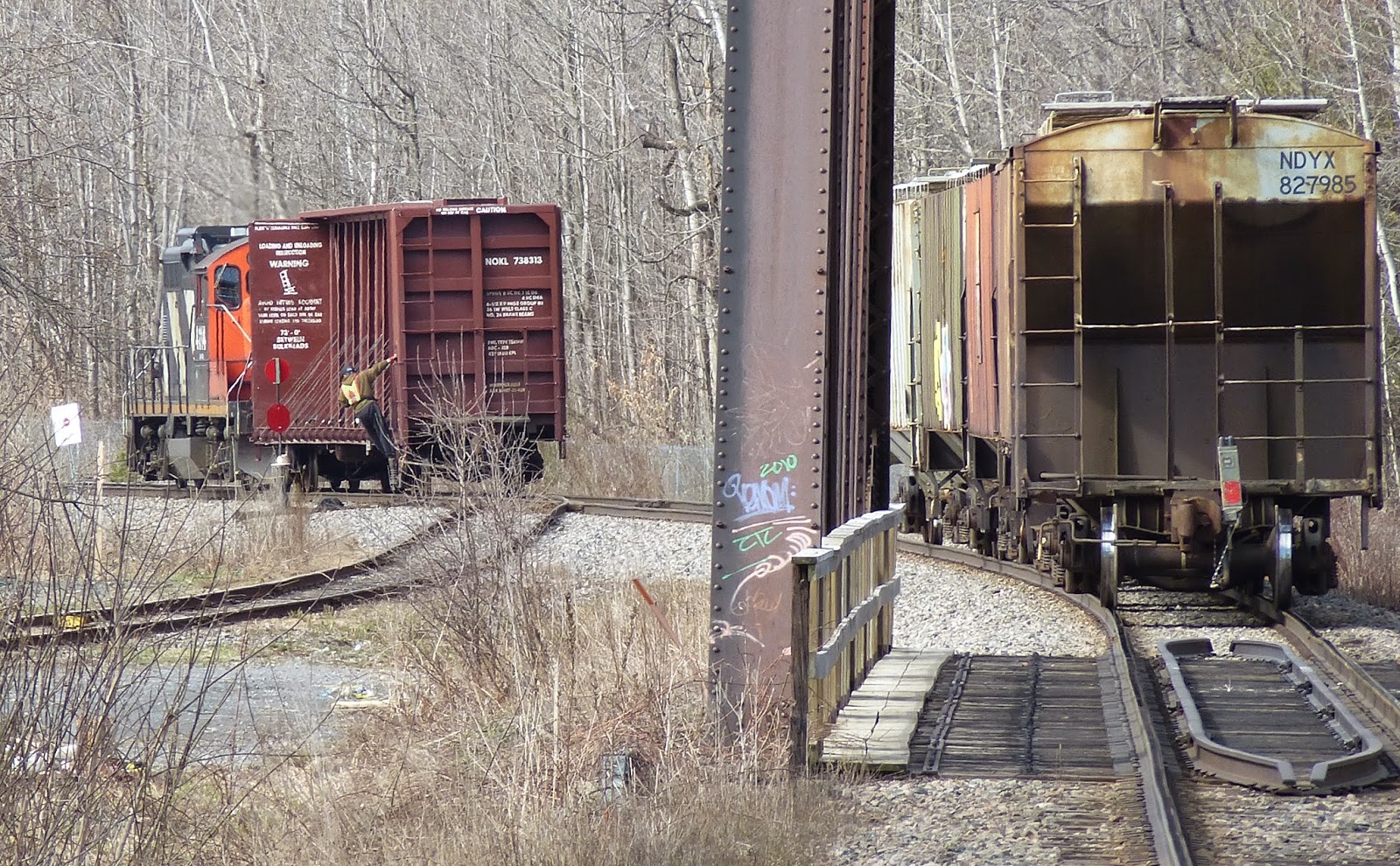 This shot was taken earlier this year, in the spring. It's Train 589, switching Kott Lumber near the Jock River on the Via Rail Smiths Falls Subdivision. This shot is special because it marks the first time I caught this train. I also think it marks a transition in my photographs. I have become more serious about capturing compelling images of local railways, which has brought me to new places trackside. Despite the dearth of railway activity in Ottawa, I have found more than enough to keep me interested and keep me writing about trains. I have been really lucky to have learned from other bloggers and benefited from a supportive railfan community out there. In the last few months, I have discovered an entire community of local railfans, which has only strengthened my resolve to keep blogging. This blog has exceeded all my expectations. 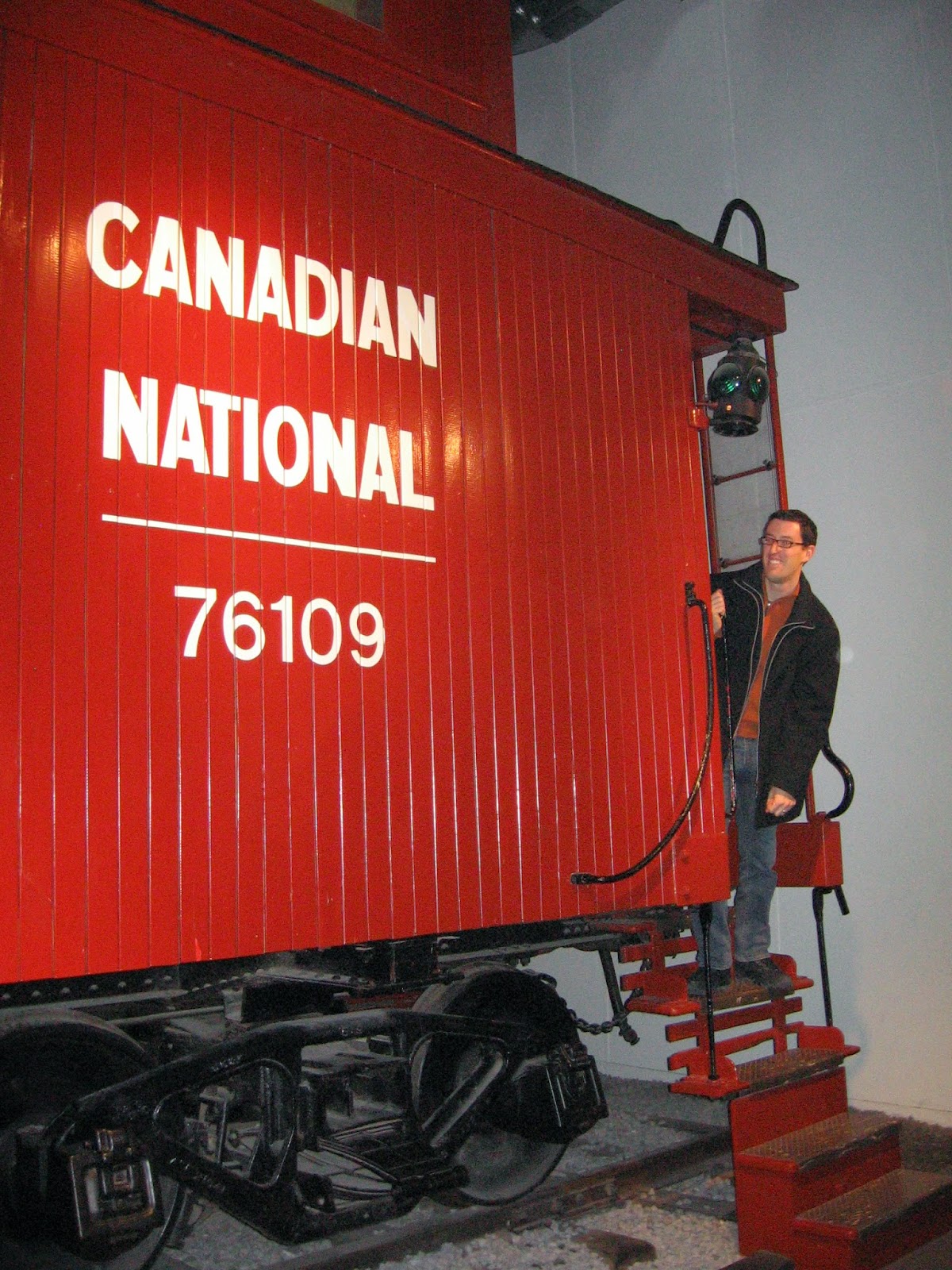 At the end of the day, I'm just a railfan. I'm sure some would call me a foamer, which is fine with me. No longer worried about what people think of my hobby, I have allowed myself to pursue the hobby trackside whenever I find time. Railways have a long history in my family and it's truly in my blood. This shot is me at the Canada Science and Technology Museum in Ottawa on the back of an old CN wooden caboose. This brings me to my final point. To be a train geek, you need a supportive family. My wife humoured me and took this shot. She continues to humour me and allow me to indulge in my hobby. And it's paying huge dividends. My little girl, not three years old yet, recently asked to see my "choo-choo" pictures on my computer. She then informed me that "I love choo-choos." And so, the tradition continues.

I now open up this railfan five challenge to my readers. I encourage you to read Eric Gagnon's original Railfan Five post (see link above). If you want to share your story in five photos, feel free to contact me and I will be glad to post your story and photos or link to your Flikr site. I will also be donating to the Bytown Railway Society, as part of my participation in this initiative. Thanks to Eric for coming up with this idea and thanks to Steve for issuing the challenge.

i know it's 8 years later but i'm liking the idea of the 5 personally-significant photographs challenge & would like, besides, to send you a coupla links to my Flickr stuff: how do i contact you? here? or do you have an E-mail address i can use? do let me know, as i think i have some photos you'd be entertained by (lots on the Prince Of Wales bridge, for instance, & Walkley after the ice storm'98)...